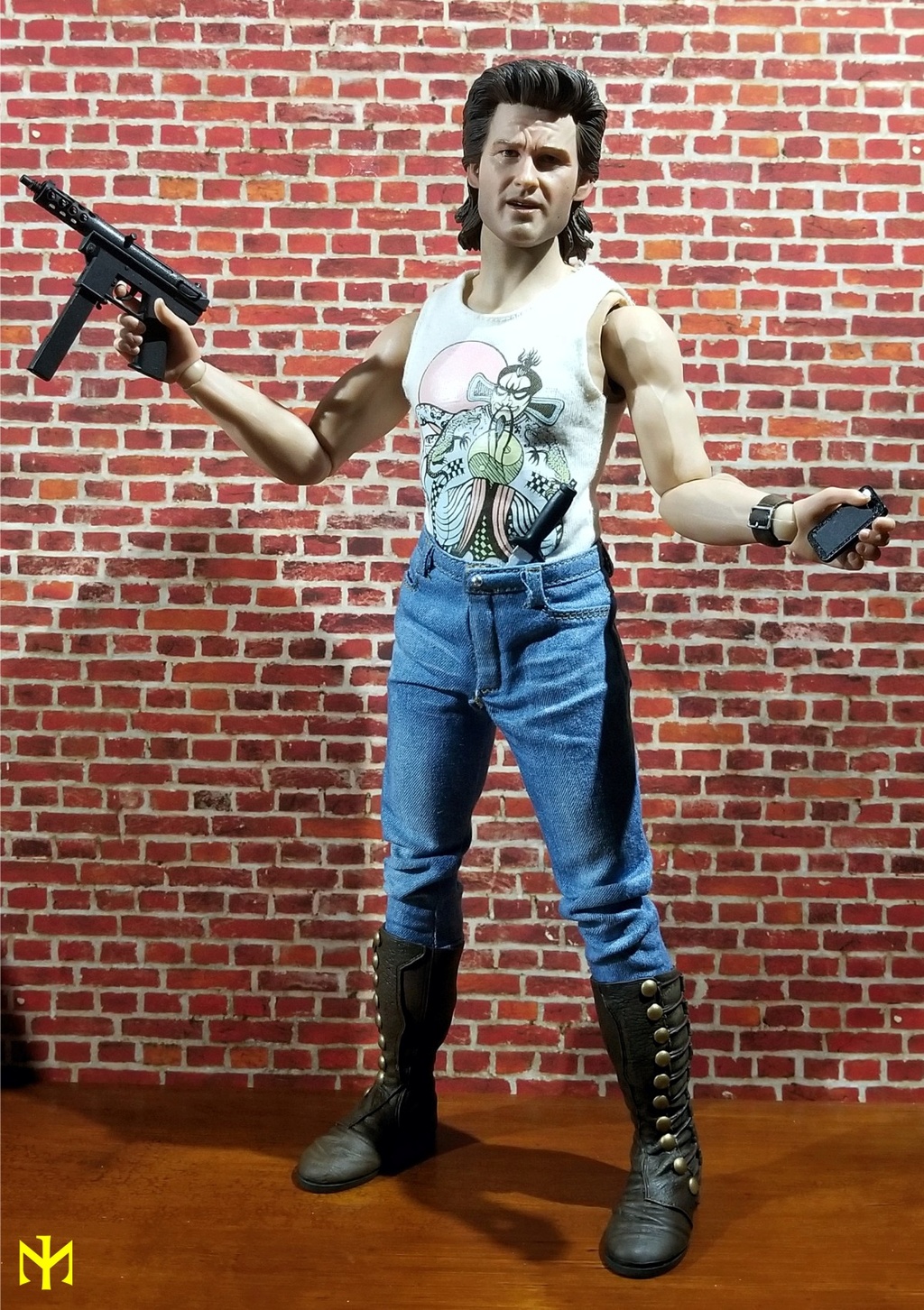 It seems like an eternity ago Sideshow announced that it will be producing a sixth-scale figure of Kurt Russell as Jack Burton from Big Trouble in Little China. The goofy but entertaining film seems to encapsulate some of the more likeable features of 80s cinema, as does its protagonist, who was played by an actor once almost cast as another lovable scoundrel, Han Solo. This is Sideshow's second Kurt Russell figure, following in the wake of their Snake Plissken (you can find Michael Crawford's fair review of it HERE). As the first in-hand photos of the new product became available, there was much disappointment among collectors over the way it turned out. I did what I could to hang in there, and am rather pleasantly surprised. I have come to the conclusion that the final product is not substantially worse than what was shown in promotional images and, despite various problems, is a good representation of the character. That said, much could have been done differently. 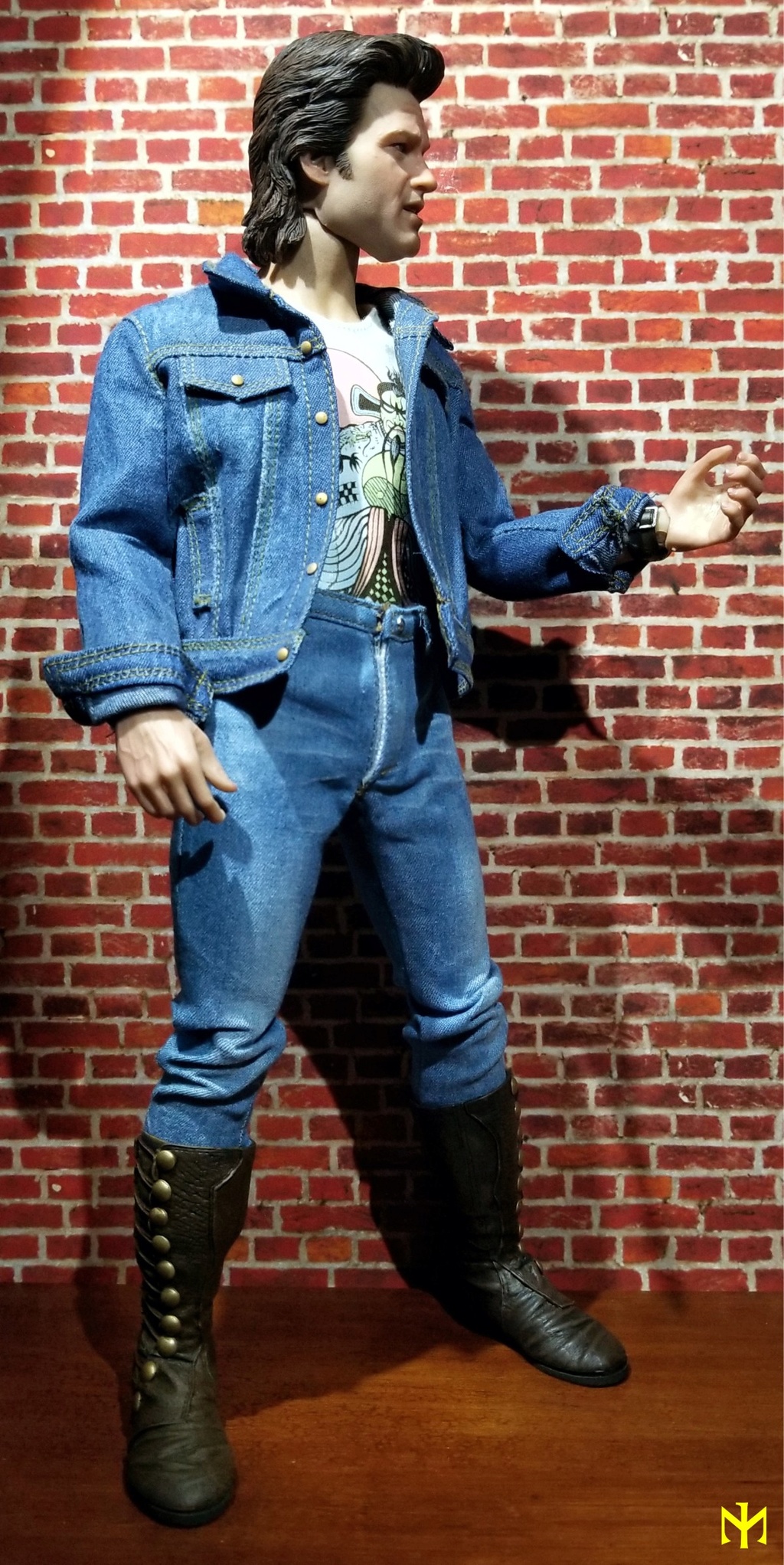 The figure comes in a basic true shoebox-type container with a fully removable lid. Unlike many other products, the box is elaborately decorated on all sides with colorful graphics, including images of both the Jack Burton and revolting guardian creature figures that are contained within. Inside the box are two plastic trays, each with its own transparent lid. The top one contains Jack Burton and some of the accessories, the bottom one contains the guardian, the stand, and other accessories. The two trays are wrapped by a wide cardboard cigar-wrapper band held together with tape, which needs to be undone. Otherwise, everything is completely collector-friendly. Without being particularly mind-blowing, the packaging is unique, attractive, and does its job. Added bonus: the box is somewhat smaller than those for most action figures in this scale (about 3.5 x 7 x 14 inches or 9 x 18 x 36 cm). 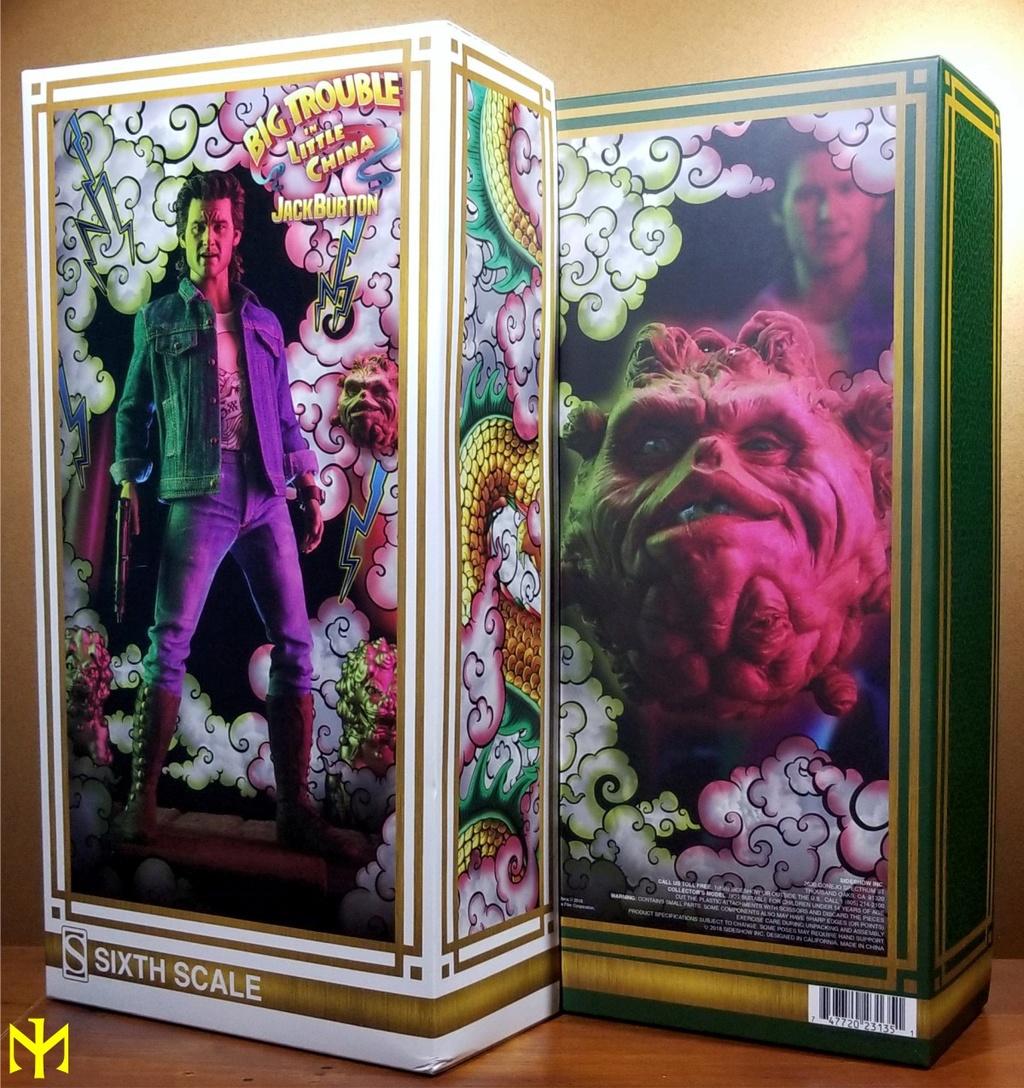 The sculpting of the figure and its accessories is very good (if at times just a little on the soft side), and represents an improvement on the production quality of Sideshow's Snake Plissken. For example, the hair strands are considerably finer, and so is the texturing of the skin. There are also plenty of wrinkles and moles and other natural details on the face (including the busted lip), finely sculpted veins on the arms and hands, and plenty of such detail on the non-human guardian figure. There are aspects of the design that are questionable: the hair around the face was sculpted separately from the hair on the rest/back of the head, and if you look carefully, you can detect the joint easily enough in the hairline; similarly with the seam between the two halves of the guardian. More obviously, the choice of hair style (it changes slightly throughout the film, due to circumstances) and especially the expression are not necessarily the best, depending on one's expectations. I would have preferred a more smug or smirking look myself, but it cannot be denied that Jack Burton had plenty of occasions for a concerned and confused look like the one chosen for the facial expression here. This is a legitimate choice, though perhaps not the most popular or recognizable. Look at it with the right shadows, and you will realize the sculpt is almost perfect; I think perhaps they made the back corners of his jaws a little too massive, but that is the only inaccuracy I can put my finer on -- if I am right. The hands are made of relatively soft plastic, which is a good thing in my book, but I wish all the fingers had been made separate. The soft plastic boots are also very nicely sculpted and textured. 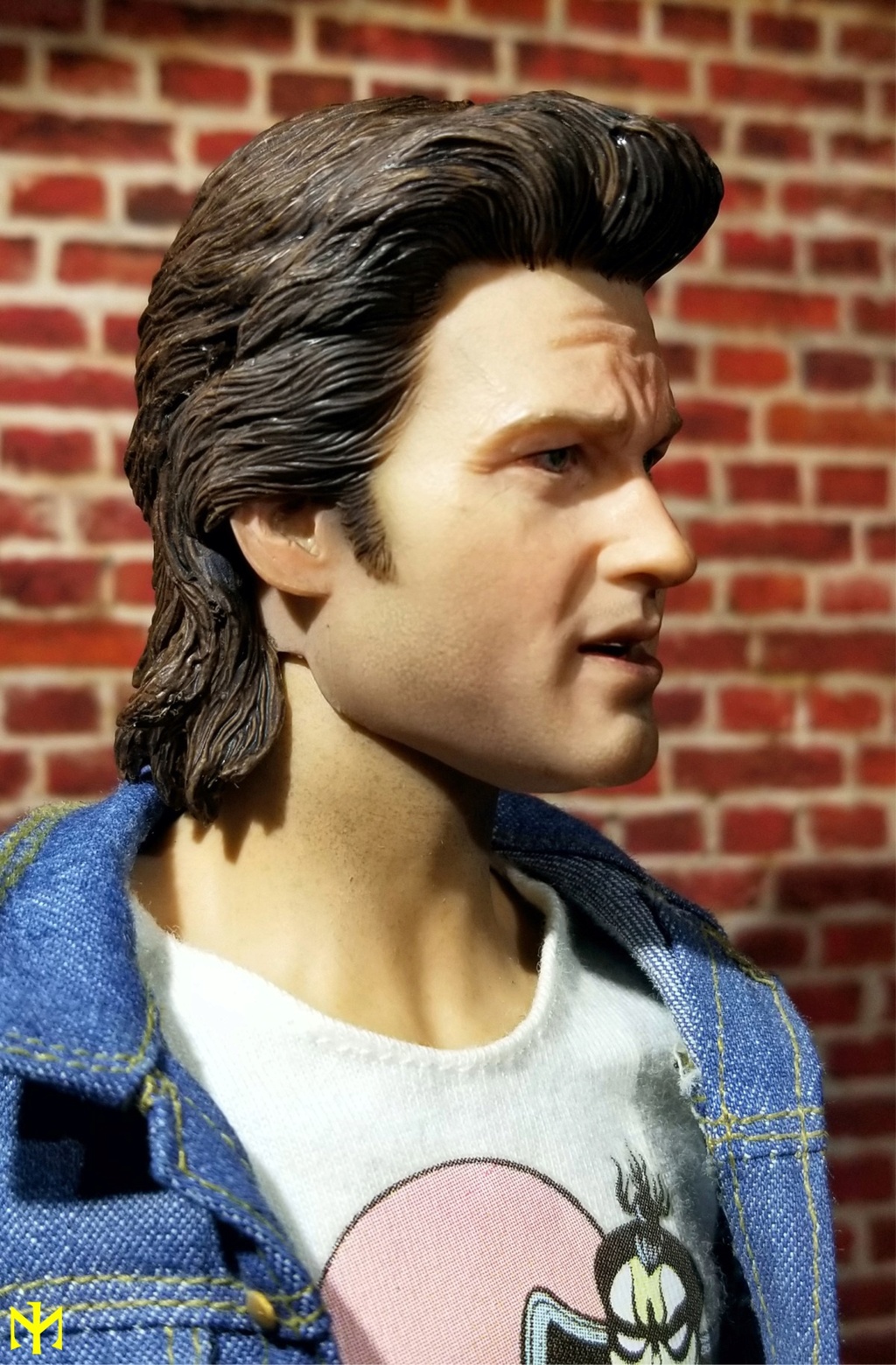 Like the sculpting, the paint work is good, but not perfect. However, it might be that whereas the sculpt suffers from production decisions, the paint suffers from the execution. That said, there is plenty here that is done right: the eyes look glossy and moist, the strands of hair are given some nuances of brown, there is a little bit of light coloring on the face, the neck, and veins on the arms. There is some weathering on the gun's magazine, and the whole thing looks like dull metal; the watch face looks near perfect given the scale; the boots and the guardian were given a wash that makes them look more realistic. On the other hand, Jack Burton's eyes look a bit too bloodshot to me, some of the guardian's multiple eyes are not painted very precisely, and I can't help but feel that the eyebrows are painted in so light a color that they detract from the realism and recognizability of the face. Then there are some shinier bits in the hair -- some of them appear to be on purpose, but others might be surplus glue from putting together the head along the seam in the hairline; I also found some unexpected shiny spots on the otherwise matte arms. 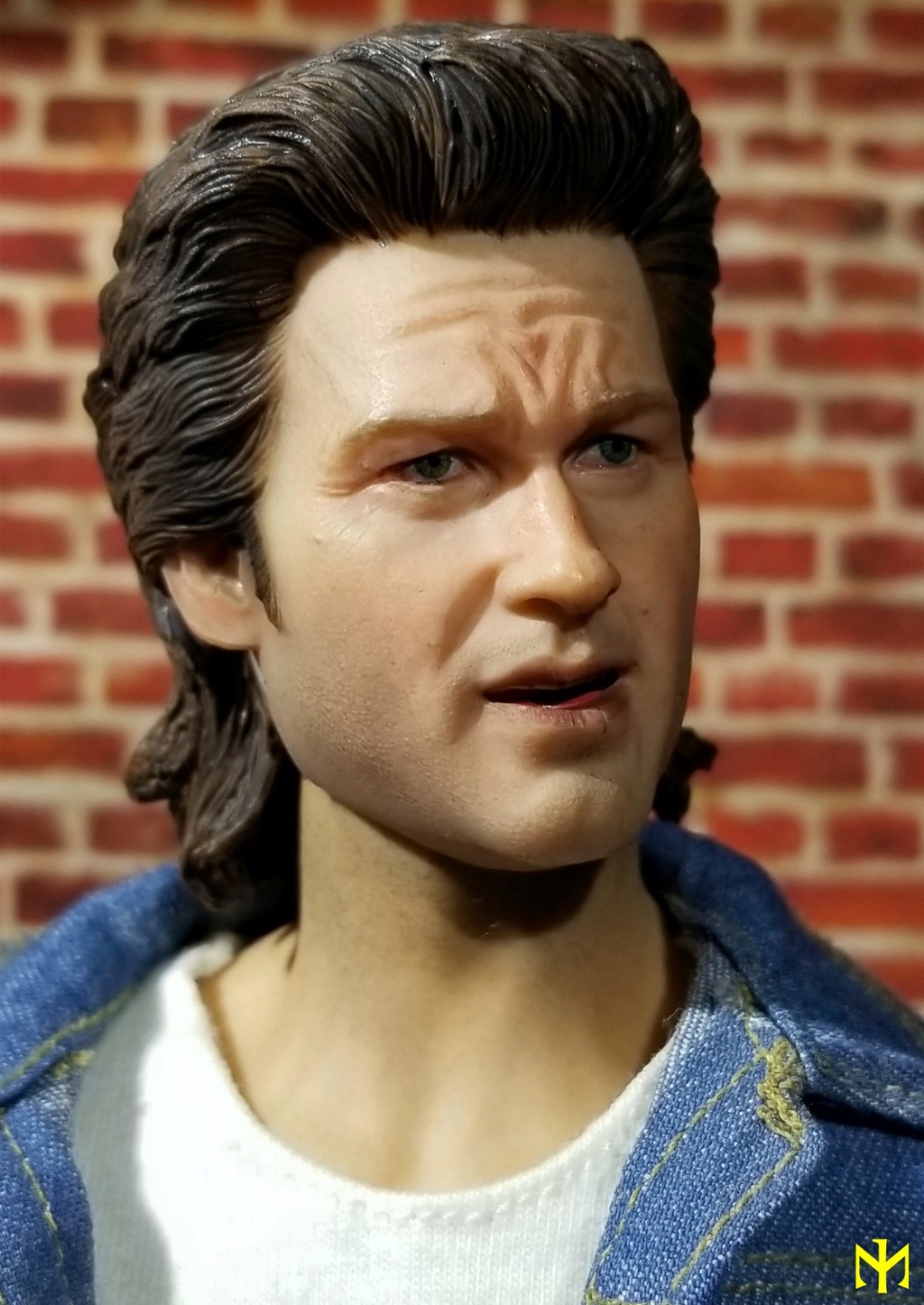 As so often these days, companies seem to settle for decent rather than excellent articulation -- whether by the design of the jointed body or the clothing and equipment placed on it. This seems to be the case here. Like Sideshow's Snake Plisken, Jack Burton sports a jointed muscle body designed to show off the elbows. Perhaps for this reason, they went with single joints, which are less of an eyesore, but allow a bend of only about 90% at the elbow; the knees are slightly better. I can't tell whether it is the boots or the ankle design that restrict the ankle articulation in this case -- the boots are made of very soft plastic, although it might not be soft enough to allow the ankles to hold a bent position; but it could be the ankle design after all, as the ankle peg pops out when I try to bend it too far. As a result, Jack Burton can sit but not squat, and action poses are rather difficult. Otherwise the articulation is quite good.

The accessories that come with this figure include a knife, a gun with a removable magazine (featuring nicely sculpted and painted shells), the watch, extra pairs of hands, extra buttons, the guardian, and the stand. The watch is a tiny work of art, with a shiny transparent cover over its face. There are three pairs of hands in total: the relatively relaxed pair that come on the figure, the gun- and knife-grip pair (the right hand for the gun, the left for the knife), and a pair of fists. Each hand comes with its own wrist peg, which is a nice Sideshow tradition. The hands swap relatively easily and are nicely sculpted despite being made of fairly soft plastic. In case some of the buttons on the outfit disappear, Sideshow has provided three extra buttons (2 brass and 1 silver) in a little reclosable plastic bag. The guardian is technically a separate figure, or rather statue, nicely sculpted and painted (see above), but understandably unarticulated. The hexagonal black stand features the film title on its top, but being executed in black on a black background, it is difficult to read or even notice. A special bendable metal rod is provided to attach to the stand's stem (there are three little openings you can choose from, but you might need to open up the holes in the rubbery cover before you could insert the rod); attach the guardian on the outer end, and he can hover around and spook your figure. Is this a lot? Spare parts and stands are not exactly accessories, which leaves us with the knife, gun, watch, and guardian. And while the guardian is a cool extra, it is not exactly an interactive accessory. So that is not all that much for a $240 figure. Besides, there were other items (sunglasses, guns, bottles, etc) that could have been provided. 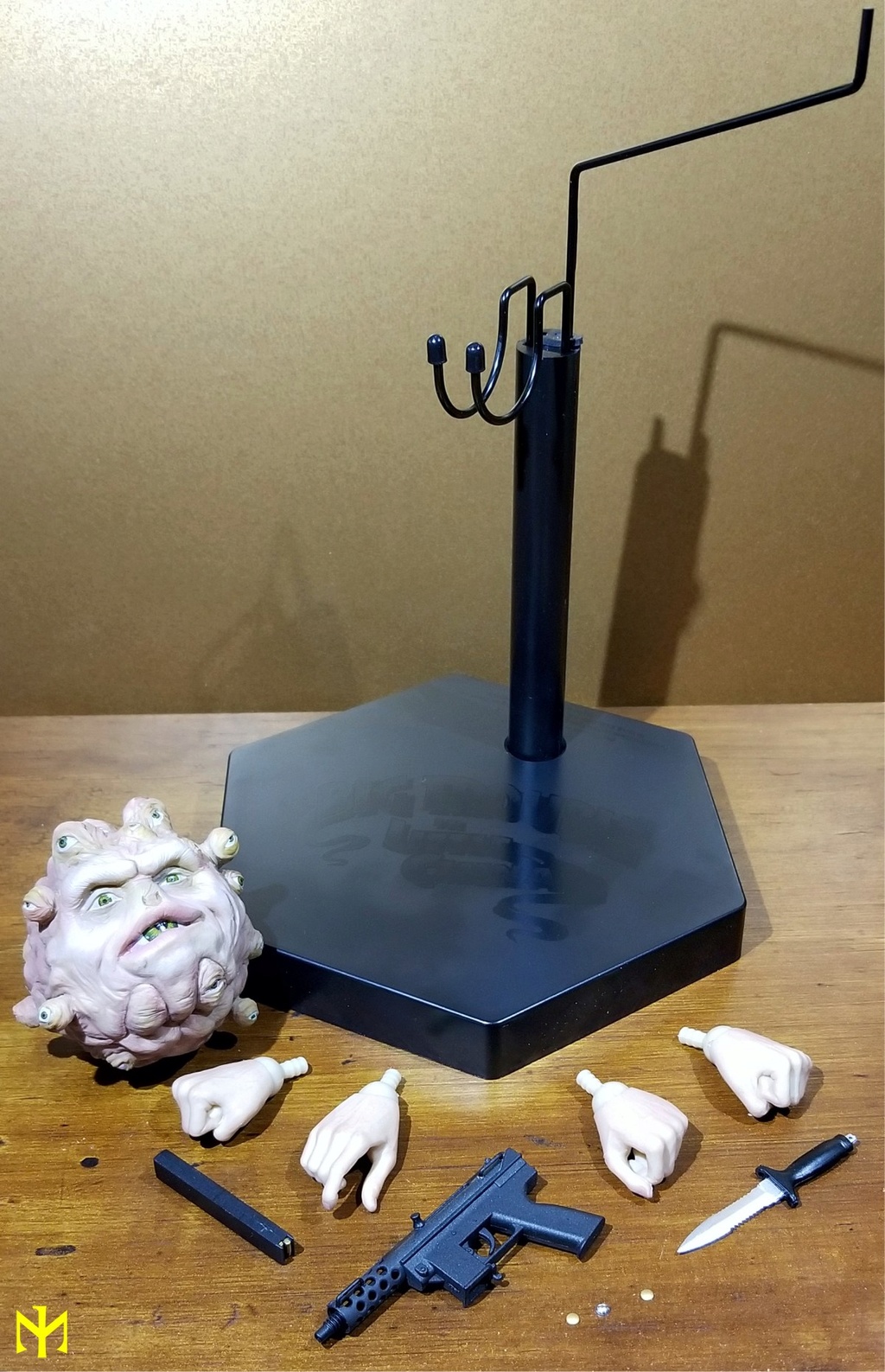 In this category, the product is pretty much impeccable, although once again one could question some of the choices. The denim jacket is beautifully executed and looks realistic and worn; the only drawback is that it was not featured much in the film. The jeans are not only nicely tailored, but give the appearance of a fashionable acid wash; they are perhaps a little too clean, and the white velcro closure for the fly is a little bit too obvious. Note that only the back pockets are functional. The little caps used as buttons on the jacket and pants are the right colors and size. The signature white tank top from the movie is reproduced in beautiful detail, the printed design matching what we saw onscreen perfectly, as far as I can tell. I have discussed the leather-like plastic boots above, but the only problem with them applies to the articulation category. 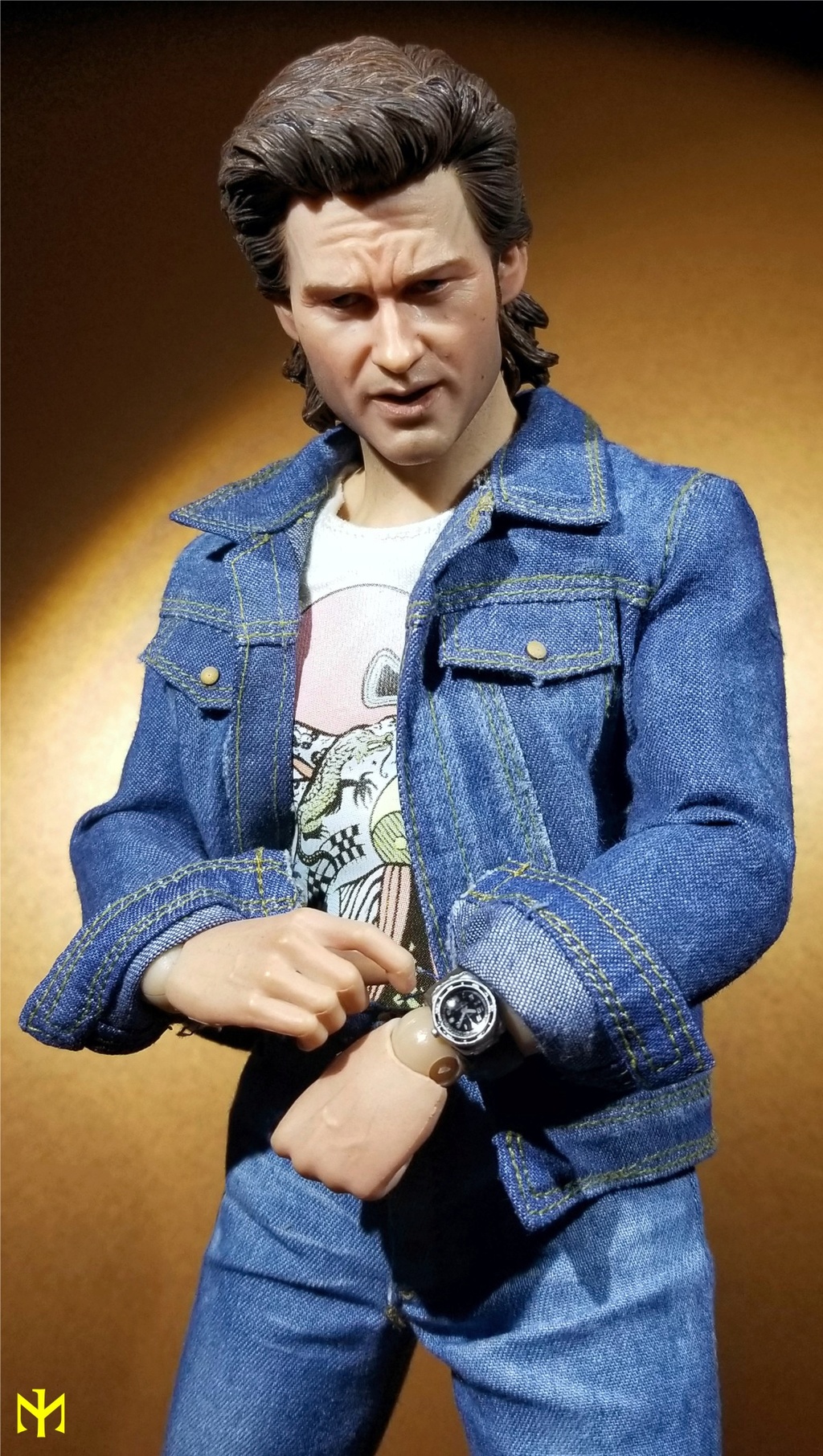 This is somewhat more difficult to determine than usual. The limitations in articulation and the absence of other figures from the film are likely to get in the way of a perfect score in this category. Admittedly, Jack Burton comes with the guardian which can be placed to hover by him if you are using the stand, but there wasn't that much interaction between the two in the film. Nevertheless, you should be able to find a few good poses for the figure and display it on its own or alongside other similar collectibles. 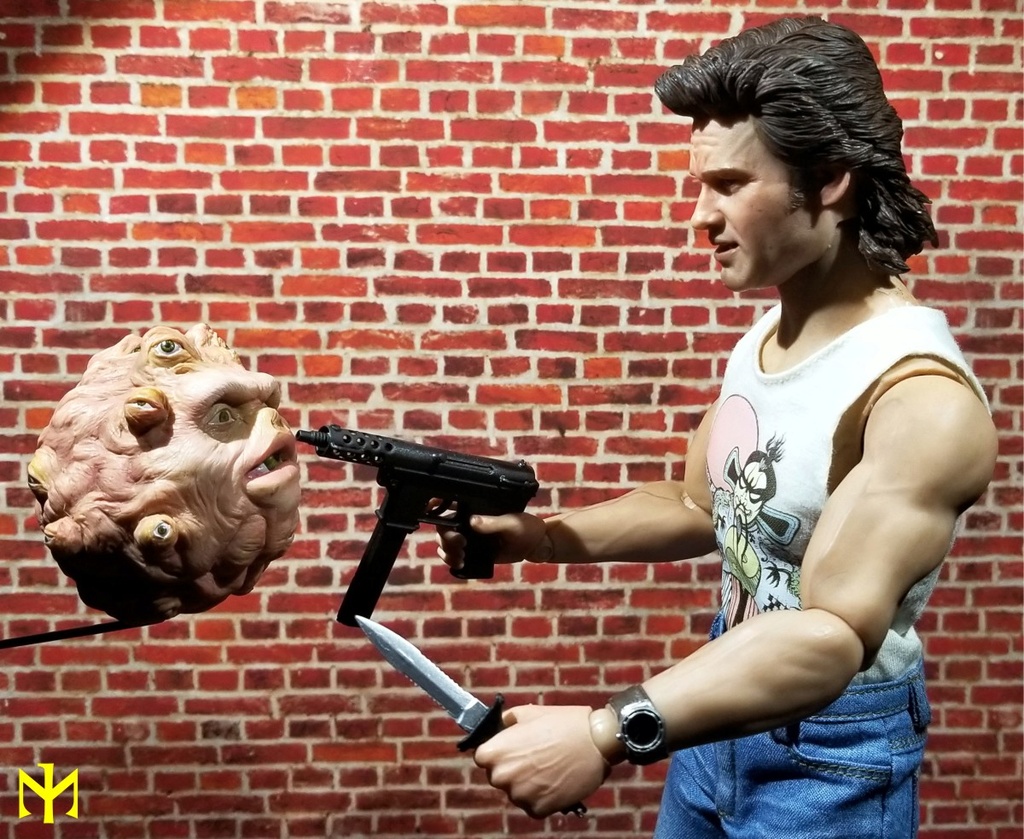 At $240, this is an expensive collectible even these days. Given the good but not outstanding paint quality, the articulation limitations, and the small number of accessories proper, this is not much of a deal. On the other hand, there is the guardian, technically an extra figure. I like its inclusion, though I could have easily lived without it and with a lower price. If it wasn't for it's inclusion, I would have dropped the rating in this category a little lower. 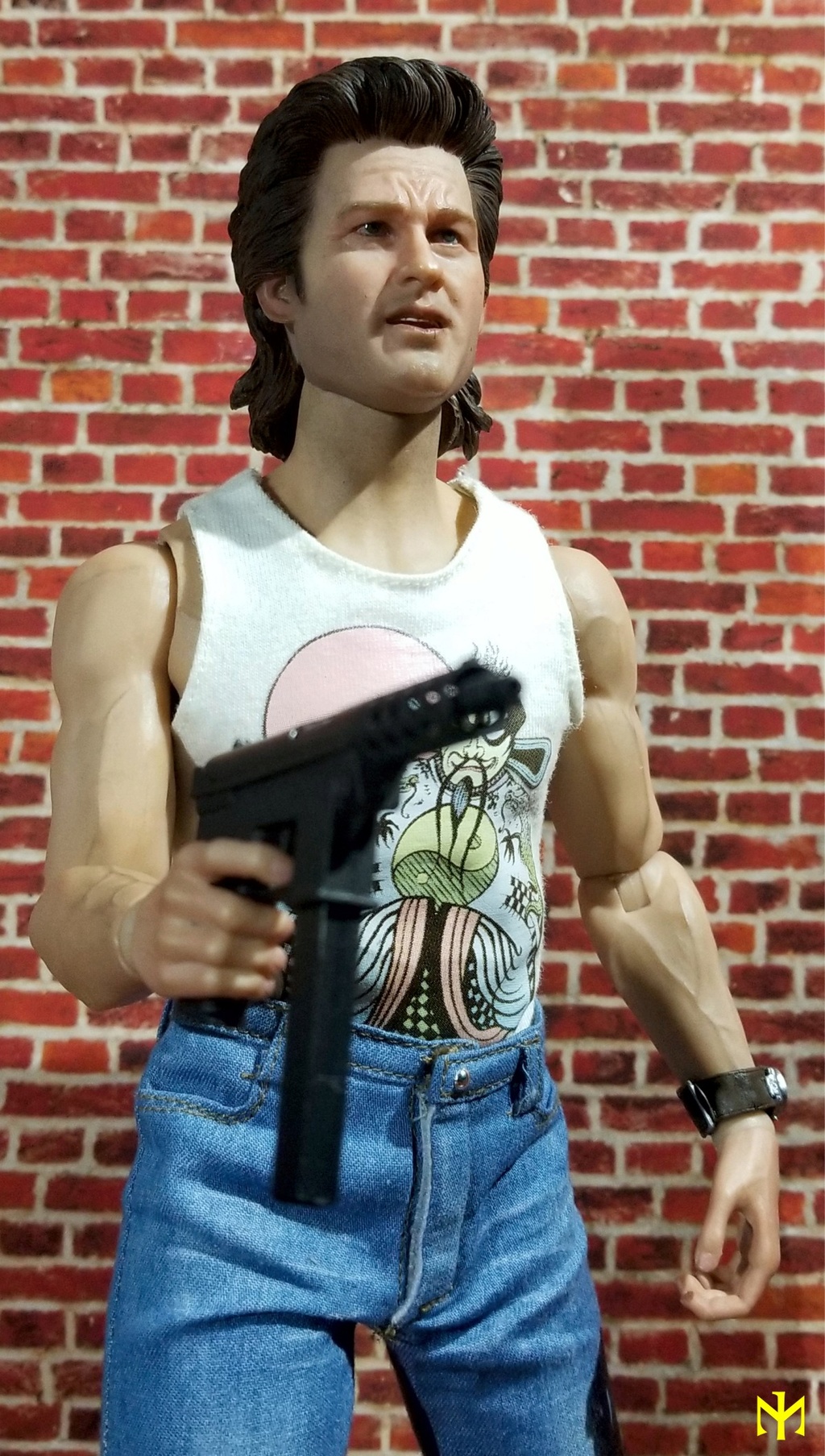 Things to Watch Out for

No much. Take the usual precautions swapping hands, although it is not much of a challenge, and be careful attaching the magazine to the gun. As mentioned above, it may be difficult to insert the additional support rod for the guardian to the stem of the base, so take your time and open up the holes in the rubbery cover in that area. From previous experience (which could have been an exception), be careful with the paint, especially on the face. I noticed a little bit of flaking on the elbow joints, although there was no change in actual color. 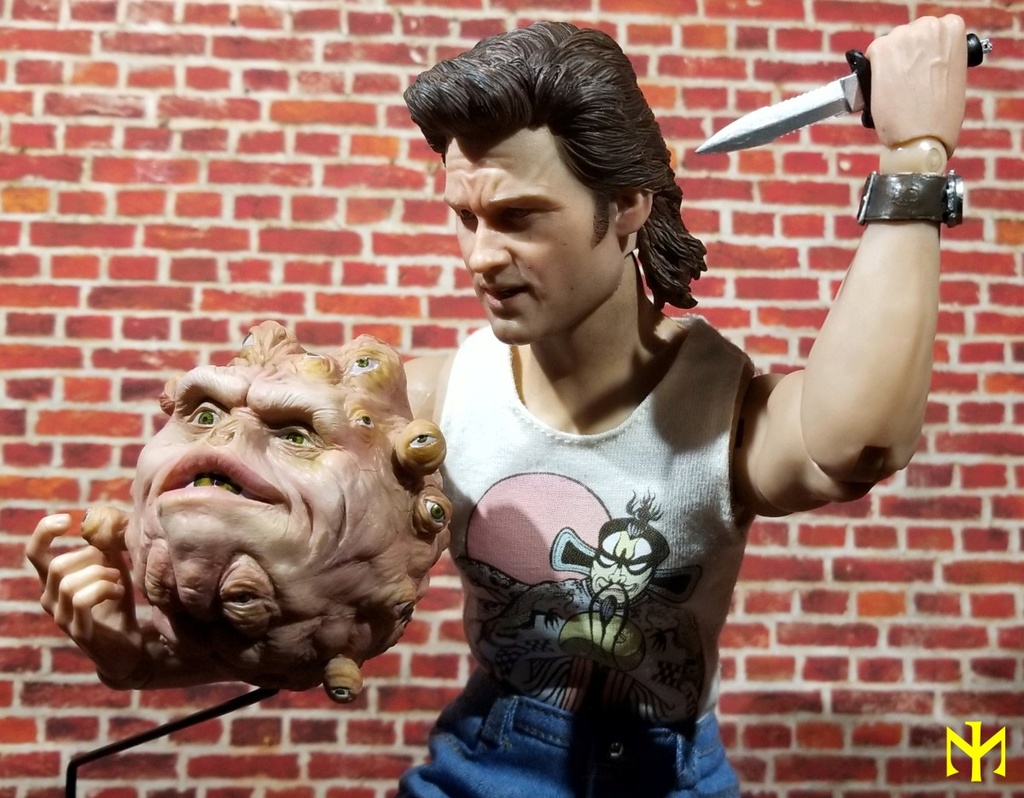 Given the negative reception of this figure by so many, I was surprised to arrive at so positive a rating (and it is not an exact science). But while I might not have made the same choices in every instance (e.g., the facial expression), on the whole the product is faithful to the prototype (which was photographed at some distance and in a very specific light environment), very well sculpted, quite decently painted, excellently outfitted, and decently articulated. It is not perfect as a whole, or as a likeness of Kurt Russell in particular, but it is also not really bad. This might not be quite cool enough to do justice to a very cool character, whether it meets your expectations or needs would be up to you; I do not regret getting the figure (except maybe its price). I hope this review and its photos have helped inform you about it.

This product is a Sideshow exclusive, and retails at $240.

So far, there are a couple of ridiculously overpriced listings on eBay, which I did not see fitting to include. 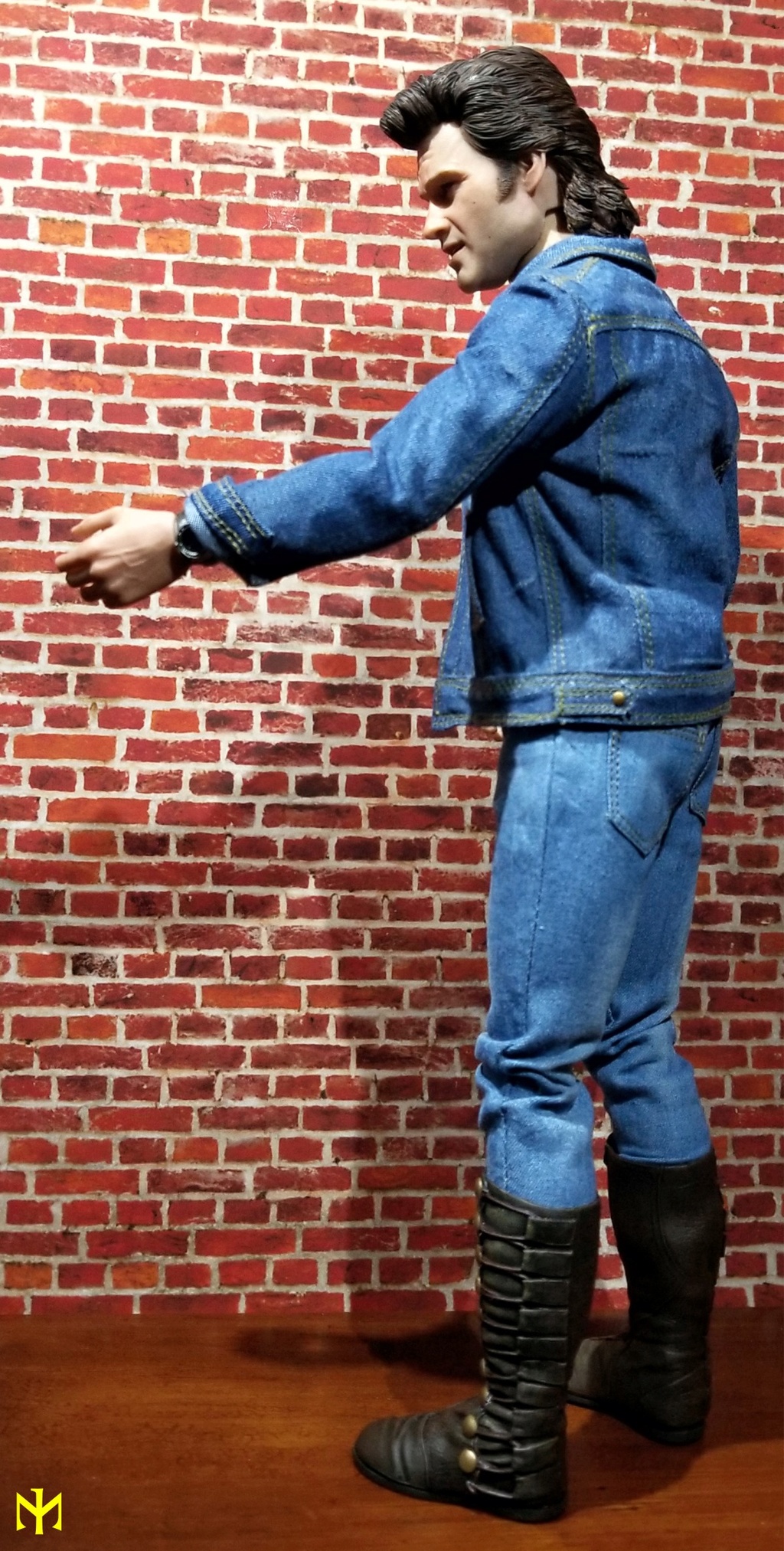 I hope you enjoyed this review, and am happy to answer any questions. Meanwhile, three more for the road... 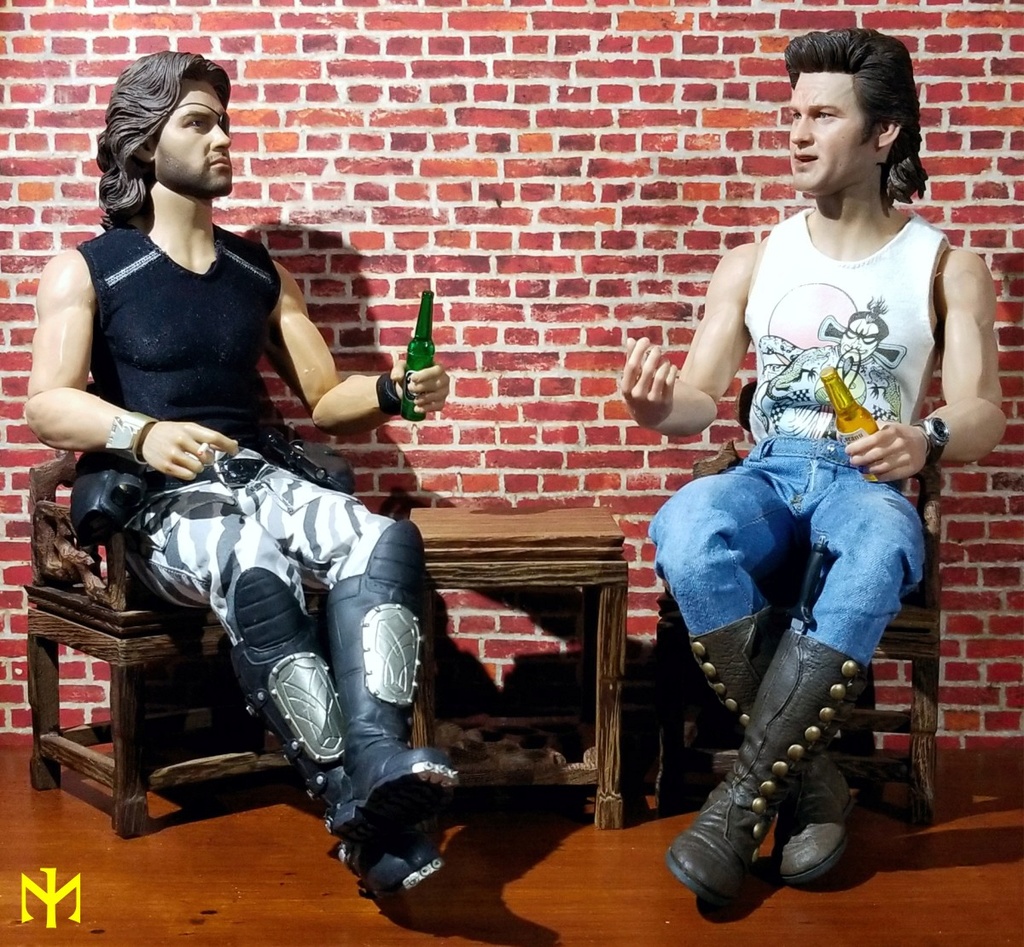 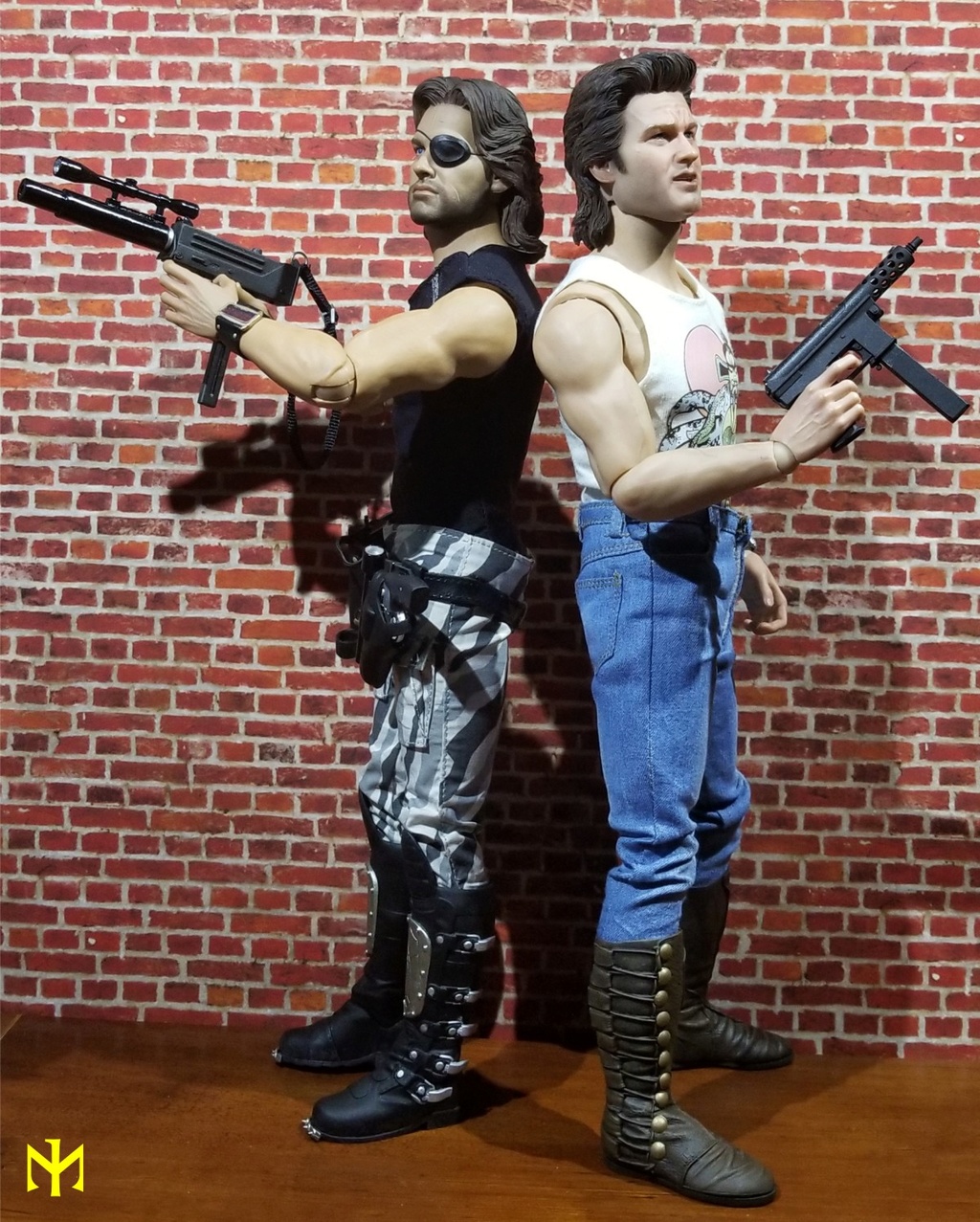