Founding Father
Posts : 7671
Join date : 2018-03-29
Location : Somewhere between myth and reality.
Since a new forum needs new contents, here is a quick little review of a figure I obtained recently. It is DML's MIB3 (Men in Black 3 -- both appear as labels on the box) Agent K from 1969. In the film, Josh Brolin played the role of a much younger Tommy Lee Jones. If we can rely on the time stamp found on the sole of one shoe, the figure dates to 2012. 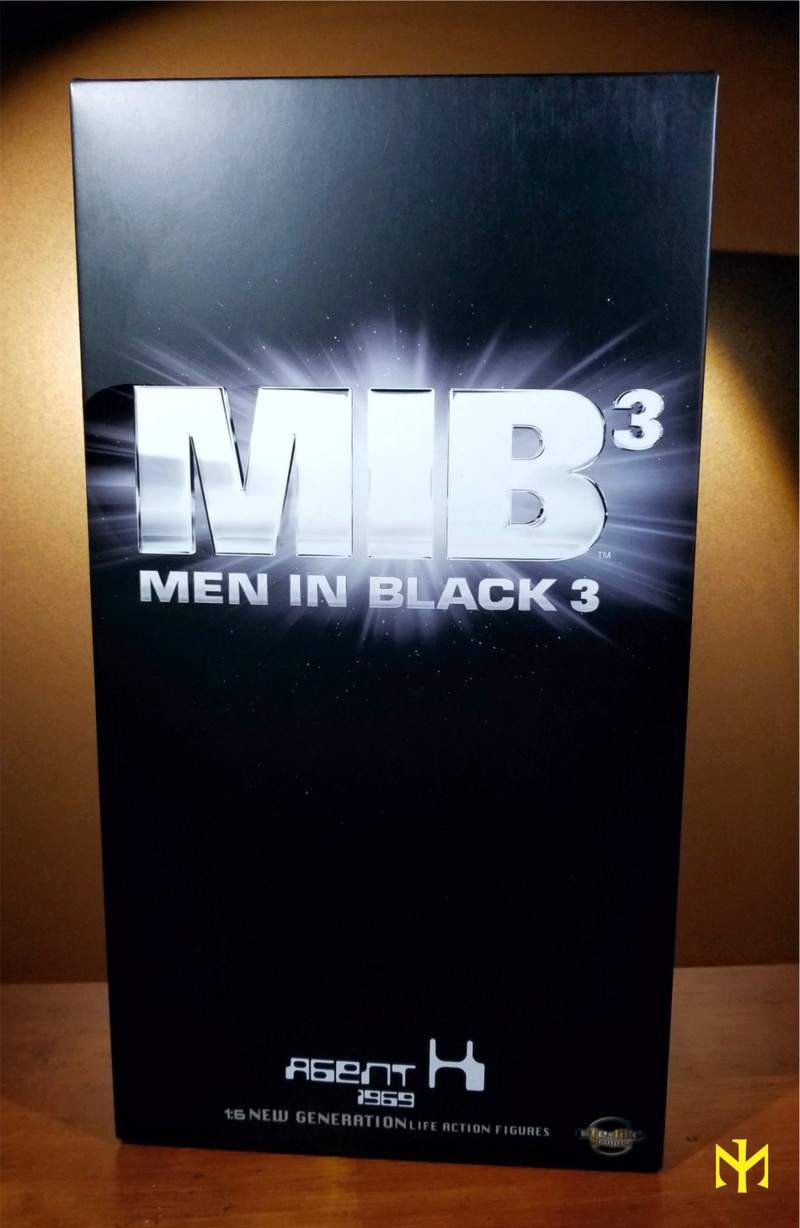 The figure comes with a one-piece head and neck sculpt of Josh Brolin. It is executed pretty well, but in what seems to be a more impressionistic fashion than what we are used to from other companies. This is a difference in style, but it might also be somewhat tailored for the rugged features of Josh Brolin. The sculpt and paint give the impression of a sweaty pale individual with hair that is beginning to go grey. The work definitely lacks the sharpness of HT and DAM products in either sculpt of paint, but still succeeds in conveying the overall impression. That said, the paint could have been done more carefully, especially on the sides of the forehead. Without being perfect, the head does resemble the actor well. The paint and gloss on the eyes is very well done, though difficult to notice because they are sculpted in a fairly squinted position; the paint is also very good on the three guns. The hands have very nicely sculpted lines and veins, and possibly some subtle paint work too. 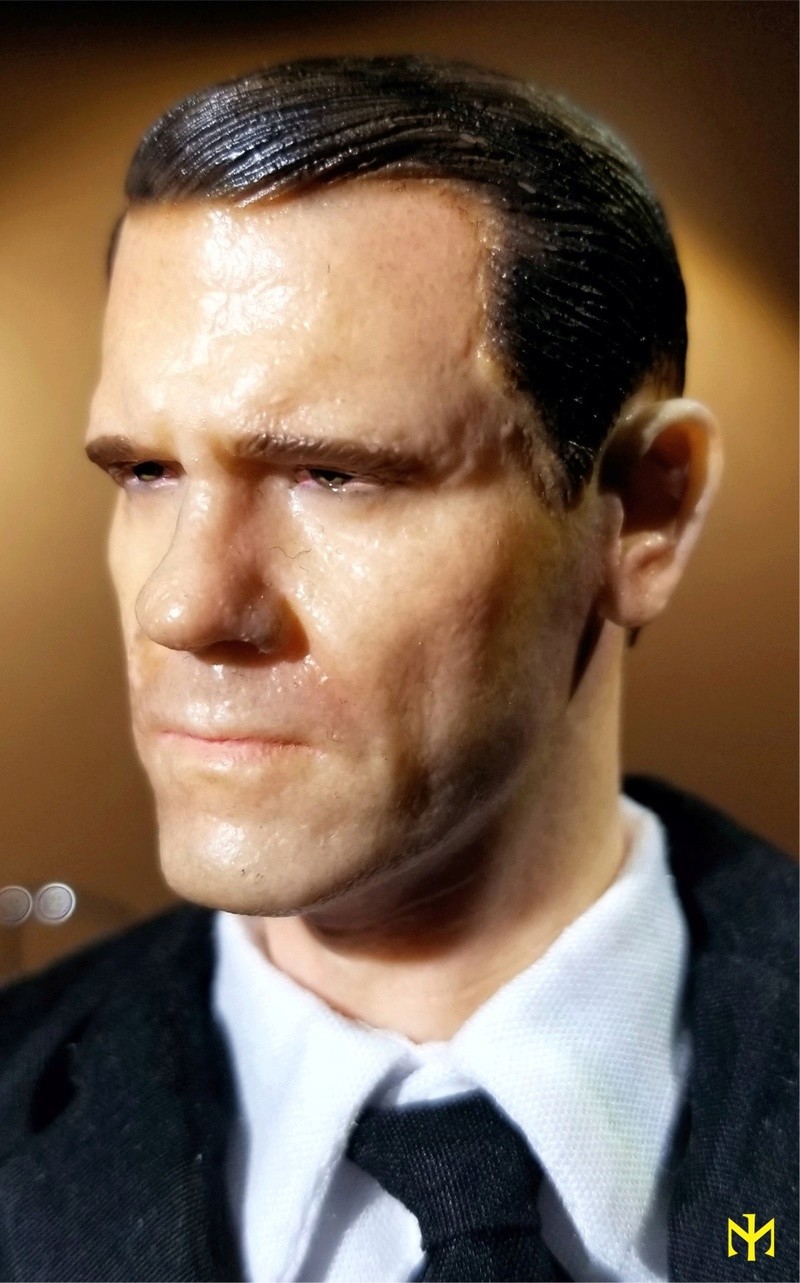 The figure comes wearing a two-piece black suit (hence "Men in Black"), black tie, black silver-buckled belt, black socks, and glossy black shoes, as well as a white dress shirt. The socks are a nice touch, as they are often omitted in other products, making formally-dressed figures look silly when their emaciated plastic ankles are exposed. The two-piece black suit is made of a soft, slightly velvety material, which looks great, although it can attract dust. The three front buttons on the suit jacket are functional; there are also three buttons on each jacket cuff.

Agent K comes with a two-part display stand, one extra pair of relaxed hands (the figure comes wearing gun-grip hands out of the box), translucent sunglasses, and three different alien-hunting guns. Each of the three guns has a black handle and various chrome and translucent sections. While they do not look particularly realistic, the guns appear to be movie-accurate.

The action figure body appears to be of an older type, with the hands permanently attached to their wrist pegs. The body has pretty good articulation, but is a little bit floppy and jerky: the ankles are a little weak, and the arms cannot keep raised positions easily or precisely as the jacket tugs on them. Otherwise the figure does not suffer from common articulation problems such as at the wrists or ankles, elbows or knees. The figure stands reasonably well without the included stand. 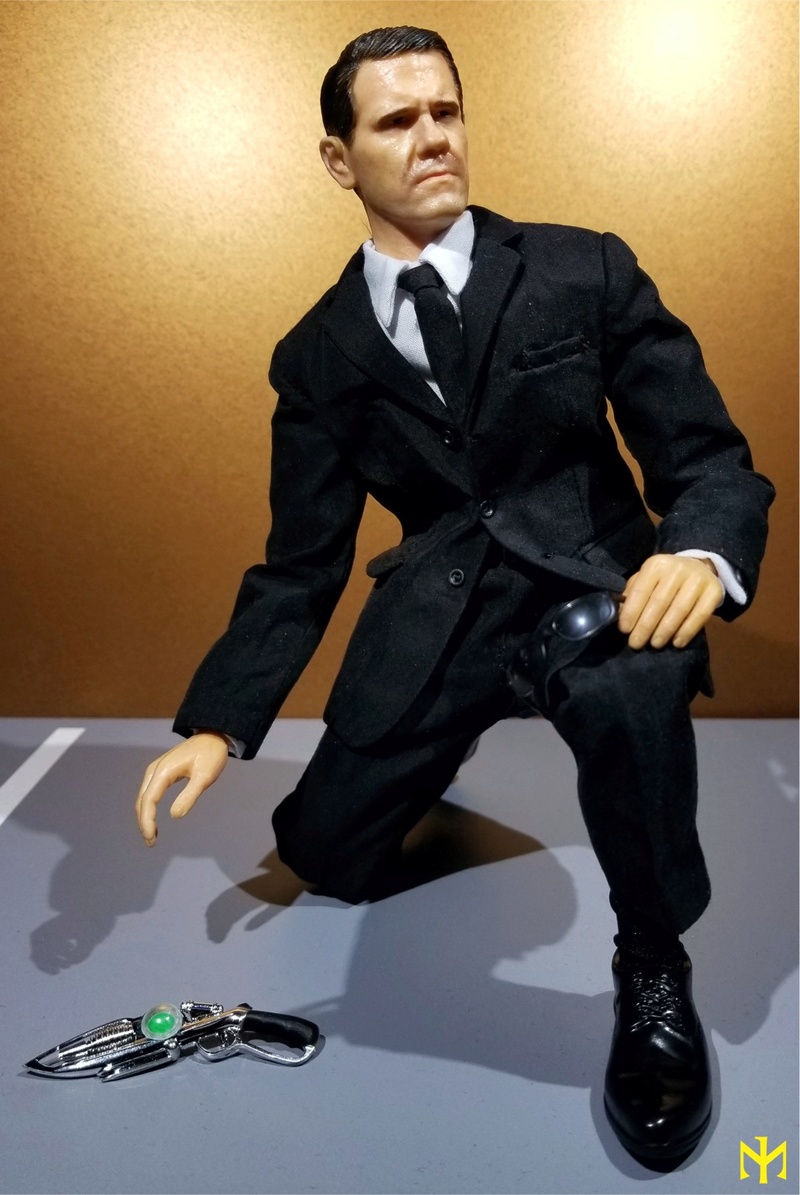 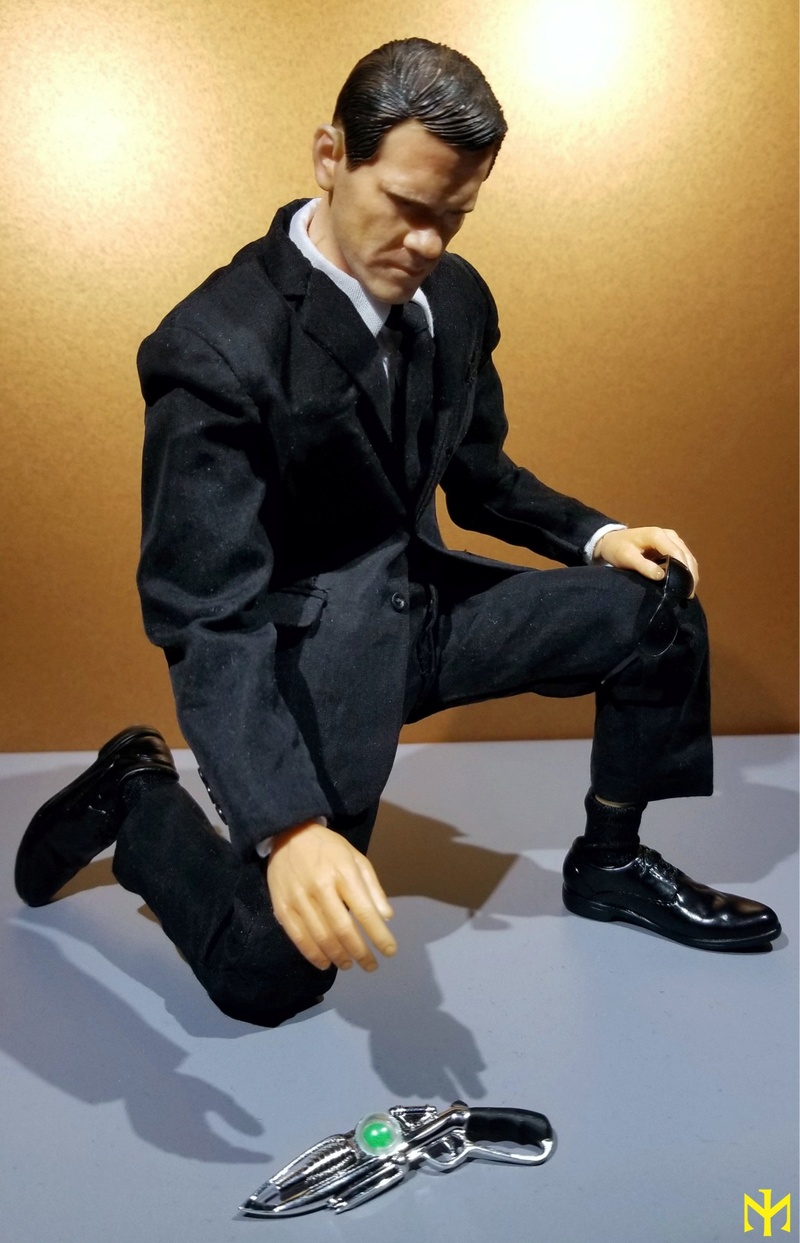 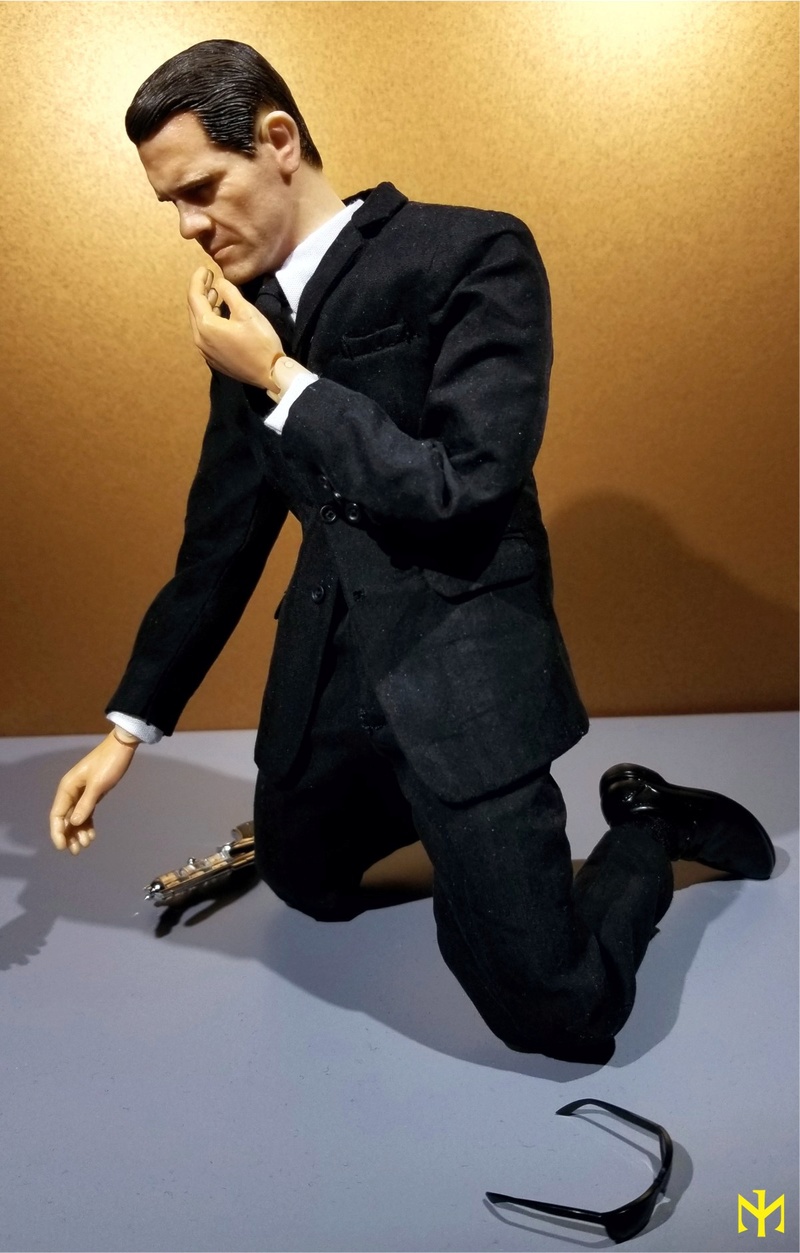 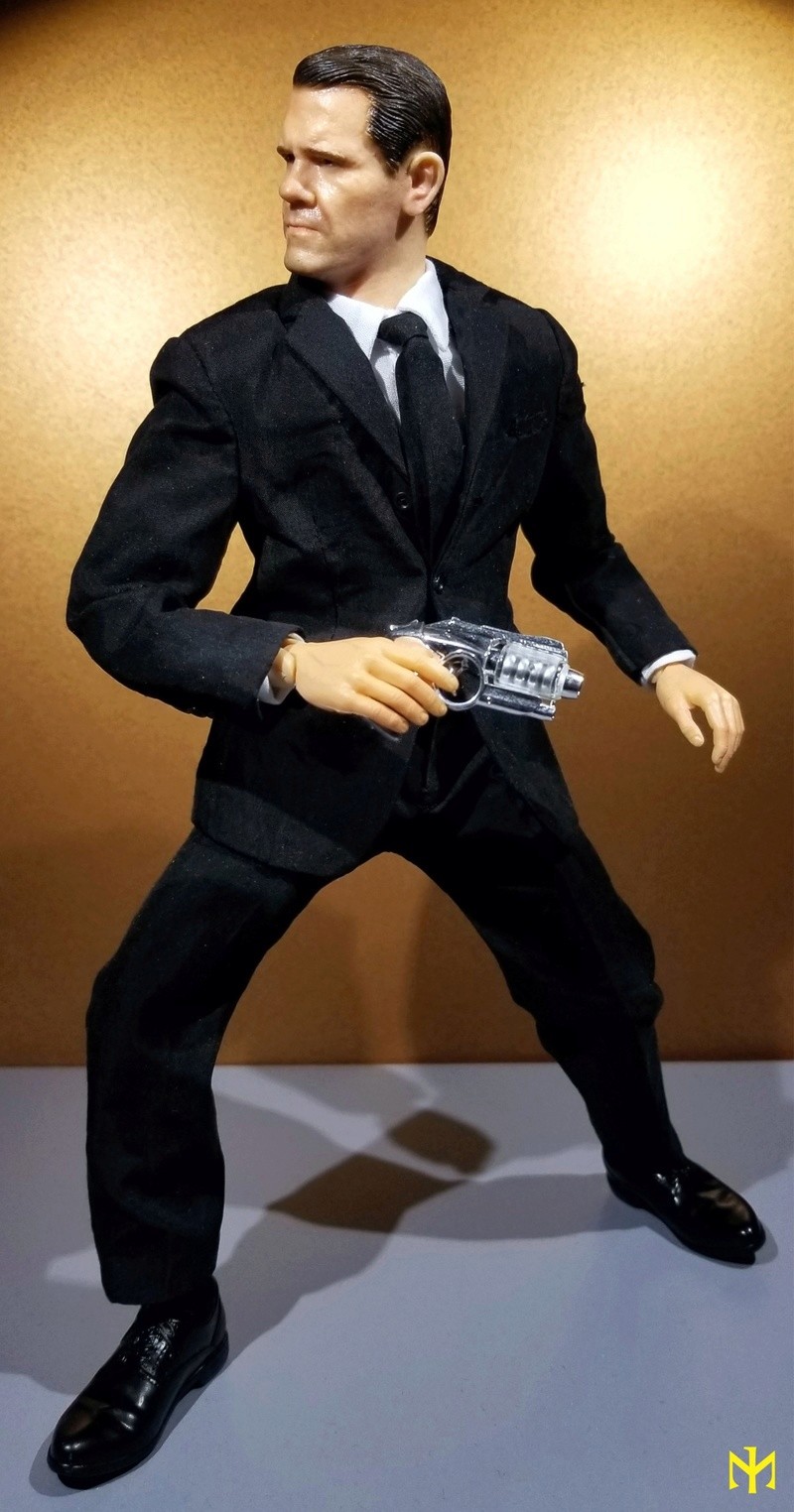 Overall, despite the somewhat impressionistic head sculpt and the dated body type, this seems to be a very decent product. I purchased it with the intention of customizing/kitbashing, but we'll see what happens to it in the end.

Founding Father
Posts : 1738
Join date : 2018-03-29
Location : East Anglia, UK
He actually looks a lot better than I thought he might. With the shades on he does actually look pretty cool. The old Neo3 shows its age a bit now though, on one of Kit's clone bodies this could look mega.

Posts : 339
Join date : 2018-03-29
Age : 54
Location : Upstate, NY
I have to say, that is some of the BEST molded hair I have ever seen!
I had to look twice to be sure, before I read your description.
Whatever they did, other companies could learn from them.
Great piece to own!

Founding Father
Posts : 7671
Join date : 2018-03-29
Location : Somewhere between myth and reality.
Thanks scalawag and Pontiacvan, glad you liked it. I agree. While I would have preferred something more HT quality for the head sculpt (wouldn't we all?), it works pretty well. And the overall impression the hair makes is indeed very good.

Founding Father
Posts : 7671
Join date : 2018-03-29
Location : Somewhere between myth and reality.
Hi PickleMunkey. Glad you liked it. I did pick up a very nice Tommy Lee Jones head sculpt, and I was thinking of putting it on this figure's body and outfit.