Posts : 371
Join date : 2019-01-04
So now I'm getting inspired and in trouble from reading this forum.  I was thinking "what is my favorite show, where I would love to have character figures?", and immediately thought of Firefly!

Next was to see if any action figures were ever made, and you can find small ones with molded clothes, and one of the Captain, Malcom Reynalds!  Looks really nice too!  I couldn't resist and pulled the trigger.  It's already been out a couple of years, so I'm wondering if anyone here has gotten this figure?  Do you like it?  Did QMx ever make more figures?  My favorites would be Jamie and Kaylee!  However, I get the feeling the figure didn't sell well enough, as there are no other figures.

Anyway, hope some of you can share your Malcoms!

Founding Father
Posts : 7055
Join date : 2018-03-29
Location : Island of Misfit Toys
I have Mal, and was excited to get the rest of the crew, but the line is dead. Sadly, Mal was the first attempt by QMX to venture into the 1/6 market of action figures, and being new they really didn’t know what they were doing (they’ve improved immensely with their Star Trek figures). Their first production pics of Mal were met with derision and disgust (most of it surrounding the over-sized and poorly painted head sculpt). This put a lot of people off on ordering the figure, or outright not buying him. Before the majority of us received him, QMX (to their credit), went to (I believe) a different factory and had the heads redone, and improved, and included both head sculpts in the box to customers (at no additional cost to the consumer). Even though the product had been fixed, at their expense, it still took a LONG time for Mal to sell out (if it even has), and I think it made them skeptical about the success of the line. By that time QMX had started their original series Star Trek, Princess Bride, shown prototypes for other potential projects, and even showed prototypes of Jayne and Zoe from Firefly. Star Trek took off, we have Westley from Princess Bride, but QMX has said that it would take a media blitz of some sort (a new movie or something), for them to revisit the Firefly line, as it’s been out of the public awareness for too long. So, as I said, the line dies with Mal. To say that I was pissed is an understatement, as I love Firefly, and usually rewatch it once a year. I was really looking forward to having the entire crew on display.
I’m still holding out hope for the original crew of Star Trek, but one can never hold out too much hope in this Hobby. So far we have Kirk, Spock, McCoy and Khan. Scotty is in production, we’ve only seen a Sulu prototype, and no sign yet of Uhura and Chekhov — it’ll be a shame if we never get the last three.
_________________
Mark

Posts : 371
Join date : 2019-01-04
Yes, I figured it was too much to hope for since the sculpt was 2015-16 (at least in advertisements to reviews) I did find one for sale, a store on google's thing, paid via google check out, and never did that before, so I have no idea how it works. I'm guessing it is their attempt at an Amazon type of system? They gave 20% or $20 off coupon for first time, plus the seller has free shipping. So in the end the figure only cost me something under $120 I was pleased.

I was especially pleased to have discovered him as I'm also a huge firefly fan. I'm thinking of (new terminology for me, LOL) kitbashing the rest of the crew. If so, Kaylee is next

Founding Father
Posts : 7055
Join date : 2018-03-29
Location : Island of Misfit Toys
There was a sculptor (a customizer), who’s done work for several companies, who made sculpts of the entire crew. They’re not bad, maybe a little dated by today’s standards, but still pretty good. His name is Trevor Grove. Google him and you might find them.
_________________
Mark

Founding Father
Posts : 1735
Join date : 2018-03-29
Location : East Anglia, UK
Trevor does a lot of work for NECA these days, though they don't have the Firefly license. Funko do small figures, but, so far I've only seen Jayne and Kaylee in that line. I really want a River.

Posts : 371
Join date : 2019-01-04
Yah, I'm having a hard time choosing head sculpts for the crew. But a hard earned crew is better than instant satisfaction

Peaches wrote:Yah, I'm having a hard time choosing head sculpts for the crew.  But a hard earned crew is better than instant satisfaction

Posts : 3211
Join date : 2019-01-11
Location : the far, bright center
Wow, so glad I stumbled on this. I *heart* Firefly so much! I had seen the Malcolm Reynolds figure on ebay, but wasn't sure how it actually was in person. Peaches, when yours arrives, feel free to post pics!

And that's brilliant news that there's a 'Jayne' headsculpt floating out there, too. 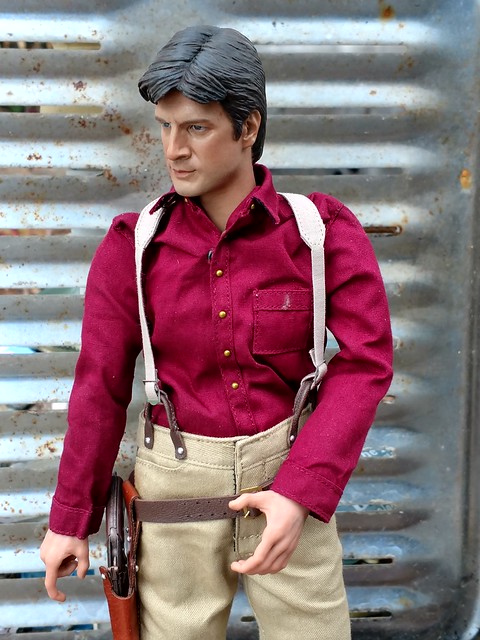 Since I'm new to Action figures, I am probably not the most discriminating connoisseur, however I think he's pretty good in the "bad" version and excellent in the "good" version.  Most of my pictures are with the updated head

The updated head and original "bad" head seem to be exactly the same except the seams on the original head are pretty pronounced and on the "good" head are cleaned up.  Also, the faceup is much better in the second head

They did not update the hands to match the 2nd head though, and the body of all things, matches the second head better. They did give the hands realistic veins which is super cool 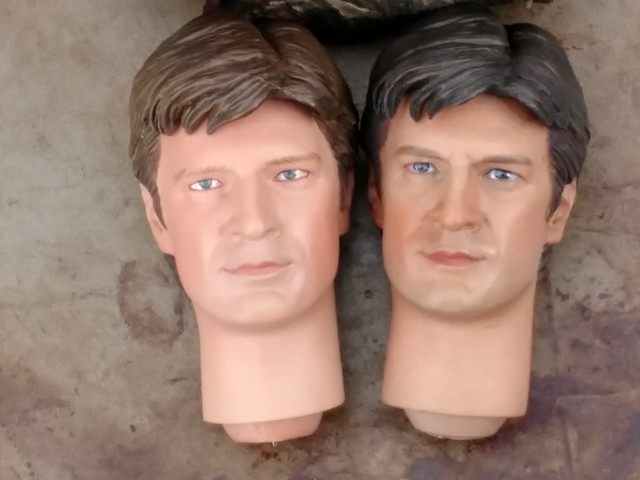 I mean, I think it's just the extra shading?  I could  be wrong though?!

I was kind of thinking I could use the old head to practice making things on, but then I'd be ruining the set perhaps?  I always seem to find an excuse not to do something, LOL

I just realized Nathan Fillion was Captain Hammer, LOL! He can do double duty, gotta put together a lousy super hero set for him

Founding Father
Posts : 6506
Join date : 2018-03-29
Location : Somewhere between myth and reality.
Don't you love it when something arrives early? Glad you liked it. And yes, the size, coloring, and detail of the second head are indeed both more accurate and more realistic. The company was awesome for adding the revised head at no extra charge when they shipped the boxes. Similarly, I recall them messing up the belt on one of their Star Trek figures (Shatner Kirk?) and providing the correct belt as an addition, once more in the box. There is a special place in Heaven for them.
_________________
I'll be back!

Founding Father
Posts : 7055
Join date : 2018-03-29
Location : Island of Misfit Toys
It’s not really “ruining the set”, unless you’re thinking of selling the whole thing down the line. I say, use the extra head to play with, like practicing removing the sculpted hair and adding real hair, for example. Or possibly making a whole new character. Or even giving it a repaint.
_________________
Mark

And ah, wow, I had no idea there was a second 'better' head. I mean, personally I am not someone who requires all  my figures to be 100% realistic -- generally what I aim for moreso is that my figures from the same 'verse or story go along with each other. So, if I have slightly more stylized figures, I don't mind, as long as the other characters (either official or custom) match them in style and aesthetic.  But that said, the second head does look really good, for the simple fact that the more detailed paint job gives him a bit more of his real 'character', which for me is the whole point of these figures...to capture something of the fictional character that I love and 'bring it to life' so to speak.

But if I'd just seen the old 'bad' head, I would not think it was completely terrible or not worth having, just a bit basic and older style of headsculpt, like older Sideshow style (though still with better paintjob than many of those, haha). I probably would have just thought 'oh i'll just repaint it or get it custom painted at some point', lol.

So, I take it that the 'better' head is available with all the boxed figures? I ask cause I was unsure about picking this one up, but may do so after all (if I can find it).

It's truly such a shame they never made the rest of the crew....poor Mal just seems so lonely flying around the Black without them. ;p
_________________
"The happy ending of the fairy tale, the myth, and the divine comedy of the soul, is to be read,
not as a contradiction, but as a transcendence of the universal tragedy of man."
Focusing on the Prequels, Clone Wars, and Original Trilogy eras (NO 'sequels', thanks!)

I just made Zoe on Blender/Make Human, and am going to see if my Nephew can 3d print it for me???  If that works, I might be in business

Yes, all of the boxes out there should have the new/better heads in them.  There is a special edition with an additional gun, but I didn't get that one.  From reviews, I believe that's all you get, the extra gun

Thanks Striker, that's what I planned on. Only thing is I'm so busy, so it could be years before I get around to it, LOL. I also have dioramas I've started and need to finish, ugh!

and oooh, good luck with the 3d printing...hope that works out!!

Though he told me he'd print for me "any time" I think I'll send him my model and see what he says, LOL