My Collection, and intro to main characters (image heavy) 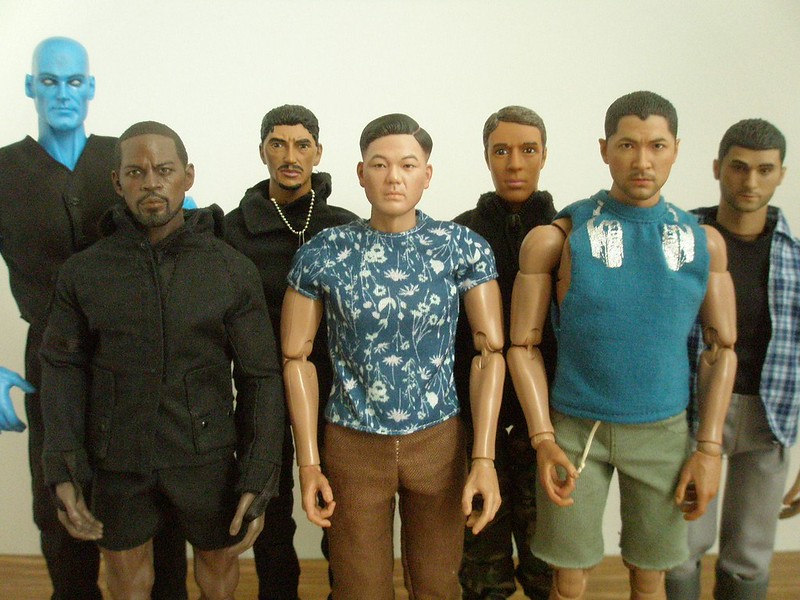 My Integrity Toys collection. I swear, every time I look again, Tenzin has added to his harem. 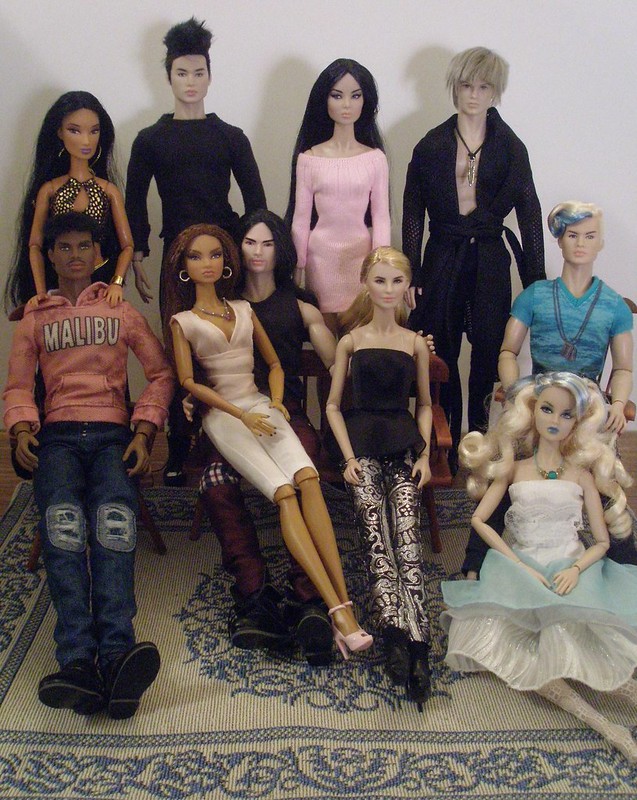 An orc in armour like they wear in Rappelz. Sometime I will make a larger orc from a Hulk. 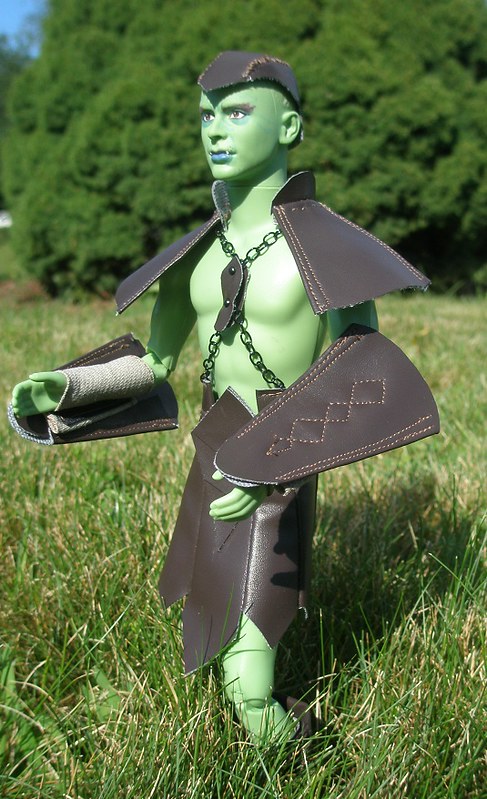 Most of my articulated figures have roles in a yet-to-be-written Rappelz fanfic. #fantasy #game
The main characters, the Imbrien sisters, were my player characters.
Kira, a Holy Warrior; Sela, a Dark Magician; and Tessa, a Cleric. 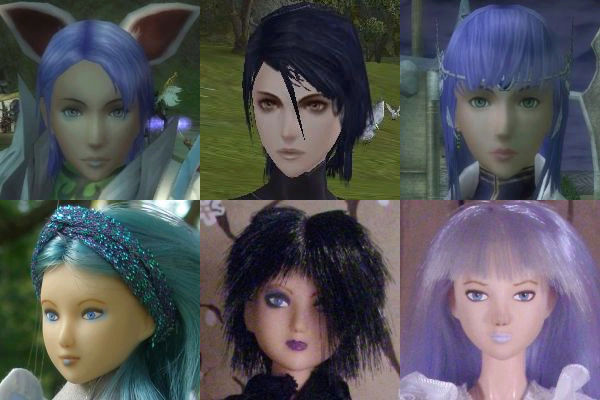 They're "Volbitsu": Obitsu heads on Volks bodies. Kira will get a new head with her right hair colour (it's partly rooted but I rarely work on it). And maybe a new body if Mattel ever makes a Curvy Made To Move in the pale skin tone that would match. I bought a Cy Girl clone for the purpose but the body was too tall and hands too big compared to the sisters.

Kira becomes a minor celebrity wherever she goes. She doesn't have her own band but is a featured vocalist on some other artists' songs. She's a lousy cook but good at baking. Kira befriends the most difficult people and may be somewhat of a magnet for sociopaths. She seems to get more than her fair share of boyfriends. Her childhood betrothal to Galhadrian Roquefort, a wealthy knight, was broken after she was kidnapped by orcs and considered defiled. Though she's no longer eligible to marry a nobleman, she hopes to find a good man who will value her for herself and willing to marry her despite her reputation. 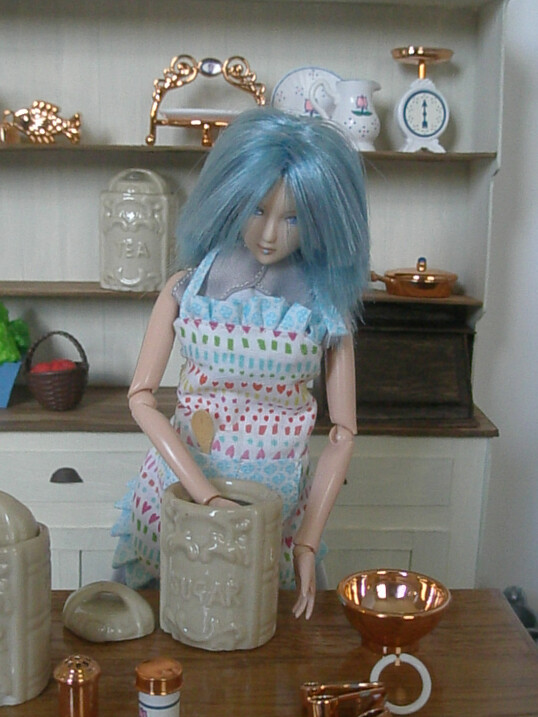 Sela hates being told she can't do something. She learned the destructive dark magic of the Asura race despite being a Deva, the race of light and creation. She ran away at fourteen to avoid being given to Kira's former betrothed. She's been imprisoned for several years for breaking into the realm of the demigods. But the demigods have decided to release some of the prisoners... 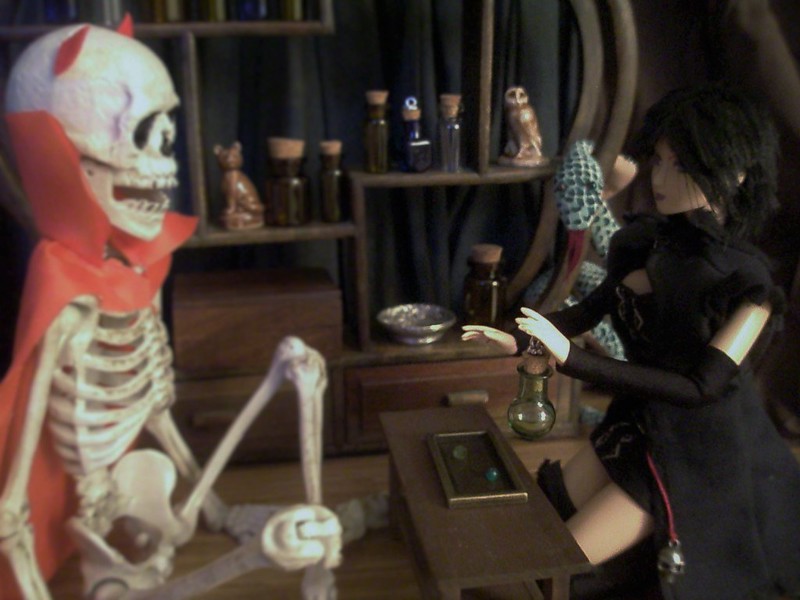 Tessa wants to help people in need, but is challenged by agoraphobia. She has weak joints prone to dislocation, and resultingly lives with chronic pain. She likes to draw and sew, but after exertion needs days to just rest. Tessa occasionally has Visions of the future. She was sent to a convent in Laksy to preserve her from the Church in her homeland, who would have had her put to death for heresy. The Church in Laksy sees her Visions as a gift to be used to benefit the Deva people. She secretly admires Galhadrian Roquefort, but is much too shy to talk to him. 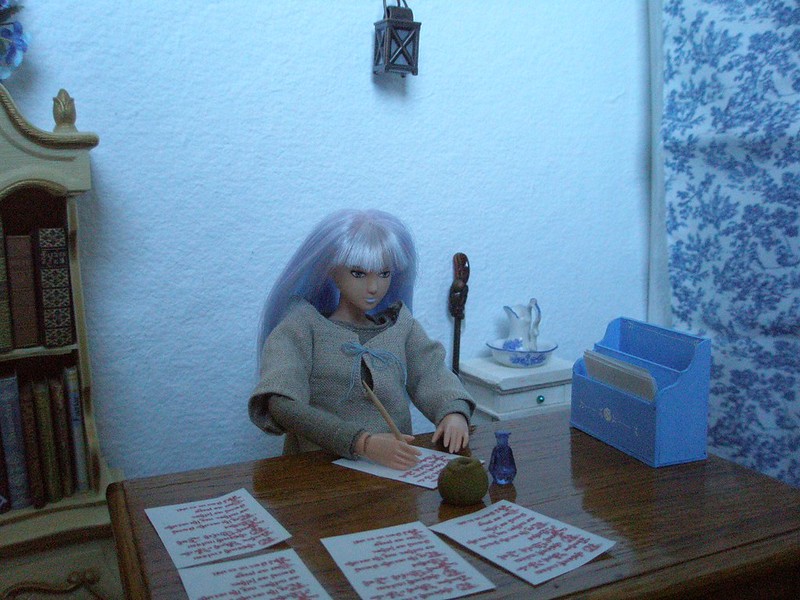 How Tessa earns some R (rupee) by Kukolka, on Flickr

This is the first I've posted some of these particulars of their story. 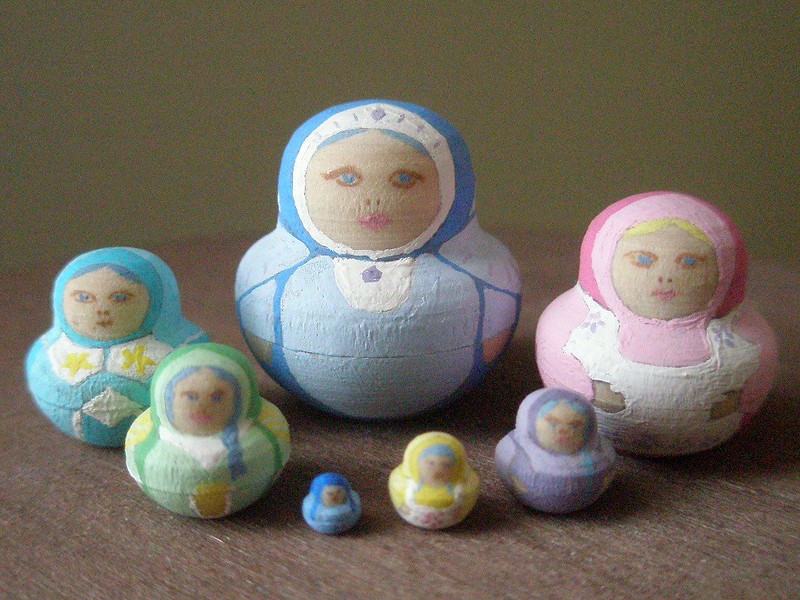 The largest one, to show scale. 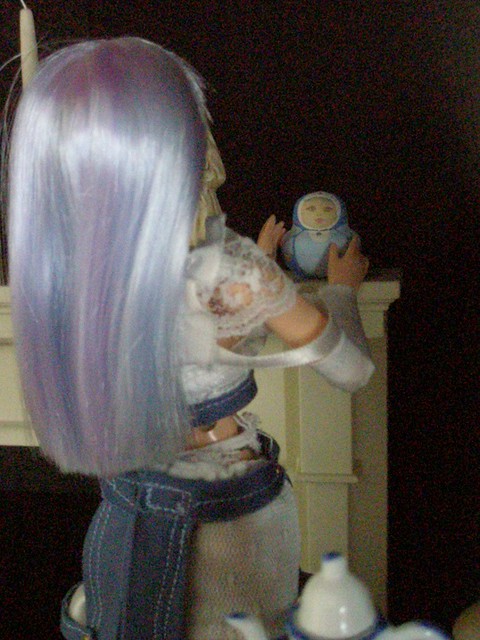 I was one of your figures if reincarnation is true. 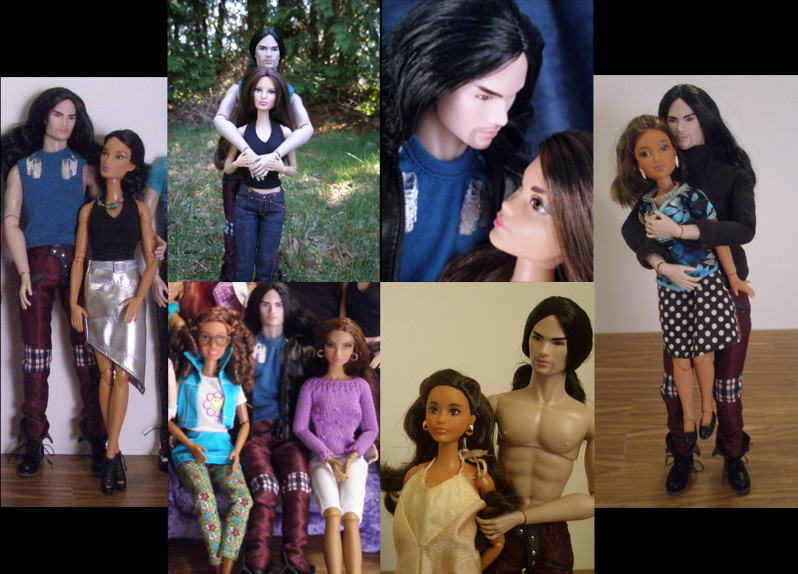 The kitchen dresser and bread bin are homemade of matboard. In the desk scene, the paper holder is matboard, the wash stand is balsa and matboard, and the books are balsa covered in cardboard covered in printables.

This skeleton is too tall for 1/6 so I usually place him seated. It's fine in game context, Evo 3 Skels are taller than humans.

The nesting dolls are made of wood, they came blank from DollladyUkraine on Etsy.

Very nice collection -- varied, yet somehow also consistent; fantasy and yet everyday. And it's nice that you have thought up these background stories for each. Seems to me that Galhadrian needs a break from all his bad luck. And a girlfriend/wife.
_________________
I'll be back!

Posts : 1247
Join date : 2018-03-30
Great collection.  Tenzin is really living the life! Surrounded by a harem of ladies, and he has good taste in pants and boots.  I dig the backstory for your Rappelz characters, and they're diorama pics are really cool.  I'm with Stryker that the the one with the Skeleton/devil is my favorite.  I actually think the fact that he's out of scale is an advantage, and not a problem.  If he's one of the demigods that had her imprisoned, it makes sense that he's kinda giant.  Some times those out of scale figures end up being perfect for fantasy settings.

So Kira's engagement to Galhadrian was broken off,  Sela took off to avoid marrying him,  but Tessa kinda crushes on him.  Is he a good dude or a bit sketchy?  I need to know if I should be rooting for or against him!

LOL @ DFC as Tenzin! Part of why he's been with so many women is he was supposed to be cast mini-DH, and I tried to see who looks good with him to be my mini-me. My husband had long hair like that when we met online, but never that long since I met him in person.

Still haven't decided on a mini-me, keeps switching between far right or bottom right in collage. Or if Tenzin will play mini-DH. Now Tenzin's harem has become a running joke.

Galhadrian is a good man, and a good leader. Lord and Lady Imbrien approve. Though that may not be such an important factor to our generation...

This story has been in my head since 2008: part memoir, part things that happened in game, part pure imagination. (You can rest assured I have never been kidnapped by orcs.) I doubted being able to tell it, since it's gone for so long untold. For a few months I'm on new meds. I didn't think I had any depression, only anxiety/PTSD. But now I could see maybe it was some mild depression, because I've been able to write again, and can see making the photostory a reality.

ReverendSpooky wrote:Some times those out of scale figures end up being perfect for fantasy settings.

*Nods* 42cm Hulk would be perfect for an Evo 3 Orc, except for such limited articulation: static elbows, and waist to ankles is all one piece. Too bad he can't sit nor crouch. (Please pardon the mess.) 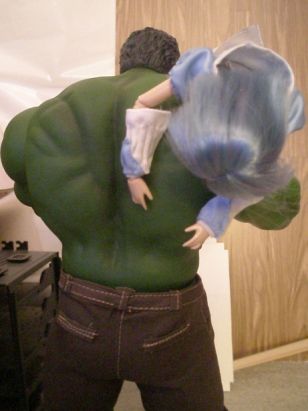 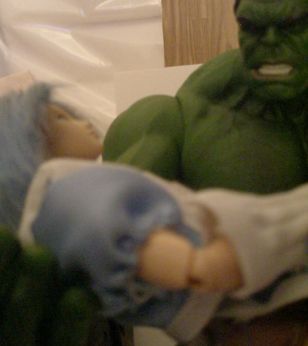 as for the hulk i remember someone modding a chinese bootleg version of the hot toys original, quite the effort but outstanding result.
in the end knees and elbows where articulated, well to the point the figure allowed.

took one myself to change into a fallout super mutant, though it came broken at delivery, most could be fixed easily, so by all means if you can get one cheap off ebay i´d give it a try.
best regards
tjolnir 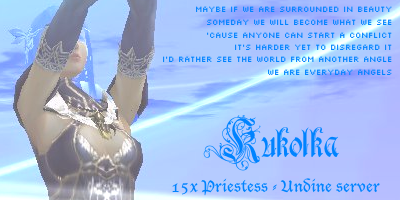 Posts : 79
Join date : 2018-04-06
Very nice collection Kukolka! I'm usually not in to "civilian" stuff but yours is very well done and I love the little accessories and environments! Very cute!

Also, I have to say it's really nice to see another woman posting and sharing her work on these boards. Not too many of us so--we've got to stick together!

Re: My Collection, and intro to main characters (image heavy)