Voldemort wasn't the only one determined to make Harry Potter's life miserable. At Hogwarts Harry's main rival was Draco Malfoy, an egotistical and arrogant member of Slytherin House, jealous of Harry's notoriety.
This 1 / 6th scale collectible figure of Draco as a teenager has 30 points of articulation and features an authentic portrait of Tom Felton as Draco from “Harry Potter and the Half-Blood Prince.” He has the Dark Mark tattoo on his left arm.

He comes equipped with his wand, including a magical flash effect as if he's just cast a dangerous spell. He also has a white ferret, his green apple, and his messenger owl.

The Deluxe version comes with two costume sets- his school uniform and his black suit. It also has extra accessories – The Monster Book of Monsters, his Prefect badge, and his Nimbus 2001 Broomstick.

The 1 / 6th scale Draco Malfoy Teenager (Deluxe version) collectible figure features:
-1 / 6th scale body, approximately 30 cm tall with 30 points of articulation with a tattoo on left arm.
-Fully realized authentic likeness of Tom Felton as Draco Malfoy in the movie "Harry Potter and the Half Blood Prince" with accurate facial expression and detailed skin texture.
-Each head sculpt is specially hand-painted.
PARTS
Interchangeable Six (6) hands including:
-(2) one pair of open hands
-(1) one right hand for holding his wand
-(1) one right hand for holding his broomstick
-(1) one left hand for holding the Monster book
-(1) one left fist hand 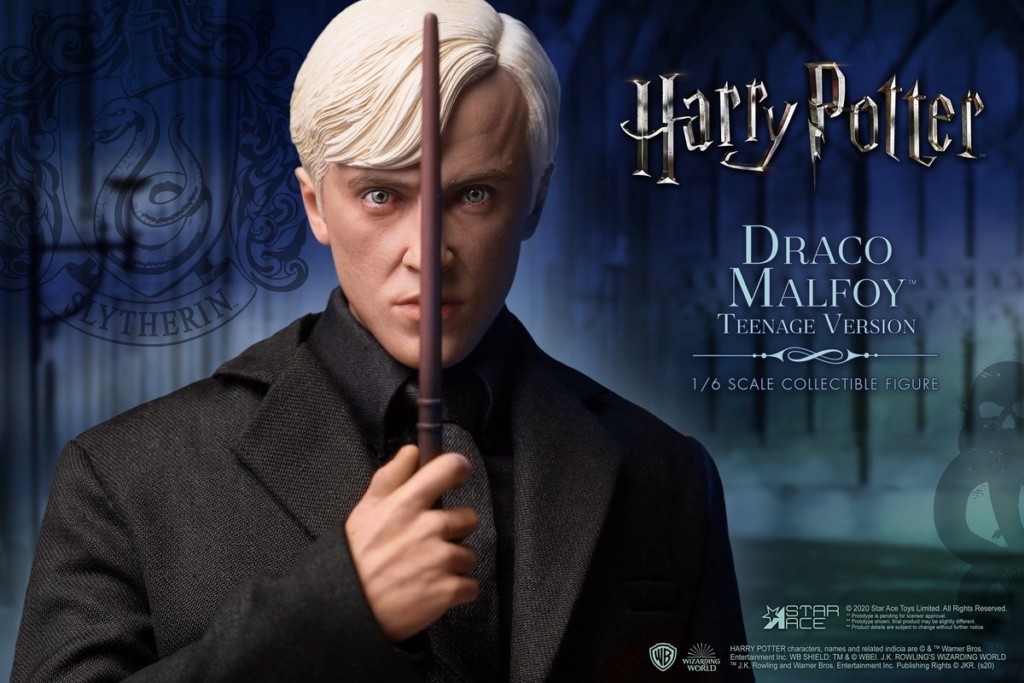 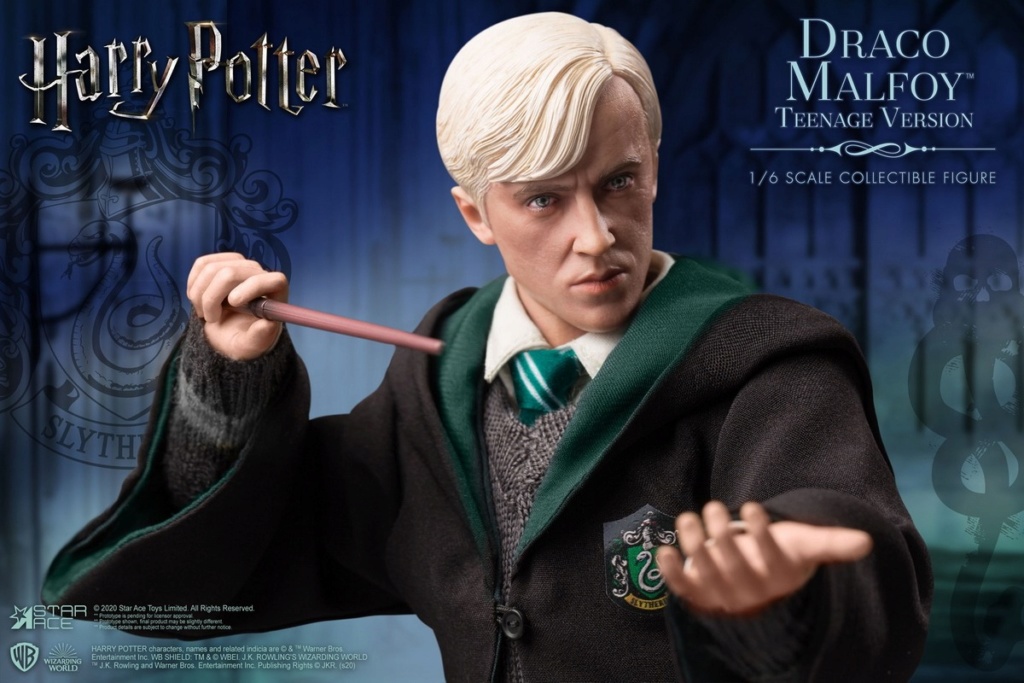 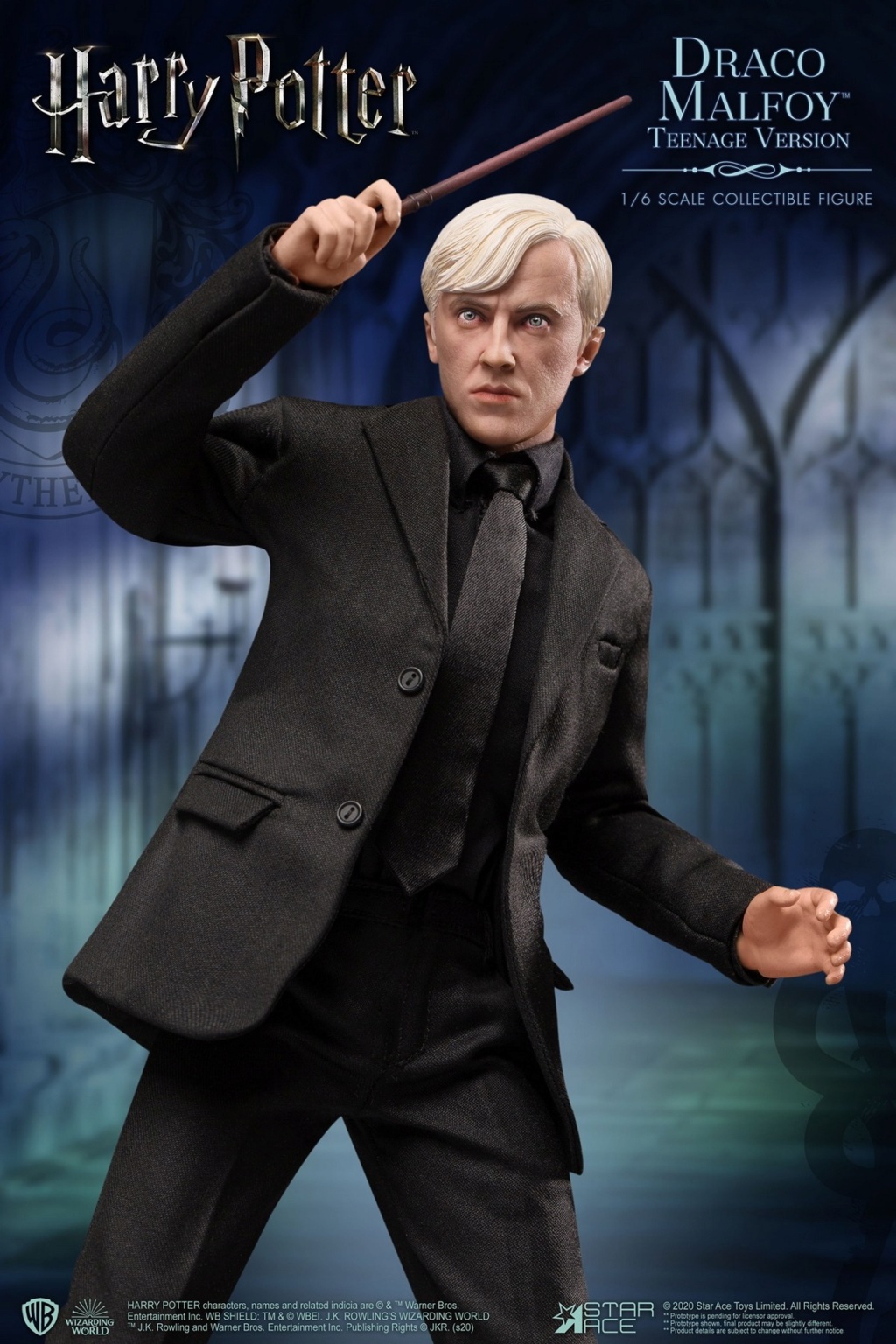 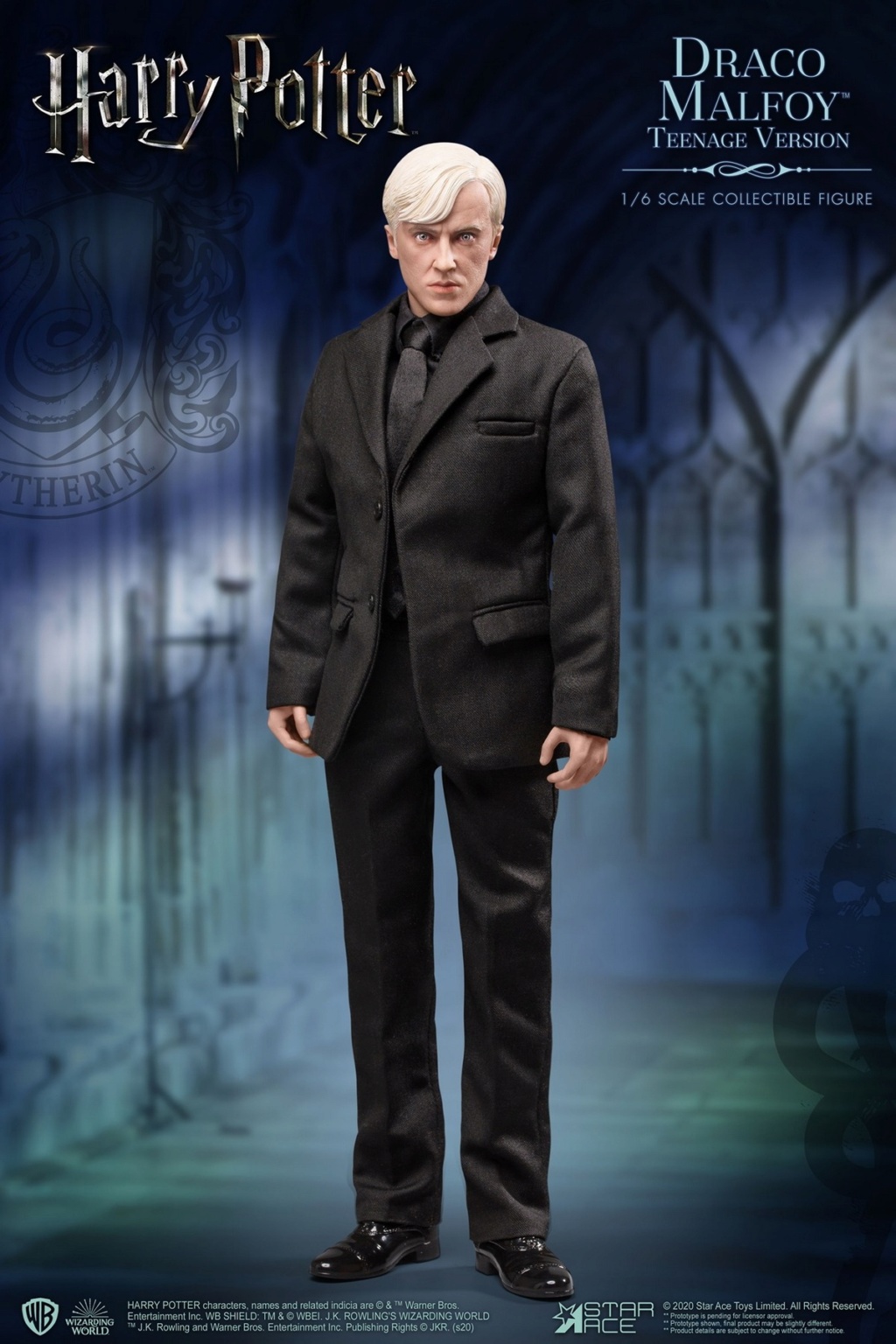 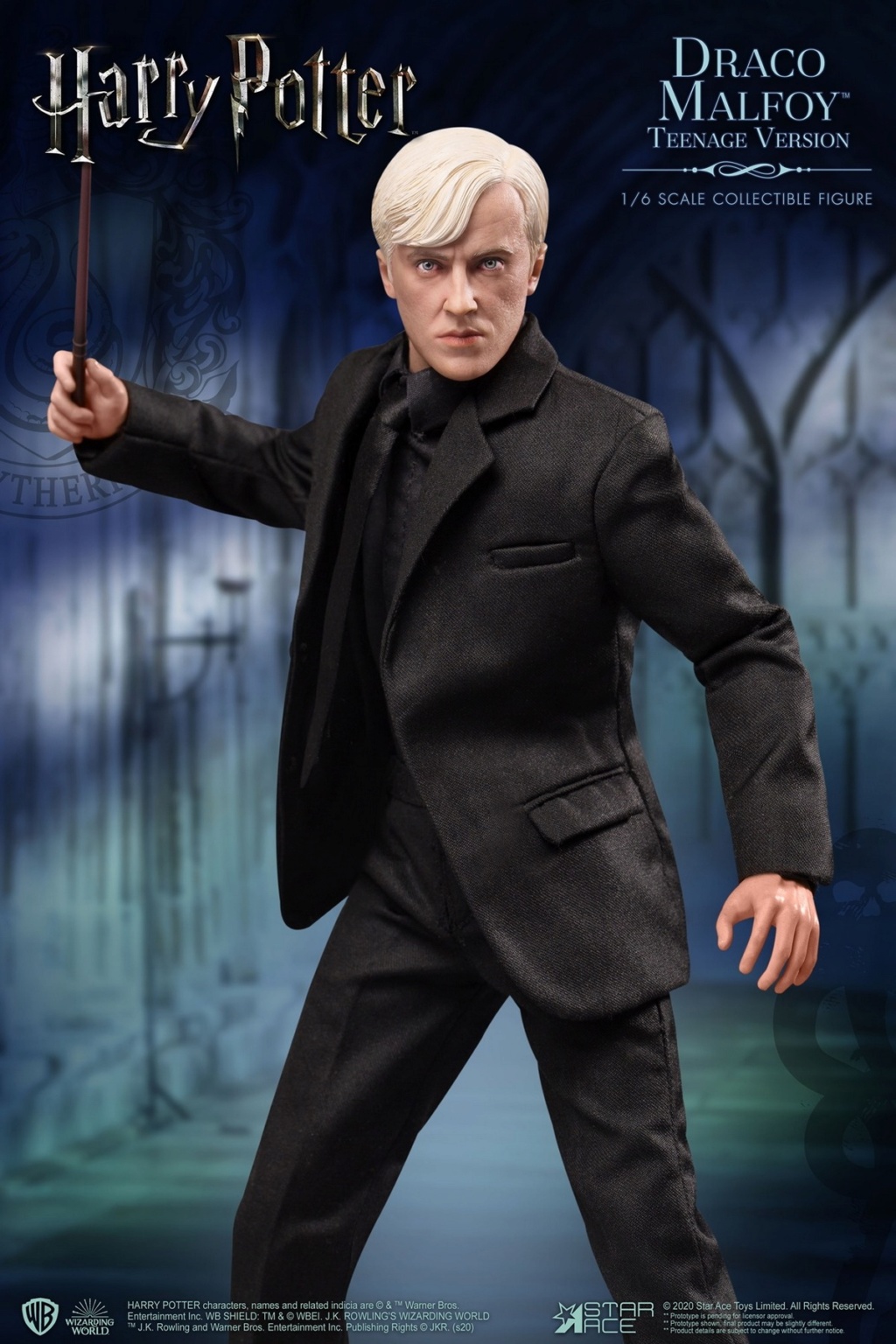 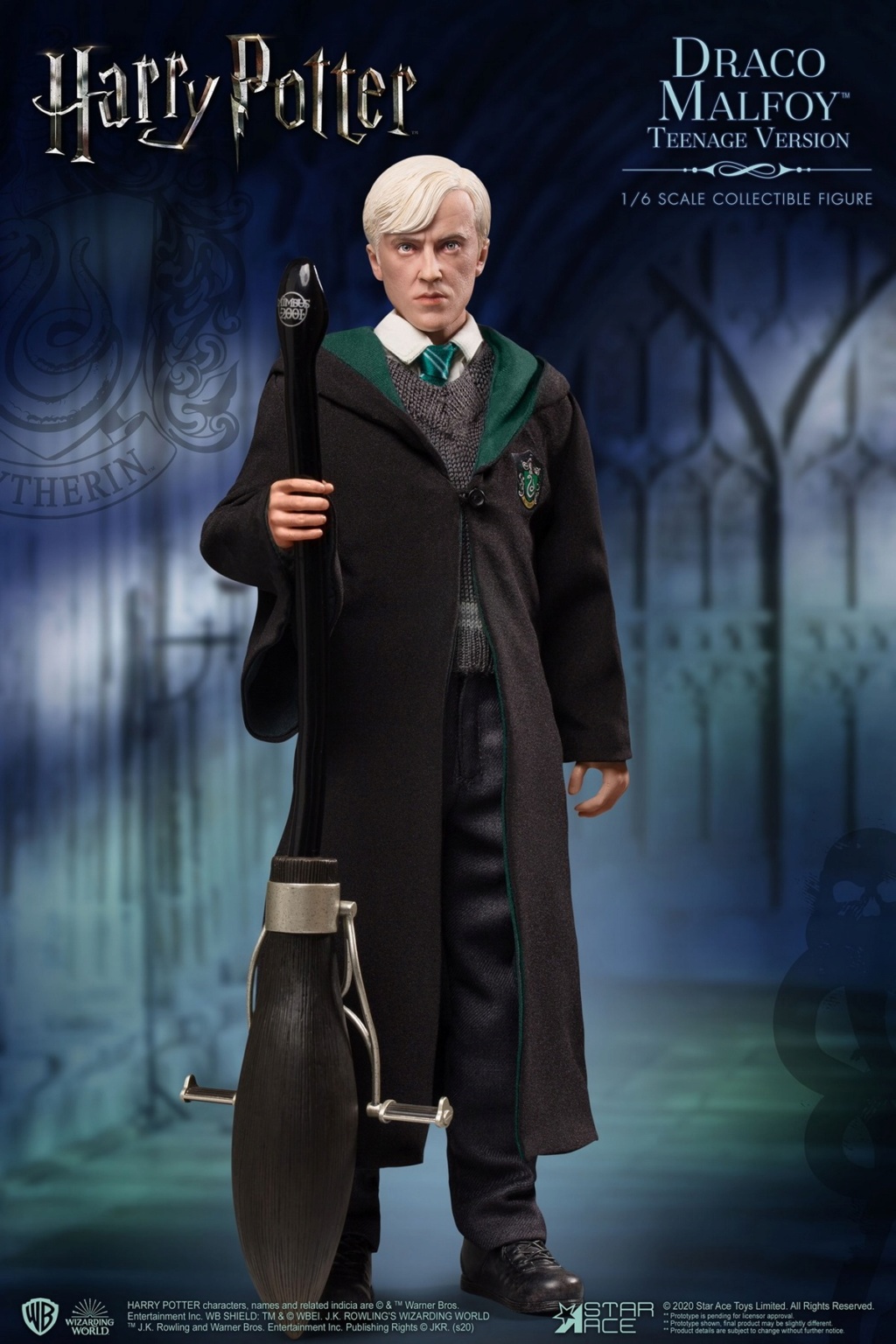 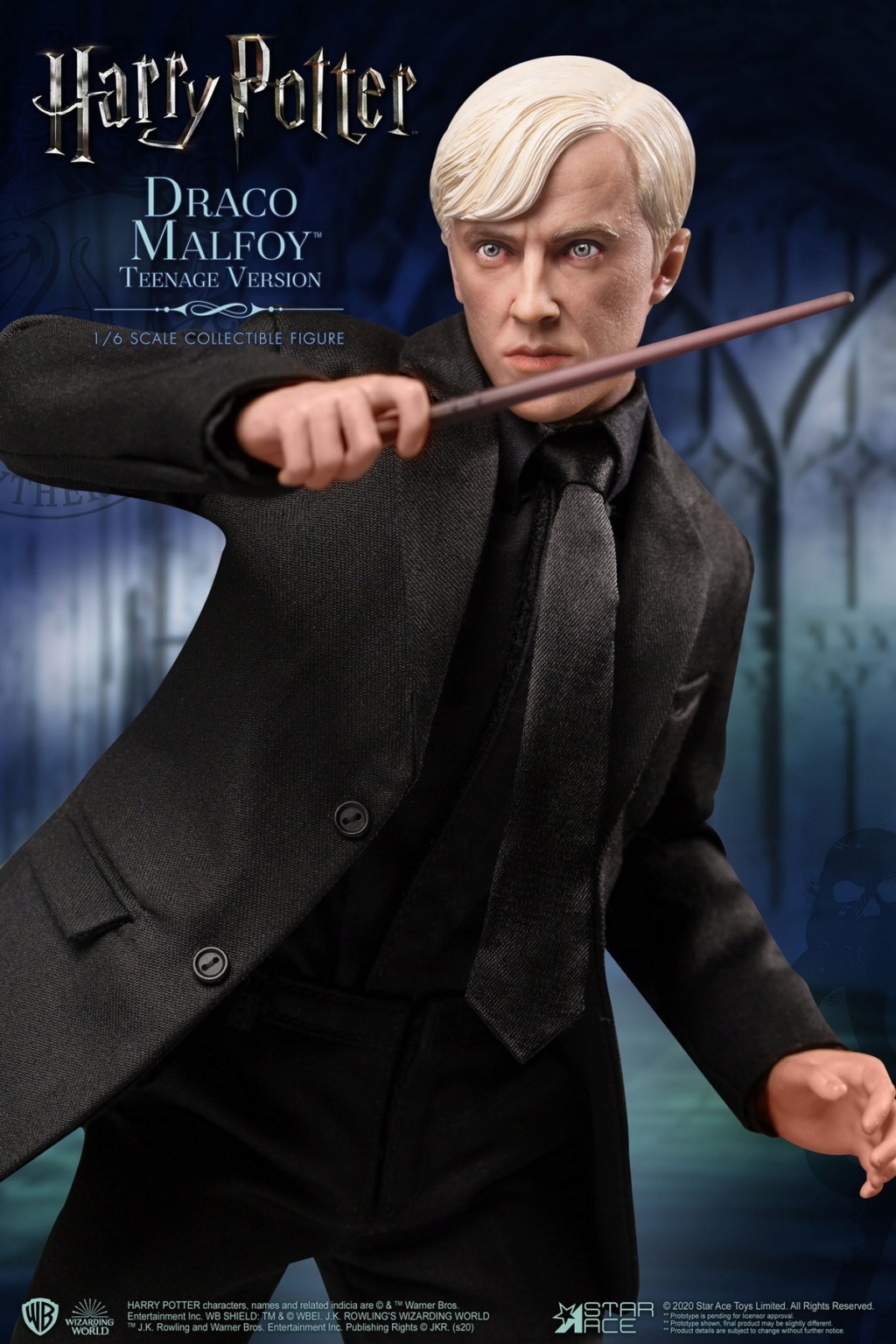 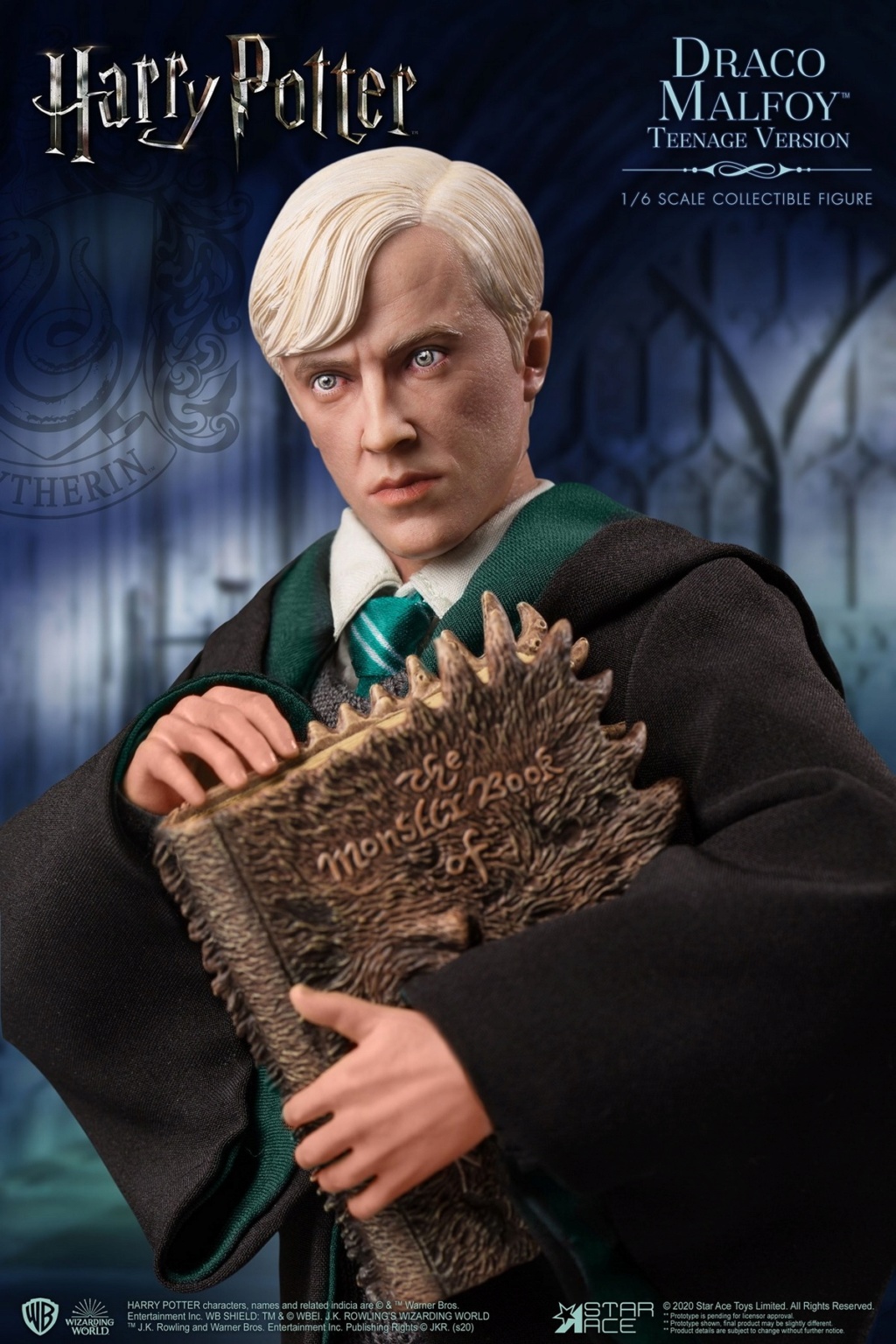 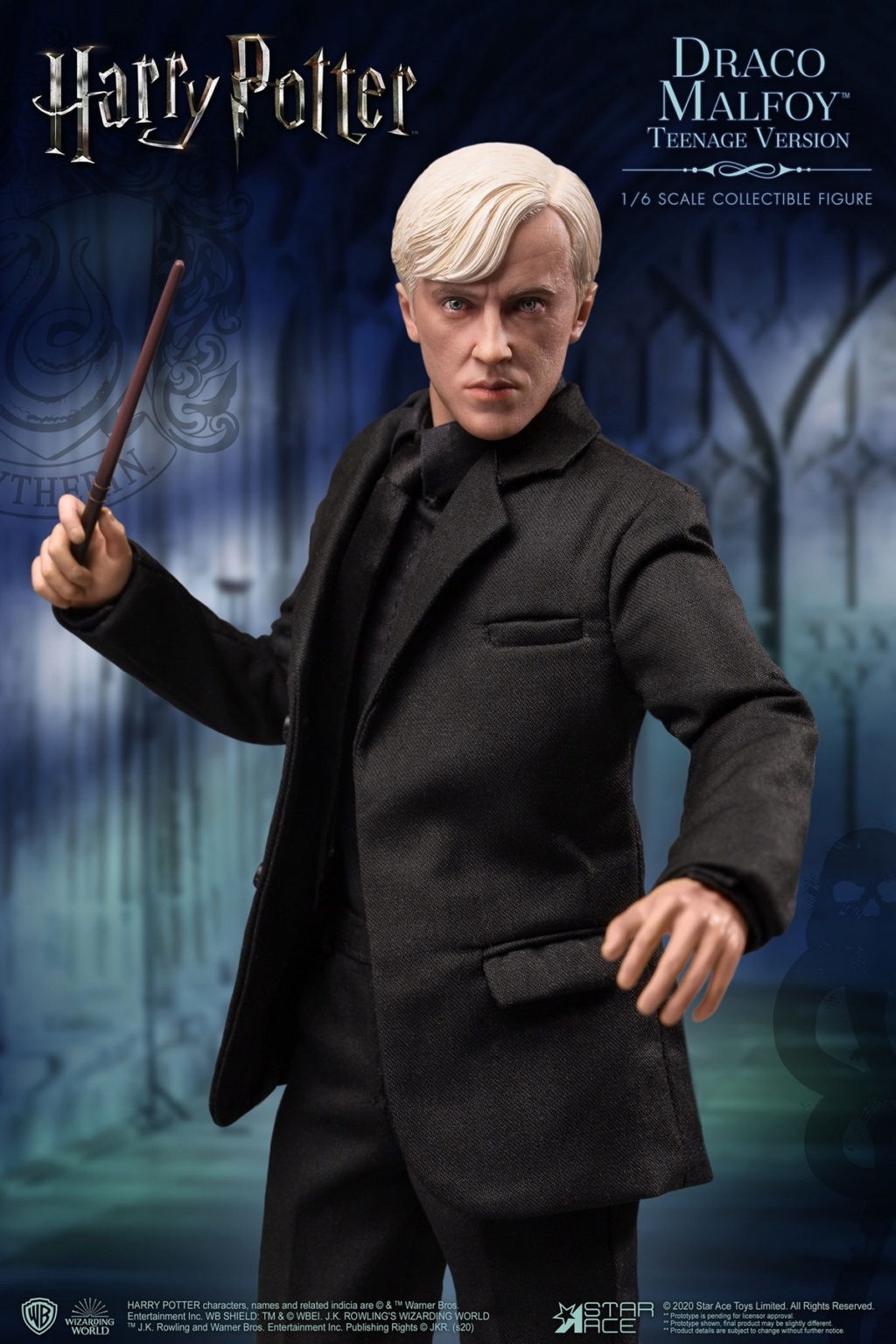 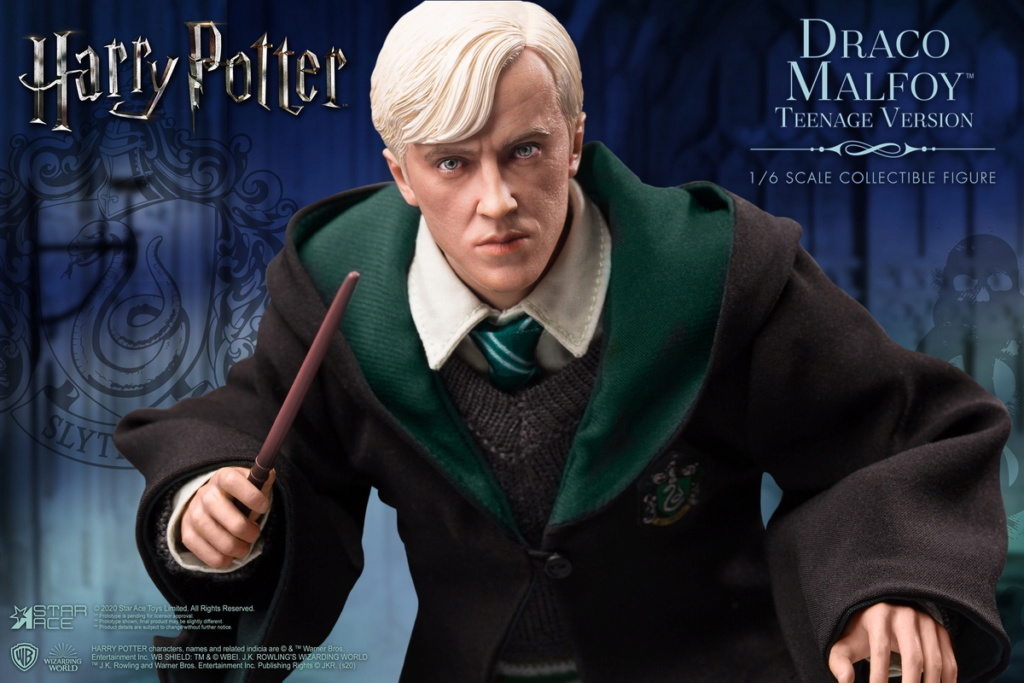 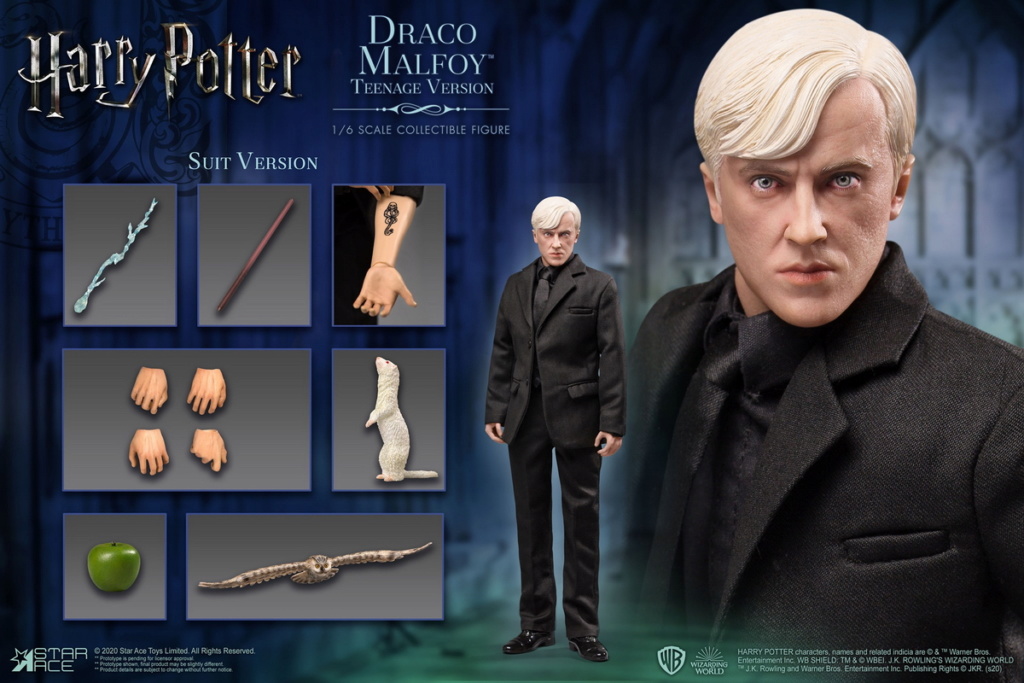 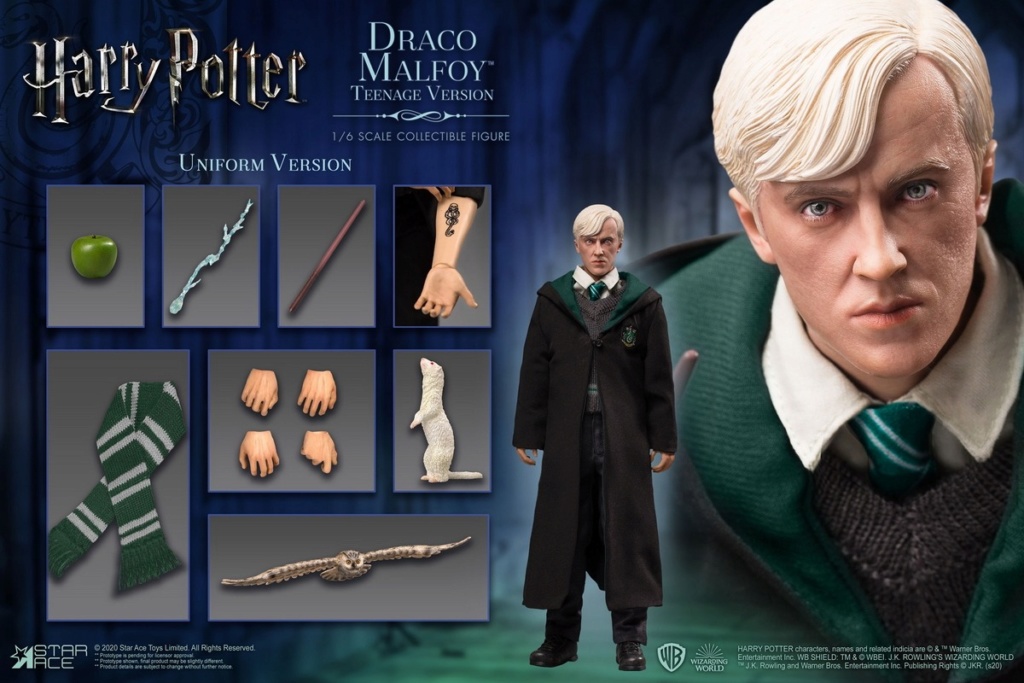 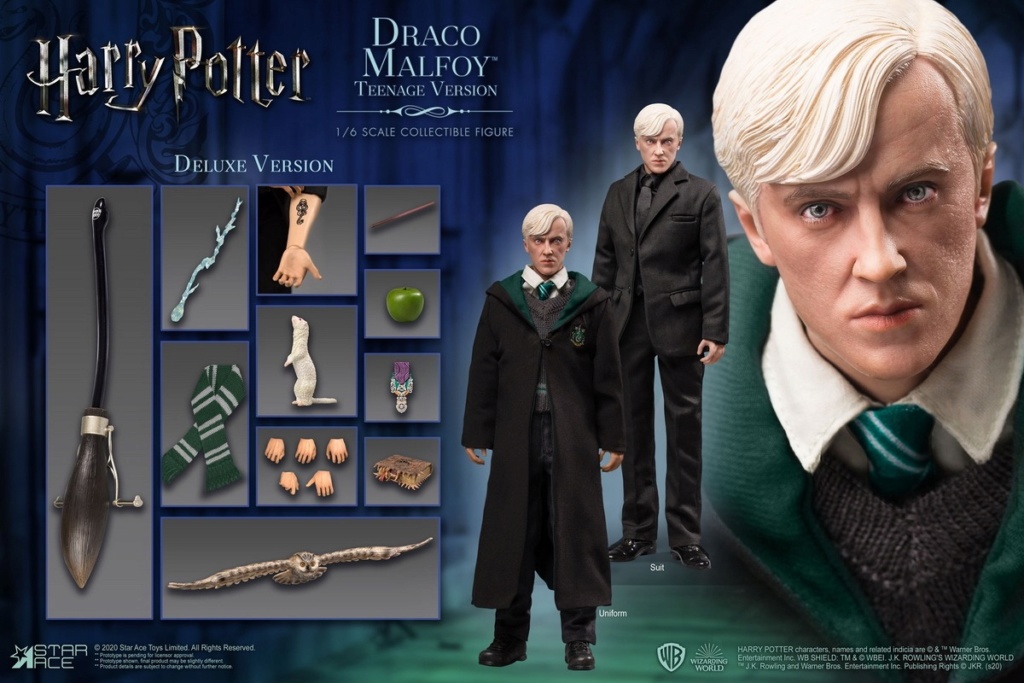 Founding Father
Posts : 7273
Join date : 2018-03-29
Location : Somewhere between myth and reality.
I better leave commenting on the accuracy of the appearance to actual Harry Potter fans. Looks like a pretty nice set, although the face appears older than teenage to me.
_________________
I'll be back!

Founding Father
Posts : 7273
Join date : 2018-03-29
Location : Somewhere between myth and reality.
Perhaps teenagers are difficult in more senses than one.

Posts : 308
Join date : 2018-06-05
I think the actor has a difficult face to depict in this form. He has a naturally "hard" sort of face and he is meant to look a bit evil. What I am wondering about is the length of the legs in the suit photos. He looks like he has great long legs and a little torso, but that may be an optical illusion.

Posts : 386
Join date : 2018-04-07
Doesn't look like a teen to me either but its a decent sculpt considering its from Star Ace.
I think it can also pass off as a young Rutger Hauer.