Making a neck connector from a Staedtler art eraser.  It works to solve two problems:

1. Ball joint on the skeleton is too small for standard neck connector and :

2.  Neck connector is very loose in the head and you don't want to glue it. 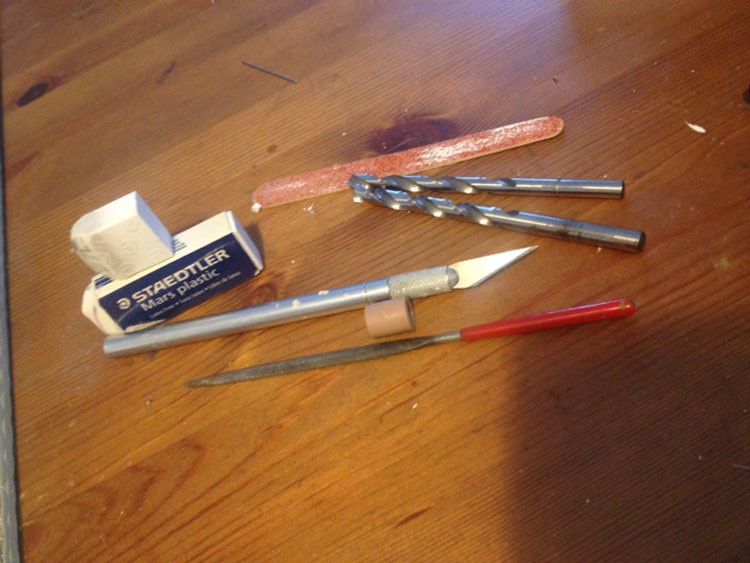 1. Soft plastic art eraser such as the Staedtler line. 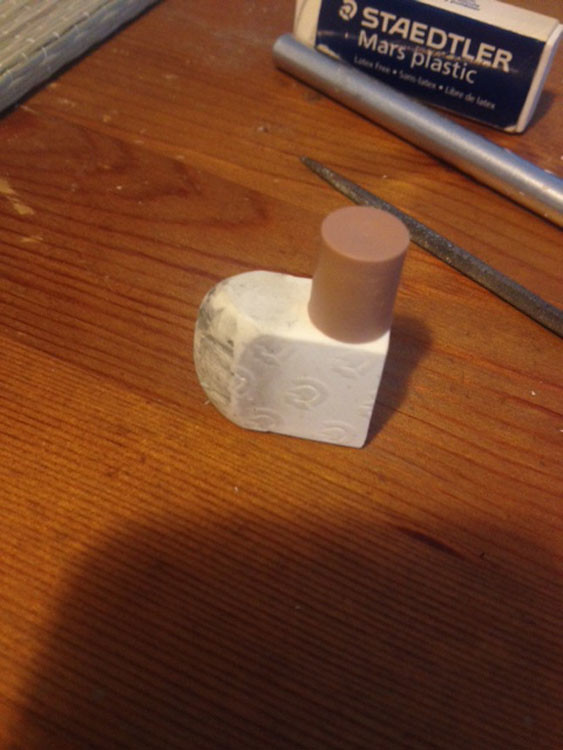 1.  Place a plastic neck connector on the eraser to measure how much you have to cut from the eraser. Cut carefully and slowly; the blade wanders easily. 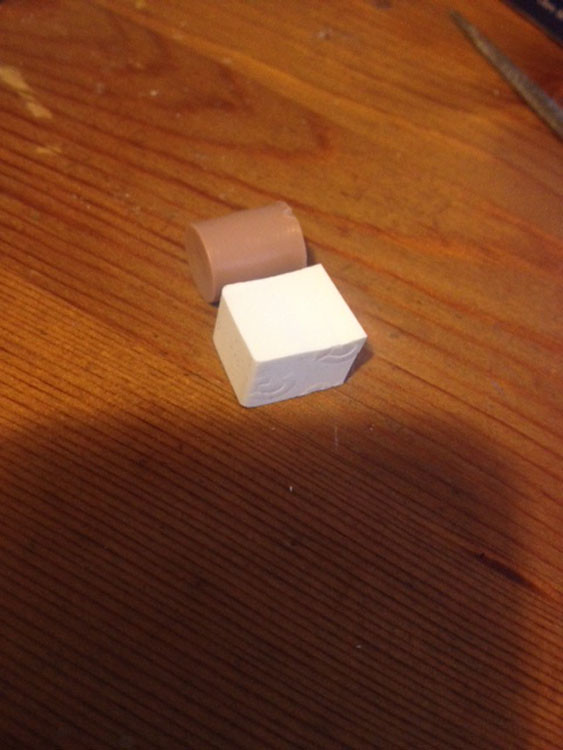 2.  Using the neck connector to measure in length now, trim off the excess length with the knife. 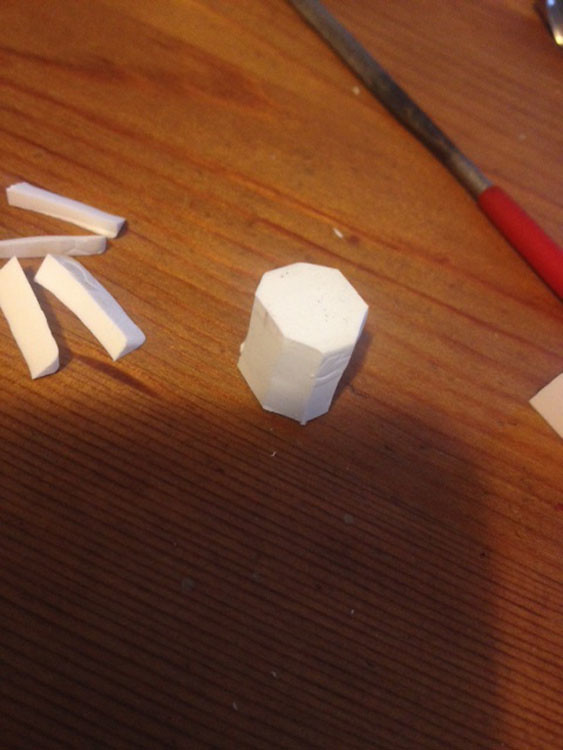 Using your hobby knife, cut the corners off the block of plastic so as to have an octagonal shape.  Your geometry does not need to be perfect here.  Test the fit into the head as you go along. You want it to be snug.


3. Using your file, sand the corners of your octagon to get them as even as possible then take your hobby knife and start a pilot hole for the drill bits. Using a succession of drill bits bits, dill a progressively larger hole into the center of the adapter. Drill all the way to the end.  Be careful to keep your "tunnel" as straight as possible.  Using a hobby knife, bevel both ends of the tunnel, leaving the middle tighter.  The lower bevel helps to insert the ballhead without breaking the soft plastic and the top bevel gives it a bit of space to breathe, so to speak after you've pushed the ball joint all the way through. 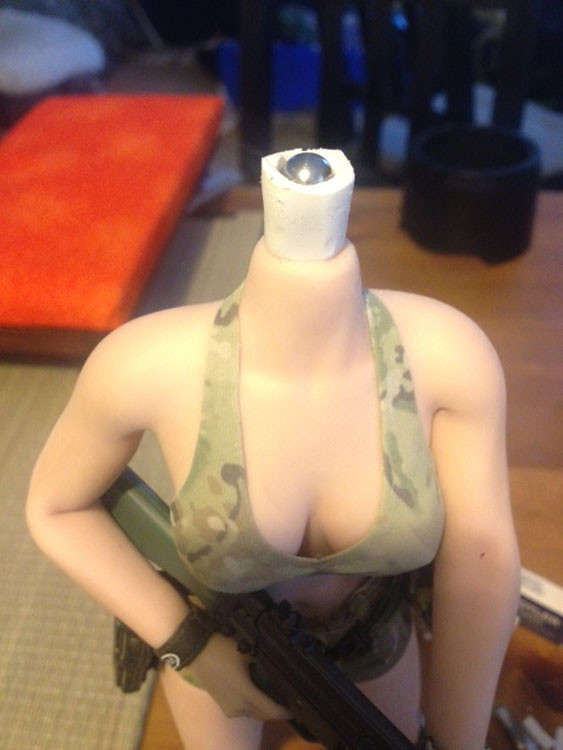 4.  Carefully place the connector on the ball head and pull it down with your fingers wrapped around it.  when placed it should look like in the photo. You are now ready to put the head on the figure.  If you've fitted it properly to the head, friction will keep it in place and the walls of the hole in the head should help keep it from breaking, as should the top bevel.  I can pick up this figure by the head and the body will not fall off.

If you have any questions, feel free to ask me .
Search in: TUTORIALS  Topic: Neck Connector Adjustment Tutorials (updated with Part II - June 2019)  Replies: 17  Views: 666

Okay, a small confession; I've been building this figure's outfit from bits and pieces of stuff parted out from sets to achieve the look I want, and up until this past Thursday, she was completely without footwear. Then finally the Agent Skye boots I ordered arrived and now, she is approaching completion, or at least ready to patrol the streets of some post apocalyptic trading town in the southwest of the US, which is where my little 1/6th scale fantasy mercenary company will operate during the period known to historians as "The Great Anarchy."

I wanted lace-up boots because this is one of the newer TB League smaller figures (S24A) and I reasoned that even if the boots were too big for her, I'd be able to compensate by lacing them up tight.  You can judge for yourselves if I was correct. The boots do appear a little oversize at the feet of course, but there wasn't much I could do about that.  I also wanted tall boots, because Rod Taylor wears tall lace-up leather boots in the film Dark of The Sun, which heavily inspired the style of the uniform for this doll, and because I reasoned that operation in the American Southwest, where rattlesnakes abound, tall leather boots would be seen as better protection from snakebite than standard issue desert boots, plus...would be a hell of a lot more fashionable to this very fashion conscious mercenary unit.

Overall, I'm pleased with them, though I suppose that being faux leather and from comments I've read from others, should be thoroughly washed lest they stain the figure, they will be coming off shortly for that purpose. After that, I'll have to grunge them up a bit...actually dust them up a bit, to make it look like our girl has been out on patrol. If anyone has any suggestion as to the best way of doing this, please feel free to speak up. One other point that should be made, it it's not immediately obvious to everyone, is that this sort of boot does restrict the movements of the ankle joint somewhat and can make some poses difficult to achieve. The one below took a bit of work for sure...


Finally, since this figure represents a member of an organized military / mercenary unit, raised and trained by a retired officer, I decided to give her a rank, (corporal) and given my own military background and stylistic preferences, decided her chevrons should be on the British / Commonwealth style and pointing downwards. They were made by using small sections of 2 mm white tape supplied by Antheads co. in the UK glued to a piece of khaki drill fabric that had first been stiffened by applying a fabric adhesive to the other side and allowing it to dry.  This also made it much easier to cut without threads parting in every direction. A template was then applied to the other side and the shape of the backing was drawn in pencil before being cut out with a sharp #11 Exacto blade.  Tiny little strips of tape were then glued onto the backing and cut down to size once the glue had dried. Finally, the completed set of chevrons was glued to the shirt. Again, comments welcome.

The figure is not quite complete however.  I can't imagine her patrolling in the southwest without a canteen. Also, she needs an edged weapon, and I think the perfect one would be the Dragon bayonet for the L1A1 rifle. I saw one parted out someplace and the same bayonet was designed in real life at least, to fit the Sterling SMG as well. I know, because I carried both the Canadian versions of both the rifle and sub machine gun in the Canadian Army.  I think she also needs a pouch for a least a few spare mags for her Sterling.  I'd also like to attach a lanyard between the butt of her pistol and her belt, but first have to find some string the right size.  I don't want to stick too much on her. I think less is more in this case. Again...opinions welcome.
Search in: General Talk  Topic: Post Apocalyptic Pinup Patrol Girl: Part II.   Replies: 21  Views: 570