I first posted this thread (actually two separate threads with a gap of nine months combined here into one) back in 2007 on SAG and 6th D. Now I'm going waayyy back in time. You might say that posting these threads was what first got me engaged in sharing with the 1/6 community, even though I had been in the hobby for a while already.

I've aggregated the posts and also added some more pics I didn't show before. Because of the length this is broken up into multiple posts. If you post a reply while I'm in the middle of getting all these posts out I may not respond until the end.

Please bear in mind that when I speak in the present tense in the posts I am referring to events in 2007-8. The project was a "great leap forward" in teaching me new skills at the time. It was also what got me into RC flying, as mentioned in another thread.


I got a serious case of "Schwimmer envy" last month before the new DML Schwimmwagen was rolled out. Believe me, I was sorely tempted to shell out the money to get it, but in the end paying $300 for a static model car was just too much, no matter how nice. So I took out my ol' 21C Schwimmwagen which had been buried in a closet for the last six years, and started thinking about what I could do to it with that kind of money. I decided I wanted to make it RC. Hey, it may be ugly, but at least it'll go! Plus with a little work maybe it won't look half bad, as many of you have demonstrated with your superb work on your own 21C Schwimmers.

With some help from the friendly folks at a local Hobbytown, I figured out that the components from a Traxxas Bandit are almost a perfect fit for the 21C Schwimmer. Of course, it has to be totally hacked apart to do that, so there's no turning back once you start!

The 21C Schwimmer is almost meant to be motorized. The cavernous spaces in the hood and the trunk that give the toy its unfortunate Dumbo shape, the incredibly durable plastic, the ugly but tough and true-spinning monster truck tires, the fact that the whole thing comes apart with screws--I'll bet they designed it that way so they would have the option of motorizing it like the Stuart. From what I know of taking apart the DML Kubel ambulance (yes I bought an extra one to cannibalize for parts), the DML Schwimmer probably is glued together REALLY well and is not meant to be taken apart. I think it would require a lot more work to convert one of those, and I dare say it might be too difficult to be worth it. Plus, it'd break my heart to hack apart something that cost so much and looks so nice!

Here are some pics I took as I was working. I'm actually farther along and need to take some more pics, but I thought I'd show these first.

That familiar "bathtub" chassis, before cutting: 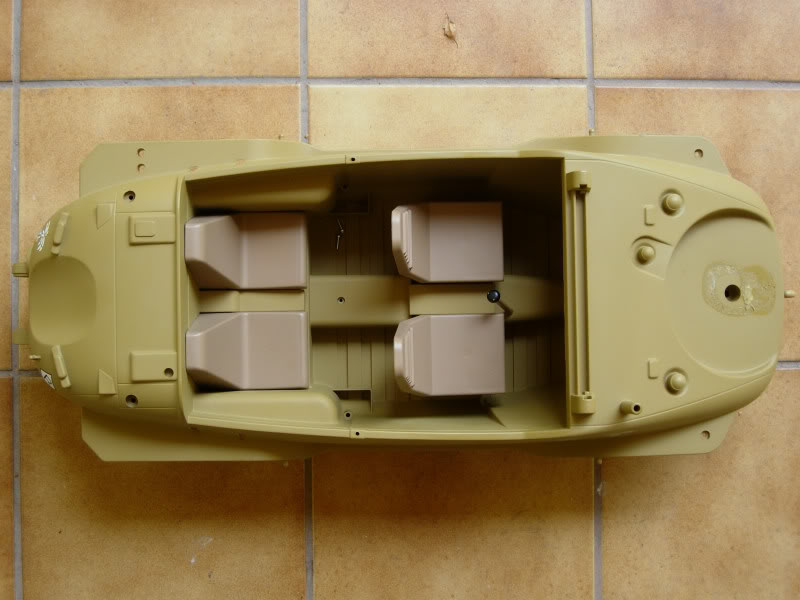 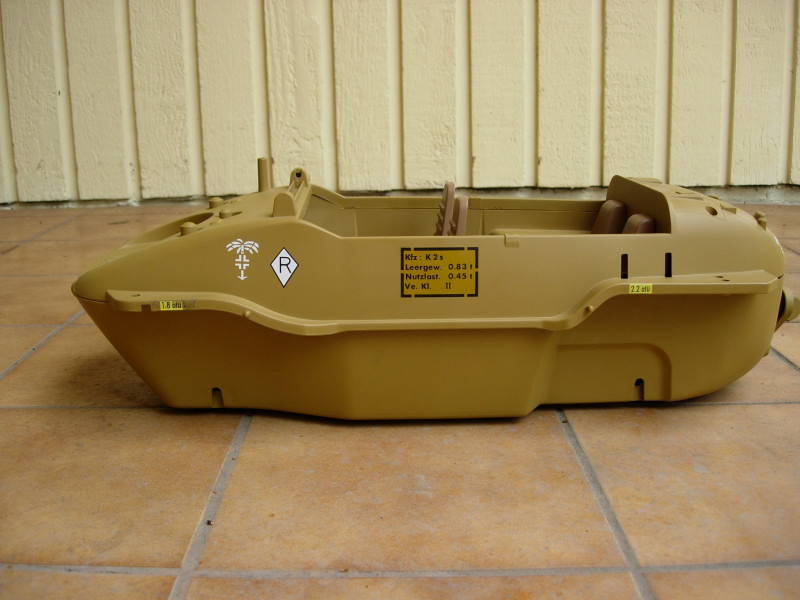 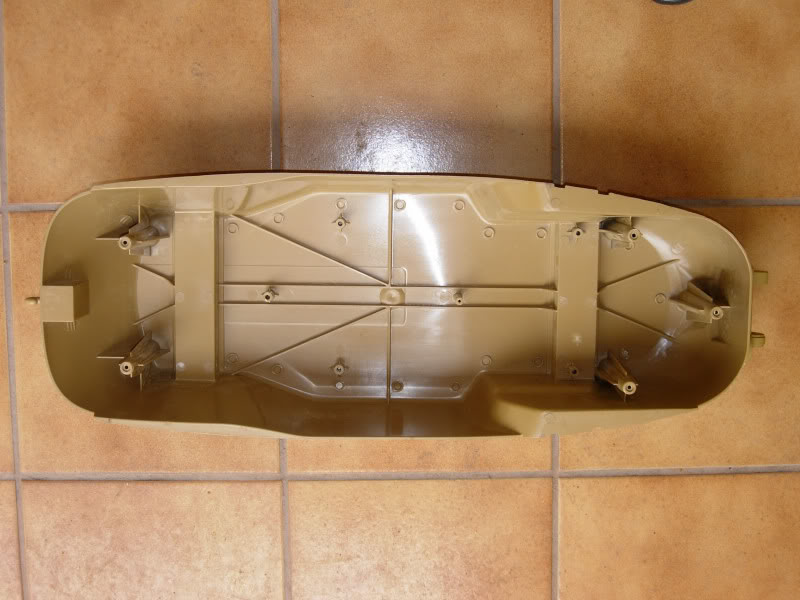 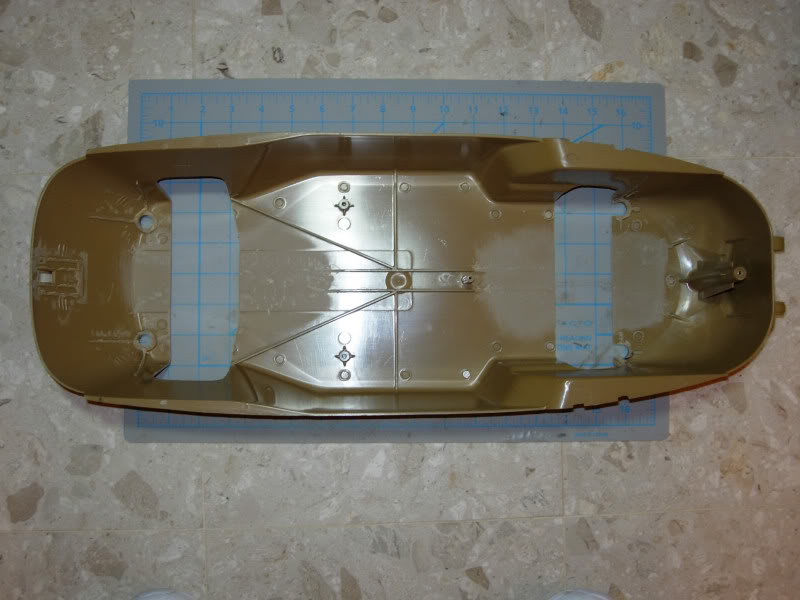 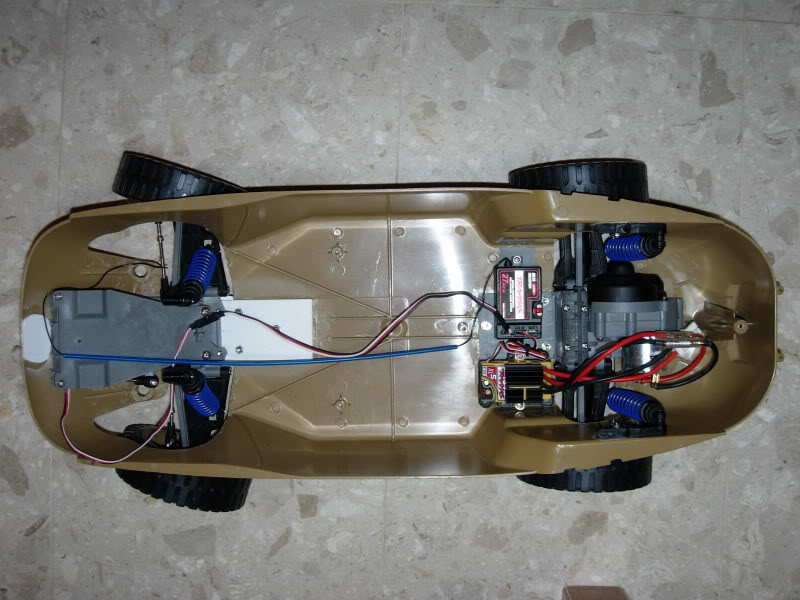 By the way, the steering servo and components were perfect for the Schwimmer! They are actually turned around so that the original front end of the Bandit faces the rear, and because of that car's unique configuration it can be mounted at an angle that fits PERFECTLY in the available space. And the shocks end up vertical, because they start out angled back on the Bandit. Here's a closer look: 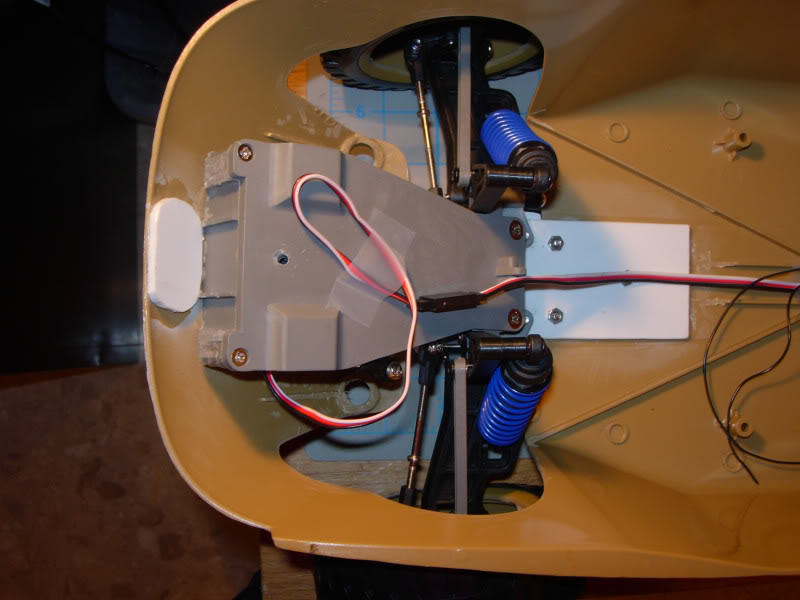 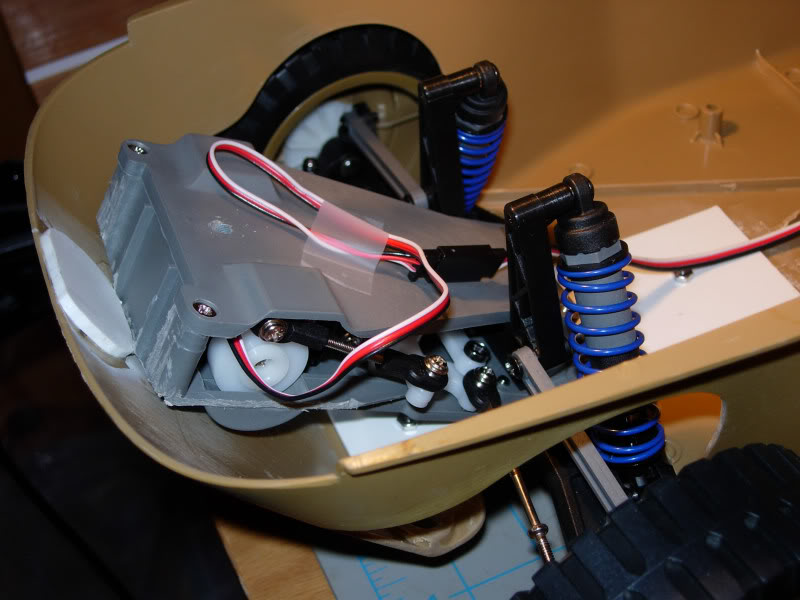 Here's a close up of the rear, with the transmission/motor, receiver and ESC: 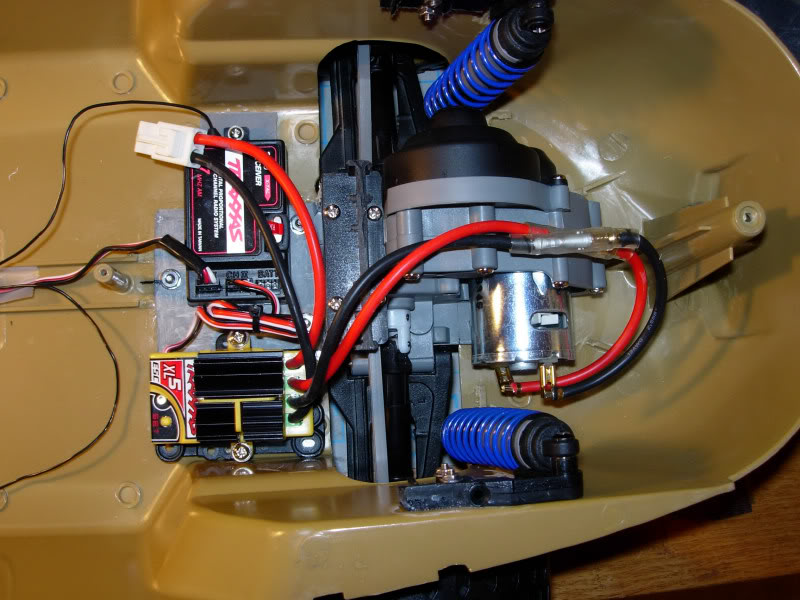 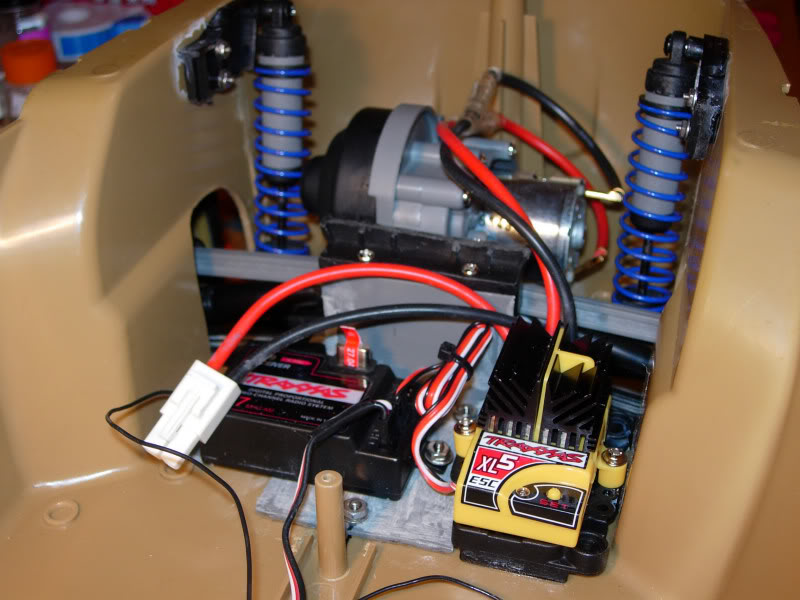 I ended up replacing the original Traxxas 12T motor that came with the Bandit, because that thing was WAY too fast. In fact, it's advertised as capable of hitting 35+ mph, although my own trials (I took it out to play with twice before its surgery!) suggest it was closer to 25-30 mph. That's a scale speed of 150+ mph! Considering the 1:1 Schwimmer had a top speed of 50 mph, and probably rarely went more than 30 or 40 cross country, and I had to find a motor with lower rpm but more torque. I went with one of those cheap silver can motors ($12), which has about a 25-27 turn that effectively cuts the speed by more than half with appropriate gearing. Still, even 12-15 mph is too fast, as it should be less than 8 to be scale speed. Luckily, the Traxxas ESC comes with a programmable "learner's mode" that chops the output by 50%, which drops the Schwimmer down into the range.