Having missed out on the CooModel Teutonic Knight (which were godlessly expensive) and losing patience with ACIs three variants (which have been on preorder for what seems like the better part of a century), I picked up one of China Toys' "Knights Teutonic" (an oddity apparently produced by analogy with "Knights Templar"). (I should probably note that none of the aforementioned products corresponds 100% to the historical illustrations of the Teutonic Knights I know.) Based on what I had seen and heard, I expected it to be a derivative but affordable piece, and in some ways that is exactly what it is. Given how basic this set is, it was not worth trying to assign points for the various categories, so the brief descriptions should suffice. Not all categories merited their own specific photos, but you should be able to spot most features in the images as a whole. Keep in mind that the Teutonic horse in my photos does not come as part of this set, but was produced by ACI. 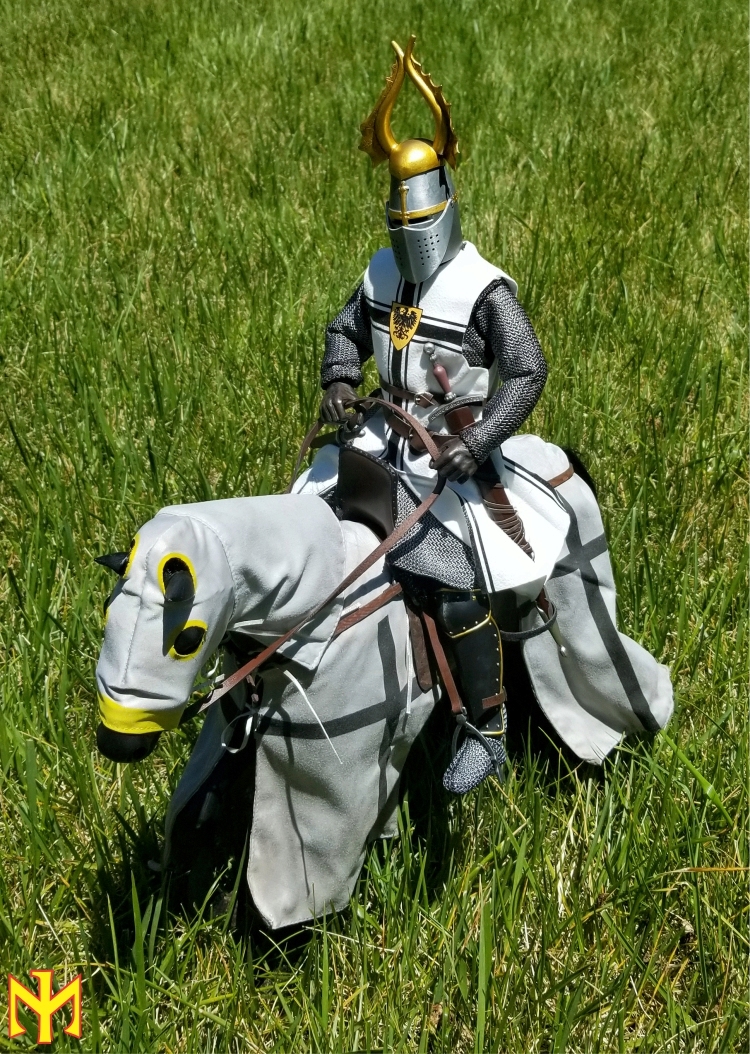 My Teutonic Knight arrived in a plain cardboard box with only a small white sticker with Chinese text and the product code ZH011 (misspelled ZHO11) on it -- ZH is presumably the abbreviation for Zhongguo ("China"), this being "China Toys" and all. There isn't much to show, so I will skip the photo. I don't particularly care about the boxes, but they are not even trying. Their Greek hoplite came in a similarly minimalist packaging, but they had printed out a photo of the promotional image and glued it to the front of the box in that case. Inside the cardboard box was a thin lid and two treys of black foam, containing the figure and accessories. Everything was safe, but certainly not snug, because the cutouts were clearly designed for a different figure and different accessories -- apparently those of the hoplite set. If I were in the business of displaying or collecting boxes, etc, I would ave been sorely disappointed by the packing. But it does the job of protecting the contents, which is what I was after. 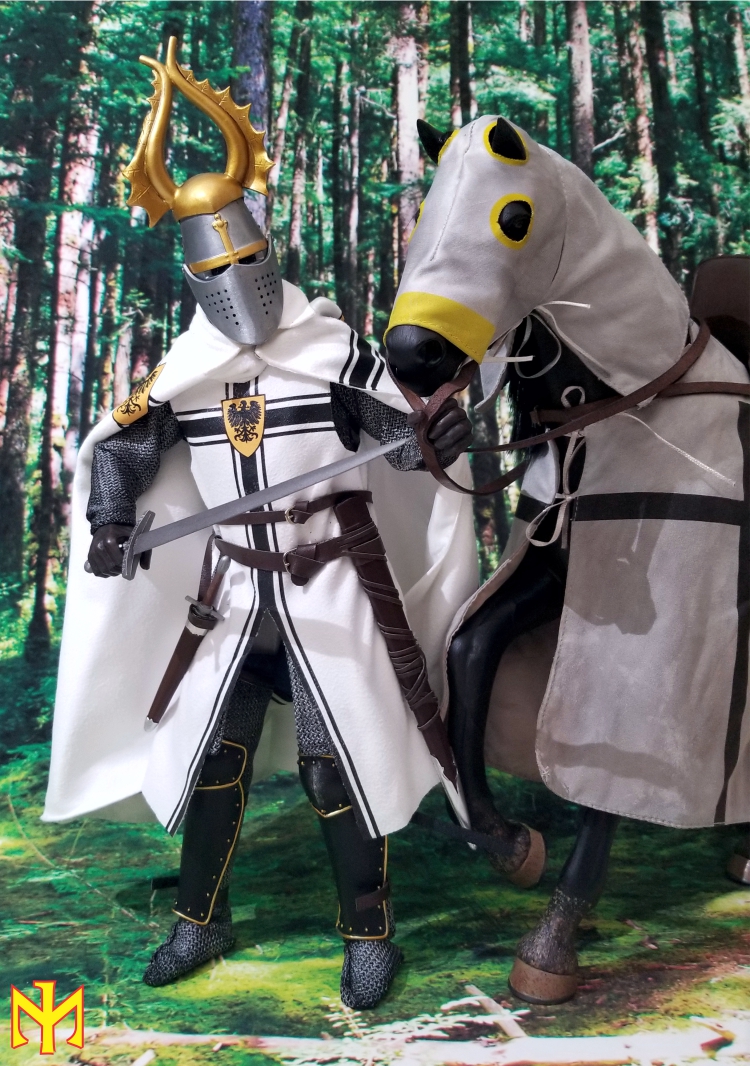 The set does not include a real head sculpt, just one of those black under-helmet heads without ears that we have seen included in some such sets before. At this point it is stuck in its mail coif and helmet, and there is little to see anyway, even though the helmet's face plate can lifted to expose the face from below. The helmet, sword, and dagger are metal, everything else plastic or cloth. The molded plastic includes the body and the gloved hands, the greaves (shin guards), the scabbards (sheaths) for the dagger and sword, as well as the helmet's decoration. The gloved hands are annoying hard plastic, while the helmet decoration is so soft that on one side the bat-wing-like detail has partly warped. The quality of the sculpt is pretty good throughout. Perhaps the most impressive small detail of sculpting (or rather molding) is the inscription in hoc signo vinces ("by this sign though shalt conquer") on the hilt of the sword (see under Accessories below). 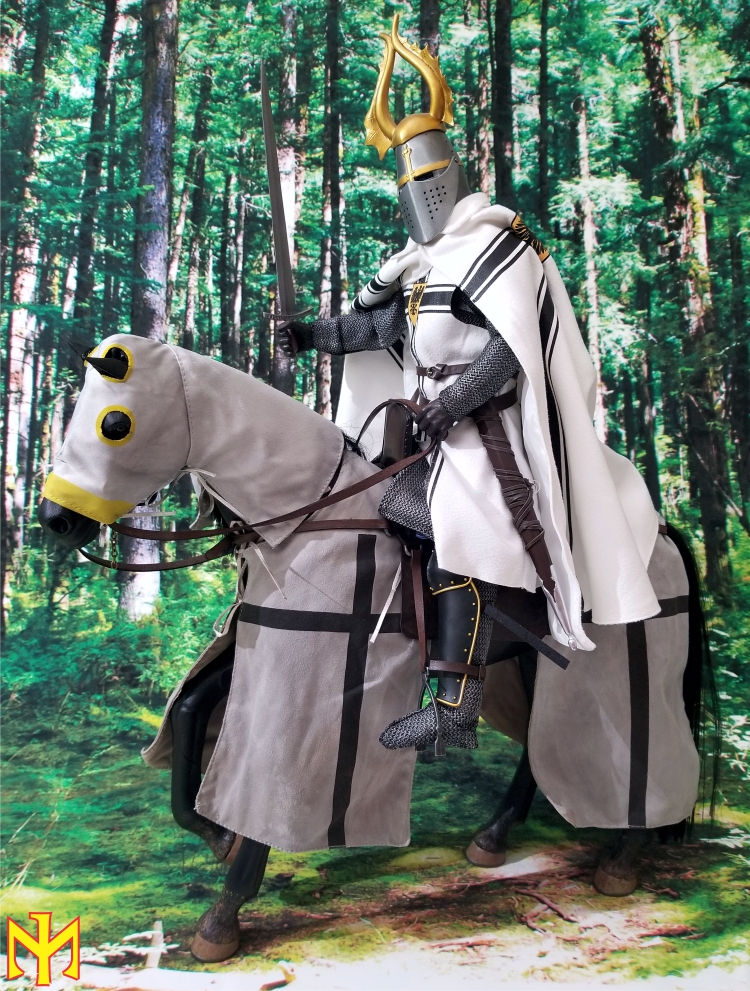 Most of the paint work is pretty basic and fairly decent. The areas where imperfections are most obvious are the weapons and scabbards. A customizer could easily fix these issues. There is little in the way of weathering (for example on the knee caps of the lower leg armor), but the metal pieces look about right. 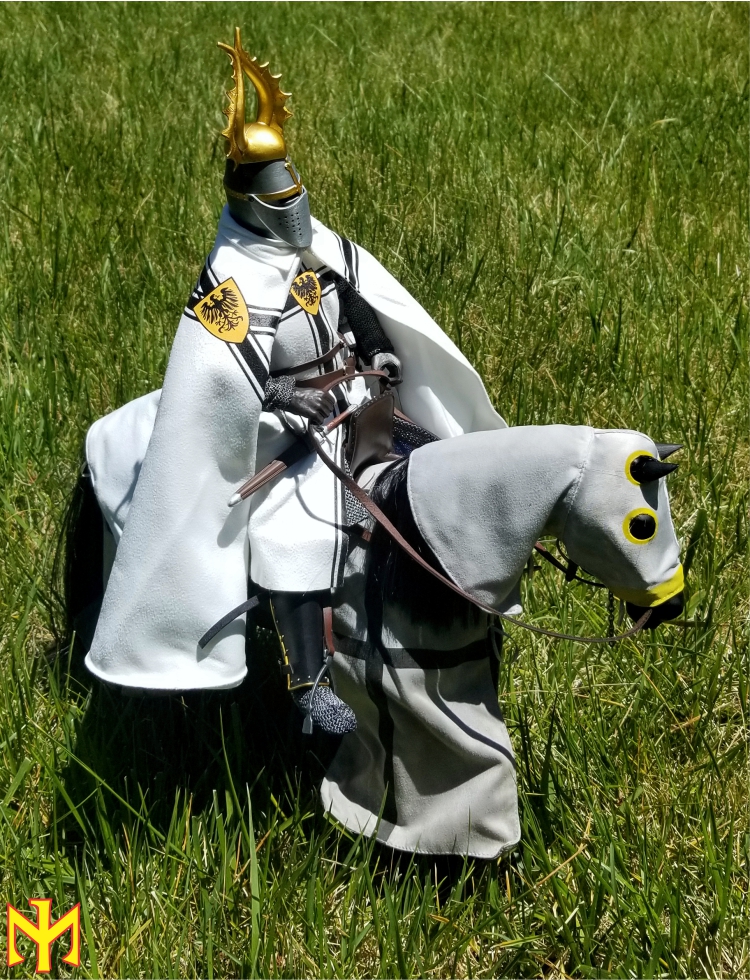 The range of motion of the underlying body is surprisingly good, especially under the layers of cloth vestments and armor. Also surprisingly good is its ability to stand and keep a pose, at least for a little while (or maybe longer, but I didn't give it the chance) -- my photos don't show you the full, virtually unimpeded range of movement. That said, the knee joints especially are a little loose for my taste. The gloved hands come off of the wrist pegs far too easily -- at least in the case of the right one in my set. Depending on one's needs and preferences, with some effort a customizer should be able to substitute a different body of his/her choice. 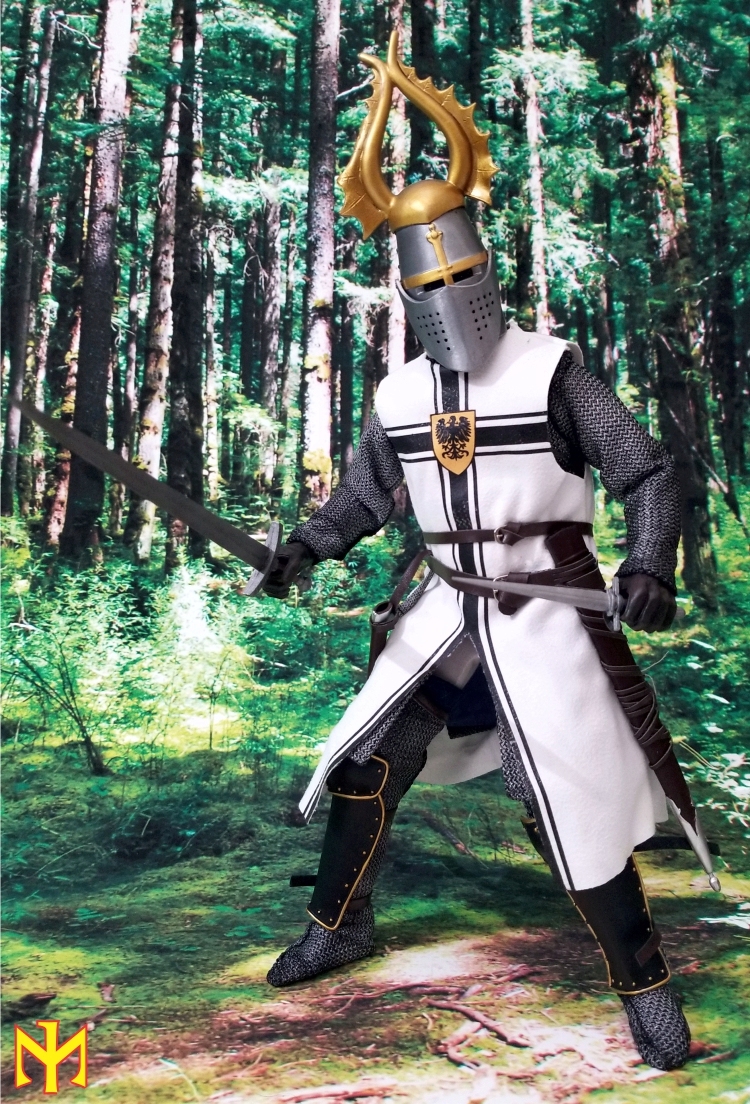 In this category, the figure is severely limited to the bare minimum. As noted above, there is no separate, "unmasked" head sculpt, unlike many similar sets by other companies. There are also no alternative hand sculpts to the two gloved sword-holding hands that come on the figure in the box. There are the helmet, greaves, sword, dagger, their respective scabbards, two belts and other straps and loops. These required some research on my part to figure out and set up more or less correctly. The thinner belt simply goes around the surcoat. The wider belt connects to the strapping that winds around the sword's scabbard; the wider belt also carries the loop for the dagger's scabbard. The CooModel and ACI sets included (between them) a variety of accessories you would not find here: shields, vambraces, fur caps, spears, banners, maces, axes, flails. There is also no action figure stand. I imagine these economies went a long way to keeping costs down.

Since I relegated the molded pieces to accessories, this category includes the soft goods (belts and straps excluded). Since they are made of a sort of woven synthetic fabric, the outfit includes the "chain" (really ring) mail items, namely the haulberk (armor tunic), separate mail coif (hood worn under the helmet), and chausses (covering the lower legs and feet, largely under the greaves). The pattern does not look quite convincing to me up close, but from a distance it certainly conveys the impression of "chain" mail. The items made of cloth and representing cloth include the white cloak with black cross and shield crest patterns on it, the white surcoat (outer tunic) with matching black cross and shield crest patterns on it, a blue padded gambeson worn under the haulberk, matching leggings worn under the chausses, and white breeches. While some of them are more basic than others, all the cloth items seem to be pretty well made; the most glaring exception is probably the unsightly seam on the sides of the haulberk (luckily they only go on the inside side of the sleeves, allowing them to go mostly unnoticed). 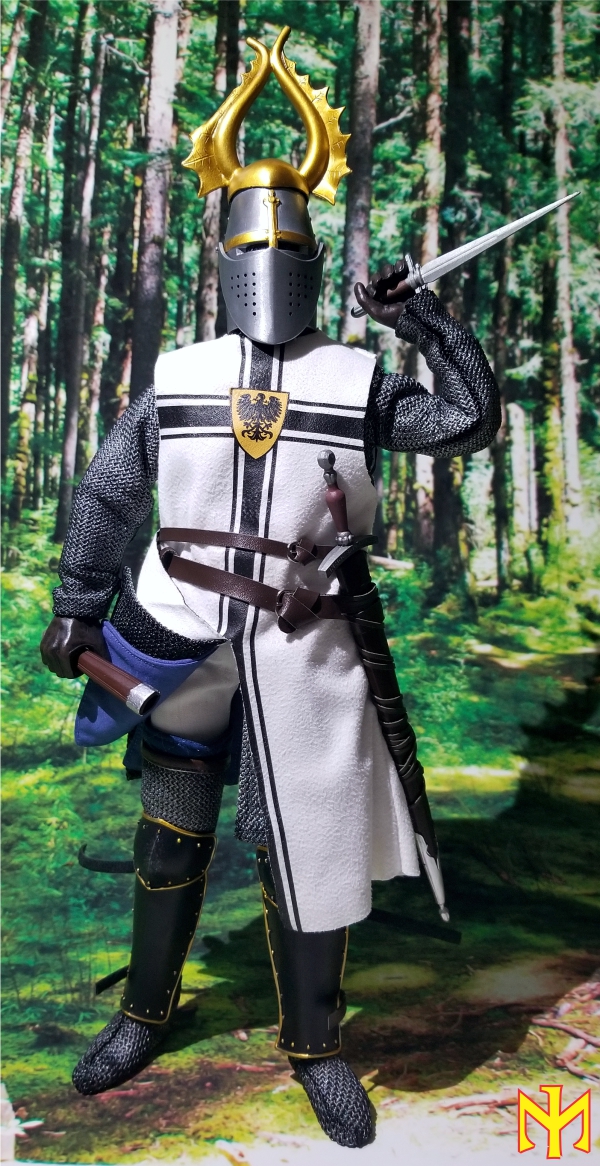 Fun Factor and things to watch out for

Despite his limited accessories, the Teutonic Knight is well-attired, well-articulated, and overall looks quite good. Find him a horse, some buddies or rivals, or kitbash some enemies (Saracens? Slavs? Lithuanians? lots to choose from, none of it made yet), and you are well on your way... though I suppose a shield would not have been too much to ask for. Generally speaking, I had no concerns handling this figure and its accessories. Apart from the head being pretty well stuck in the helmet and coif, the only real annoyance was that when trying to force the sword into the irritatingly hard gloved hands I managed to snap off its blade where it meets the hilt. Some Gorilla super glue and a few hours later, the weapon -- and the knight -- is fully armed and operational. 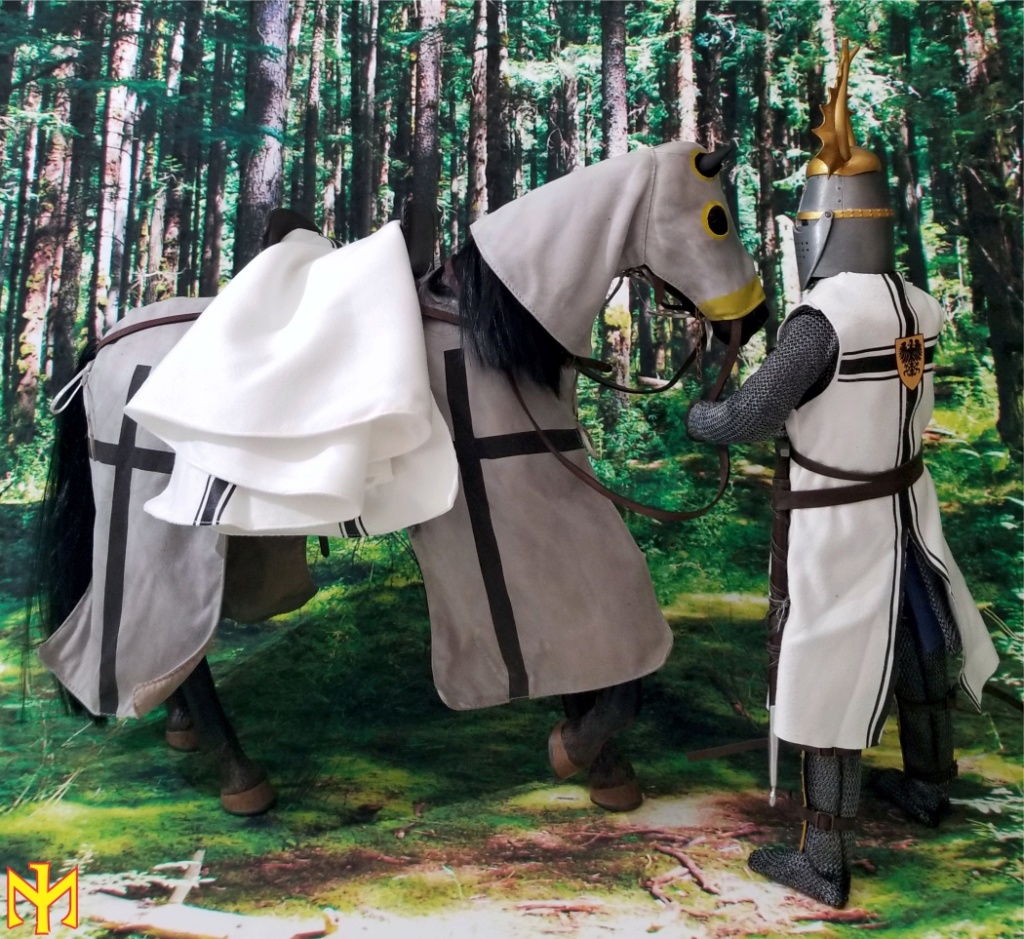 In this category, this set is a winner, at least relatively speaking. There was a time when a high-end company could produce then-high-end licensed products for $80 (USD), but this time has long gone. This is not licensed and not as rich in accessories as some of its (theoretical) alternatives, but if you are lucky you can get it for around $90 (though in most cases this would not include shipping, which would often bring it up to about $110). That is substantially less than the alternatives -- leaving aside the much more expensive and long sold out CooModel set, ACI's run between $210-255 (not including shipping), but most of the preorders have already been sold out for a long while; Admittedly, the alternatives do contain more accessories, real "unmasked" head sculpts, and we can probably expect higher quality with them than with the present offering. But if your needs are more basic and if you are ready to customize or kitbash away any limitations or imperfections, this is probably a relatively decent deal. 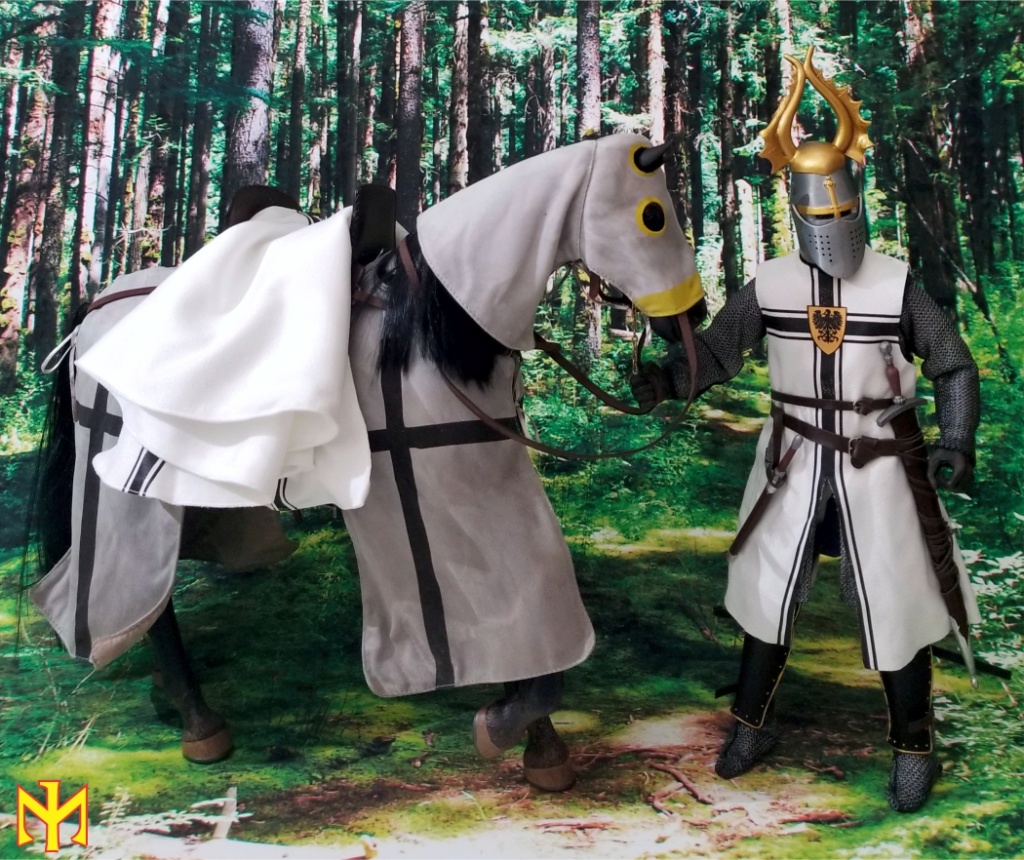 This set is clearly more limited in extent and inferior in quality to some of the related higher-end products. But it also looks and performs decently, and at a substantially lower cost. Without being an exact duplicate of it, the present set closely resembles ACI's "grand commander." Since that is a convention exclusive, more expensive than ACI's other two Teutonic sets, and perhaps rarer (if it ever sees the light of day), this China Toys set might be a viable enough substitute for that figure. Similarly, it might be suitable for limited army-building and certainly lends itself to kitbashing and customizing (as I have noted repeatedly throughout the review). I realize I have been fairly easy on this product, because I realized most of its limitations from the start and I looked to it as a stopgap and affordable alternative to what was either unobtainable or not yet produced; and I suppose I was looking at it as a source for kibashing and customizing all along. That said, there is plenty that is good or passable here, while there is also plenty to be desired.

I would recommend searching on eBay for 1/6 and Teutonic (the official name of the product is misspelled as "Knights Teutonic"). One of the few online retailers in the States that still has some available (i.e., not sold out or wait-listed) preorders of the ACI Teutonic sets is Cotswold Collectibles.