I thought I'd celebrate the return to functionality with the PB pics debacle by going waaay back and posting my first major customized figure that I did over 10 years ago. I reposted this a few years ago on OSW but here I'm reaching back to the original post I made on 6th D. [pics are actually updated and new]:


I've wanted to do this figure since I first laid eyes on the photo at least six years ago. [note: that actually means 2002, since I first posted this in 2008!] 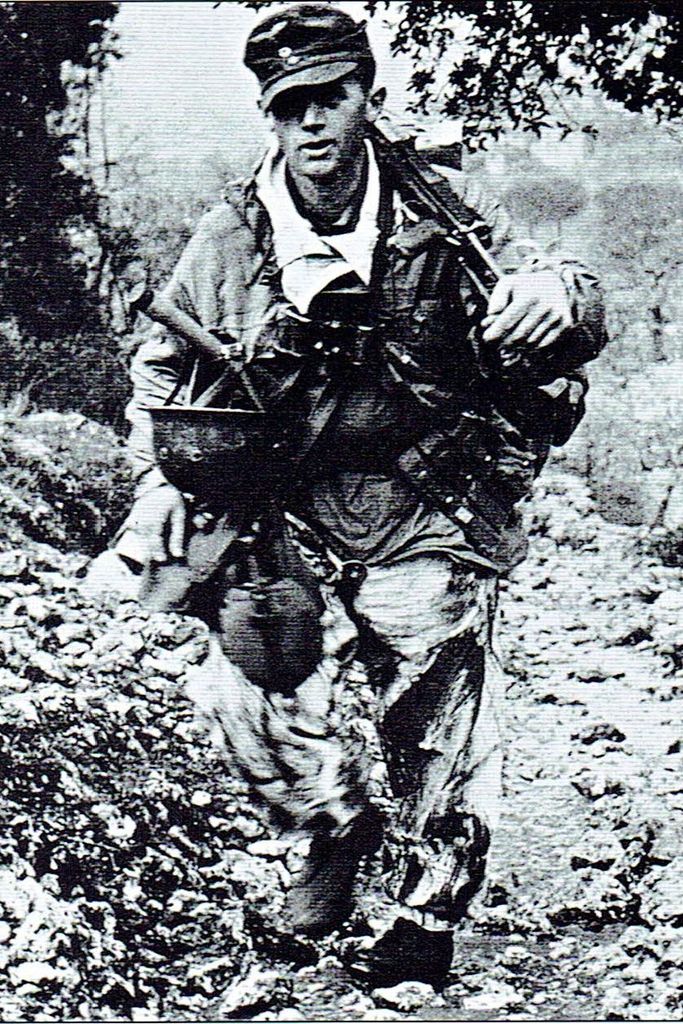 I started to do the figure but could never really finish it off; as my skills improved I kept wanting to go back and improve it, especially with the weathering. Plus I wanted to add a vignette base, which I finally did recently. Here's how it finally turned out: 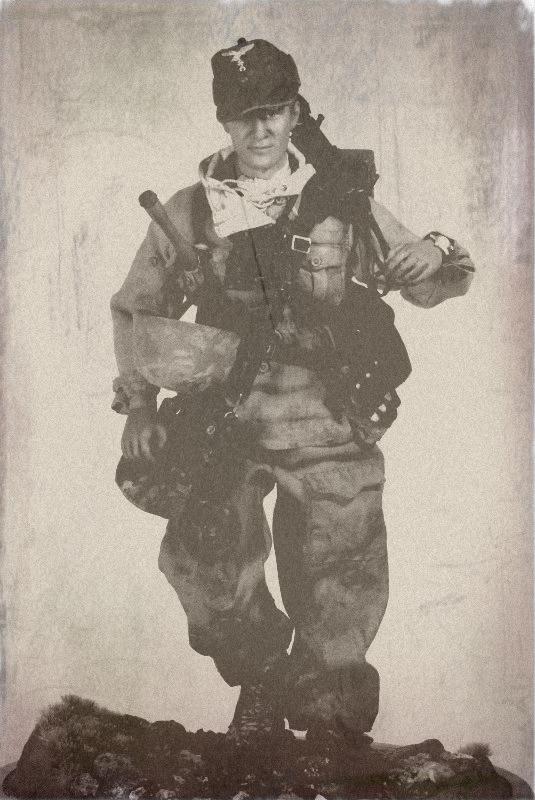 And here are some color and detail shots: 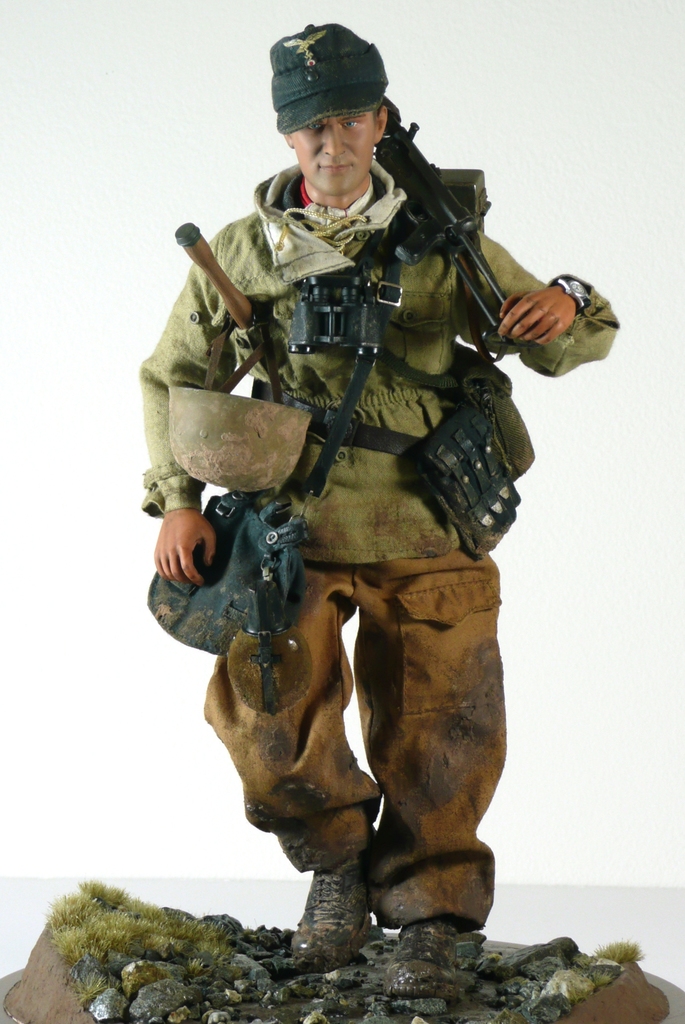 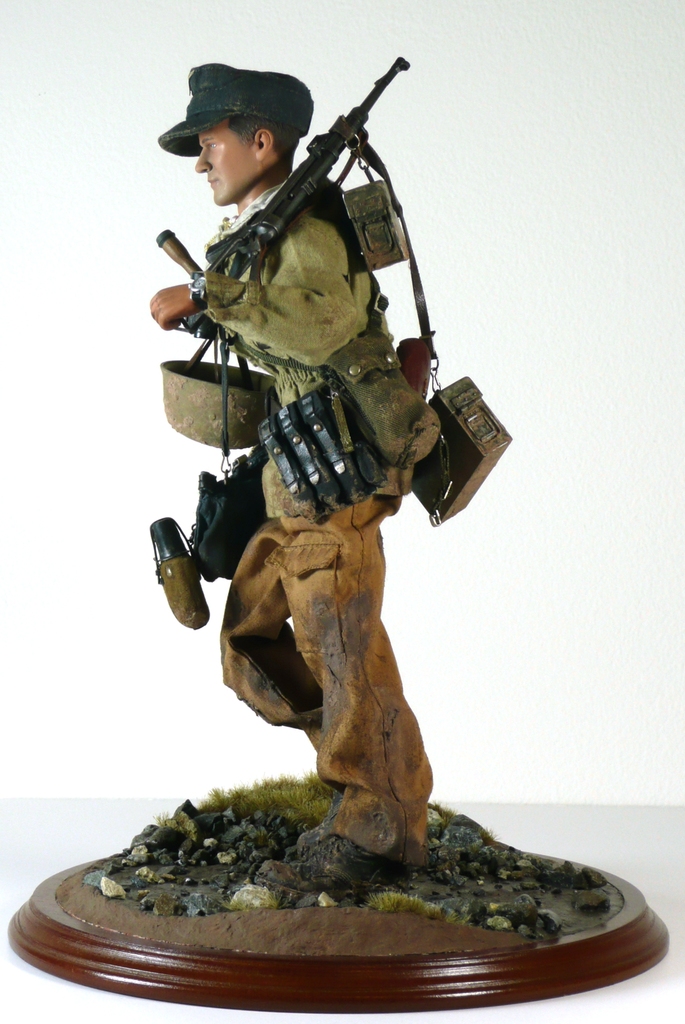 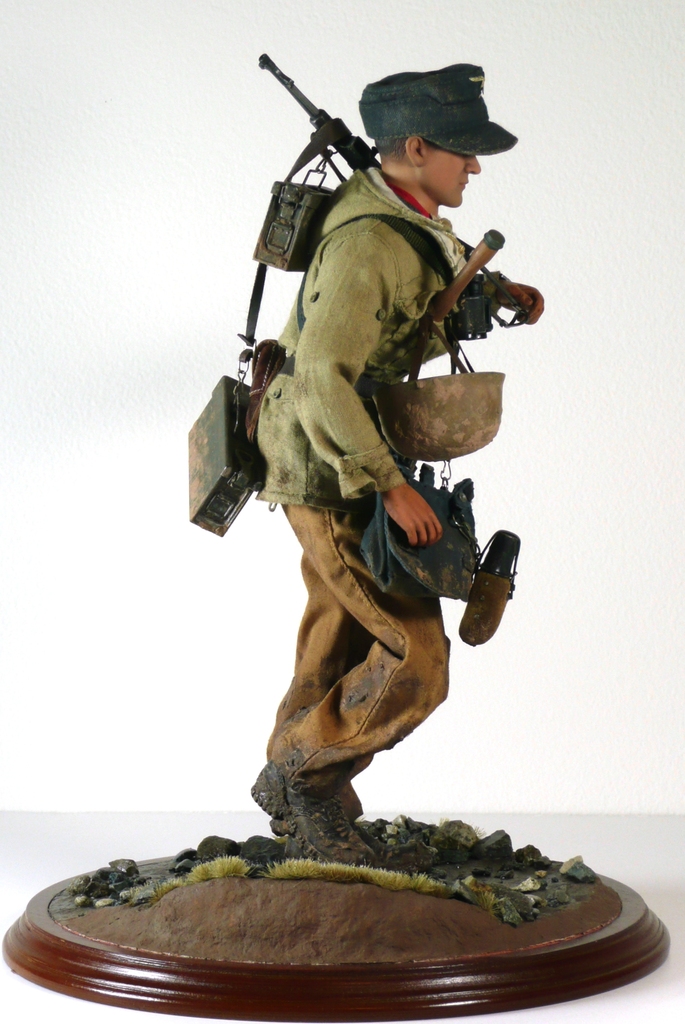 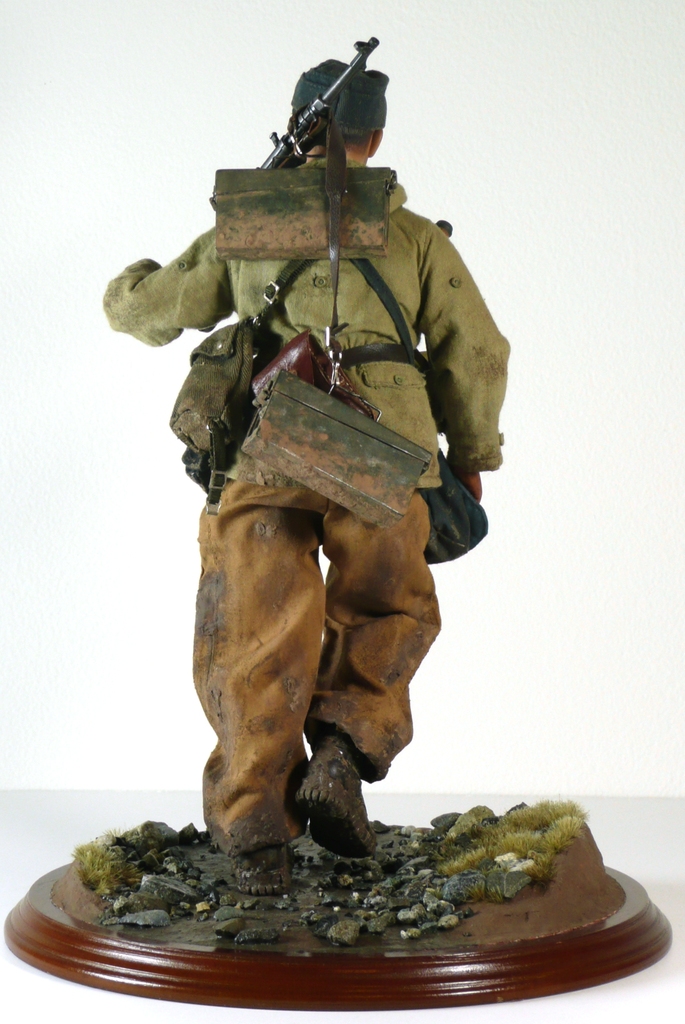 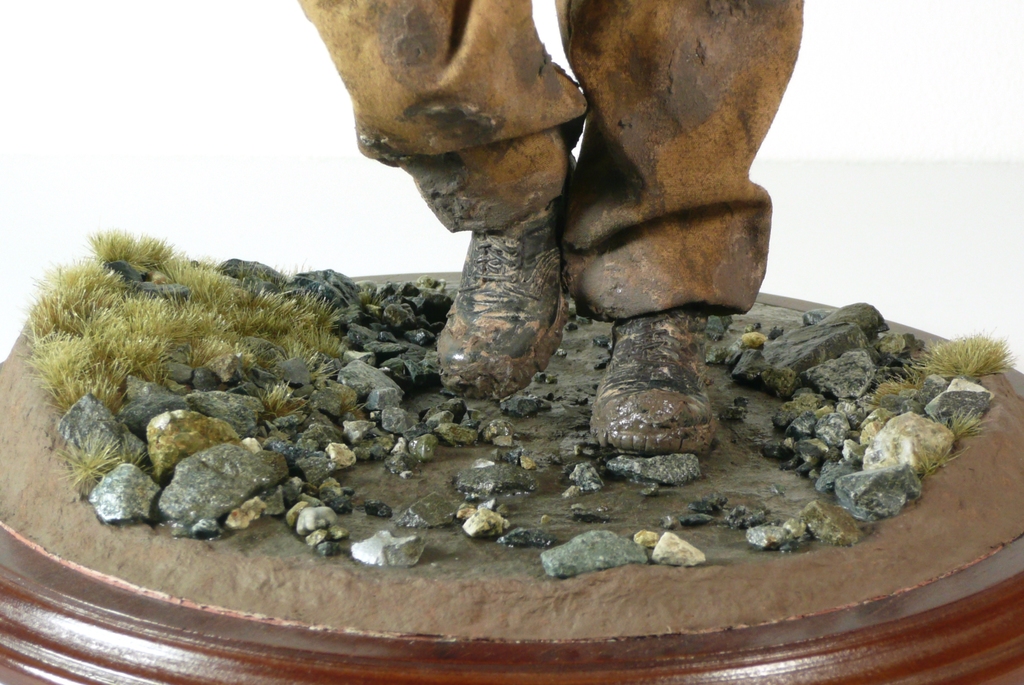 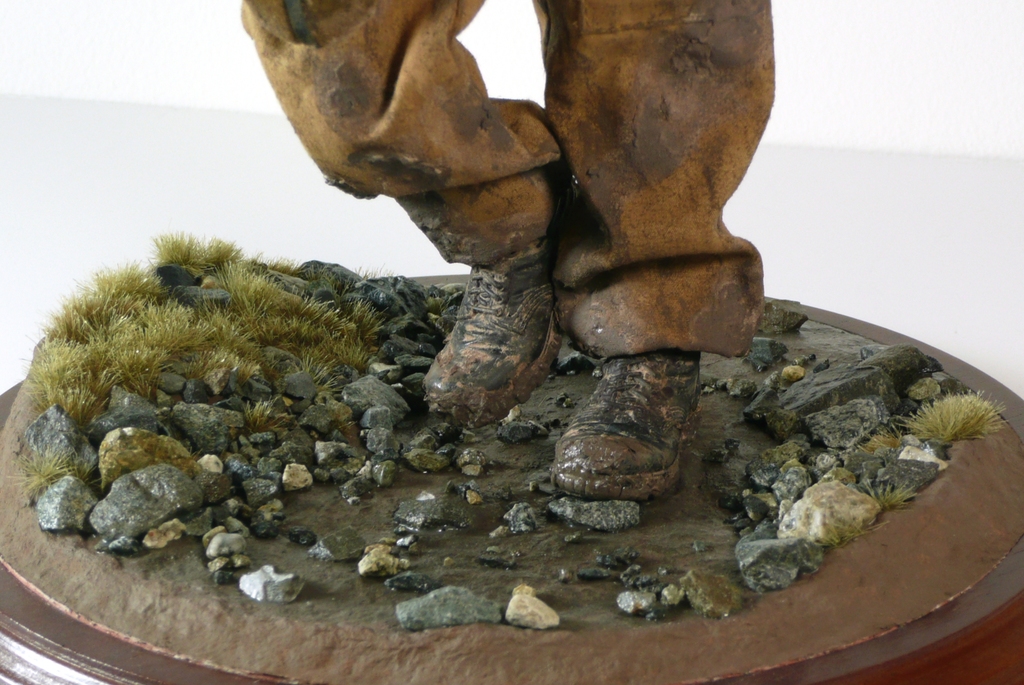 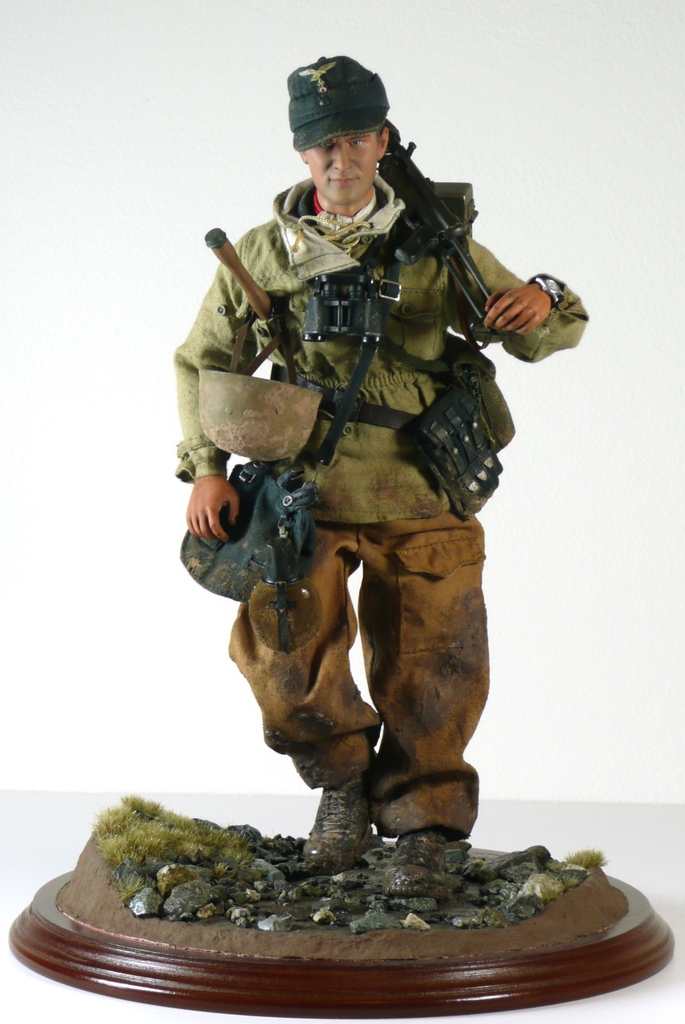 Getting the pose just right was not easy, as I wanted it to be as exact as possible. I think I came pretty close, but it's still a little off, I think. Doing a figure from a single photo is interesting because what's unseen on the hidden side is up to your imagination, but I deduced he had to be carrying those ammo boxes slung over his MP40 (you can see a corner of one peaking out over the shoulder). Headsculpt is Egon; smock is the original DML GJ type; gear is all DML except for the NLM holster and custom breadbag strap; breadbag and MP40 pouch repainted field blue; canteen customised from DML parts; scarf is 21c; cap was acquired from a board member years ago (I've forgotten who; and where the cap originally came from), repainted and insignia replaced.

The weathering and vignette base were fun to do. The mud and dirt on the clothes and gear was FastMache celluclay mixed in with Tamiya acrylics (flat earth, red brown, black, water in various ratios to get the varying shades). As you can tell from the guy's pants in the original photo, this guy got pretty dirty! I can just imagine how muddy those soldiers got during the winter/spring of 43-44 in those Italian mountains, and the trick was to build up layers of dirt, grime, and mud. The "wet" look was just super glue brushed over it when it was dry, which helps to set it and protect it. The base is from Michaels, and the ground cover is FastMache, painted with the aforementioned colors. The grass, while not perfectly to scale, is decent as an overall effect--it's from a model railroad company called Silflor (I used a product called buffalo grass and XL tufted grass). If you look closely you might be able to see some glistening "dewdrops" on the wet grass, which was just copious amounts of Tamiya acrylic clear. Rocks was just driveway gravel.


The text above was copied verbatim from the original 6thD post, making this a true "archive" post; however, the pics are from about 3 years ago and I just recently edited them for brightness and color (wasn't happy with the original pics from 2008). Those who know my work know I have kind of an obsession on getting poses to match old photographs or film stills as exactly as possible. Also, the diorama base was so much effort I never did another one again!

Hope you enjoy this trip down [my] memory lane!