Here is another review of a Hasbro Black Series 6" figure.  I have to say that currently I find these smaller figures much more exciting than 1/6 stuff.  I know this is primarily a 1/6 forum but I am more likely to be contributing in this section in future I guess.  My love for 1/6 has just gone i'm afraid mostly killed by the excessive prices which are now asked in the UK for mainly franchised figures, but also the military stuff too really.

Anyway I digress and on to the review.

This time it is General Grievous.  I will admit to having a bit of a soft spot for the character.  Its not the best character ever devised, but hey this is Star Wars and I kind of like the look of this one.

This is the first in the 'Deluxe' range of Black Series figures, and as such is numbered D1 on the packaging.  Apart from the D numbering the package is standard Black Series stuff, so I won't spend more time there. 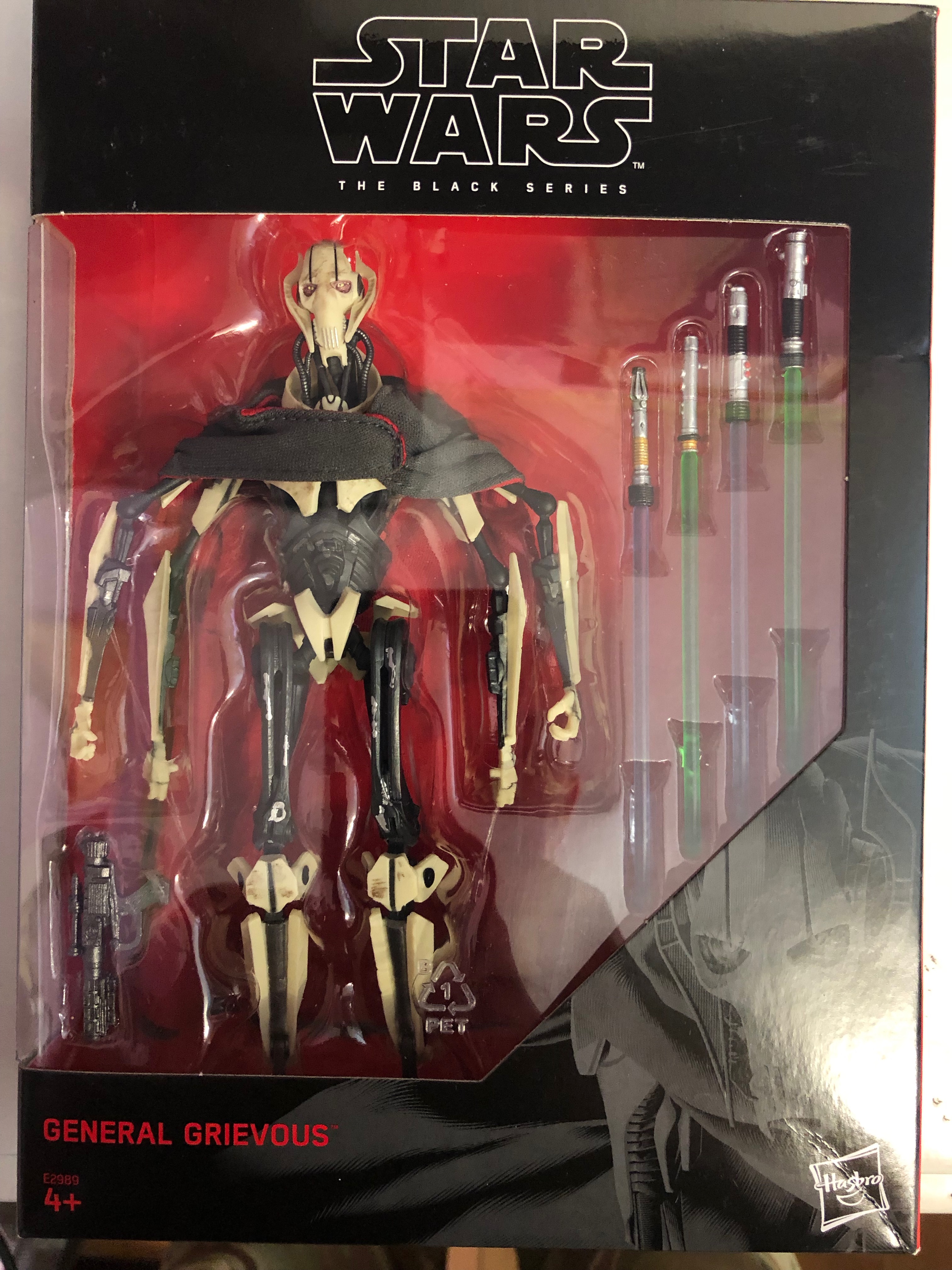 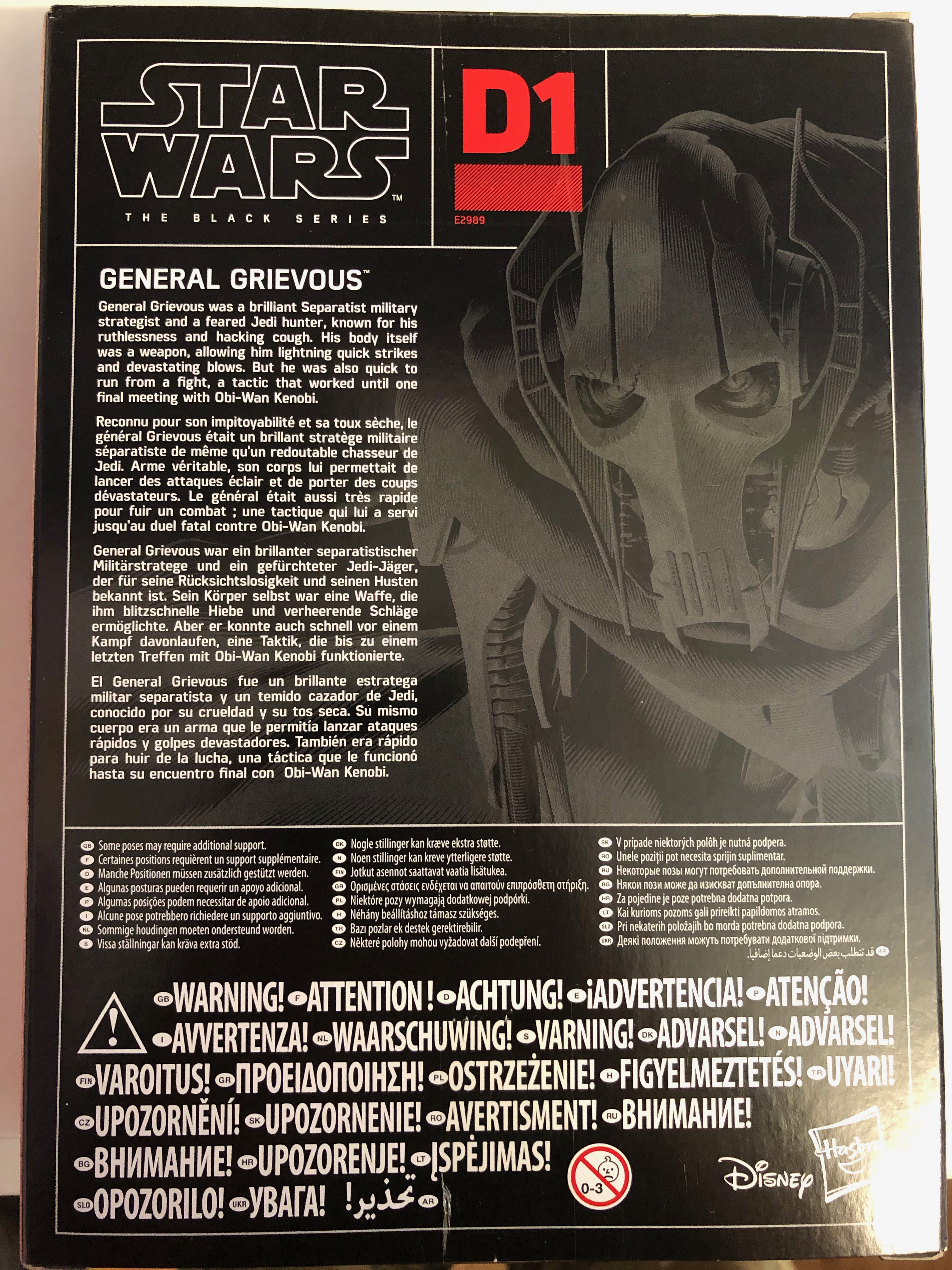 This is a tall figure measuring approximately 18cm (7") tall at full height. 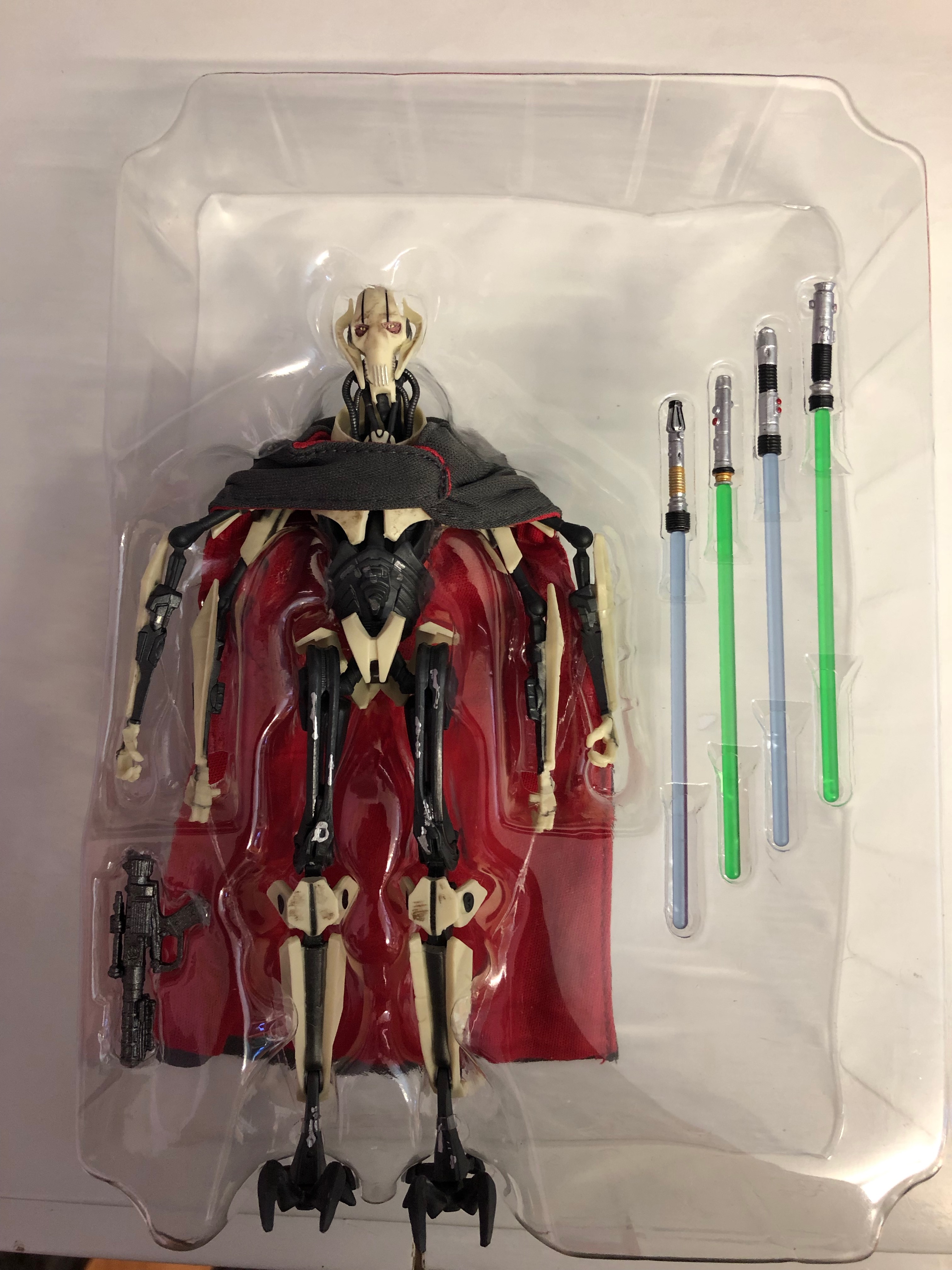 It comes with  nice lined cloth cape which seems to drape well enough, and has 4 pockets on the inside for the included light sabre hilts.  There are four different light sabres which are all different in design and have the standard Black series removable blades 2 each of blue and green.  There is also a droid blaster which is a nice touch. 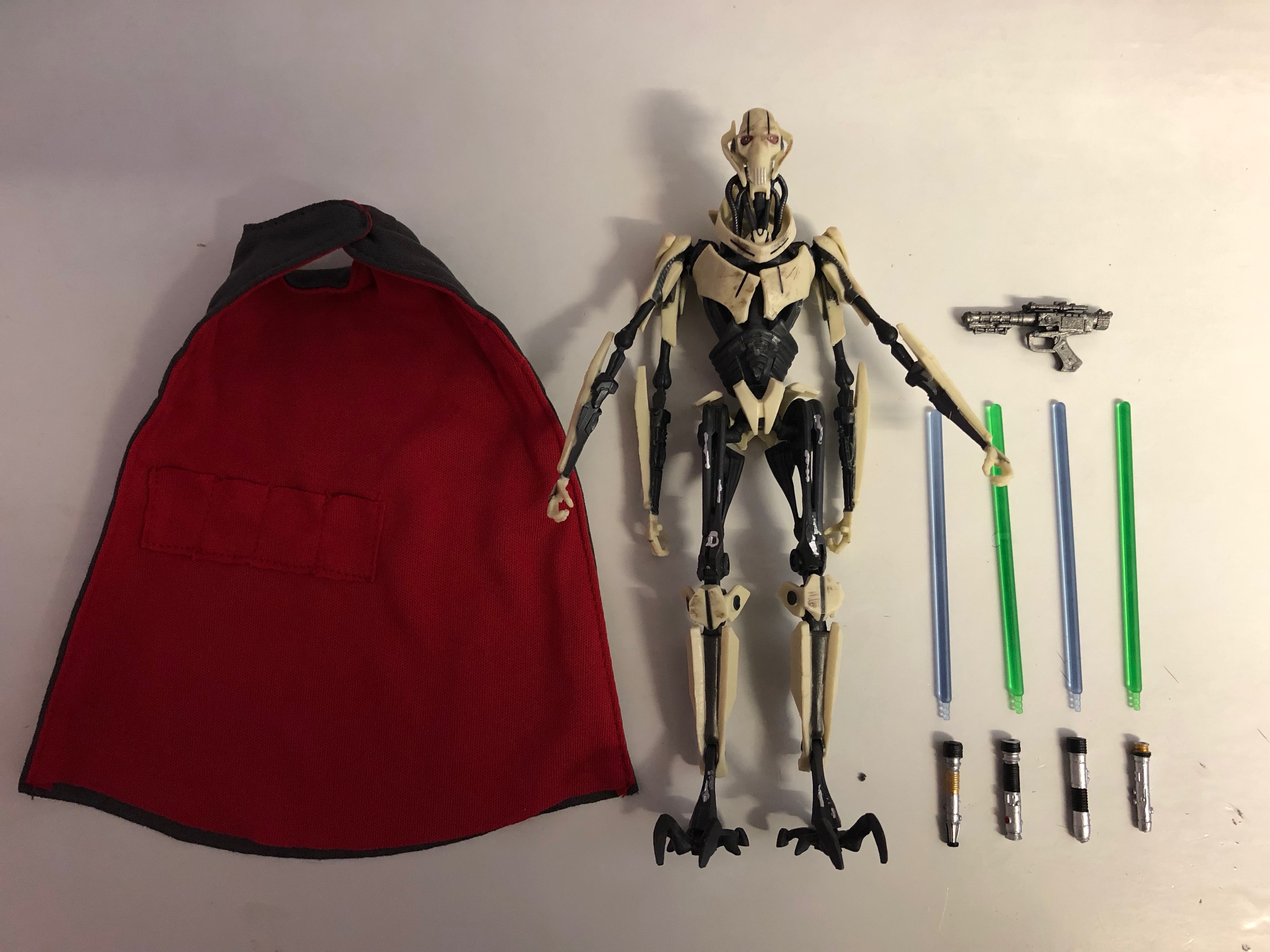 This is an impressive figure in person.  Its tall, with those great looking claw like feet, and has arms which can be split providing either four or two arms to suit how you want to pose the figure.  Arms are nicely done and do actually clip into one another to form the two arm mode so they do really look like single arms in this mode.  The Shoulders have a great range of movement, but due to the design the elbows are a little limited and there is no wrist movement at all.  This could have been improved but then the figure would probably be likely to cost over £30 rather than the very reasonable £25-£27 it costs here in the UK.  Its important to remember too that these are toys, and not necessarily high end posable collectables, and therefore need some strength and durability to the joints.  In any case it is still relatively easy to obtain those classic looking 4 arm Grievous poses with the limited mobility.
Each of the hands has 2 fingers and a thumb enabling each hand to hold an item, however when joined together the hands are too big to hold the included blaster.
The rest of the articulation is very good, with good movement all round and the ability to add some subtle character to a pose by cocking the head slightly etc...  I would say that the articulation is good overall given the nature of the character. 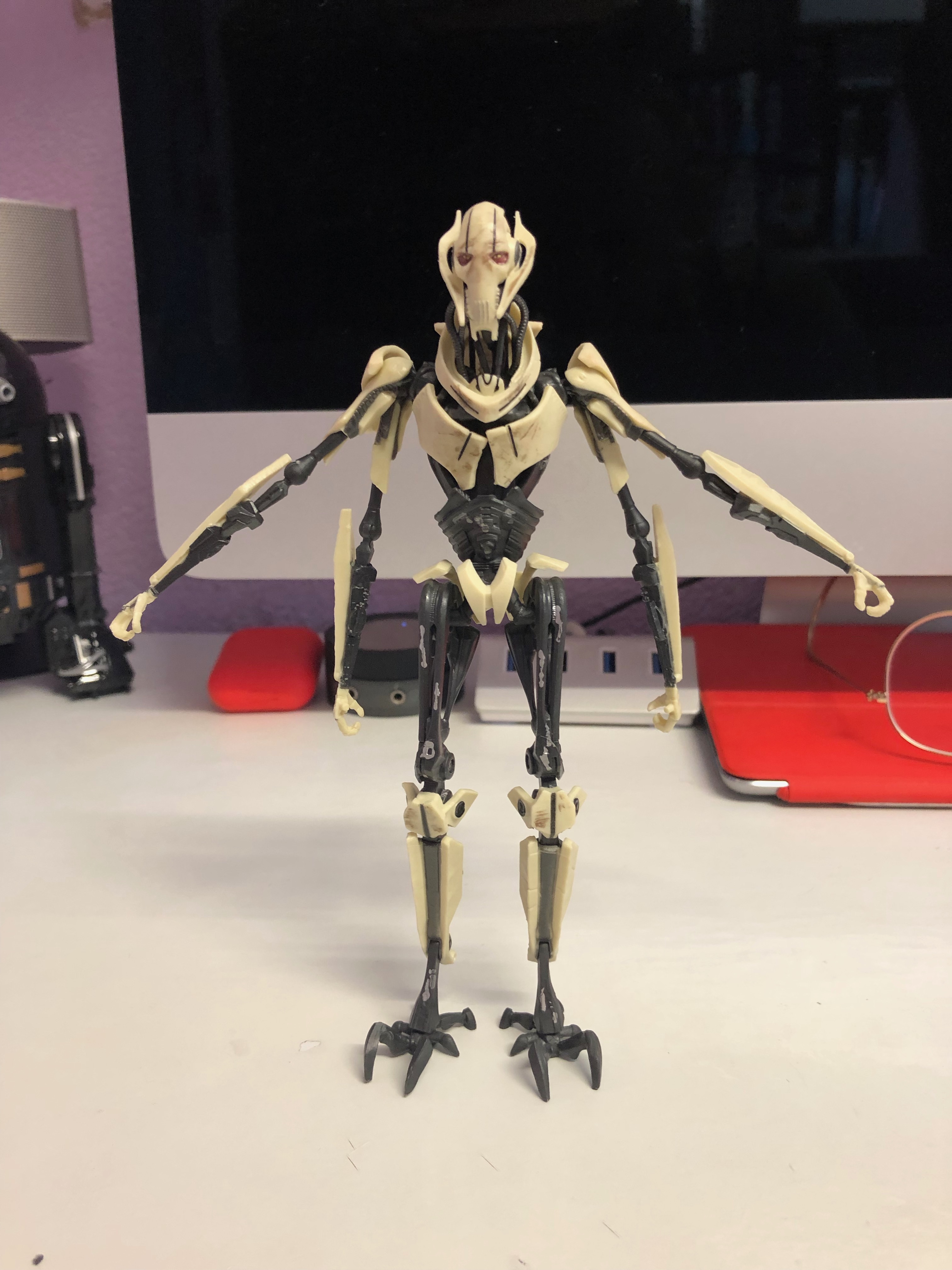 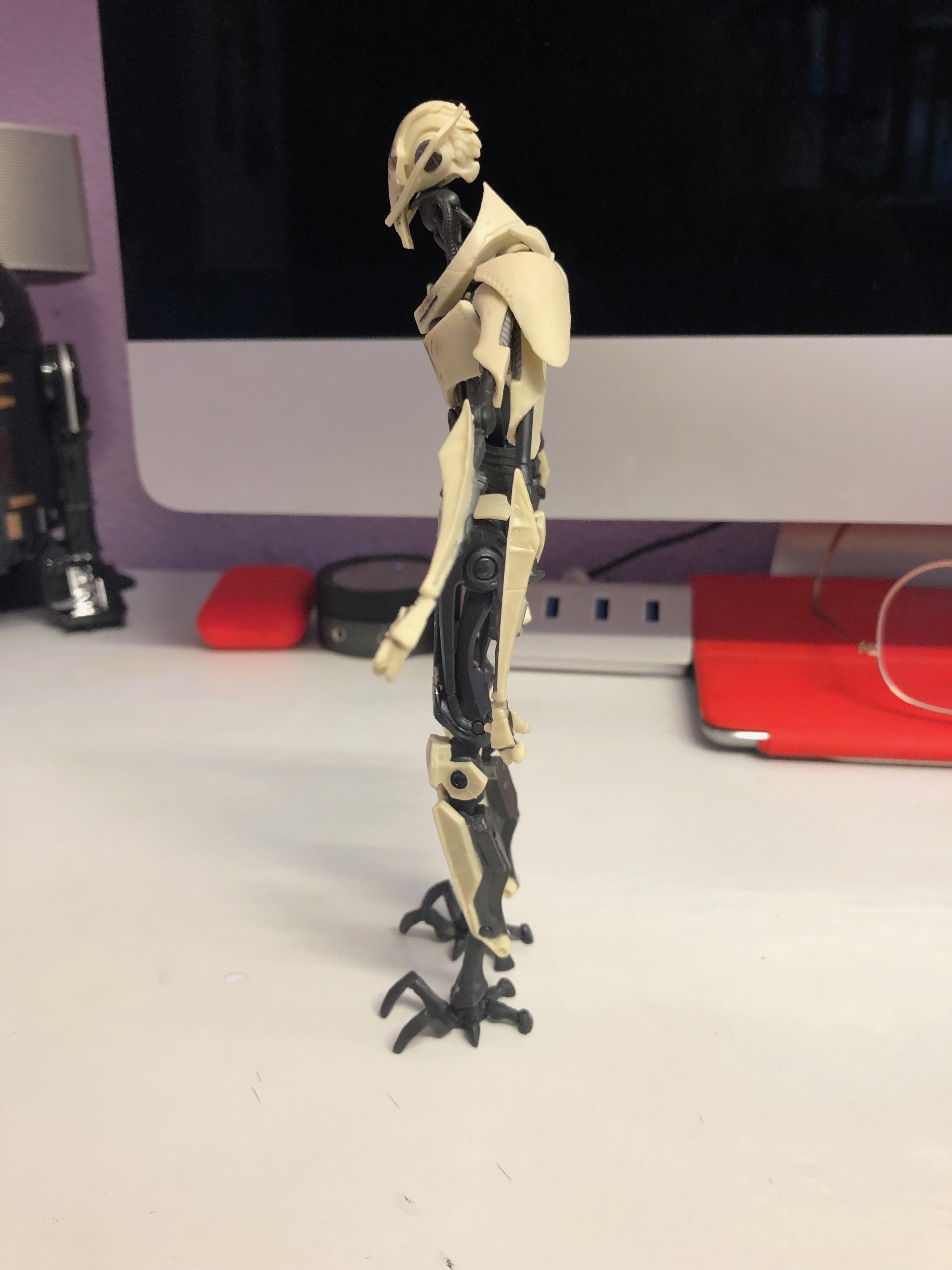 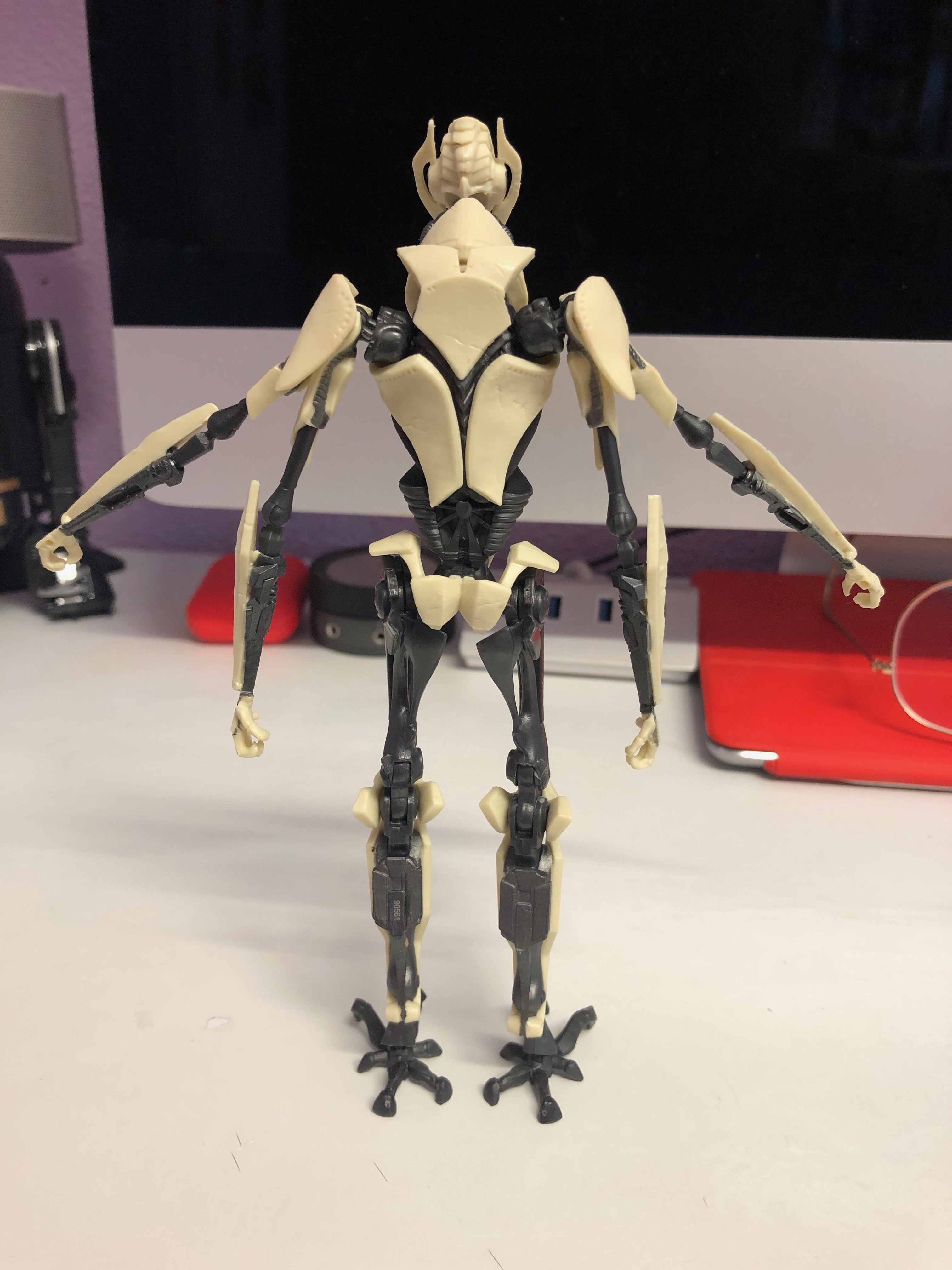 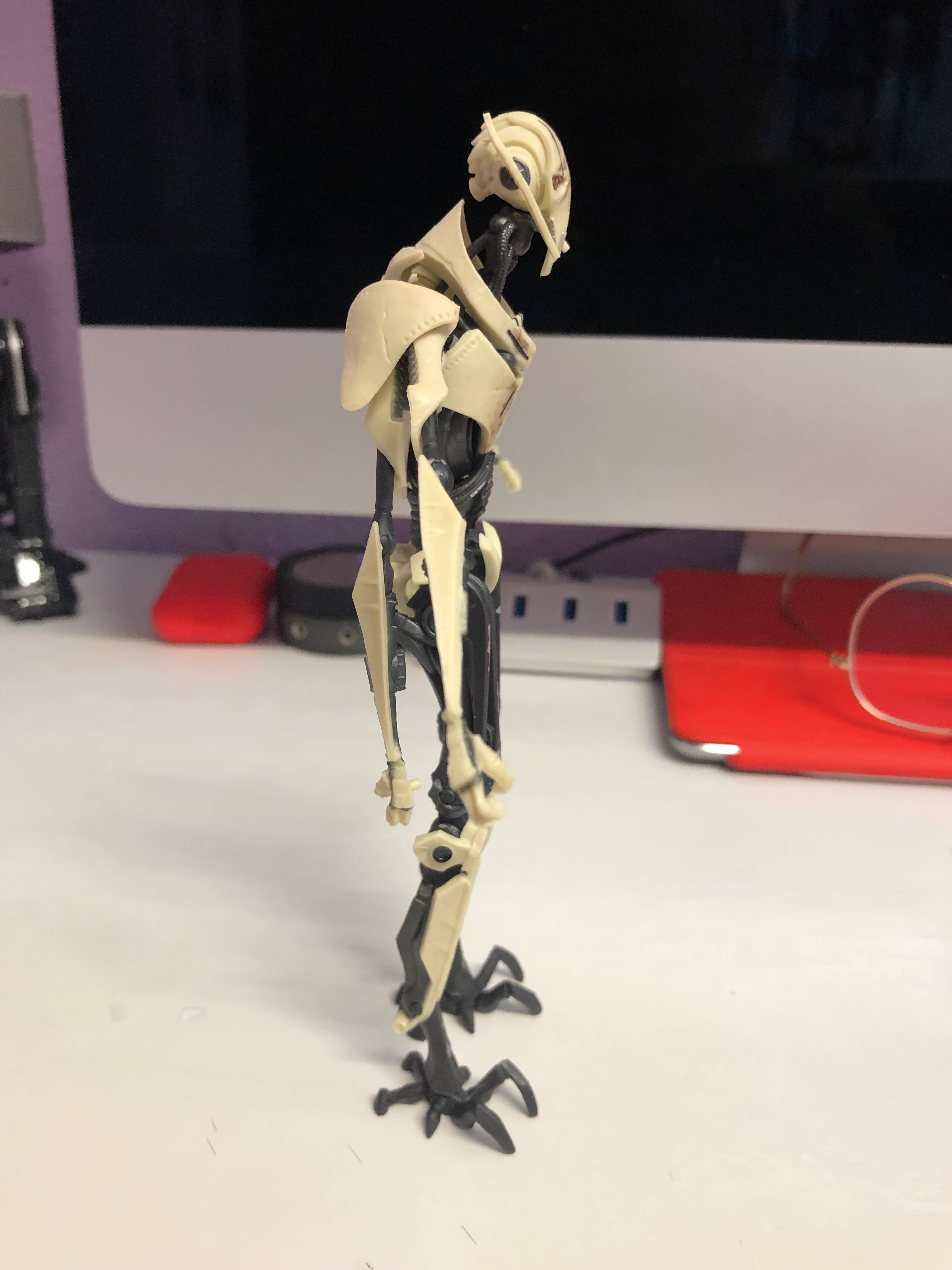 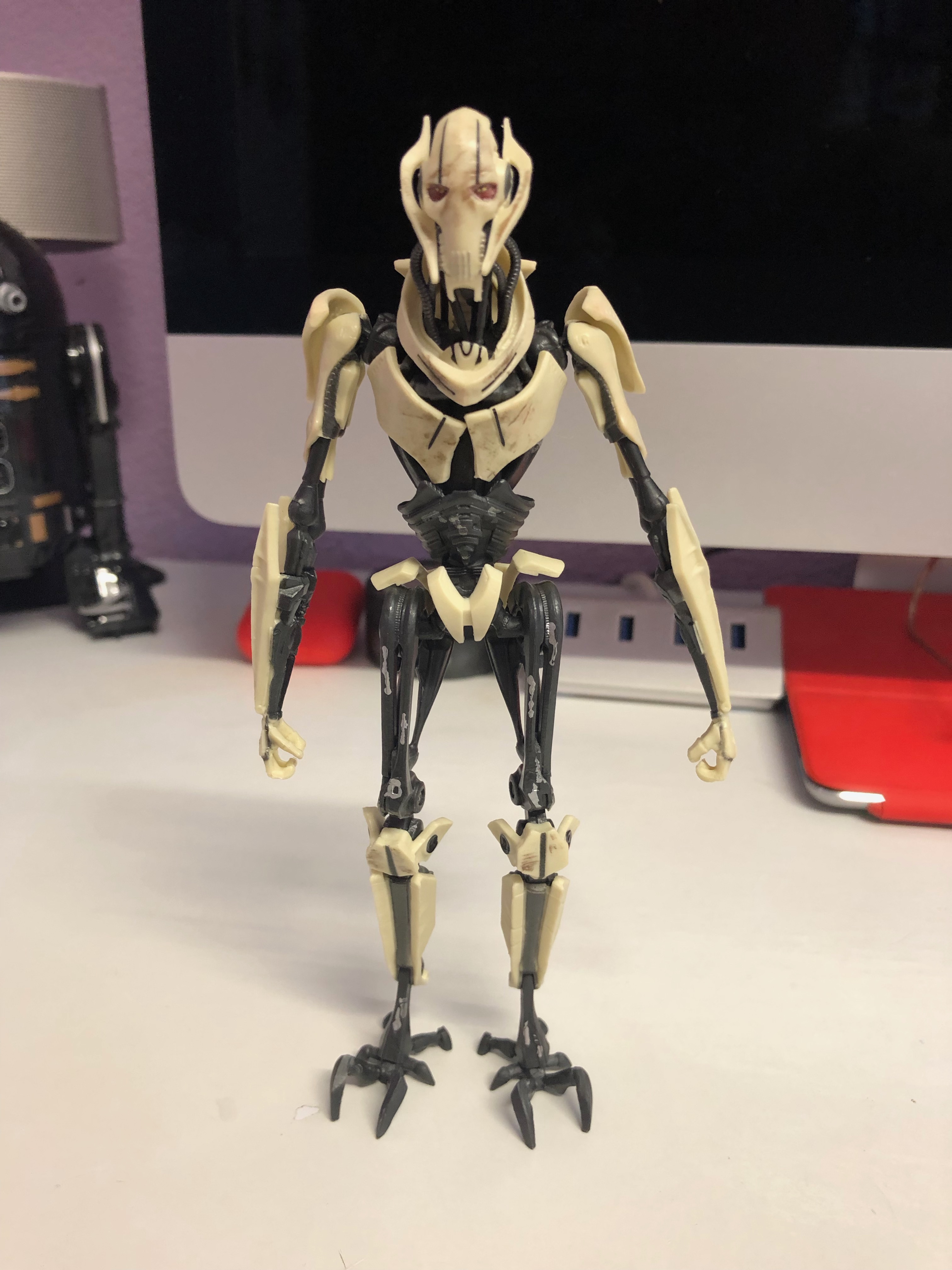 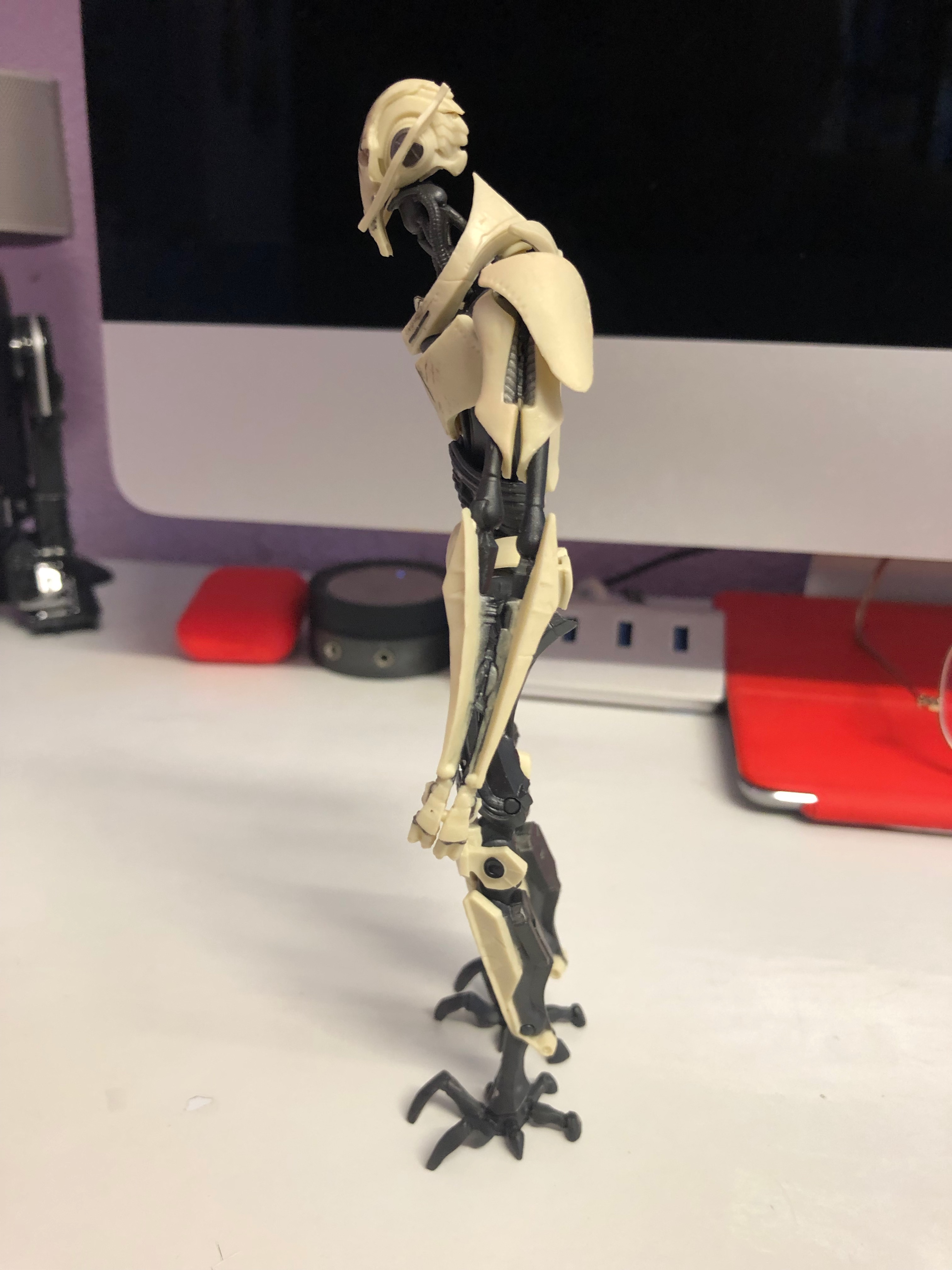 The figure is fairly easy to pose and can achieve all those classic Grievous looks.  It balances well in most poses, and the feet whilst having multiple small points of contact are actually able to provide a very stable base in most poses. 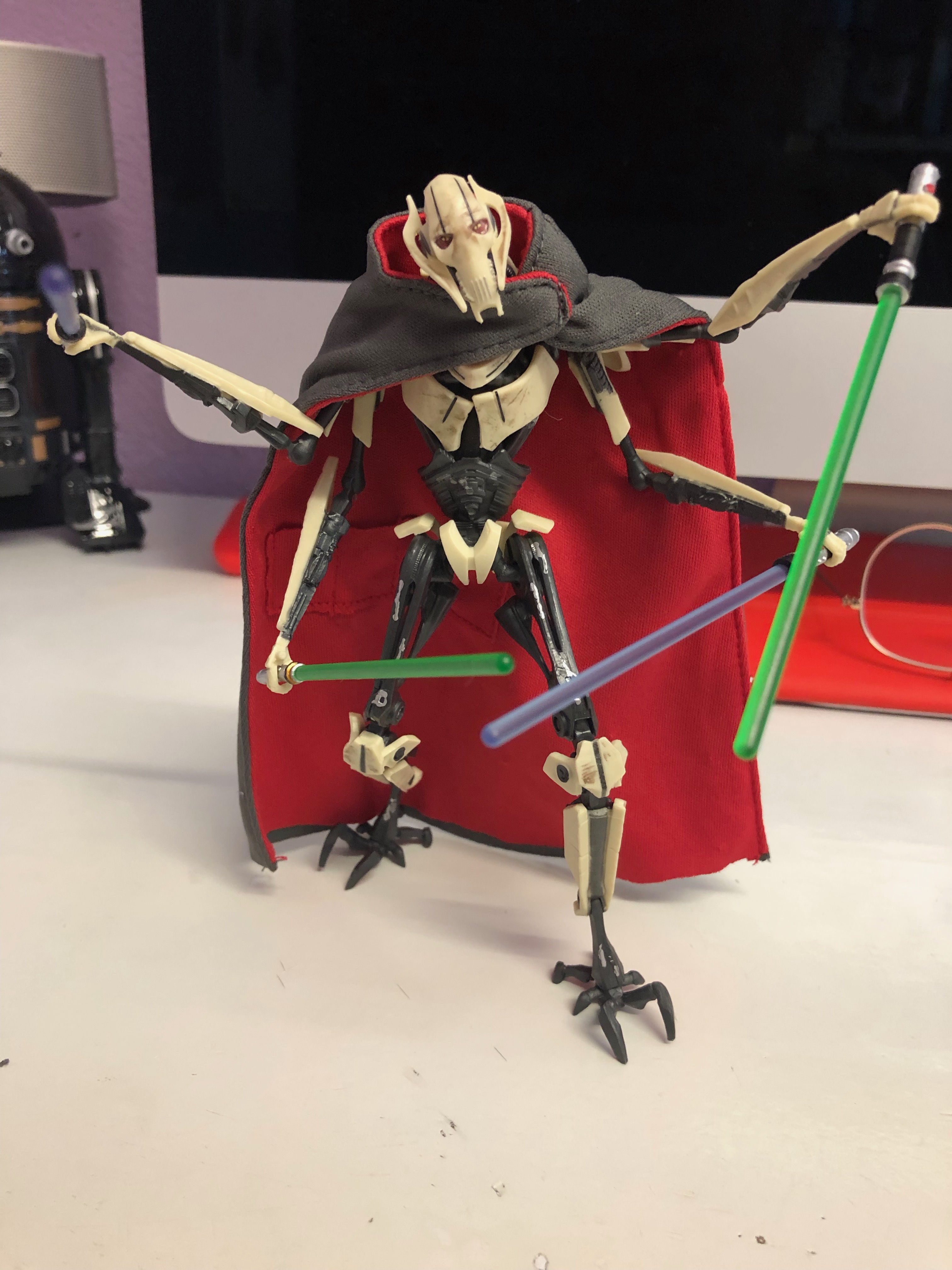 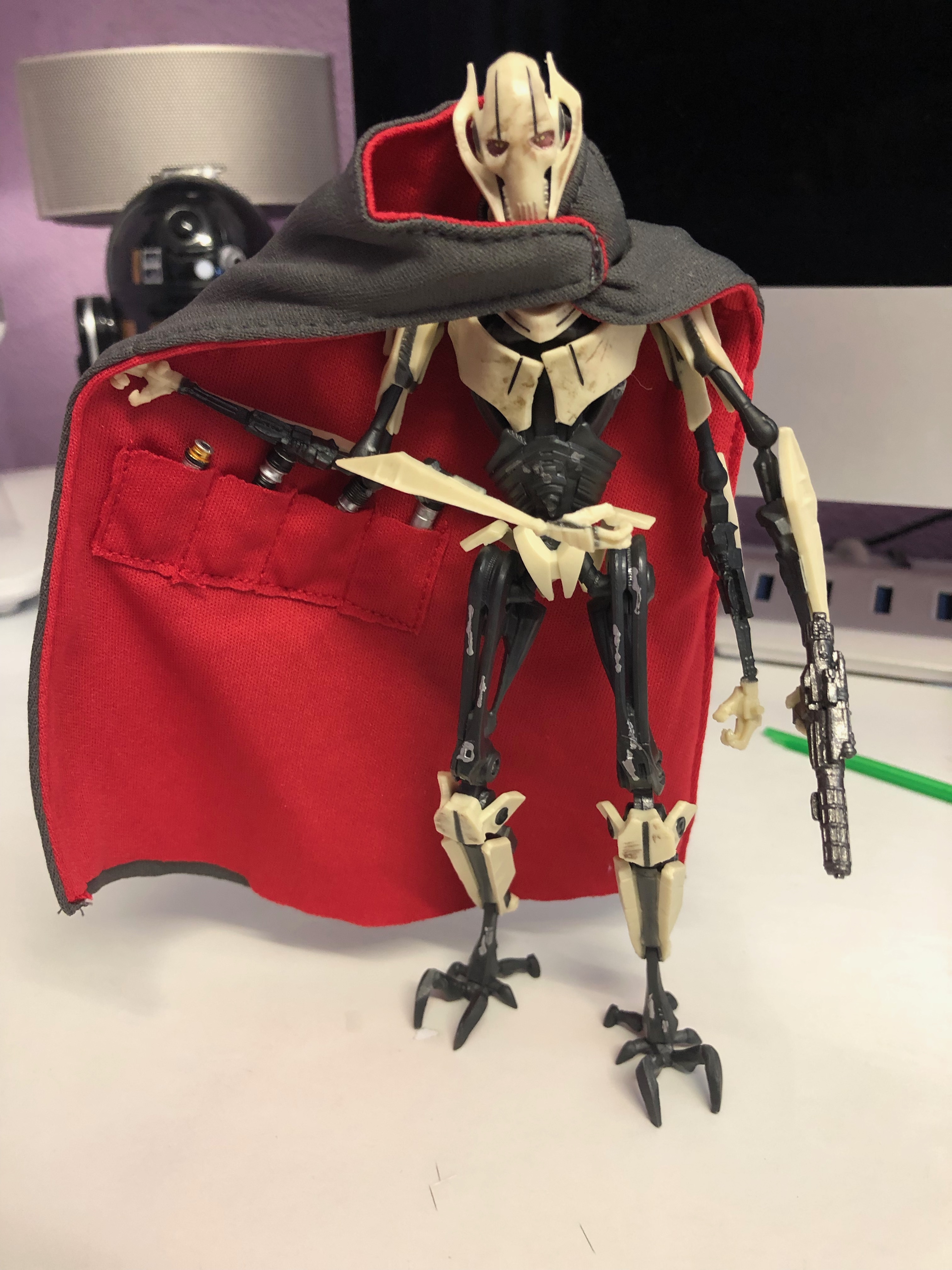 The look of the figure is great, with very nicely detailed sculpting and for the most part great paint.  There are some of those slightly over the top silver patches, but for the most part the weathering on this figure is great.  Very subtle and not over done.  The eyes are very well done indeed on this one, looking very reminiscent of what we see on screen.
This side of a figure is more important for me these days, as I am much more a collector now than a modeller or tinkerer.  I have been there and done that in the past but it is much less a part of the pleasure I get from figures today.  My figures for the most part don't get altered and so how they look out of the box is important to me, and this one in my opinion delivers.

I love the look of this figure and can whole heartedly recommend it if it takes your fancy.

Here he is in place on the shelf. 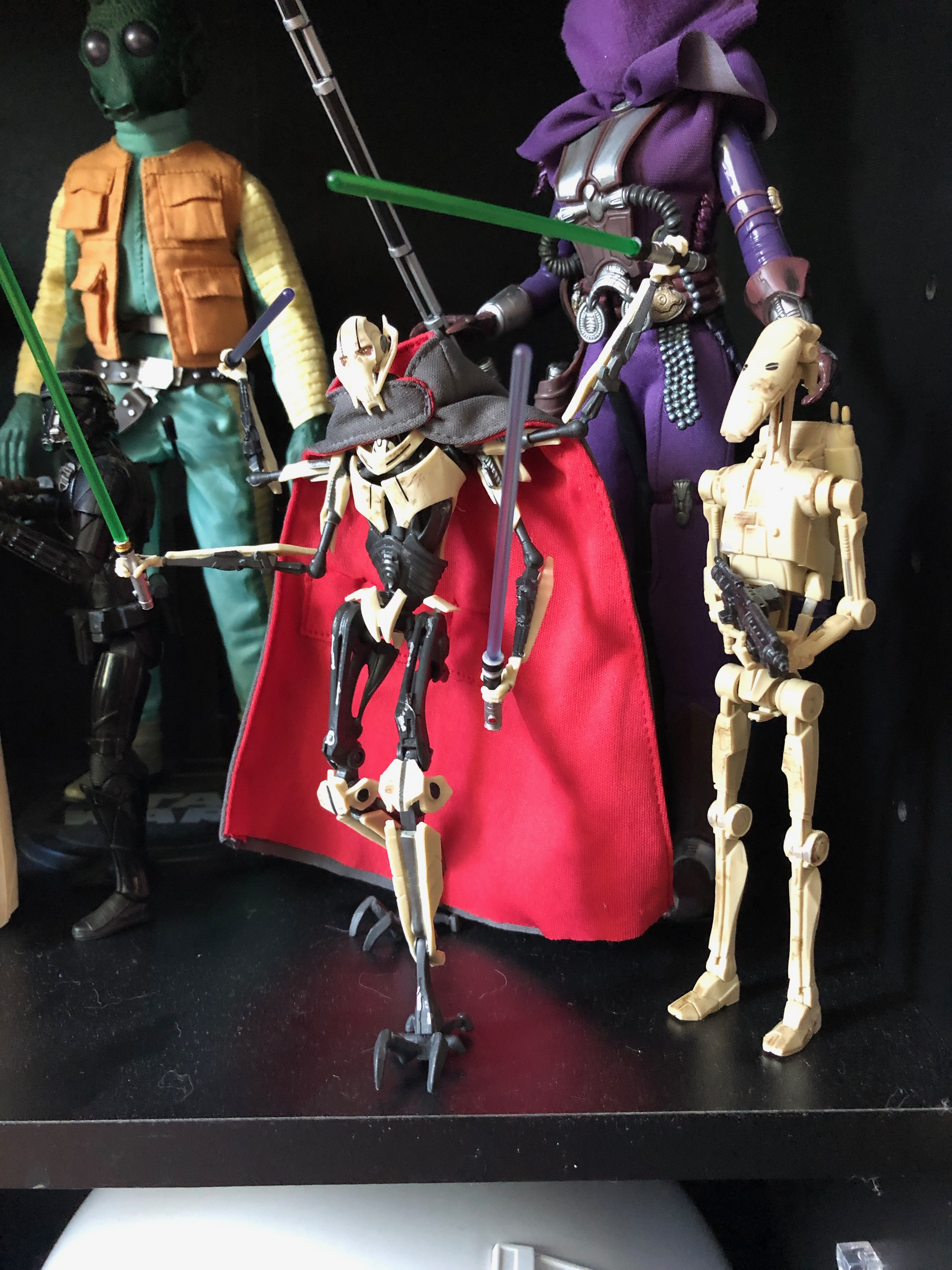