Part I
For Part II (updated and modified figure), please see Post 18 below.

I'm very late to the sandtrooper party. For one thing, I prefer my stormtroopers clean and ship shape for the parade ground (who was it that said wars just mess up armies?). For another, I've always had a suspicion that sandtroopers were a combination of accident and post-fact rationalization: they were the first stormtroopers used and filmed for Star Wars (Episode IV/A New Hope), and the minor differences in their armor (not just equipment) may have been the result of changing design rather than pre-thought-out purpose (to wit, spacetroopers in the same film don't differ from regular troopers except when it comes to their equipment to breathe in space).

It didn't help that Marmit, Medicom, and Sideshow messed up the helmet in different ways (Marmit and Sideshow got the facial proportions wrong, Medicom used a regular stormtrooper's helmet of the hero variety). And all this was (mostly) before I was collecting high-end sixth-scale figures anyway. When Hot Toys released their sandtrooper, I was very tempted (apart from the most convincing weathering, they had finally gotten the helmet pretty much right -- improving on their standard ANH stormtrooper design which had perpetuated the same error as Marmit and Sideshow). But I was put off by their choice to depict what was definitely a costuming error, the upward arched brow band of one sandtrooper ("these are not the droids we are looking for"). Since then, I have come across photos of the various sandtroopers in all their glory, and have also come to realize that at least the finished HT product's helmet looked acceptable for my delicate sensibilities after all. Of course, by then these collectibles, which had been pricey (for their time) to begin with, were becoming rarer and grossly overpriced. So I kept putting it off or talking myself out of it.

But one by one I picked up pieces from broken down sets (still eschewing the HT helmet until it was too late) until I was gradually able to put together a makeshift complete sandtrooper with the purchase of the last few rare and overpriced pieces. You can see it below, both by itself and also compared with the Rogue One version of essentially the same thing (though less elaborately equipped), the "heavily weathered Jeddha Patrol."  My ANH sandtrooper kitbash/custom consists mostly of different parts from Hot Toys (sandtrooper lower body armor, stormtrooper long blaster rifle, Jeddha patrol upper body armor and helmet) and Marmit (undersuit, pouches, pauldron); I did some custom fitting, greeblies, and repainting. 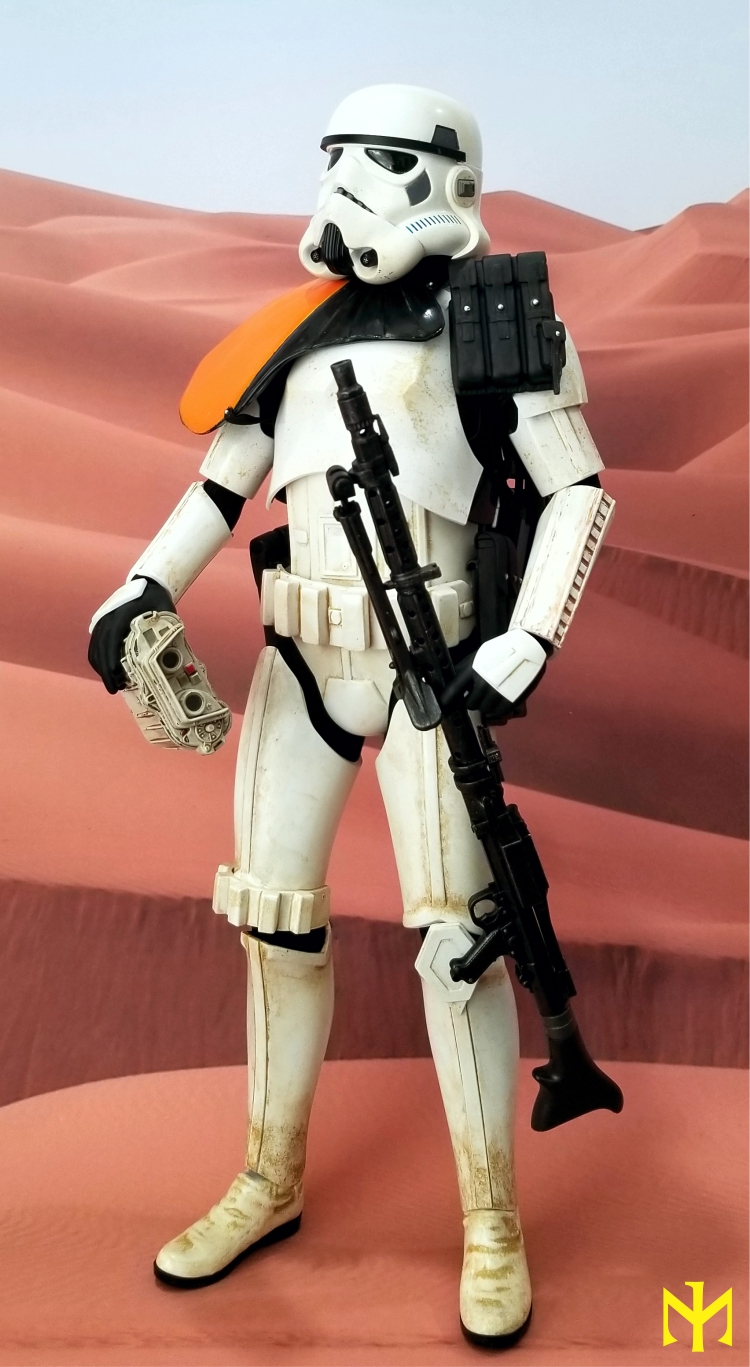 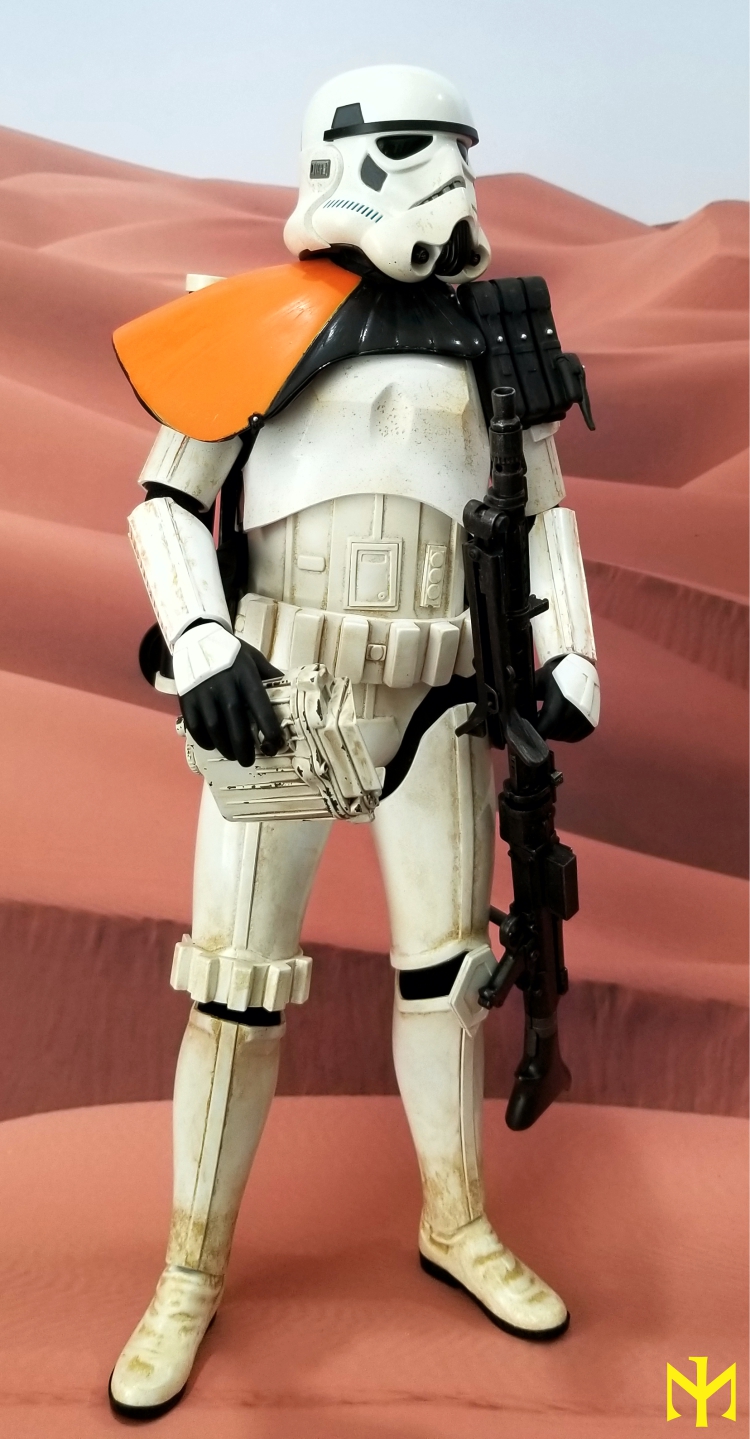 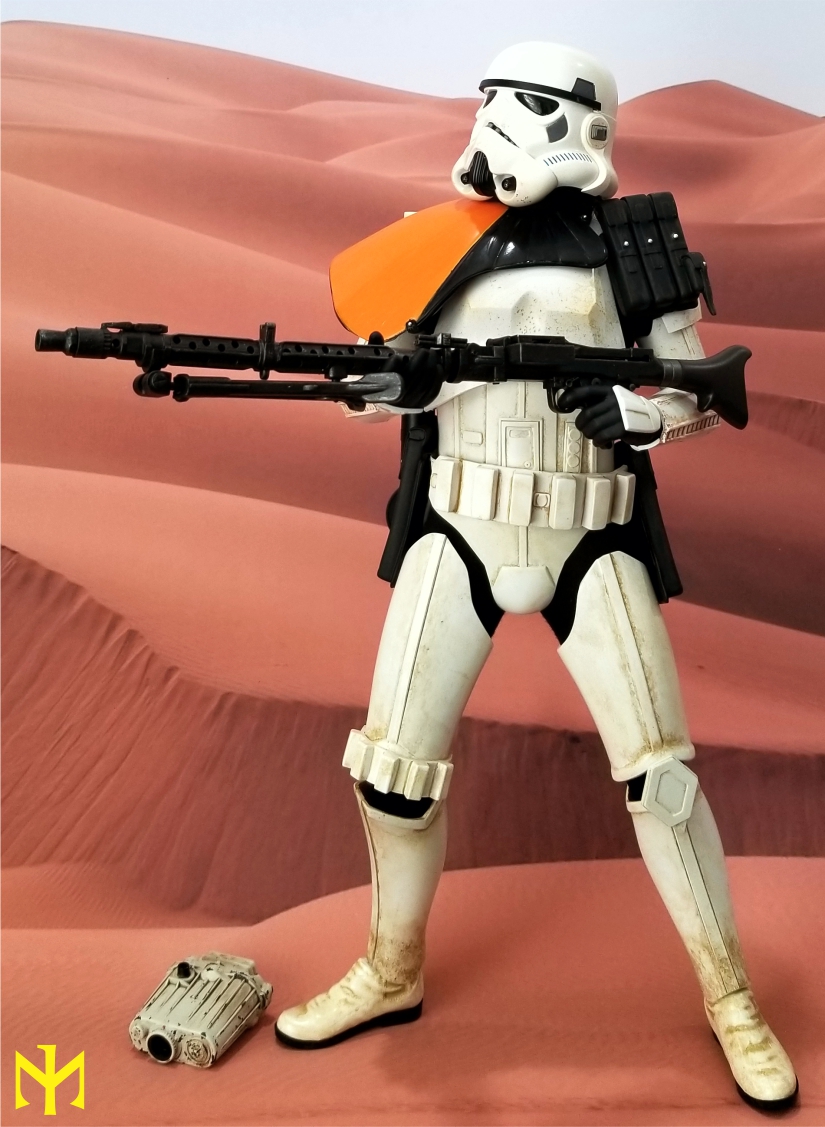 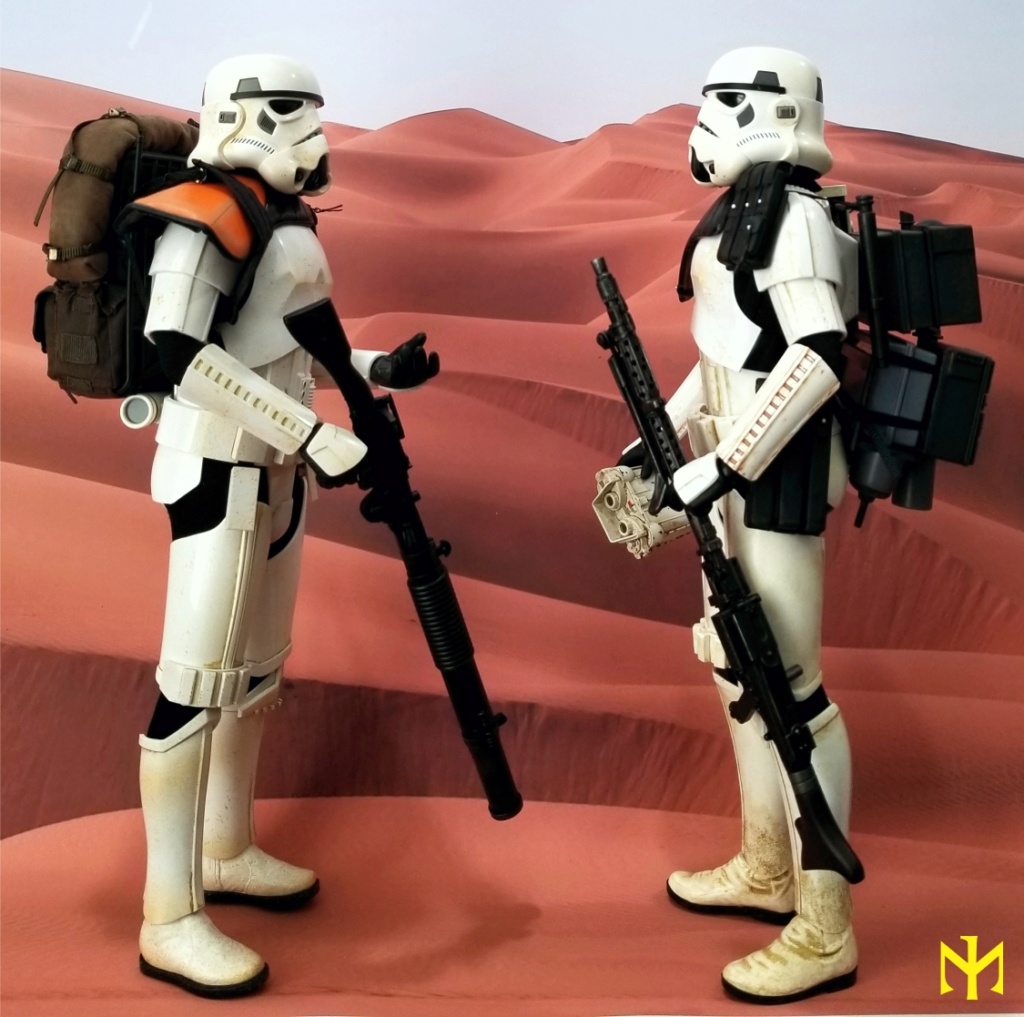 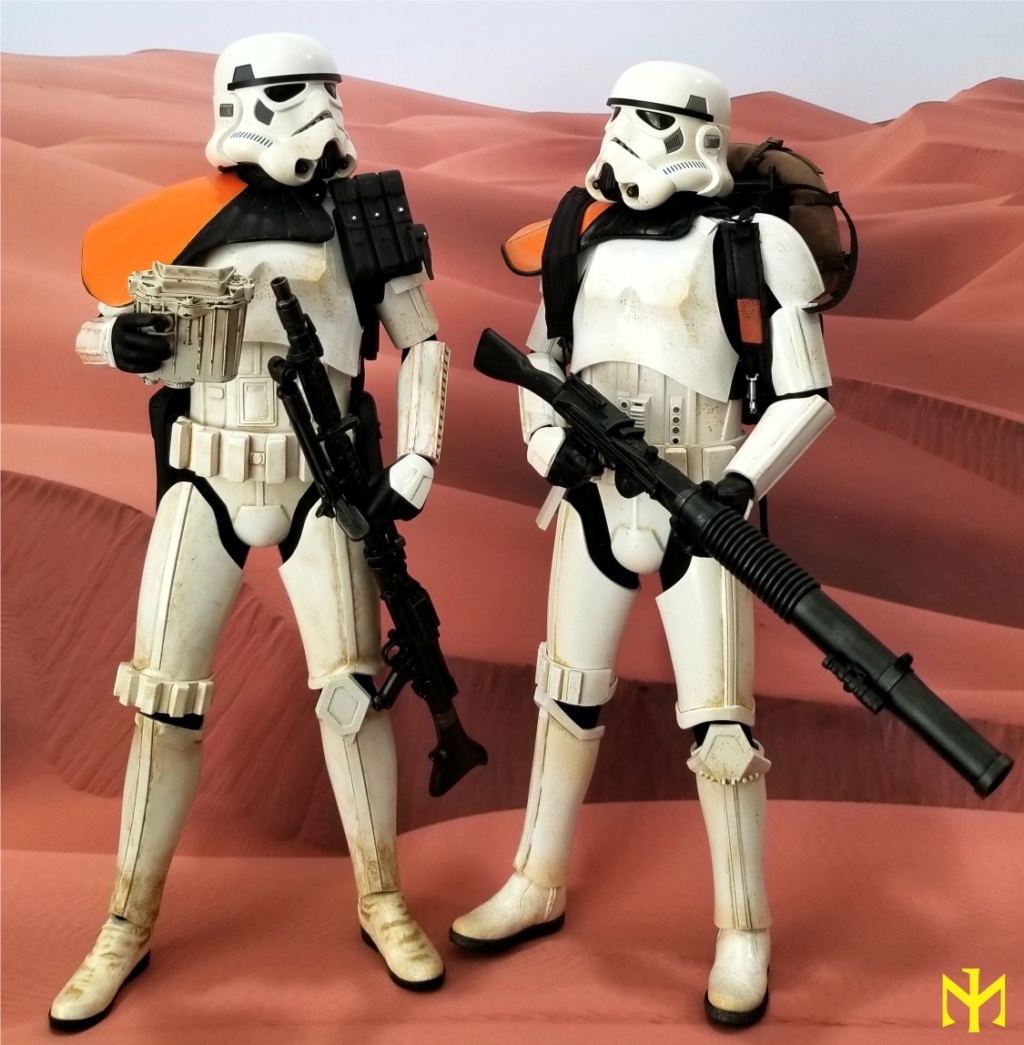 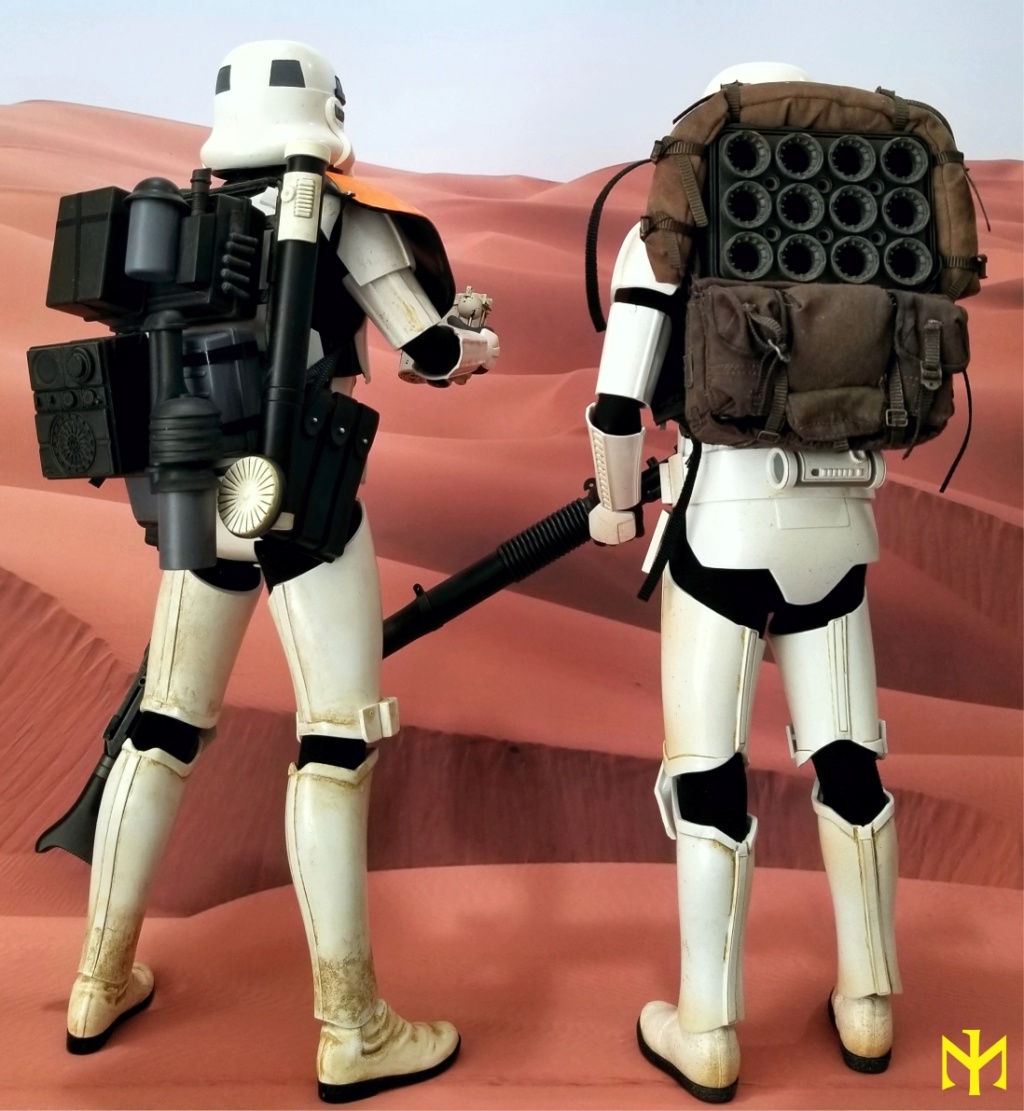 Hope you liked it.