The product is available in black and white. 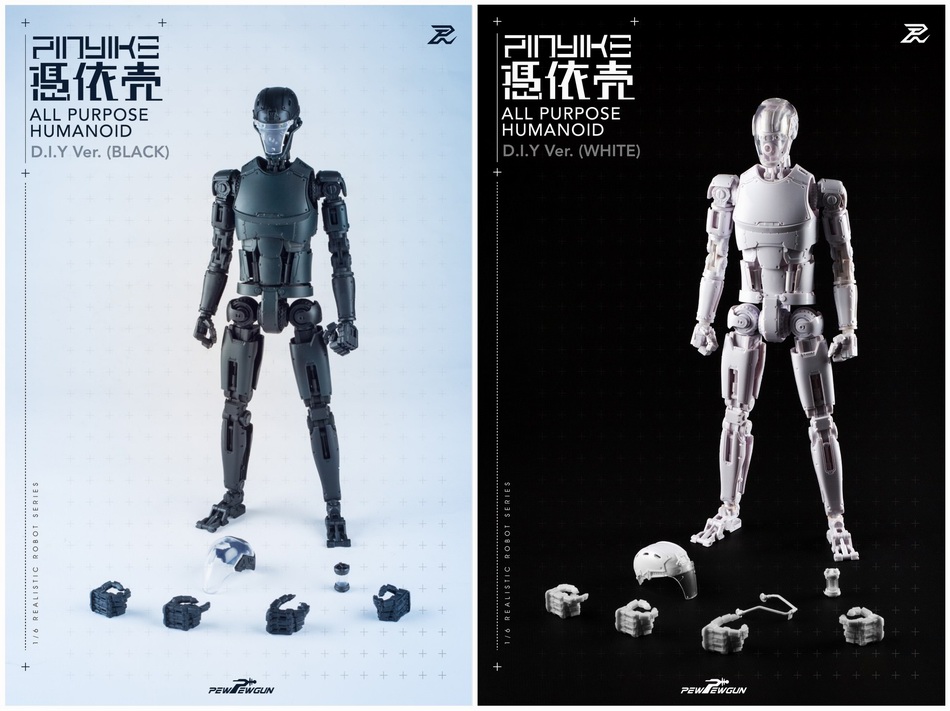 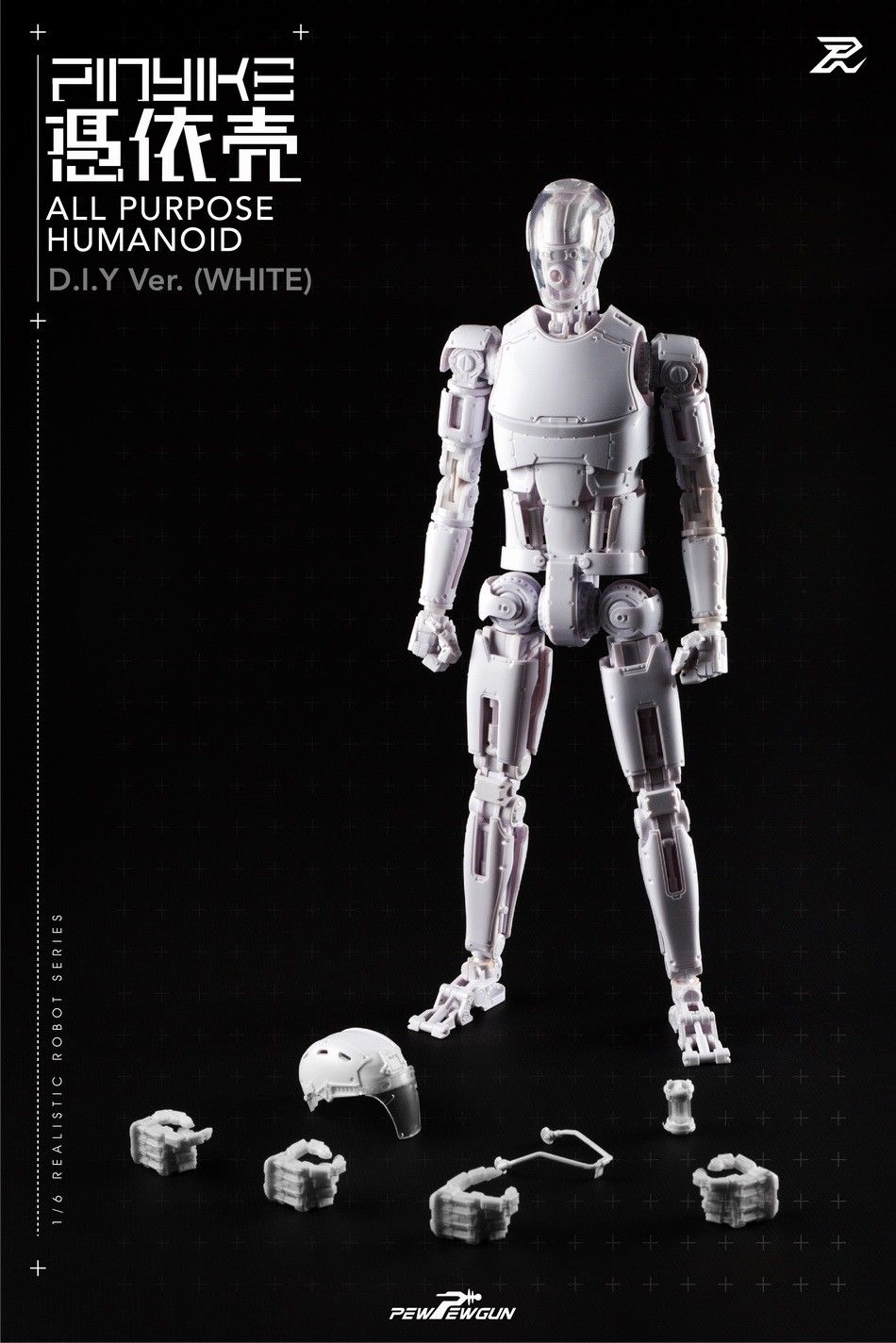 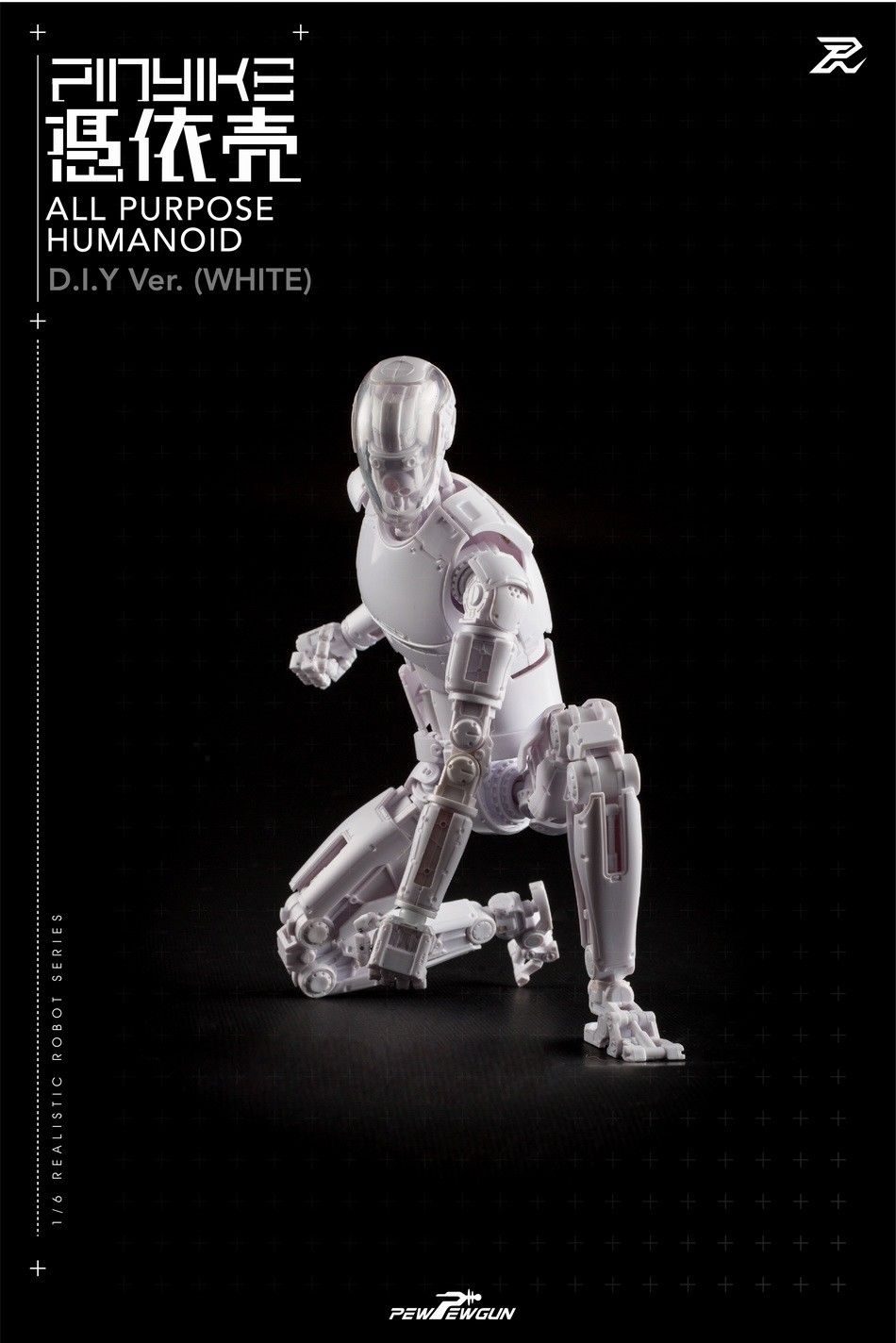 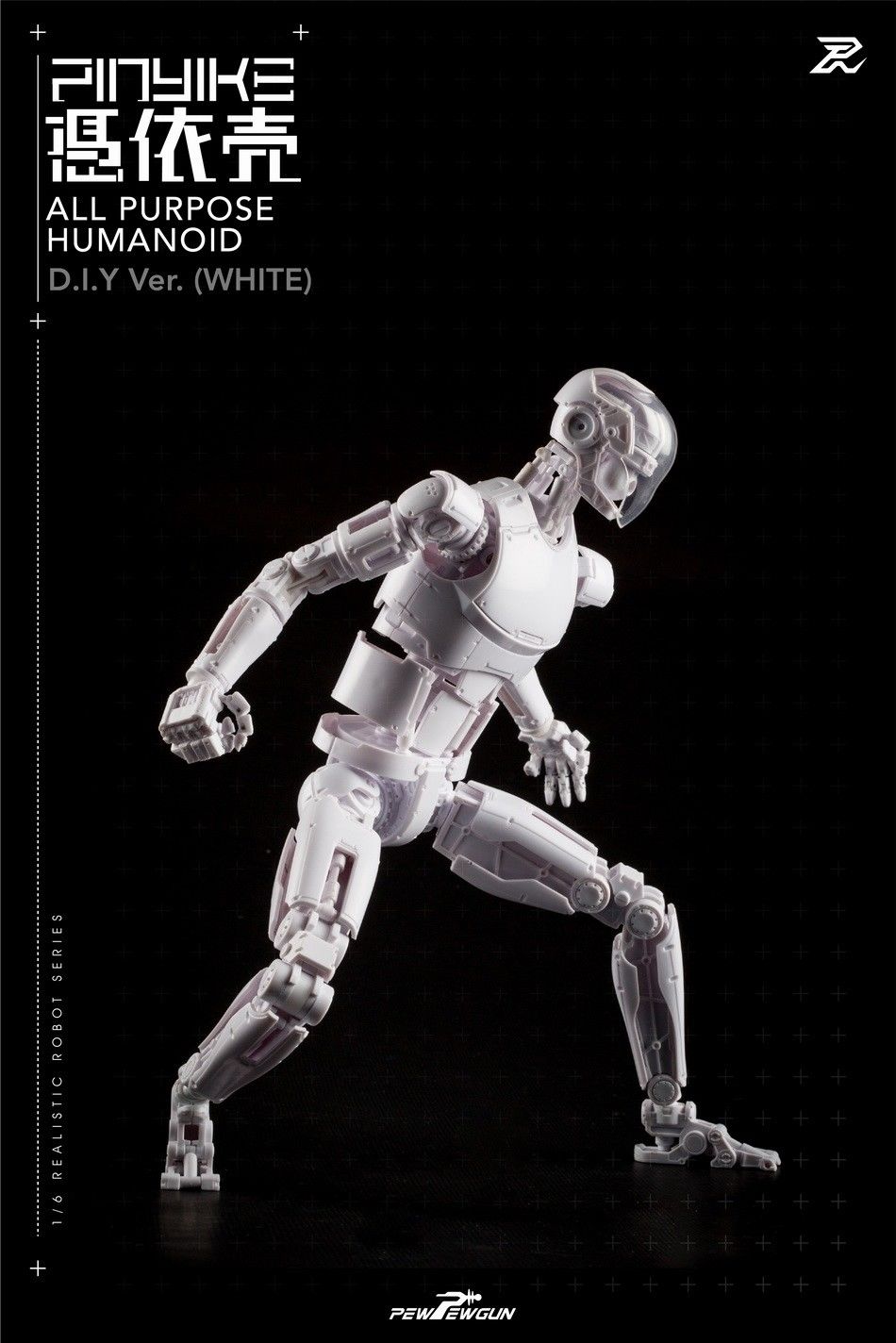 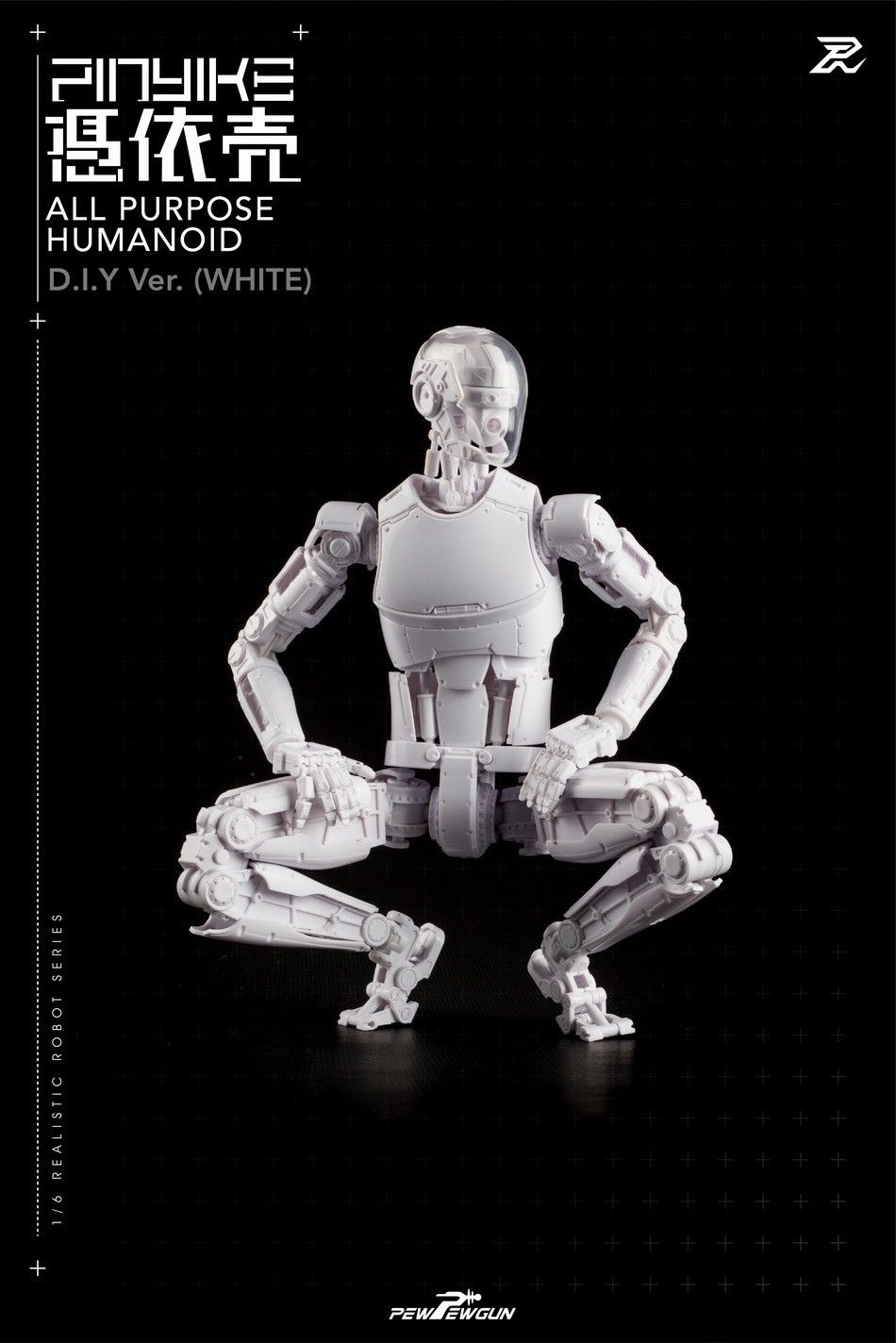 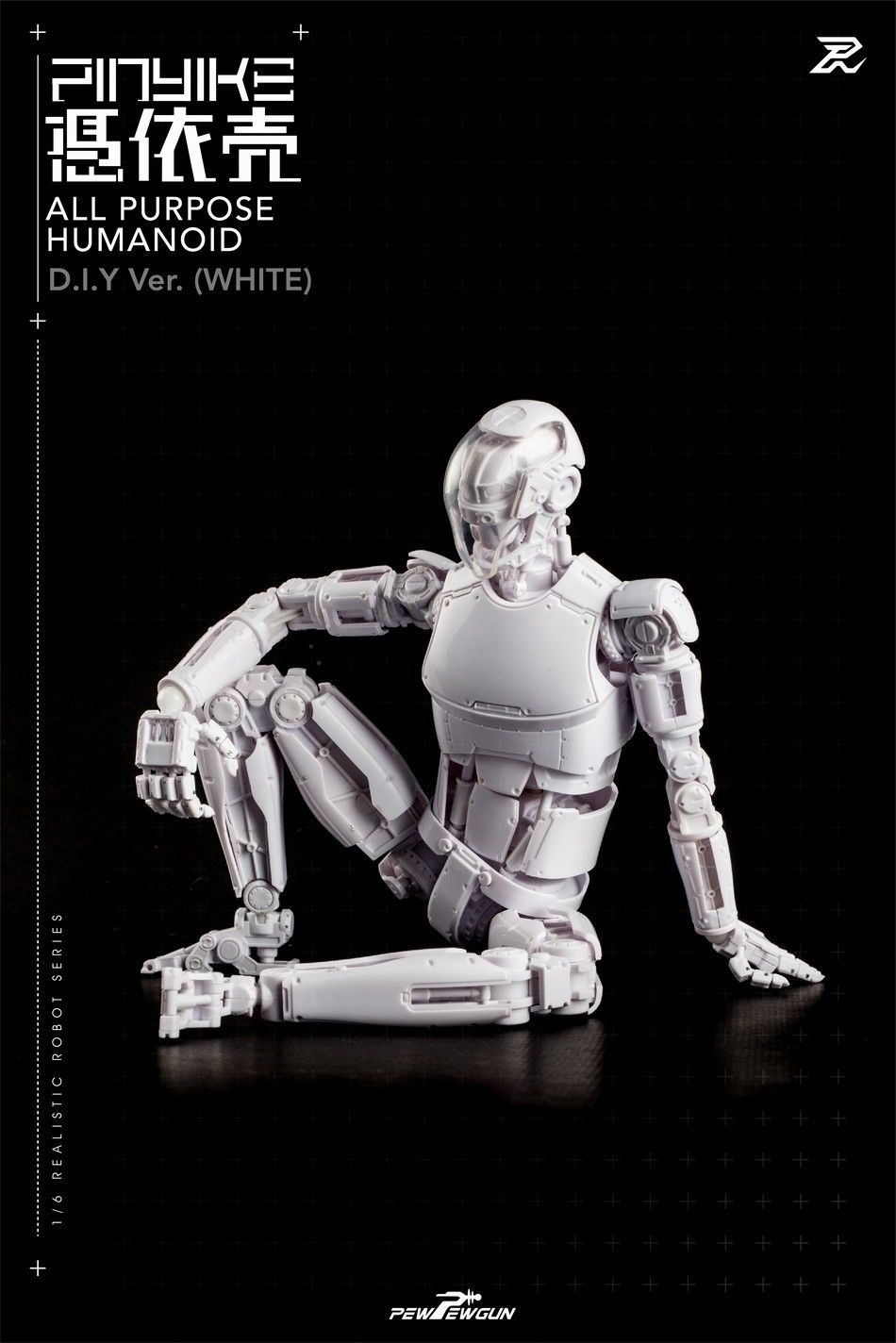 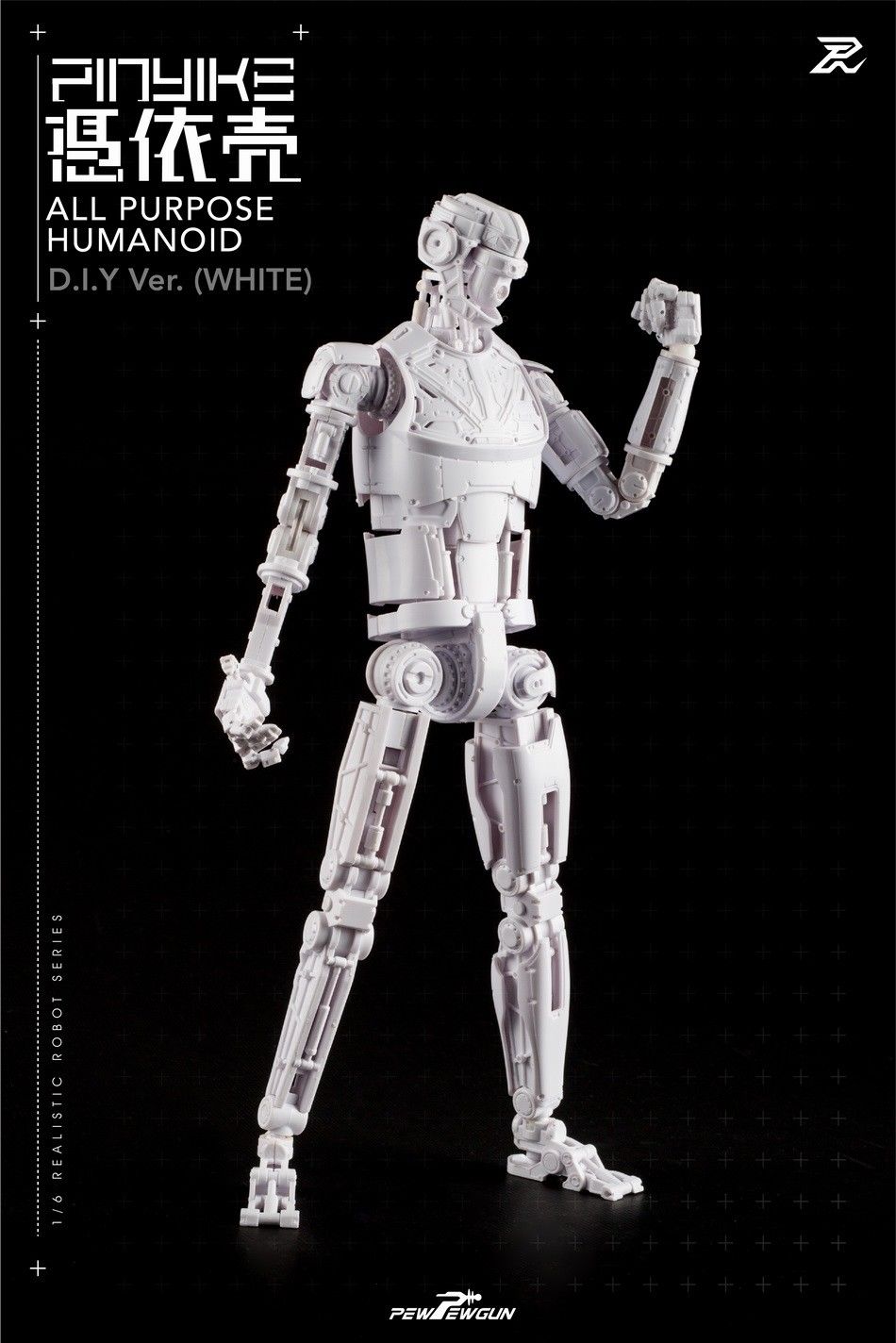 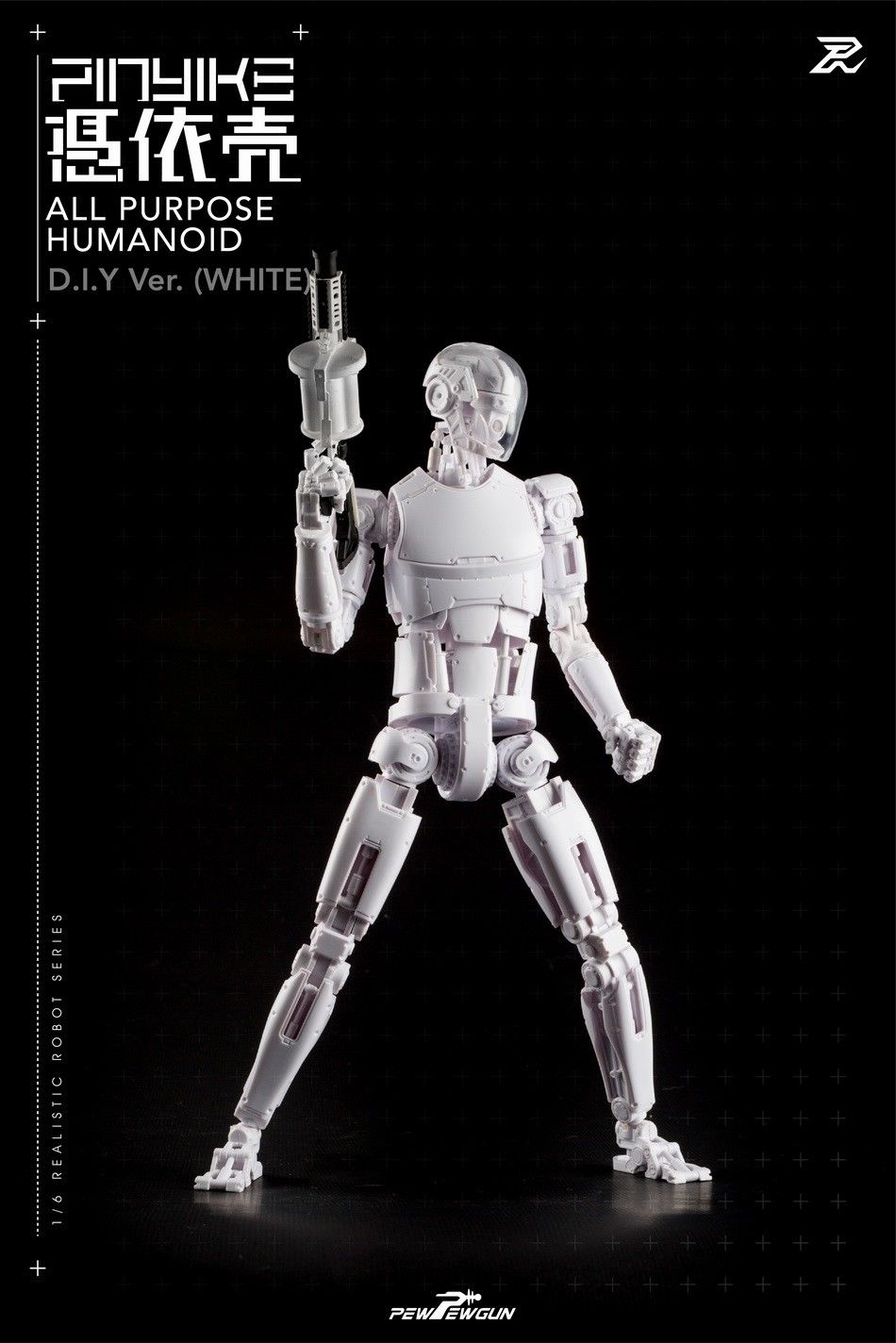 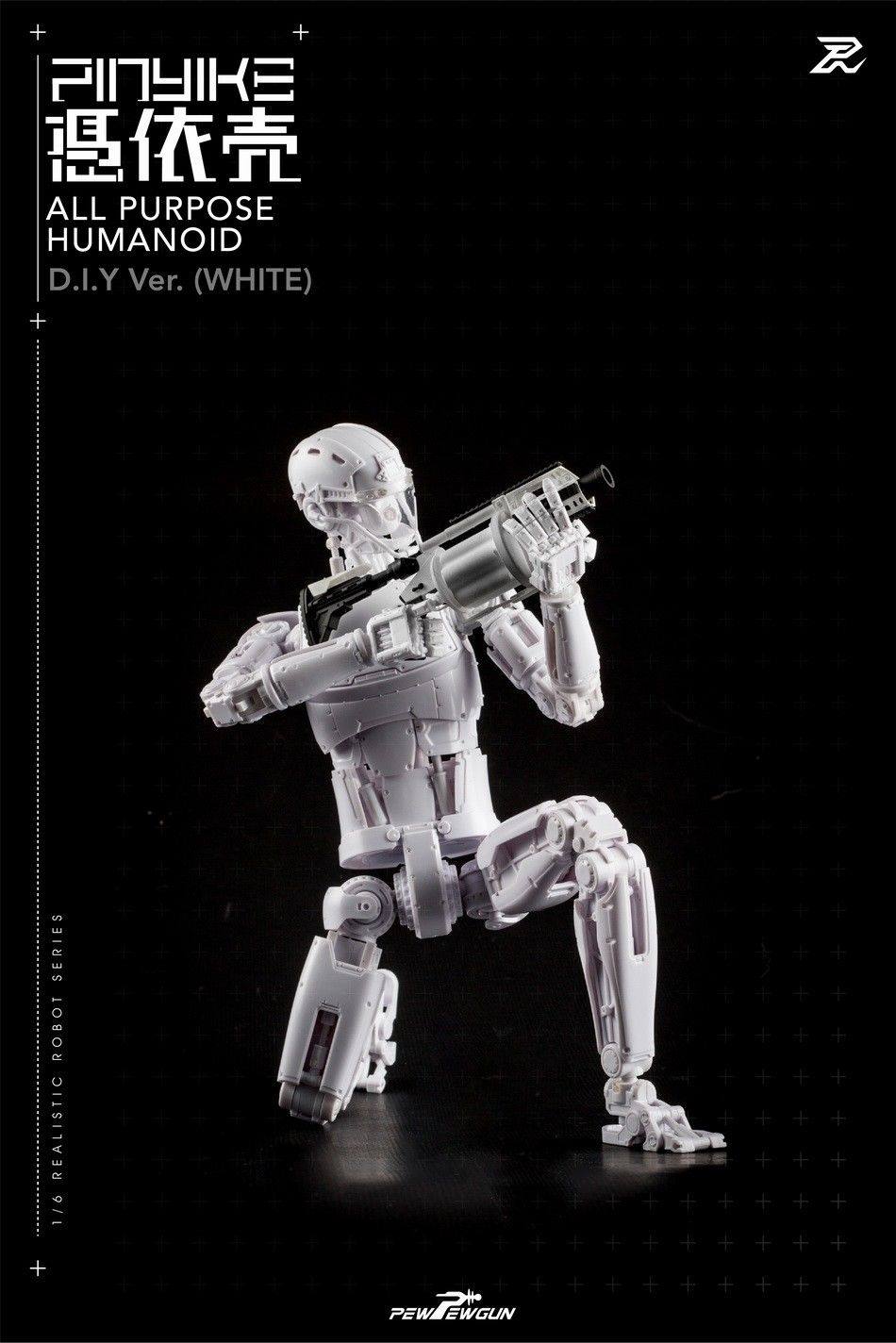 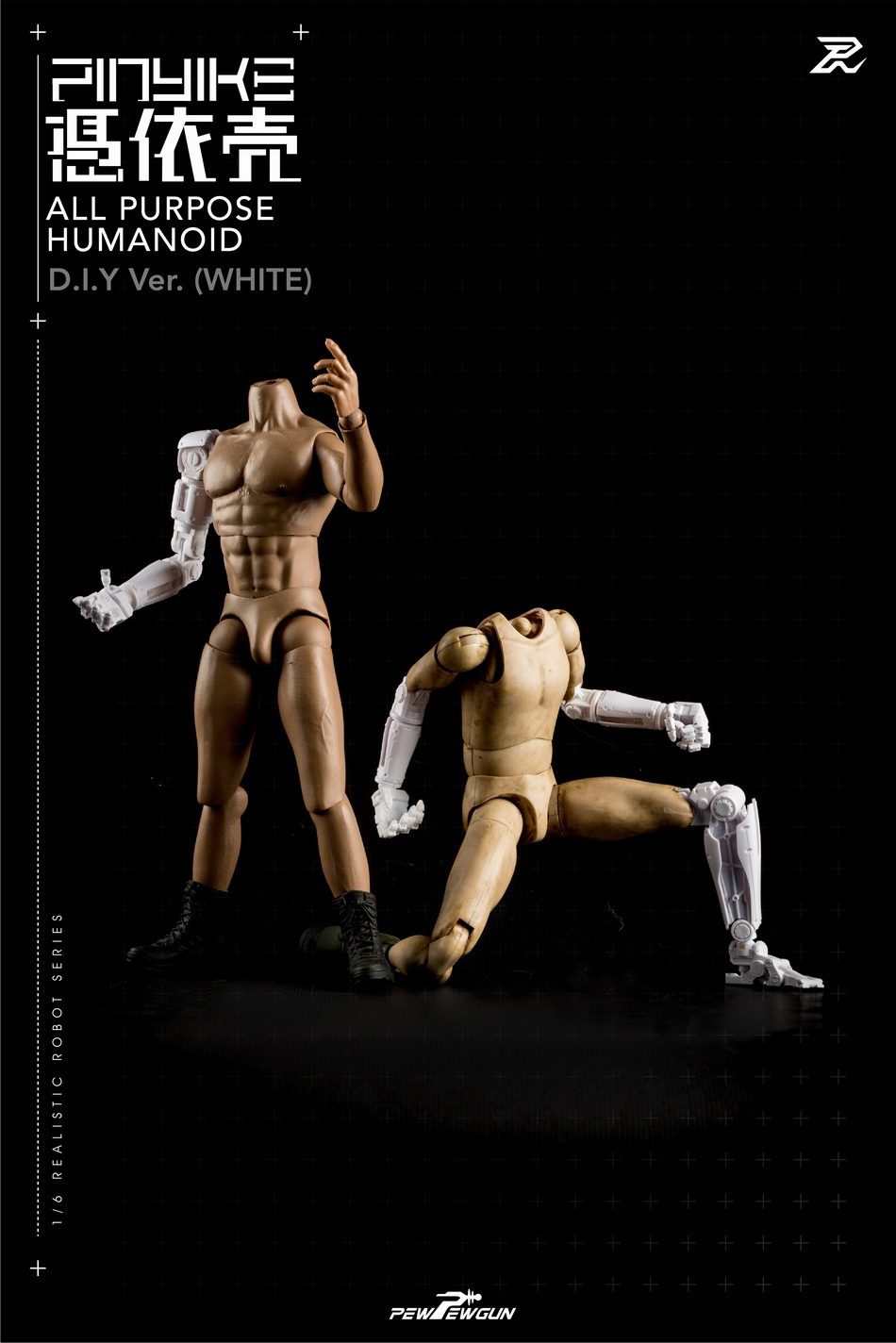 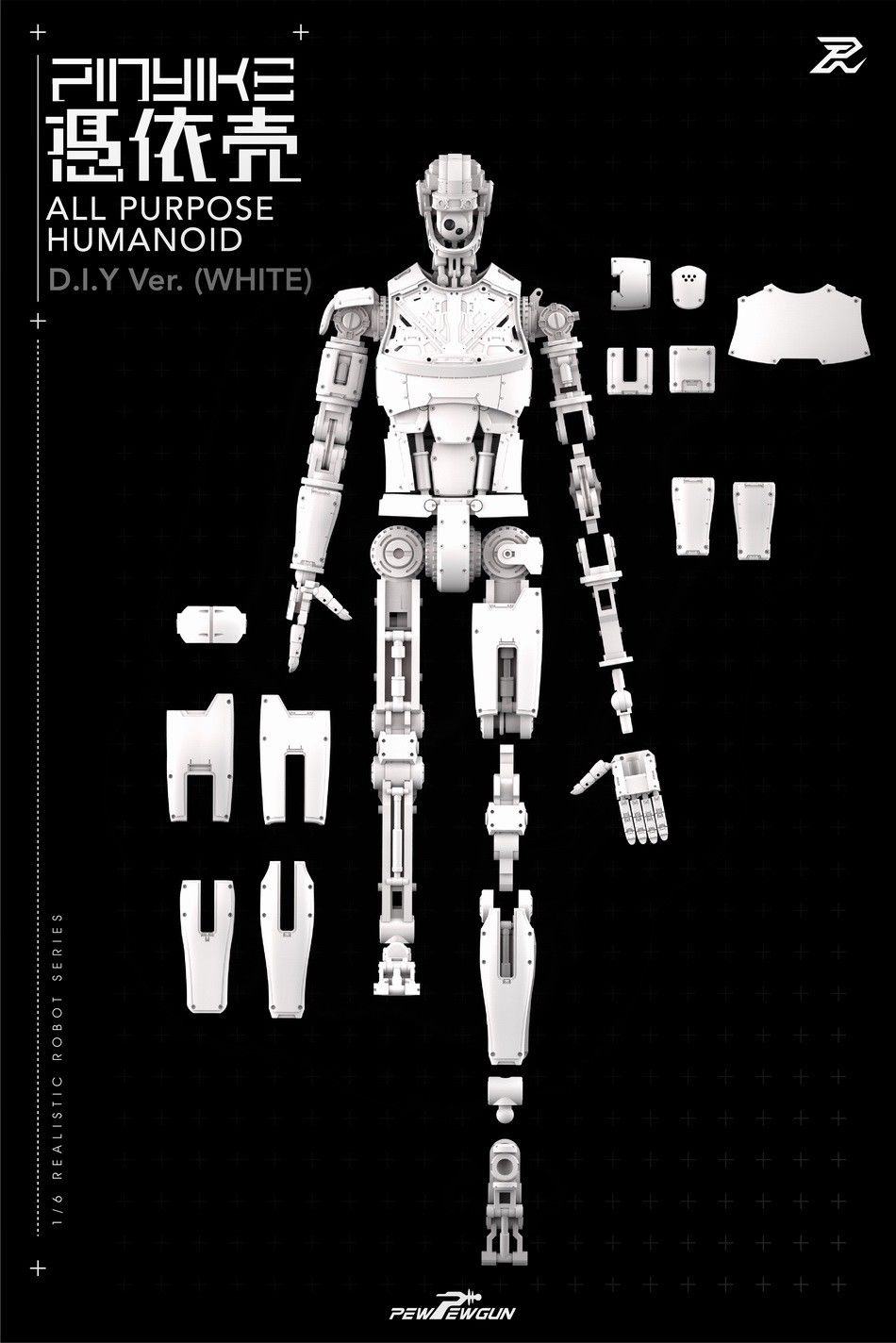 Not so long ago I received 5 items from Pew Pew Gun:
Shen light armour figures (normal red, exclusive white edition and exclusive black edition), the silver light armour accessory pack and the Pinyike clear armour pack. I will be focussing mainly on the Shen sets for this review. 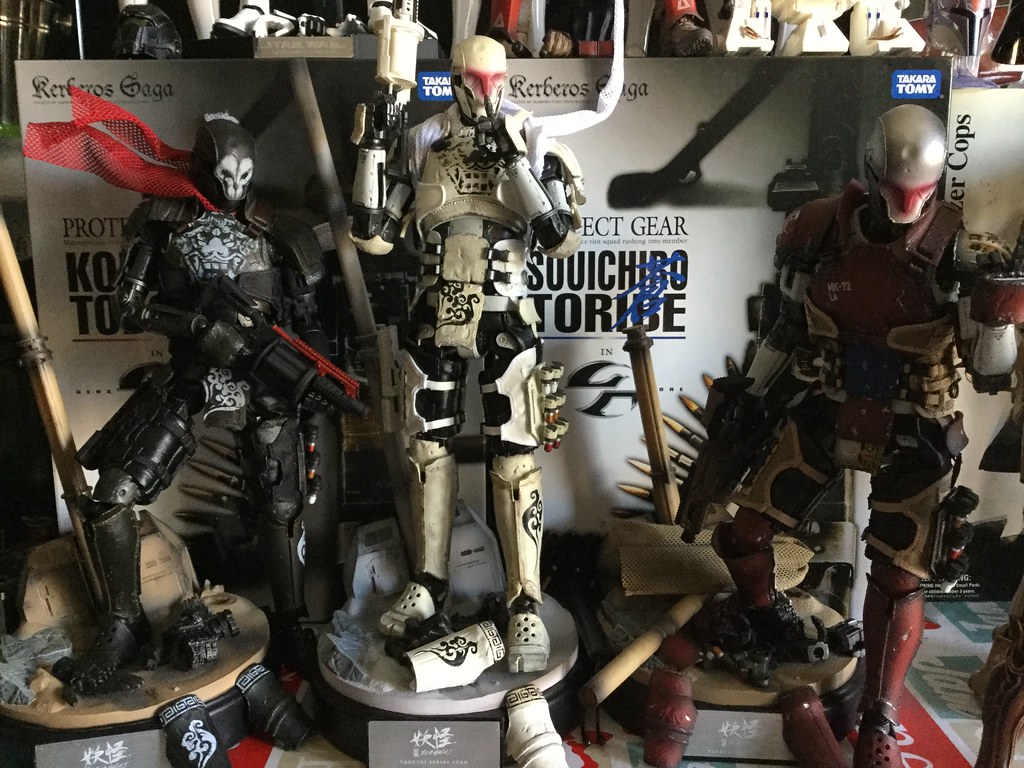 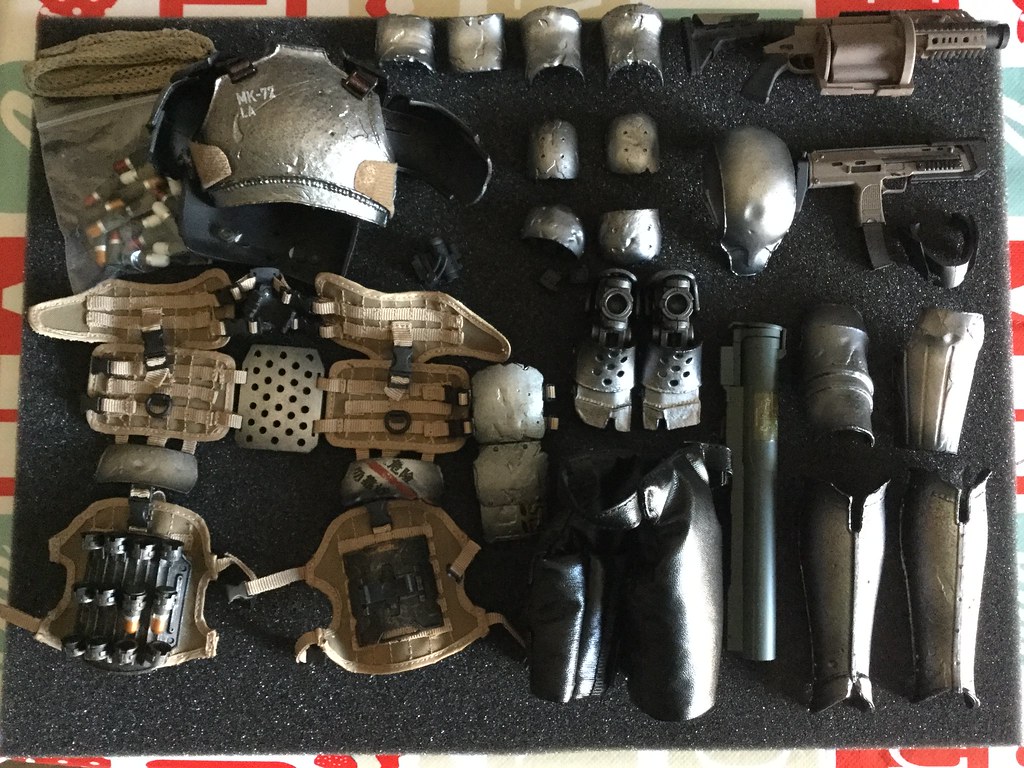 
Now, I love Pew Pew Guns prior offerings and hadn't had much/any QC issues with their Pinyike figures but these newer Shen Yaogui figures are more of a mixed bag:


Great designs and paint work:
These figures look fantastic and it not so common to find original figure lines this well designed and stylised outside of movie/comic/game IP's, so I am very glad to have them in my collection.
The design of the Shen figures seems inspired by the monkey king but with the futuristic robot theme and scavenged armour appearance. It is a weird mix but it works very well.
The base body is the Pinyike robot with most of the basic armour, over which the outer light armour, shorts and gear are attached.
The inner pinyike body and armour plates are very cleanly sculpted and cast with no noticeable mould lines or paint slops in sight while the outer amour is sculpted to look old, battered and weathered. Again, the moulding is great and the paintwork is exceptional. The armour looks great full stop.
The padded crotch-less shorts (not sure what they are called) are made of pleather and honestly aren't particularly great nor necessary IMHO but they do look fine once put on (which is a fiddly thing to do just put them on slowly bit by bit).
The belt with holster is good though the tiny plastic buckles/clips can be fiddly if, like me, you have man hands.


LOADED with accessories!:
Here is where these figures really stand out. The boxes are very large for a reason: You get a large heavy resin display base with buried tank turret and barrel poking out (barrel is as long as the figure is tall), the attaching crotch grabber style stand post, Pinyike base body with head, power cell, fixed pose hands (3), articulated finger hands (2) and armour plates, Shen armoured feet, the full light outer armour, 2 part helmet, pleather crotchless shorts, belt with drop leg holster and grenade holders, 18 grenades, grenade launcher, missile launcher, MP7, attachments for the weapons and scarf!

Sturdy packaging:
The packaging consists of 3 foam trays (1 for the base, 1 for the body and 1 for the armour/accessories), sturdy 2 part art box, clear plastic wrapper and outer brown shipping box. The figures should all arrive without crushing though the art box might get some dents here and there as the brown shipper is not particularly strong or thick and no corner protectors are used.

Non functioning display stands:
Ok, this is a weird one but the resin display bases on all 3 figures suffer the same issue. The socket where the crotch grabber is to be inserted is not large enough to fit it in and since there is no gap for the clip to pop into it wouldn't stay in place anyway. You will need to drill out the hole a bit then glue the crotch grabber in. Honestly I will just use the bases without the post/grabber.

Ill fitting armour parts:
The back plate has a couple holes to insert two tiny pegs in that hold up the waist gear/belt. The problem is the little pegs don't want to fit in.
Additionally the wrist armour plates require heating and re-shaping to attach to the forearms (hence why I haven't put them on in the pics) but they do include instructions stating to do so.
The other big issue is that the elbow armour plates keep falling off as the pegs on them are slightly too small.
All these issues are fixable but that should not be necessary. 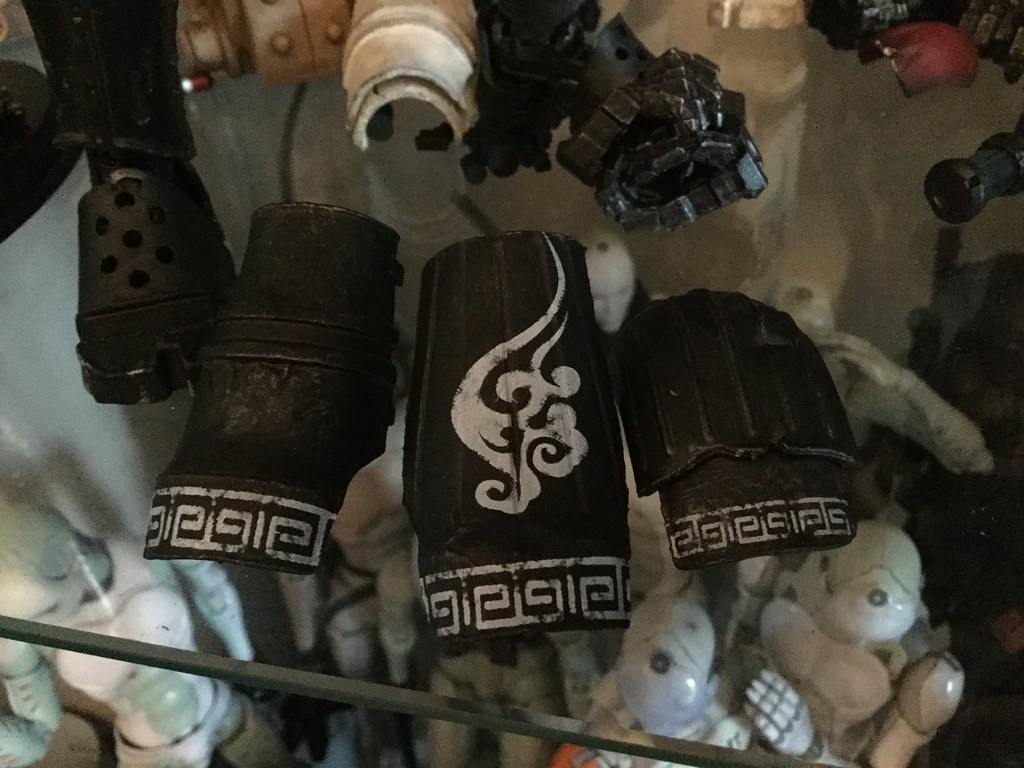 Ill fitting weapon parts:
The attachments are a pain the a** to fit on. they have tiny pegs that insert into tiny holes but the are either too small or too big, so parts either don't want to attach or fall right off. Mr glue will solve the issue but it will remove the option of multiple configurations. In addition to that the parts feel like they would break if forced so it is another case where less would be more, the the figure suffers from over design in areas as I will go into below.

Overly complicated design:
As I started getting into above, there are parts that are needlessly complex. I already mentioned the small attachments on the guns that honestly could have been part of the main mold or given more simple scifi designs and sturdier attachment methods. The armour is also overly designed in that there are two layers of it. It would have been simpler to design the figure where the armour attaches directly to the body and more securely. Hell, I would honestly have preferred the armour be part of the body itself and have a more sturdy figure because every clip/attachment/armour plate/etc is another point of potential failure/breakage.

Materials:
Ok so not many parts to complain about here but the few parts are kind of a big deal to me. I already mentioned the problem with the resin stand and each crotch grabber post hole is slightly different on each one. it seems that the process of casting the base results in the inconsistent and poorly done sockets. Ok , this is more a moulding issue than a material one but they are related and the weight of the base adds to the shipping cost and of course chipping will be a potential issue.
Meanwhile, the weapons and attachments are made of light fragile feeling styrene or similar plastic that feels like it could snap if forced, and the hinge for opening the grenade launcher when inserting the grenades feels tiny and fragile, so I ended up not loading the launchers on the other two figures.
Then there is the pleather material on the shorts that will probably end up peeling like so many other pleather items from other brands.

Mixed overall QC:
The shoulder pad fell off my black Shen due to the glue coming unstuck while another one had the velcro patch on the chest armour came loose. Then there were some loose joints on the base bodies here and there which added to the reduced excitement upon setting up the figures. I expect that the separate silver light armour pack will have many of the same issues.


Overall these were a mixed bag but I can't deny how cool they look and with some fixes they will be better but still not perfect. I loved the Pinyike bodies and the clear Pinyike armour pack was just as good so hopefully the Shen figure issues will not be repeated and future releases will be better. I still like Pew Pew Gun and I am glad I got the figures 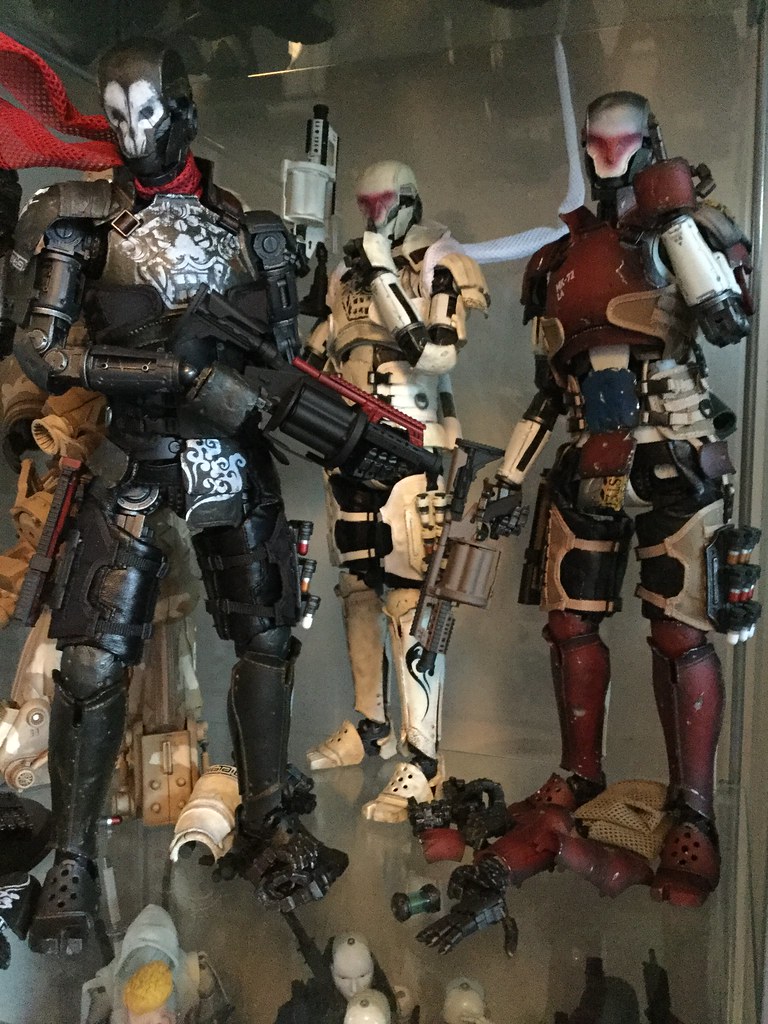 PewPew Gun just put of for pre-order their new line of 1/6 robots.  Some pretty cool stuff: Also, it looks like you can order the base model.  Not sure if these have always been available or are back up now, if these are pre-order or ship immediately.