Another of my mini reviews on items I have had for a while.

This time I am looking at my SideShow Speeder Bike and Scout Trooper.

I thought it would be good to look at these now as the Speeder Bike has just been re-released, and the Biker Scout is about to be re-released by SideShow.  Typical of SideShow that. I looked for ages to get one of these in reasonable condition and at a reasonable price

The bike is in my opinion the best detailed version of the speeder bike available.  Sideshow have gone to great lengths to recreate the engine parts and all the controls, and have also done a very sympathetic job on the weathering.  I am aware that some feel that this version is to small and that the Hasbro bike is proportionally better, however after examining as many screen shots, production pictures, and even reproductions of the artwork used to design and ultimately build the real bikes I think this one is nearer to the original film used props.  I have both this and the Hasbro version, and in truth neither are absolutely proportionally correct, and this is a little bit shorter than it should be, where, according to my calculations and measurements, the Hasbro is wider, longer and has an overall more chunky look to it.

The Speeder Bike comes in several pieces which need to be assembled.  Some of the parts are quite thin and fragile so you do have to take care when putting this together or taking it apart.  The thinner parts around the control handles are particularly delicate, but then the overall look is all the better for them being near to scale sizes.
There are a number of moving parts such as the handlebars and pedals, the exhaust covers at the rear and the fins at the front of the bike which helps in getting some very realistic looking poses with this model.

The bike is supported on a single metal rod which slots into the bike and a weighted base which keeps the bike very stable.  The bike can be angled on the base to get some good action poses as if it is turning etc...
The base comes with some woodland scenery to cover the black plastic with if you wish, and I have also used the similar base cover from the Biker Scout figure to add to this an completely cover the base the best I can.  You can see in the last pic of the bike on display that I have now also added a 1/6 Black Series Rebel commando helmet too just to add to the effect.

The Biker figure is pretty standard SideShow fare.  The costume is very well recreated and due to the sparser armour and no padded suit the joints remain fairly flexible.  Its a reasonably possible figure and can be made to pose on the bile in any number of convincing riding poses.  It comes with boots for standing and the ones seen here which have the toes positioned to sit correctly on the bikes pedals.  There are also spare hands for relaxed look, holding the handlebars of the bike and the included blaster pistol.
As mentioned the base comes with a a cover to make it look like the forrest floor.

This figure does not need the bike and it does make a very nice stand alone figure, although it is of course nice to be able to display both together. 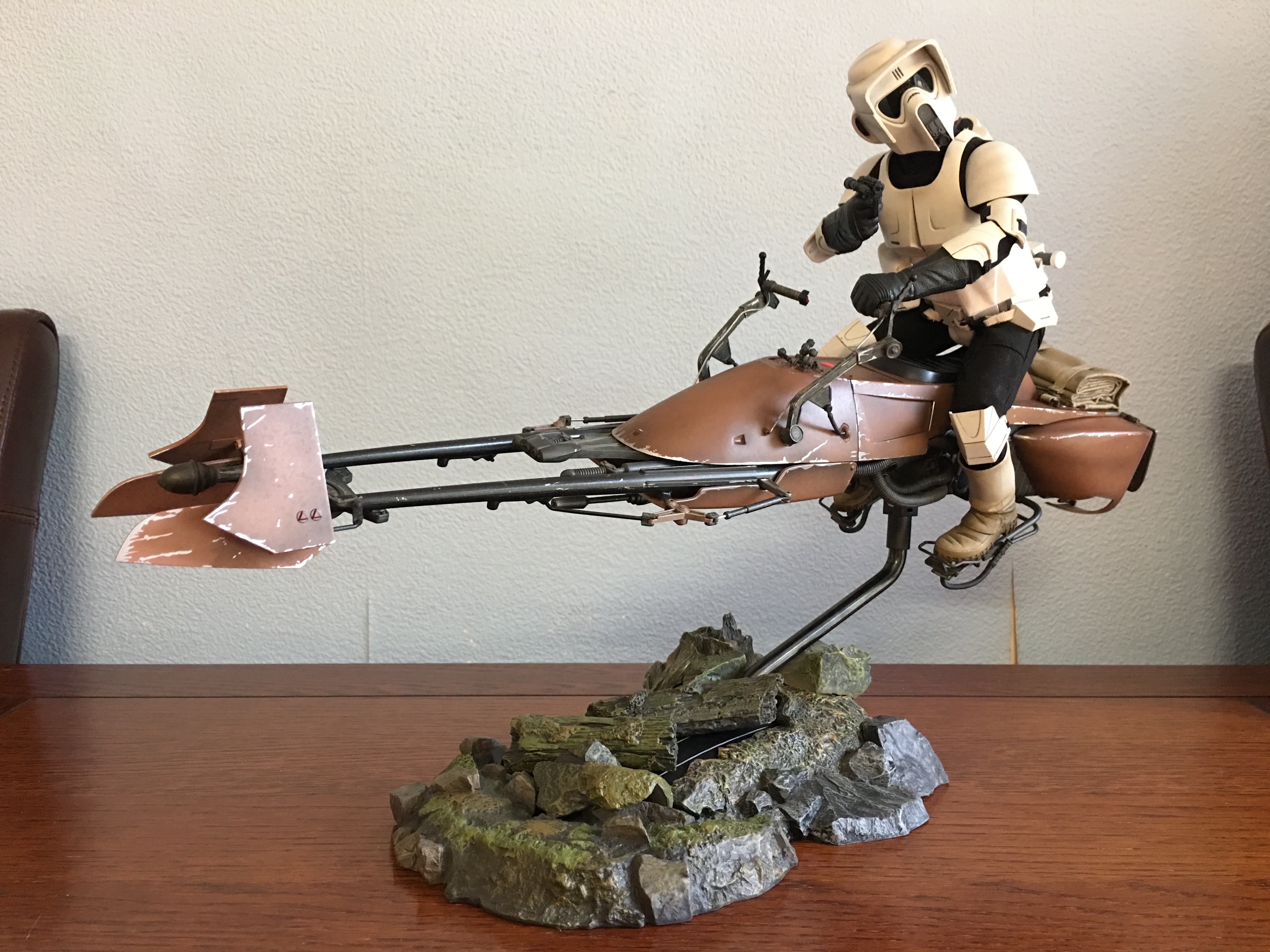 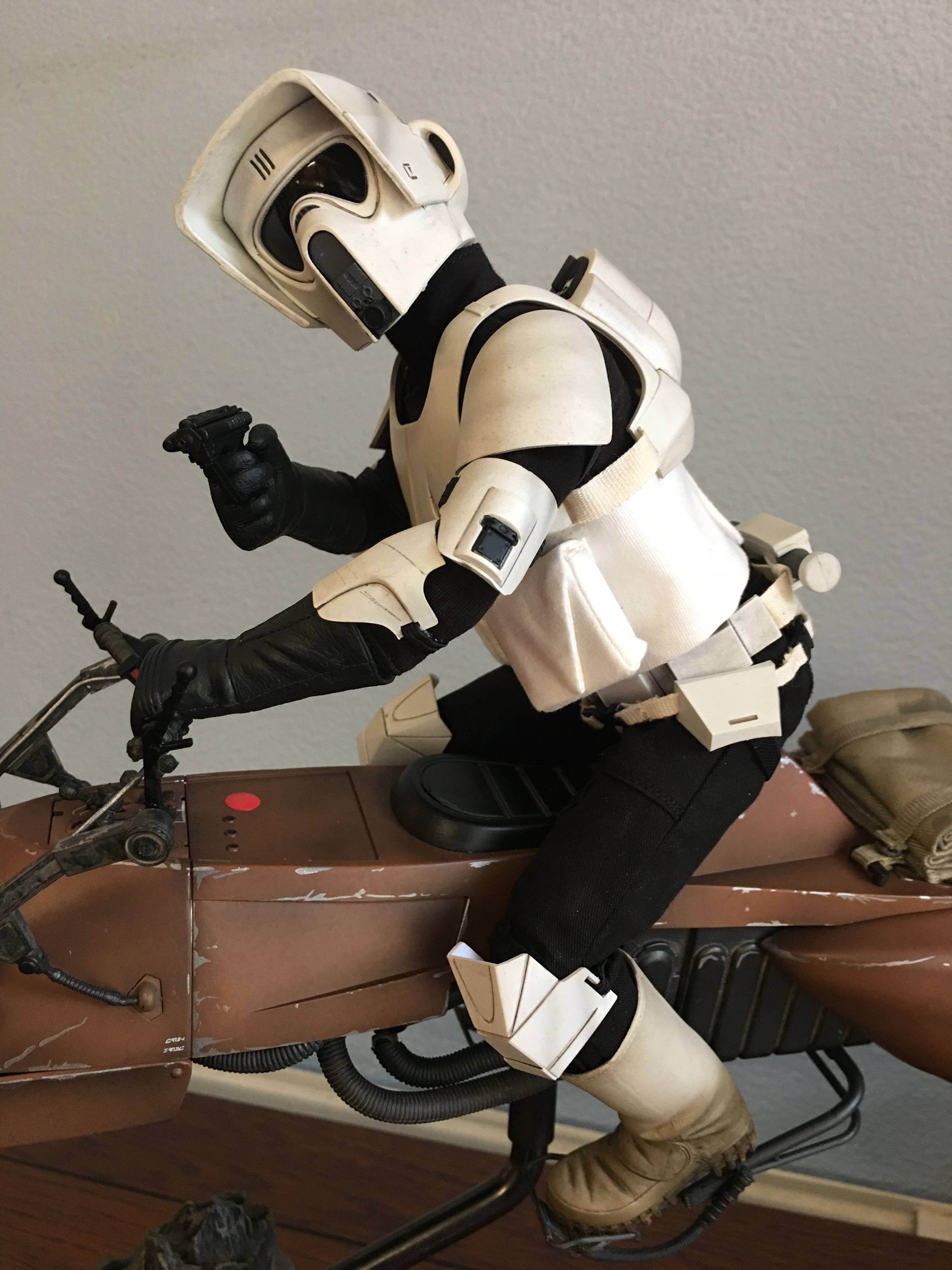 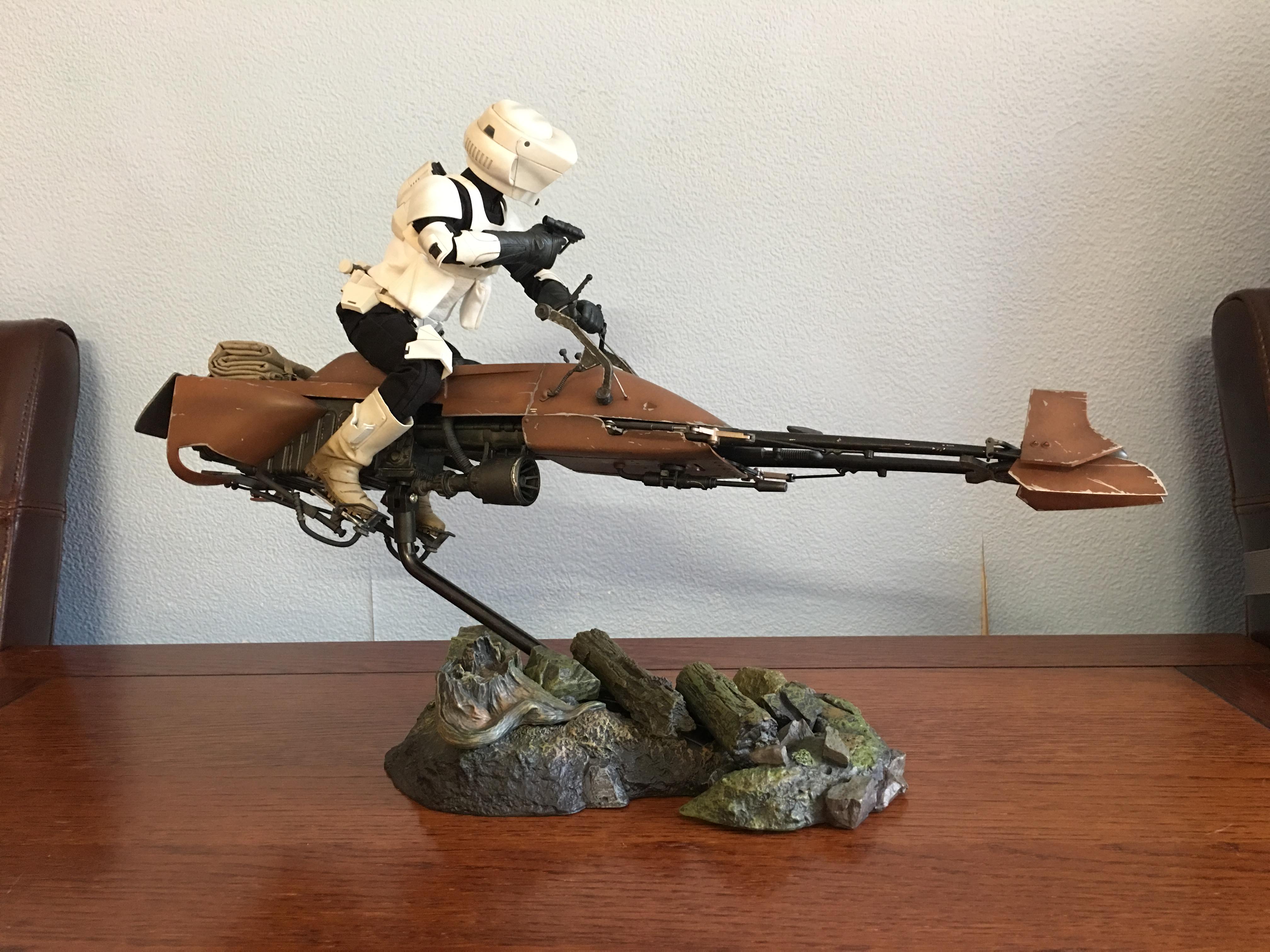 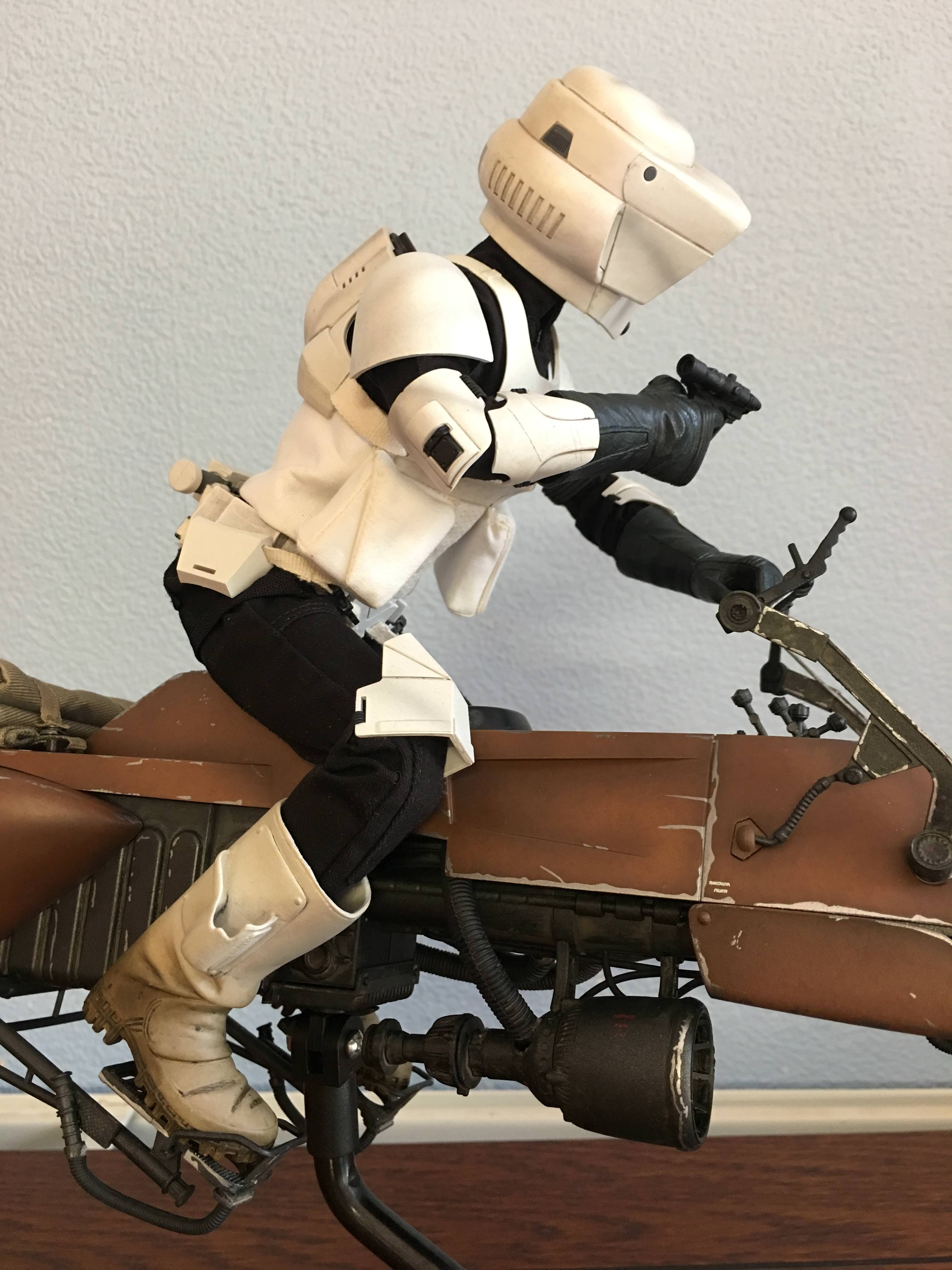 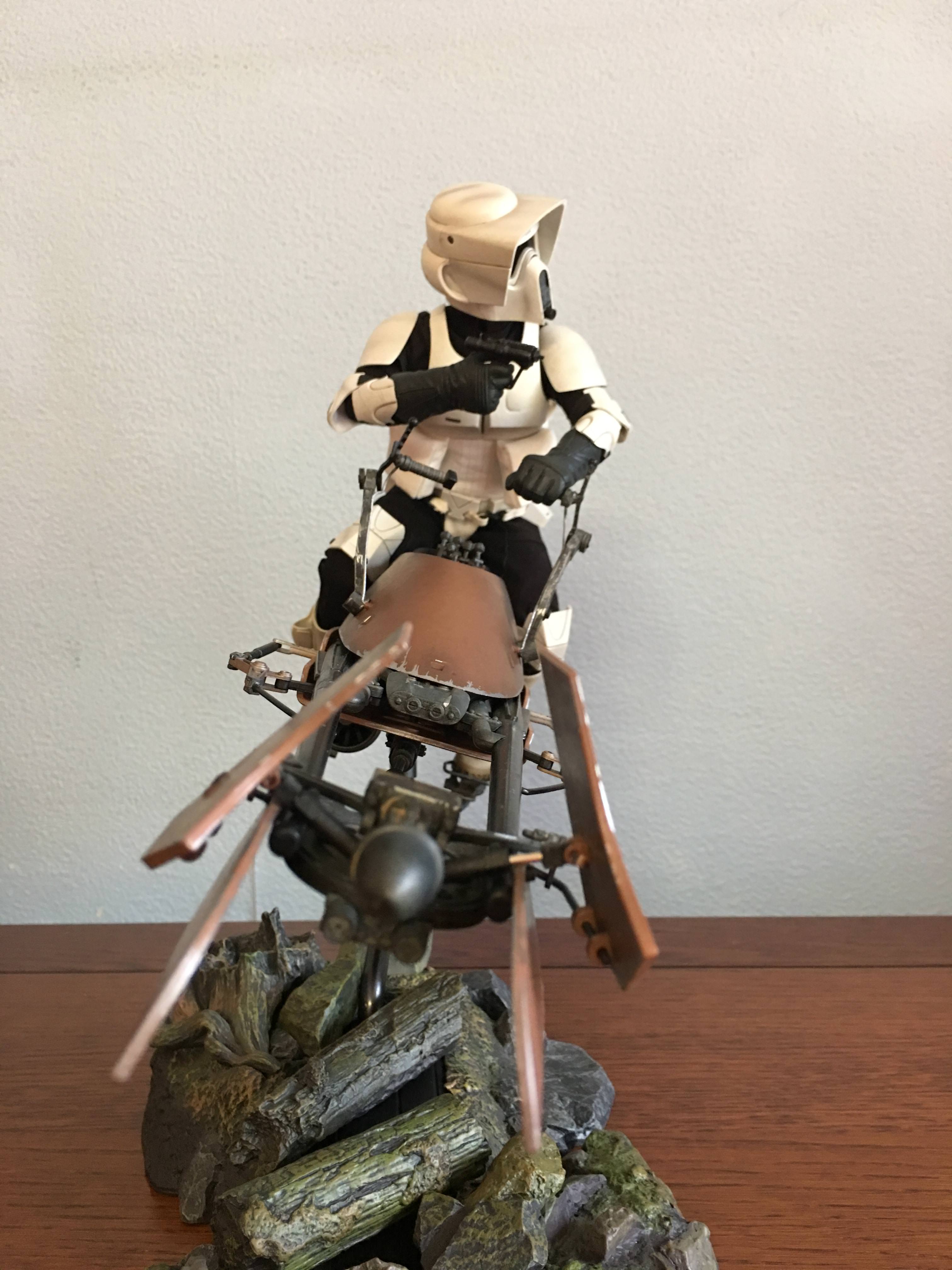 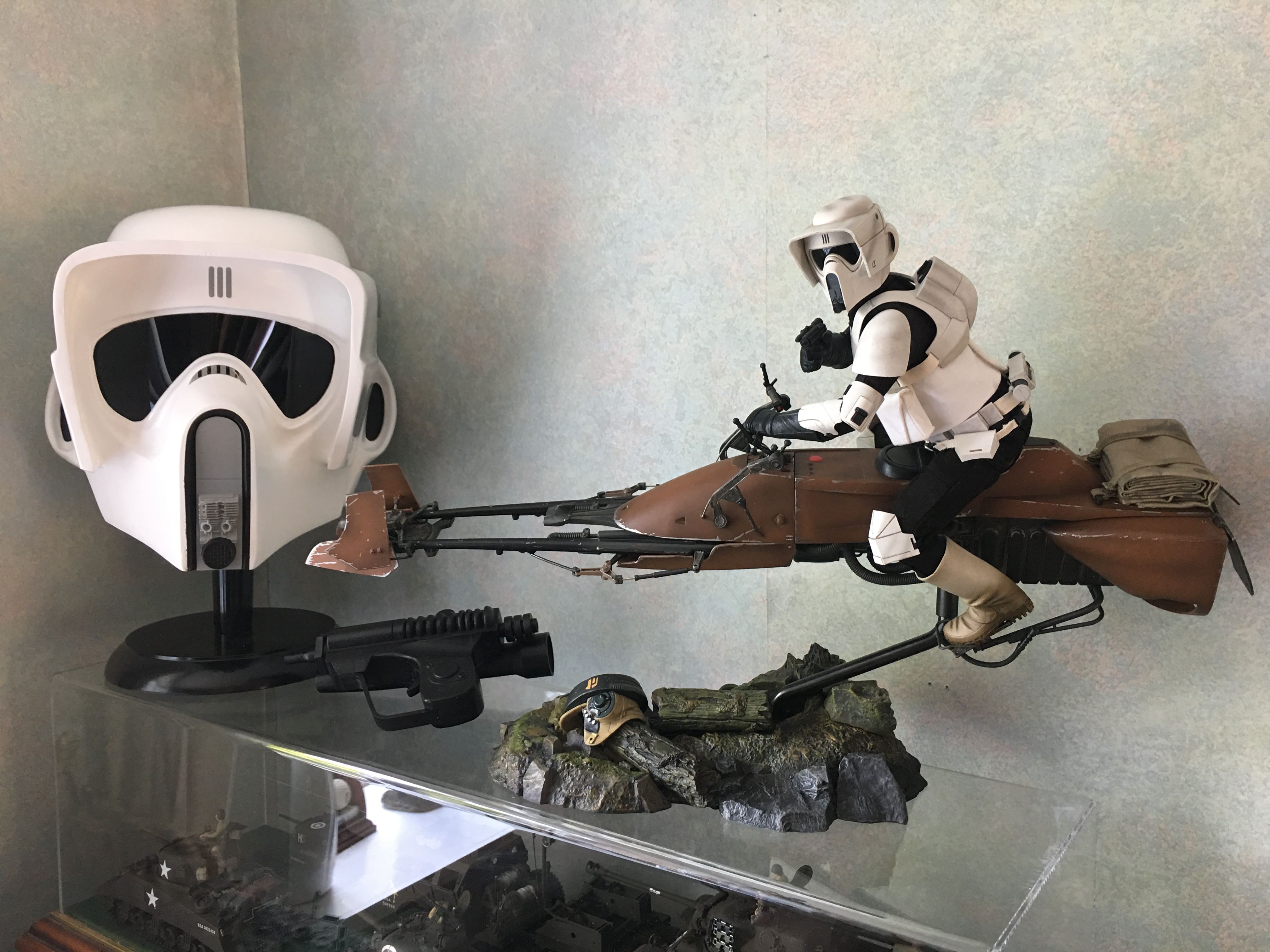 I hope you enjoyed this mini review, and as always any comments are welcome.