I thought it would be a good idea to repost some of my reviews from OSW to here so that members here can find them, so to start here is my review of the Hanroku Genocide Trooper (red Kickstarter edition and GreenWolfGear Saltblack edition) both by Green Wolf Gear and Snow Corporation. 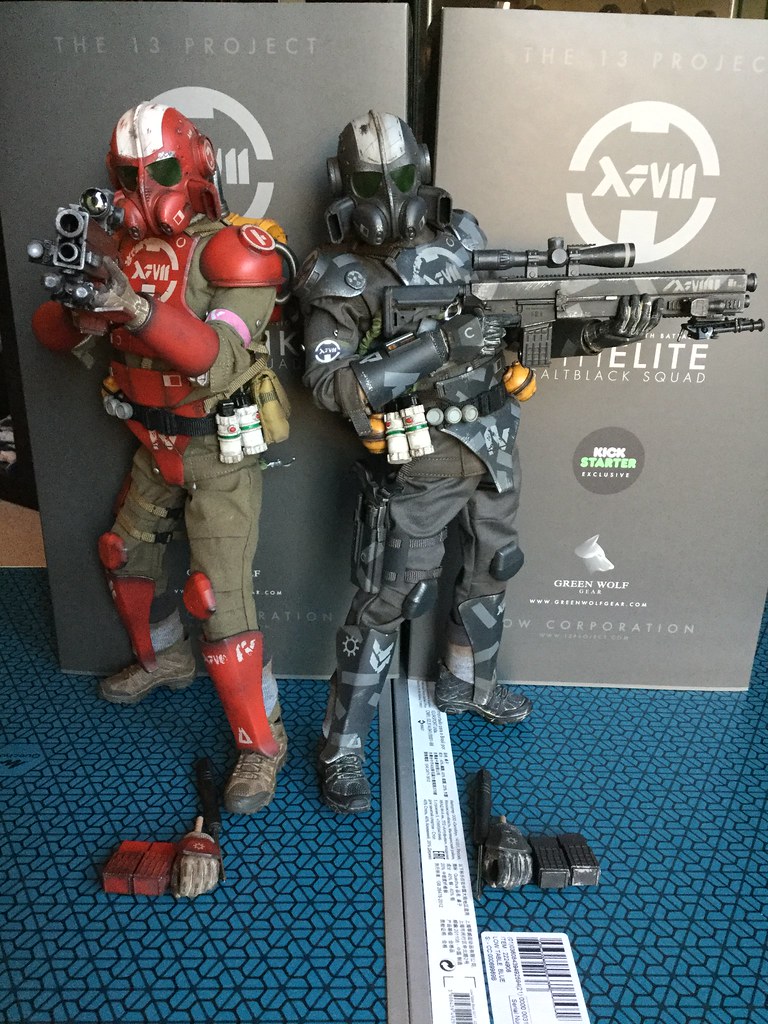 They are very cool looking figures and great first offerings but not perfect.

I will list some of the main things I noted while assembling and posing them below:

Great sculpting on armour and weapons:
Clean sculpts with detail were it is required and little if any mould lines or surface blemishes.

Good paint on said parts:
There is a decent amount of weathering and decals with no noticeable mistakes and the lines are neat.

Clever use of magnets across the figures (to reduce the fuss of fiddling around with tiny buckles and clips):
There are magnetic attachment points on the back plate, knees. shoulder pads and belt. The magnetic mines (?) magnetically stick to the belt while the knee pads attach to the knees and stay in place (though prone to being knocked upside down as they are held with the one magnet).
The shoulder pads do not have any accessories to be attached to them but it is nice to have the option (you can place the knee pads or sticky mines on them if desired).
The backpack attaches to the back plate magnetically though the glue holding the magnet on the back-plate came loose on my saltblack trooper so something to keep in mind.

Sturdy packaging:
The packaging consists of a foam tray that holds the figure and bagged accessories within a plain but sturdy cardboard window box that has the window cover flap common in the hobby. Outside of that there is the outer card sleeve with the images of the figure and printed info. All this is protected by a clear wrapper within a standard brown shipper with plastic corner protectors taped on.

Sprung bipod attachment:
Kind of a small thing but I love that the rifle bipod has springs that hold them in position so they aren't flopping all over the place.

Inclusion of mini screw driver:
Again this is a small gesture but if like me you are always looking for mini screwdrivers to open battery compartments it is a godsend to have one included. I have yet to actually use the included one as I probably won't bother putting batteries in (no need for light up gimmick that I will use once then never again, but again, it is nice they included the light up feature).

Use of metal springs instead of rubber hoses:
One thing that always bugs me with figures where hoses/tubes are required is the use of rubber for said parts as it is prone to cracking/ degrading. Springs are the logical alternative IMO and I wish more companies would use them (In this case though it is a double edged sword as I will get into later).

Loose joints:
The body has difficulty holding poses especially where the arms need to be raised (they just fall back down under the weight of the gun) so posing is sometimes frustrating. Luckily I think everyone is used to body-swapping figures anyway but still, it should not be necessary at the price point. Additionally, the wrist pegs pop out VERY easily so bulking out the pegs will be necessary.
The other issue the loose joints causes is the head often not staying in place as the thick spring on the back snaps it back. I think that this is more due to the helmet simply sitting on an insert neck socket (the kind that goes inside neckless head sculpts to attach to neck posts) and simply gluing the socket into the helmet would hold it in place and the tension of the ball/socket should be enough to hold poses, in theory at least. I have yet to try the mod as I will likely wait until body swapping first.

Lack of stand:
This would not be an issue were it not for the loose joints that make standing in anything but a neutral pose difficult. Luckily most of us have spare stands and generic crotch grabber stands are cheap and easy to get. Of course that means a stand could have been added easily at little extra cost but like 3A/Threezero they decided not to bother with any, which leads in to the next point:

A little light on accessories (standard edition only):
I got the Standard editions of the figures so no rocket launcher is included (my own choice due to limited funds) and while it is not an accessory I particularly want but the lack of it does make the figure feel a little light on accessories.
That said there is still a fair amount there: one extra hand, the rifle (with 3 magazines, scope, bipod and laser/light), handgun, 3 sticky mines, 2 smoke grenades and 2 explosive grenades.

Loose attachment rails:
This mainly applies to the rifle scope on the top rail as the others seem fine, but the scope slide right off the rifle if pointed up or down. This is kind of a big deal as it simply does not function. It can probably be fixed with some smart use of nail varnish on the part of the scope that attaches to the rail to tighten the fit a little, or you could glue it in place.
If I am being completely honest I think rails and attachments on a lot of brands have issues of either being too tight or too loose so it is not out of the ordinary but I think companies should adopt a 'less is more' approach by foregoing a little of the realism in favour of something more reliable and durable because I have lost count of how many little attachments I ave lost or broken trying to attach them via the rail system. I think Threezero have the right idea with their weapons where the attachments are part of the main gun mould or are glued in place. All we really need are extendable stocks and removable mags to be honest (though I am sure that is going to be a controversial statement here. I would prefer weapons that look good but are also sturdy and don't fall apart). I may have gone off on a tangent there but the loose rail is kind of a big issue on these figures.

Lack of weathering on uniform:
This isn't really a big deal as most of us can easily add weathering ourselves and having clean uniform does mean we have more options especially if using for kitbashing so technically this could be a positive, but it does give the figure an inconsistent appearance having the armour, weapons, gloves and gear all weathered and battle-worn but the uniform is all clean and new. Of course, in my imagination the troops were just issued freshly laundered BDU's so it doesn't bother me but other collectors may find it bugs them more. I know some people complained about the boots being plastic rather than pleather/fabric but again I am fine, pleased even, that the boots are plastic bootfeet as the fabric/pleather ones usually break very easily and often look oversized/lumpy. So yeah, my preferences may not be the popular ones but I folly the 'form follows function' mode of thinking where durability and practicality is preferred over ultra realism and detail in figures.

I have probably missed a whole load of things that just slipped my mind while typing but hopefully you get a good idea of the quality of the figures and what to expect.

These are honestly great looking figures with some clever design choices they just fall short of the mark in execution/QC,  but as mentioned each issue is easy enough to fix and honestly we have to cut a little slack as these are the first mass produced figure offerings from the GWG x Snow Corp 13 project. Hopefully the quality of future releases (particularly the bodies) will improve with later offerings. 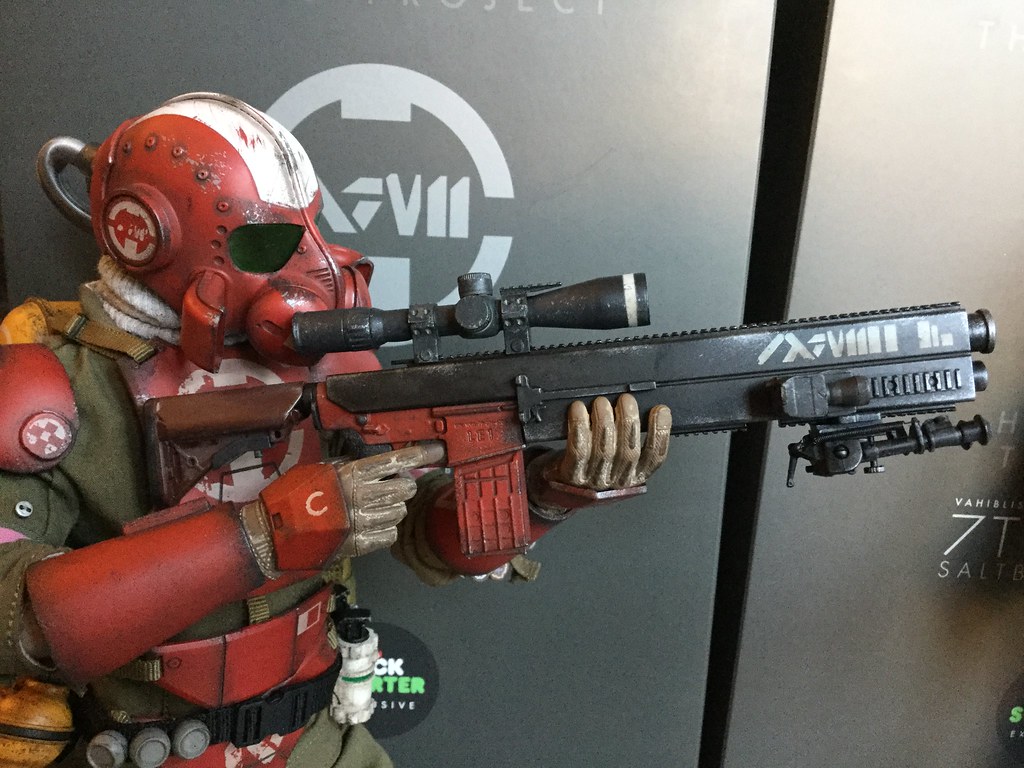 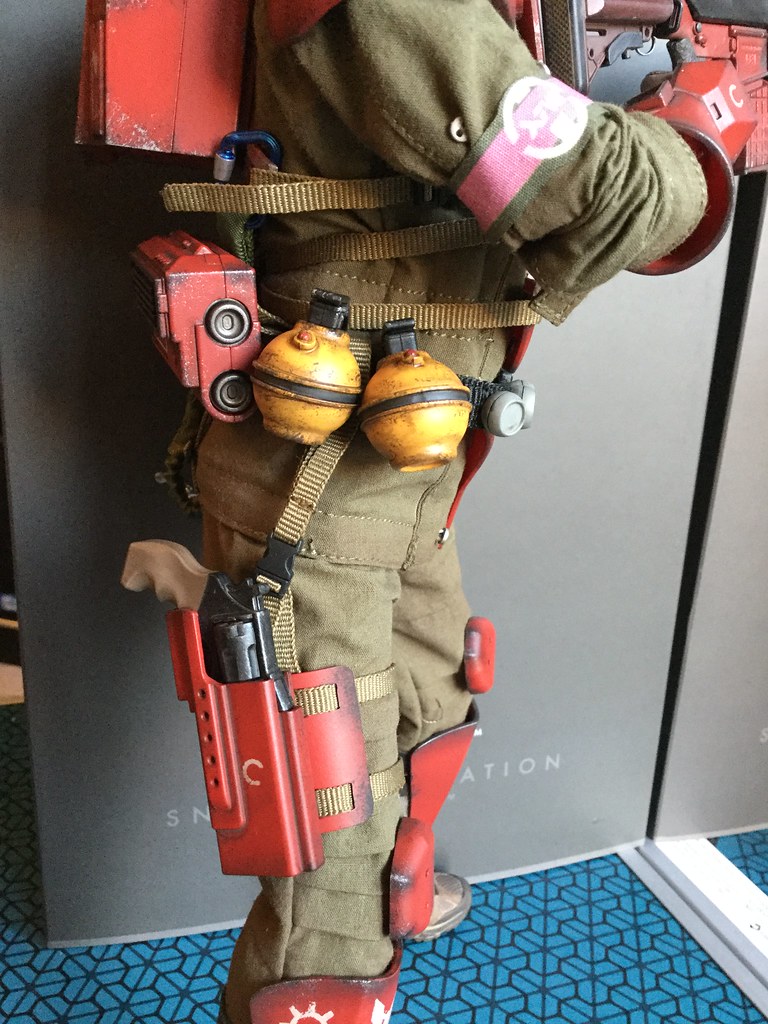 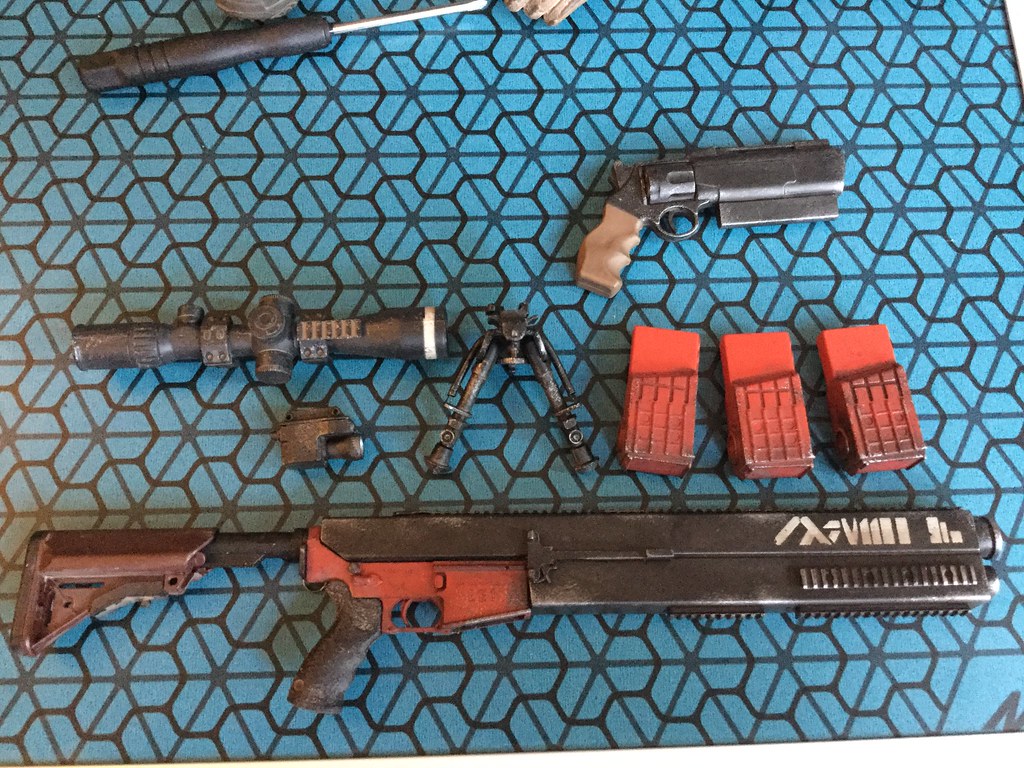 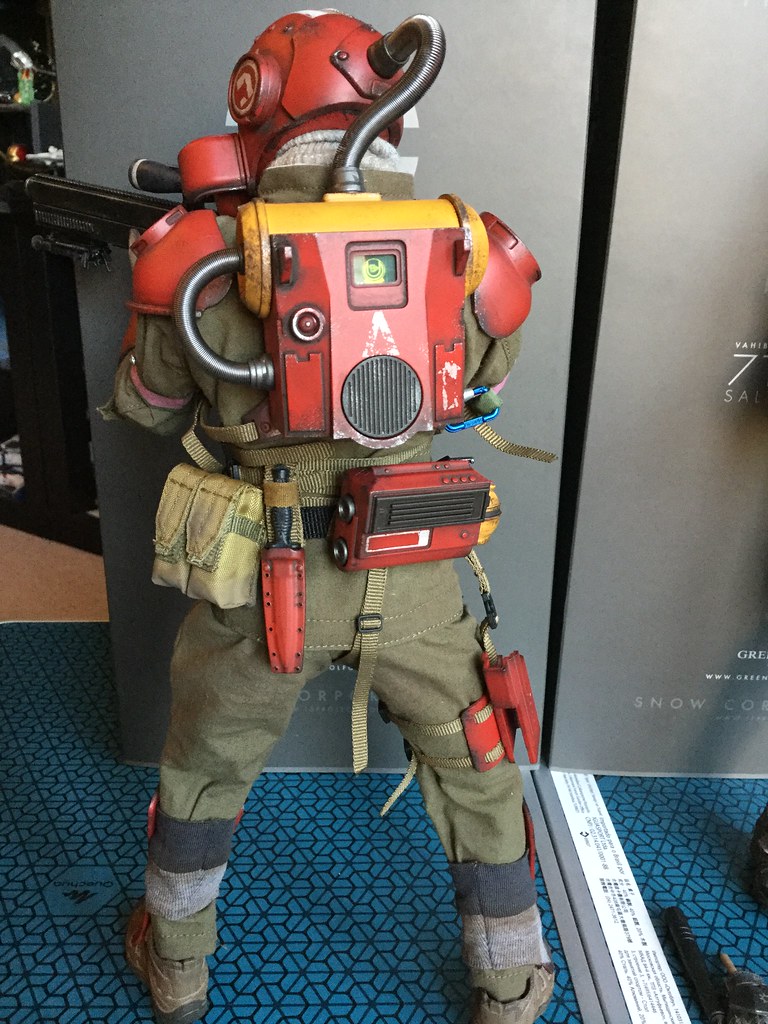 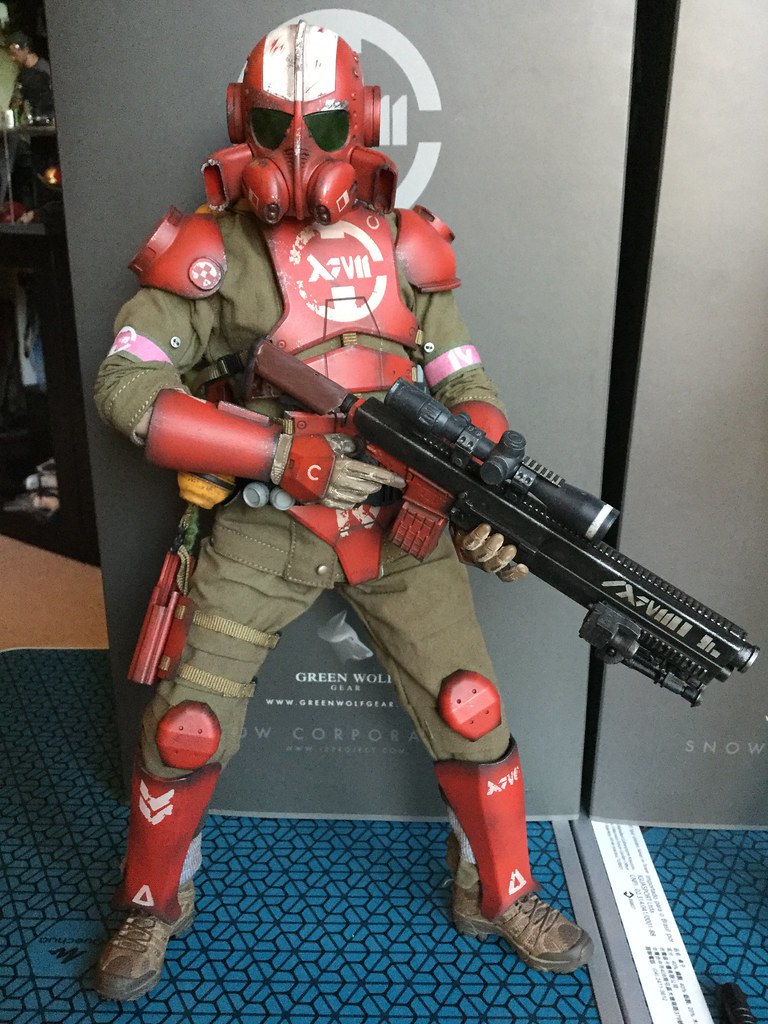 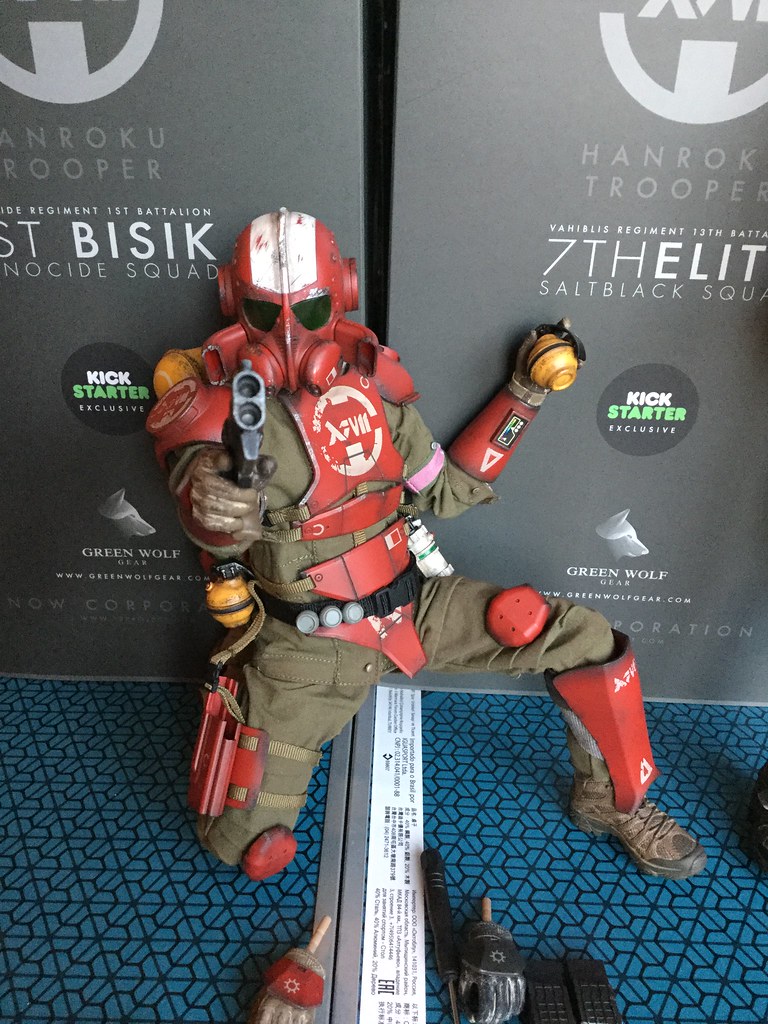