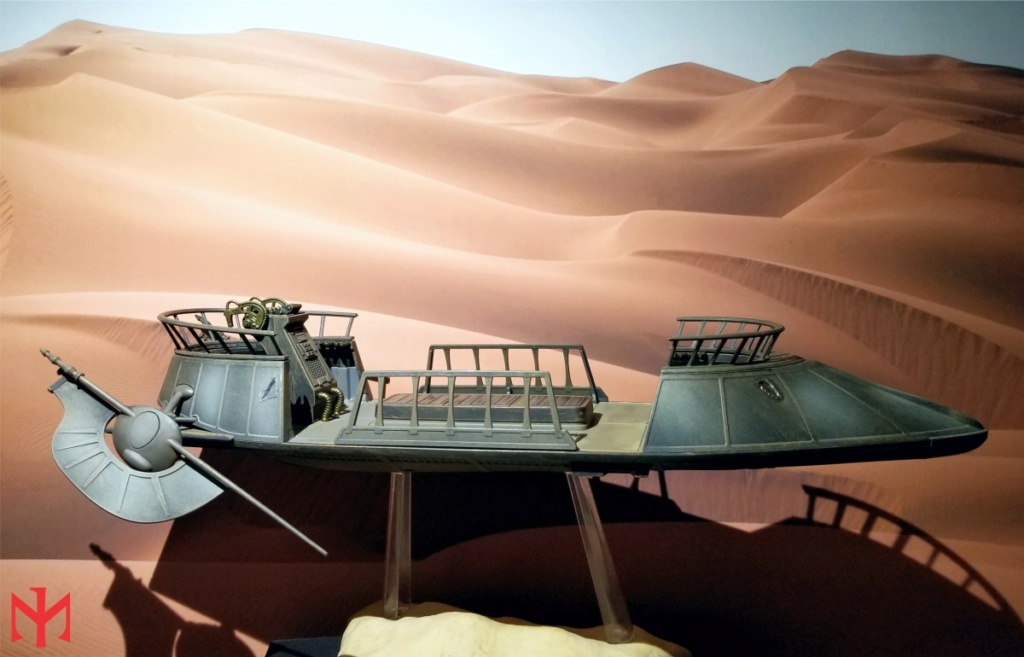 The Jabba subplot is one of my favorite parts of Return of the Jedi, despite various weak elements and horrid changes/additions brought in by the Special Edition. Fortunately (or unfortunately), a large assortment of Jabba-related characters is only available in the "classic" scale produced by Kenner and then Hasbro (3.75-inch figures), and that allows for the production of vehicles and partial sets to go with said figures. In the past year, we have seen the release of a Jabba's Palace Adventure set (with Han Solo in Carbonite and Ree-Yees), the Khetanna (Jabba's sail barge -- exclusively by pre-order from HasLab -- with Jabba and Yak Face), and now the Tatooine Skiff (without any included action figures). This last was one of two apparently identical skiffs that accompanied Jabba's sail barge, and is intended to be the one carrying our protagonists to their intended place of execution. I think we all know how that panned out. 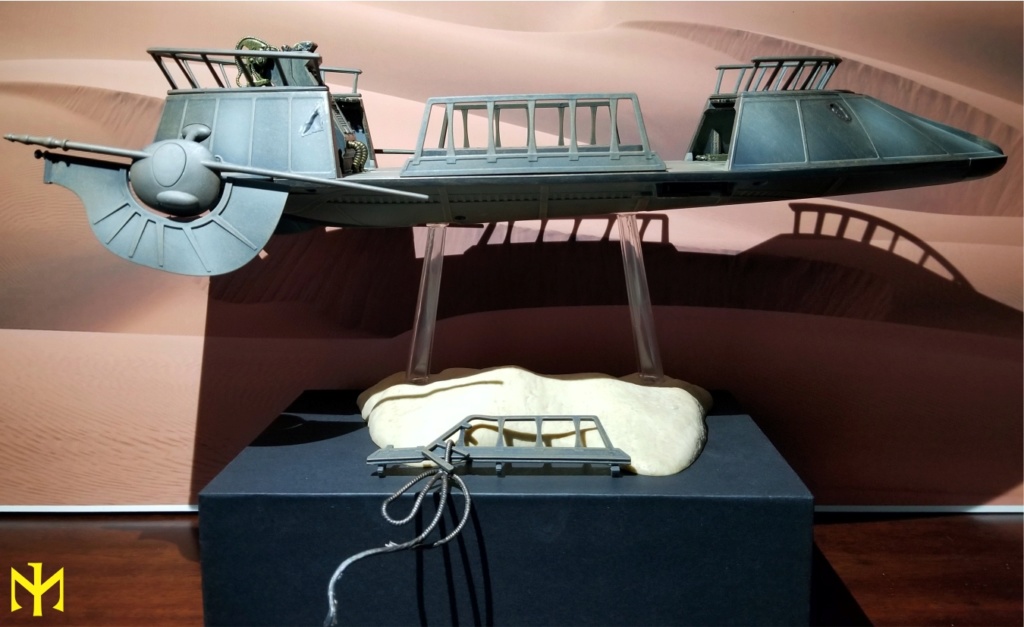 The skiff (apparently given the model designation "Bantha-II" by some over-enthusiastic Lucasfilm associate) is an improved and expanded set compared to the earlier Kenner (or was it already Hasbro) skiff from years ago, which was both toyish and undersized. The new skiff appears to be nearly to scale (at any rate, much more so than the old one), features a more ambitious and aesthetically pleasing stand, has more sensible display options and alternatives, and far more detail. It is approximately 40 cm (15.8 in) long, 11 cm (4.3 in) wide, and 10 cm (3.9 in) tall in itself, or 18 cm (7.1 in) tall when mounted on the stand. It arrives in a rectangular box amply illustrated with photos of the product and a selection of appropriate Hasbro action figures (sold separately). Some basic assembly is required, namely attaching the four railings (the fifth one is an alternative), some of the flooring panels, the two-part pair of steering vanes, and control pedestal, as well as affixing the two transparent plastic supports to the sand dune base. There is a basic little assembly guide to help you out if something doesn't make sense immediately. A sharp X-acto knife would be helpful to slice through all the annoying rubbery elastic ties.

For a basic schematic of the skiff, you can compare HERE.

The skiff is perfectly sculpted (from what I remember and have seen in stills and photos), and very nicely weathered for a fairly mass-produced toy. Below is a look at the (I think unseen) stern (rear) of the skiff. Note the nicely detailed and painted shiny metal elements contrasting with the rusty greenish armored plating. You can also see some of the finely detailed controls, which include articulated handles on both sides (they revolve around their axis). 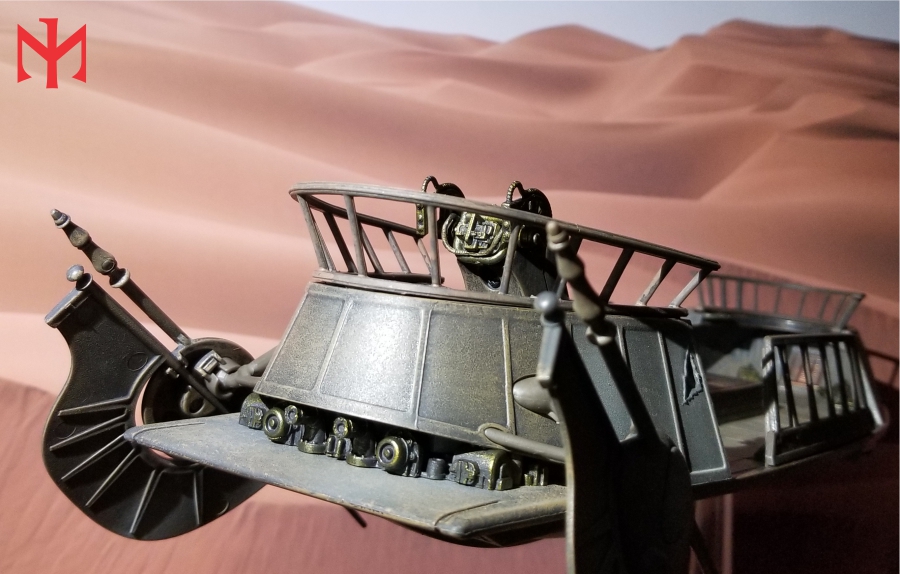 I suspect that at least in some respects Hasbro had to improvise and imagine things that were not necessarily fully developed for the on-screen model. This was almost certainly the case with the details below the deck and under the storage area cover, seen below. 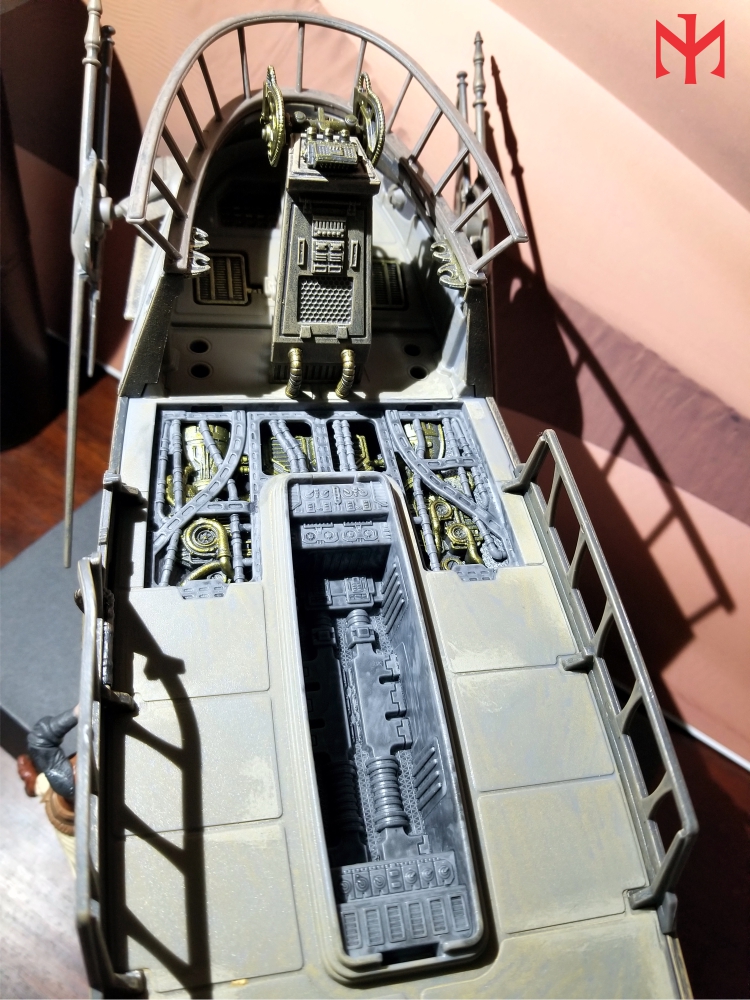 Similarly, the details within the bow (front) of the skiff, and below the deck on that end. 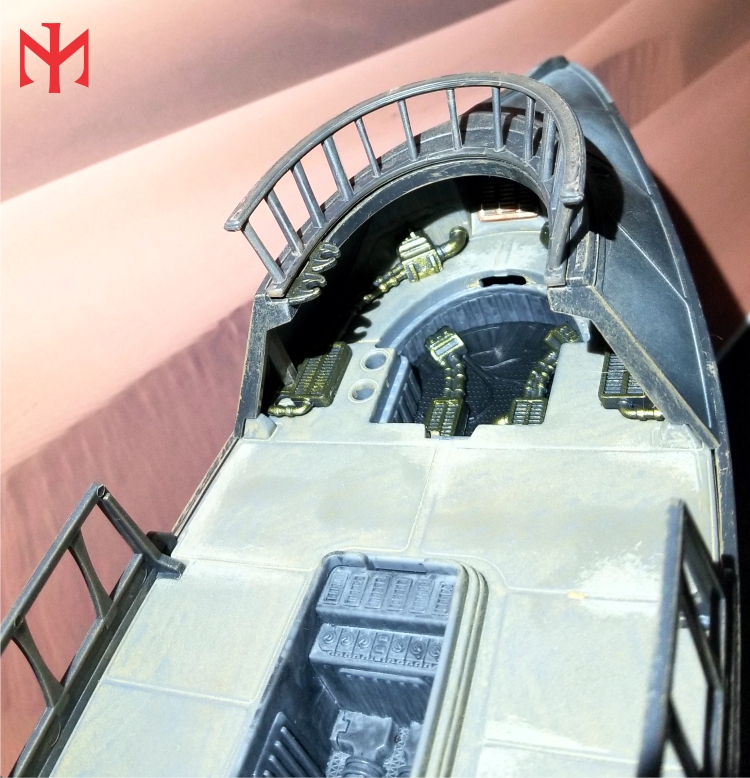 The starboard (right-side) railing can be exchanged with a damaged version of itself, from which hangs a torn cable, from which you could dangle Lando or any figure of your choice. 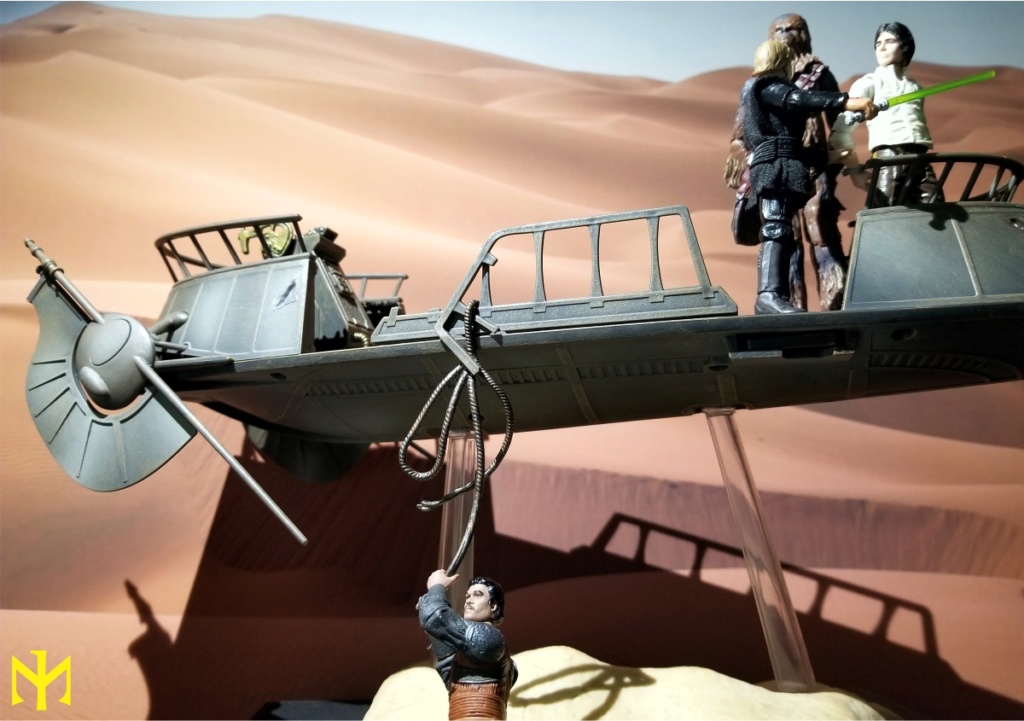 For more interactive functionality, you could store various weapons (especially vibro axes) in specially provided compartments within the stern and the bow of the skiff, or inside the storage compartment running along the center of the deck. None of the ones illustrated below came included with the set. 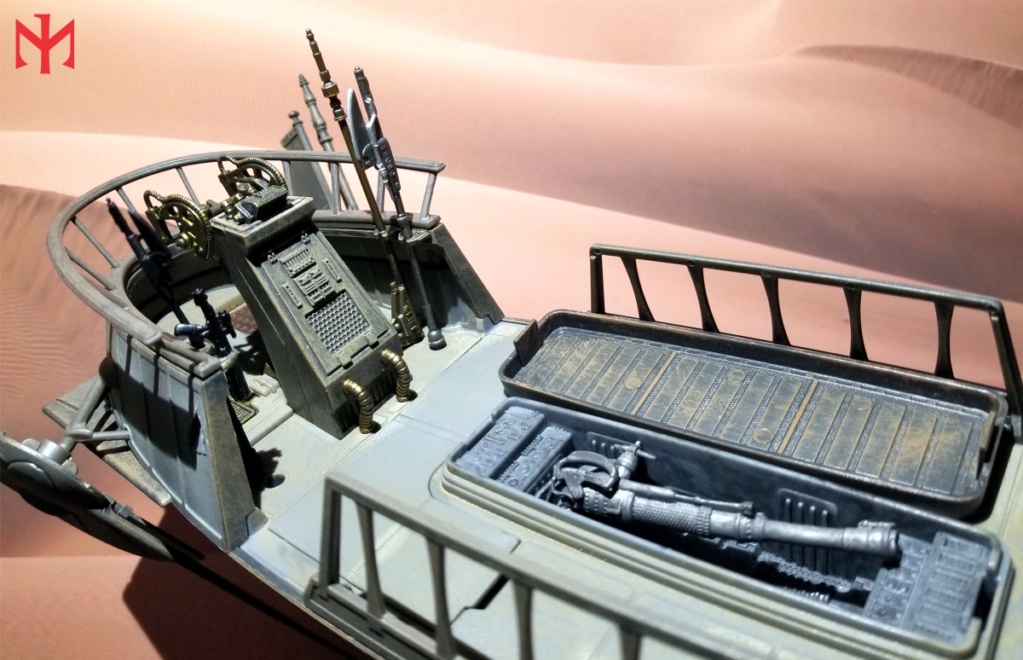 In terms of articulation, the whole skiff can be made to lean left or right because it is attached to the stand by rotating elements that can turn accordingly. The two-part vanes are also fully articulated. You can rotate them completely around their axis and also at an angle to it, and the fans of the vanes can be moved at an angle to their heads (if that is the term). The skiff can fit all the appropriate figures (in this instance with two substitutes) easily enough, but since it does not have pegs for the feet, you would have a hard time keeping them aboard if you tilt the skiff. 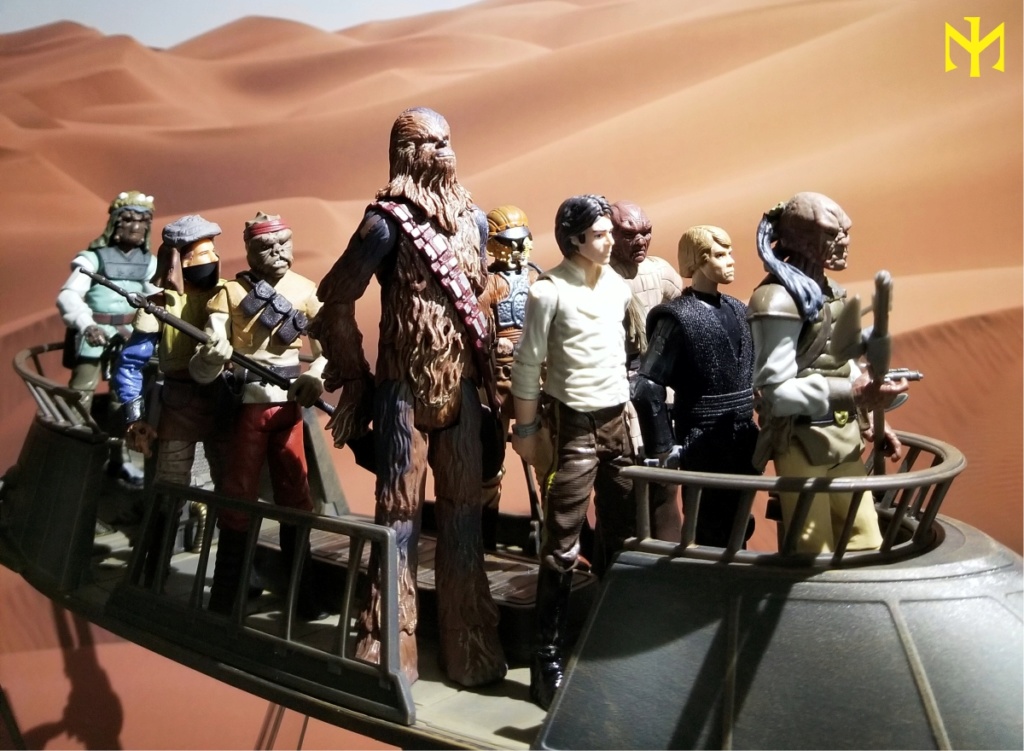 Hasbro has produced action figures for all but one (the bandit-scarved human) of the characters that belong on the "hero" or "prisoner" skiff, and I am yet to get the pilot, a Nikto called Vedain. I figured that another Nikto, a skiff guard from the other skiff, would make do as a substitute. 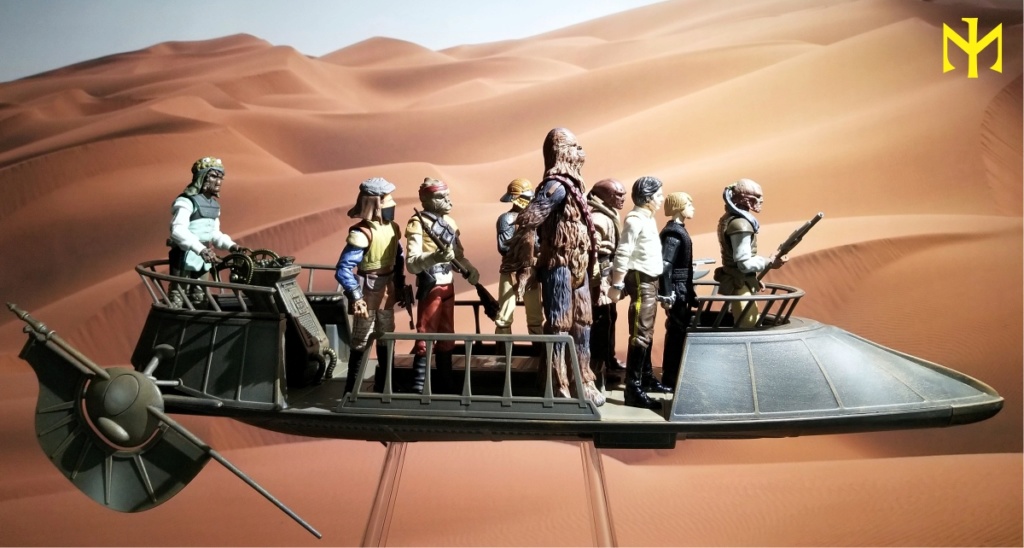 If specieist fans and executives could be ignored (apparently the dogma is that human characters are inherently worthless compared to "cool" or "lame" aliens alike), it would have made sense to add the missing figure to the skiff set -- if Hasbro felt that it would not sell well on its own. 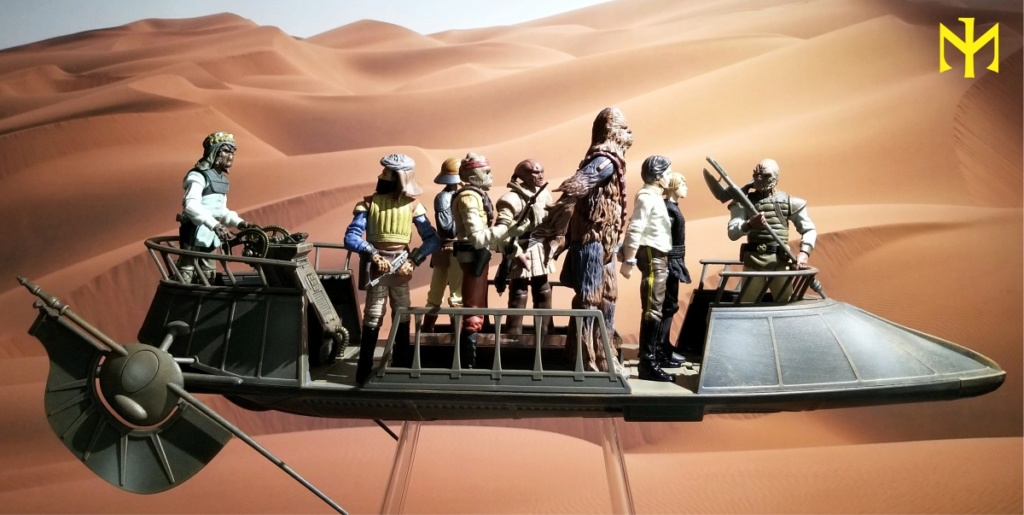 And don't worry, the gangplank is extendable, ready to serve for cargo loading and impromptu executions alike. Or at least they could try. Note that this (starboard = right) side of the skiff has all the sculpted damage, while both sides have weathering -- this is apparently because it is this side of the skiff that gets fired upon from the sail barge in the film. Speaking of which, perhaps to simplify filming this, in some of the earlier shots in the film the image was mirrored (look at Chewbacca's bandolier and Han's shirt lapel) and I reproduced this trick in my photos (compare the one above to the one below). 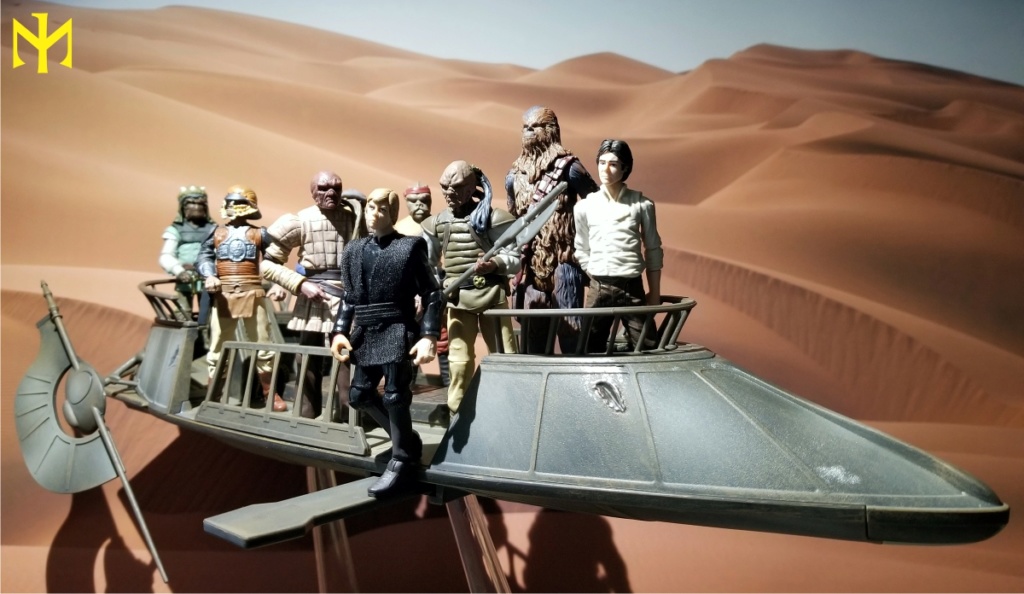 I could not justify spending the money on the Khetanna HasLab set, but this one was a no-brainer to get. I am very pleased with it, with its capacity, and with its details. It is convincing, realistic, interactive, and useful all at once. If Hasbro had come closer to filling out the ranks of the skiff guards on the other skiff (it has made two or three of them, depending how you count), I would have gotten a second set.

Hope this has been useful. What do you think?

Where to buy? Try Walmart, Amazon, or eBay (though that last option might be overpriced). The skiff sells for about $40 USD, at least on Amazon, from where I got mine.

Entertainment Earth has it for $40