With the release of Zuckuss, appropriately as the runt of the litter, Hasbro's 6-inch Black Series Bounty Hunters set is now complete. All six figures have advanced articulation, good proportions, and very good detail. 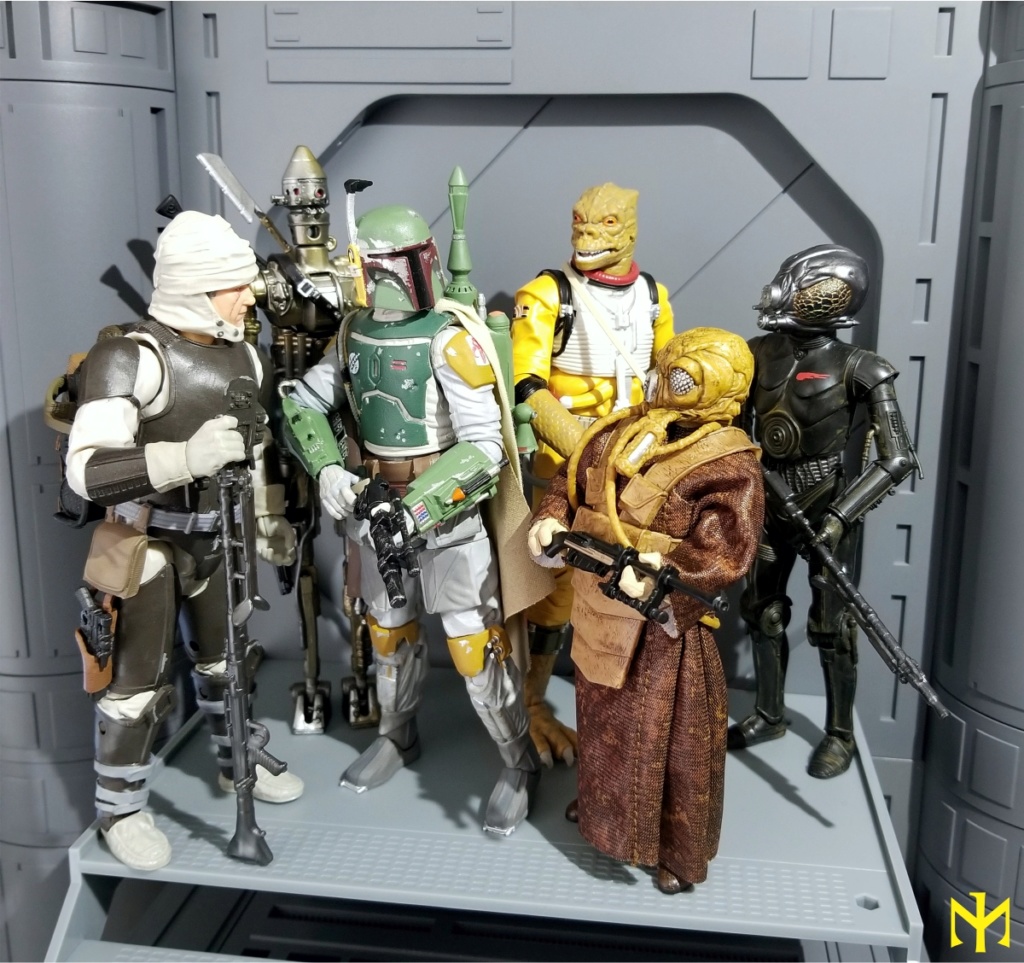 The most recent release, Zuckuss, is appropriately given the shortest stature among these figures (13 cm = just over 5 inches), and, also appropriately, has the most extensive use of soft goods for his coat. The fabric is of a slightly shiny kind that perhaps helps evoke leather, although if you look closely enough you will notice the texture. At any rate, it looks reasonably accurate and does not hinder the articulation, not that this is the most animated of characters (and I can't say I'm crazy about the seams). The other leather and metal elements are sculpted in soft plastic and painted appropriately. The eyes are painted silverish (with a darker wash) like the metal, but although this is not quite as cool as Sideshow's sixth-scale translucent eyes, it works very well visually. There is some color detail but no weathering on the gun. I can't tell whether there is an ab crunch, but otherwise the articulation is all good, except for the neck, which does not allow the head to look up or down enough for my taste.

Sidenotes: I was looking up something else and came across the following information which I couldn't resist sharing... Zuckuss was originally named Tuckuss (as in tuches, buttocks)!; and his eyes were bubble wrap (and lest we forget it, that was originally intended as wallpaper)! 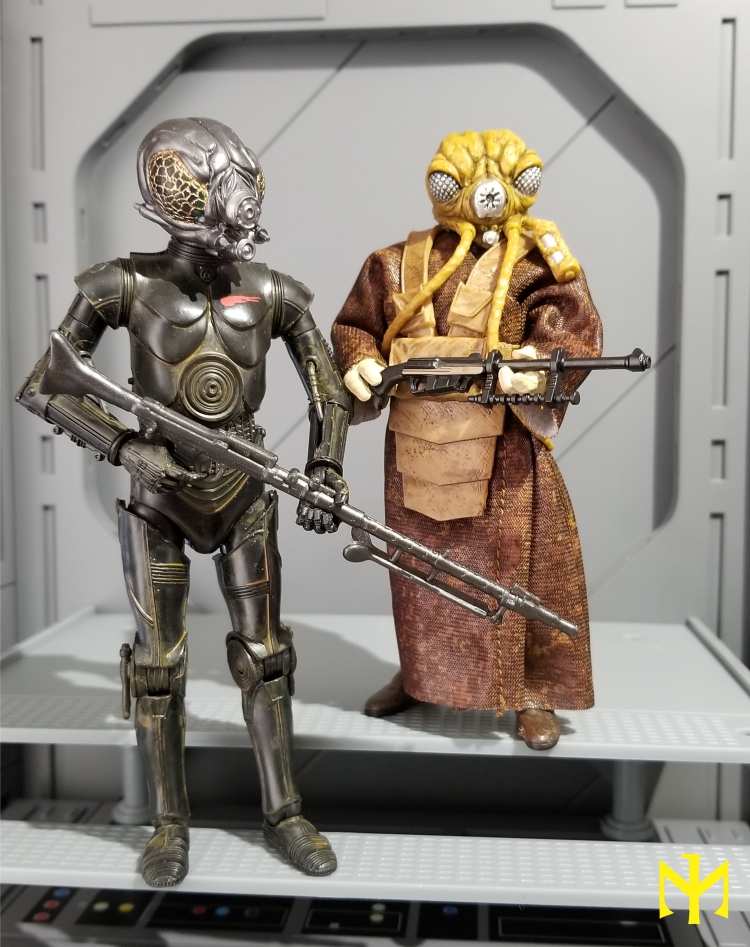 4-LOM was one of the first of these figures to appear, and is excellent in pretty much every way, comparing very well with the Sideshow sixth-scale version despite the disparity in size. He stands about 14.5 cm = 5.75 inches. The lean android body is sculpted and painted perfectly, and given a bit of rusty weathering (except for the somewhat too pristine ab section with the exposed wiring). Although the eyes don't have the very cool translucent crushed glass effect we got with the larger Sideshow versions, the metallic paint and wash applied on them produces as excellent look. The elbow and neck joints work remarkably well and the articulation is just as it should be -- even including the annoyingly restricted degree of movement at the hips which seems to be part of the design (shared by C-3PO); like other robots, the knee is single-jointed but works well. There is an ab crunch, but little lateral movement in that area. The weapon is painted in a metallic color that helps approximate a realistic, almost weathered look. 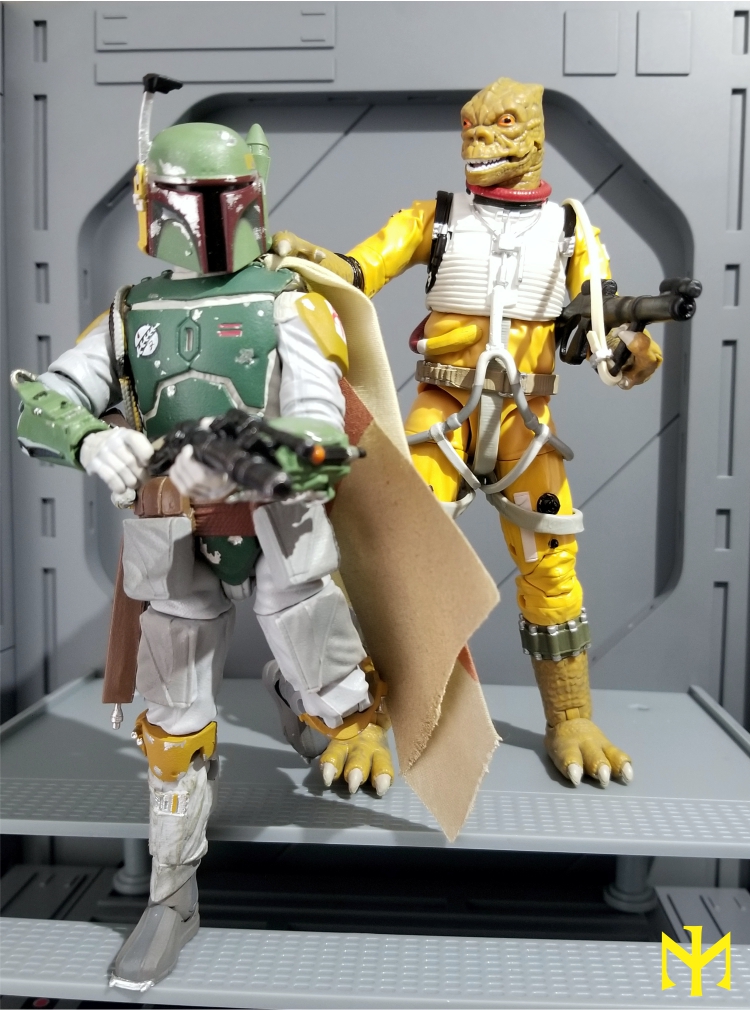 Bossk stands tall and proud, at 16 cm = almost 6.5 inches. As with the first Sideshow sixth-scale release of this character, the head sculpt is arguably more refined and "attractive" than the actual mask seen in the film (Sideshow later produced a second, more movie-accurate version). The figure features a movable jaw, which is very cool in concept, though not quite excellent in the way it actually works. The complex wiring and tubing on the space suit is well executed, as is the paint job, although in both cases finer detail might have been an improvement. The articulation is good, but not perfect: there is no ab crunch (though there is lateral movement in the area) and the creature design makes it difficult to bend the elbows beyond 45 degrees. The weapon has a simple paint application that does not contribute to its realism, but its soft plastic strap can be adjusted and works reasonably well. 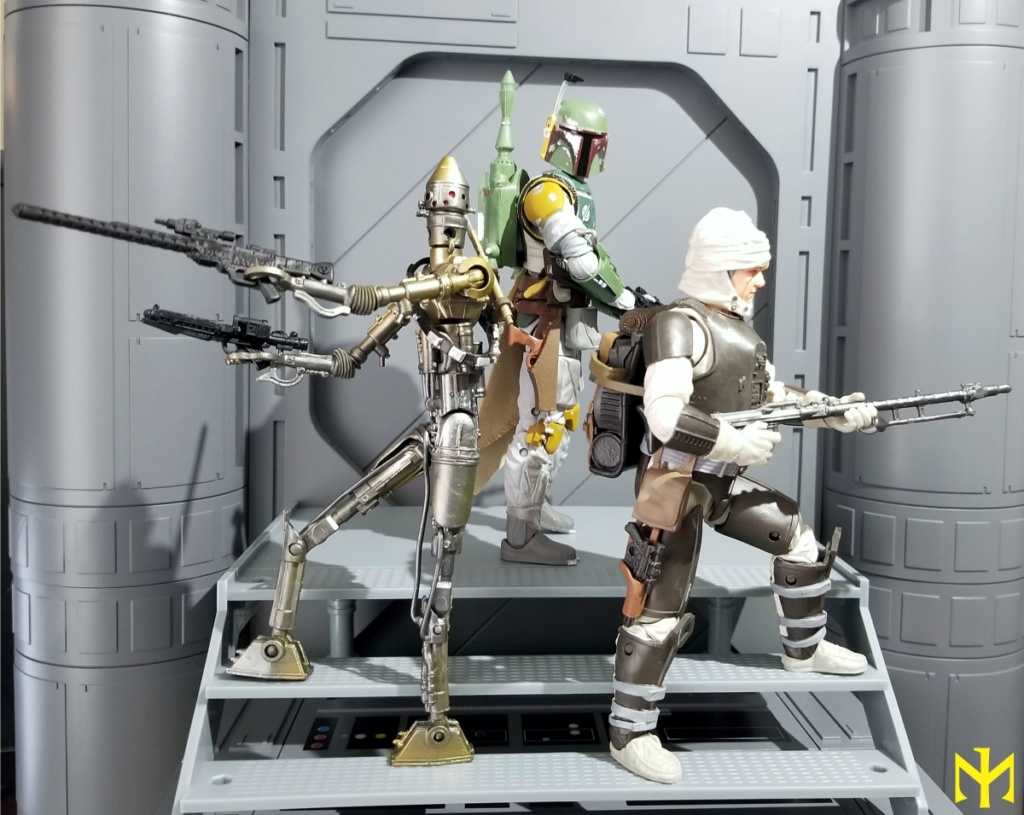 Boba Fett, everyone's favorite overhyped badass, stands about 15.5 cm = just over 6 inches, not counting the raised rangefinder or the tip of the rocket pack. The figure has a pretty realistic paint job, including a number of scratches and dents reproduced in reasonable, though not infinitely fine detail. The articulation is excellent in theory, but in practice restricted by the hard plastic belt and pouches, which get in the way of ideal ab and upper thigh movement. The rangefinder is not articulated. The figure comes with a pistol and a gun; the former has a two-color paint job and fits snugly in the holster, while the latter is painted in three different colors and features some weathering towards the front portion. The rocket pack can be removed from the figure's back. The soft goods "cape" hanging from the left shoulder is a disappointment: although I don't mind soft goods at all, in this instance it is just far too stiff and plain to look right, and the choice of fabric and its treatment were not very successful. 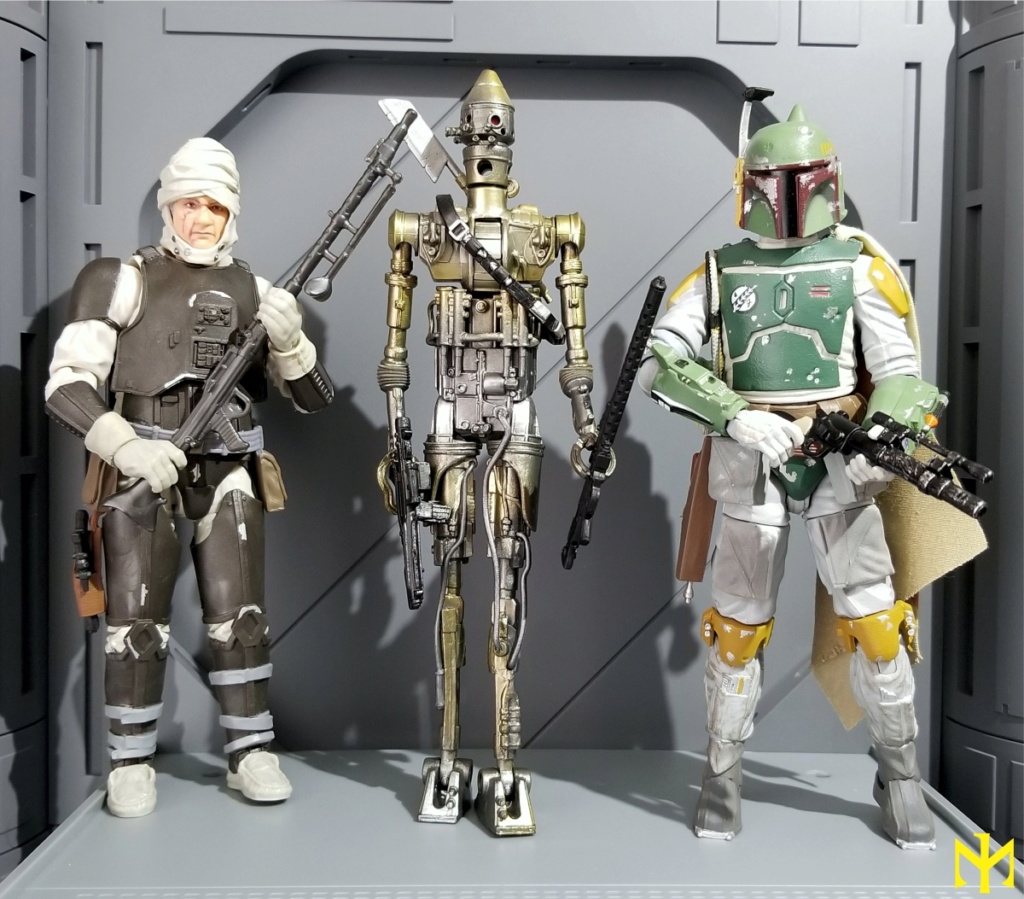 IG-88 is appropriately the tallest figure, standing at 17 cm = over 6.5 inches. The figure is given an appropriate metallic grey paint, with some areas perhaps overly picked out in an oily yellowish wash. I noticed some extra paint bleed from the small silverish boxes and other elements onto the dark leather bandolier across the chest. The level of sculpting detail is reasonably fine on both the figure and the bandolier (including two mines or granades attached on the back side). Except for the limitations already inherent in the robotic design, the articulation is very good. The height of the figure makes it a little hard to balance. Faithful to the appearance of the character in the film, the elbows are covered by a soft-plastic harmonica-like component, which does not impede the articulation of this area much. IG-88 comes with three weapons: a long rifle, a "standard" imperial blaster rifle, and an axe. The long rifle and the axe can be attached to the back of the bandolier.

Sidenotes: apparently on the movie set IG-88 was bolted down to the floor to make sure he doesn't topple over. 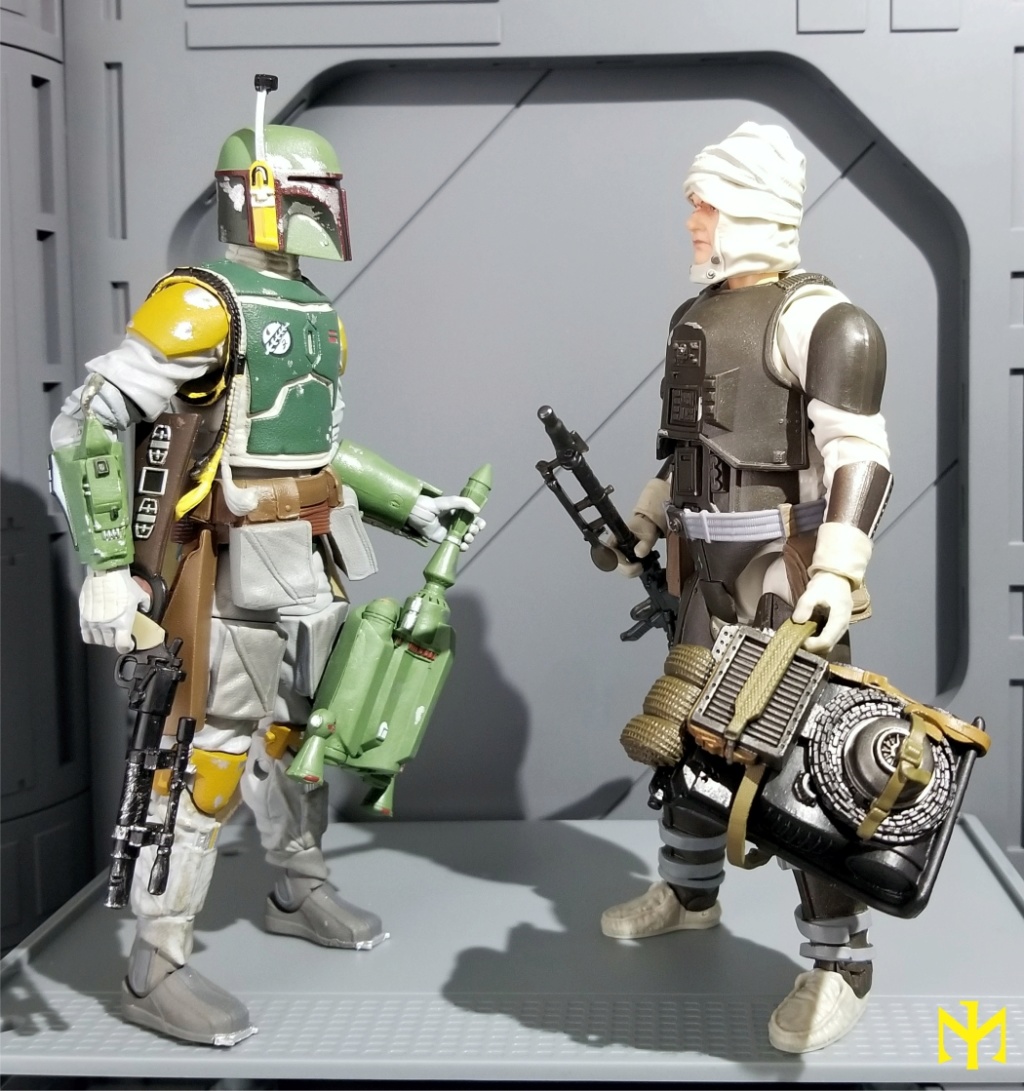 Dengar stands just over 15 cm = 6 inches. He is the only Bounty Hunter with a visible human face, which is reproduced in decent detail, with wrinkles and scars. The paint job is quite good (given that it is not a very exciting color scheme), although the silverish weathering detail could have been more fine. The articulation is perfect, for once uninhibited by the costume and armor. However, the heavy removable backpack makes it difficult to stand the figure easily. Like his confrere Boba Fett, Dengar sports two weapons: a small pistol that fits in the holster and a long blaster rifle. This last piece is the same as 4-LOM's but given a duller paint job. It happens to be movie-inaccurate, but the choice was inspired presumably by set photos of the Dengar actor in character fooling around with 4-LOM's rifle. 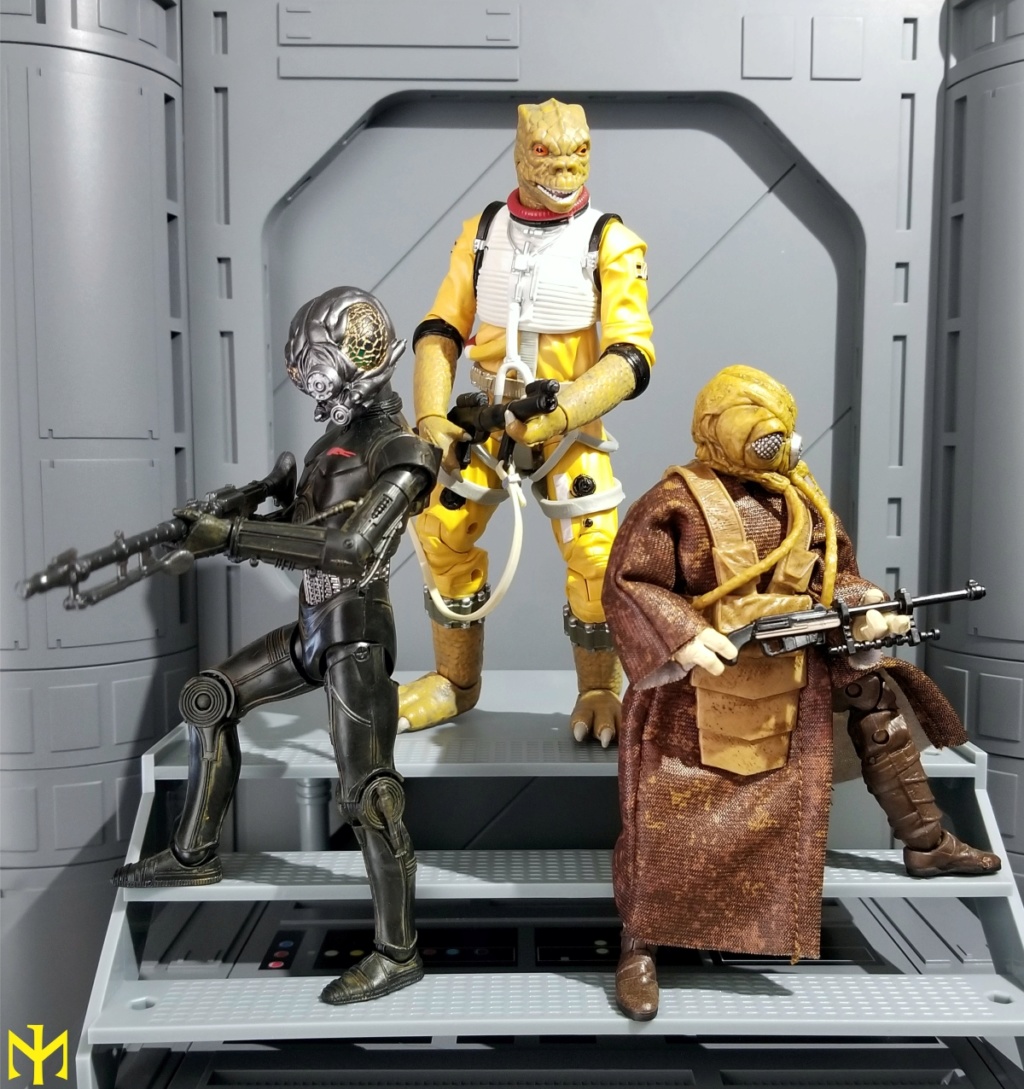 As mentioned above, Boba Fett's rocket pack and Dengar's backpack are removable, which should give you more possibilities if you want to depart from the canon look. In both cases (but especially Dengar's), removing these accessories makes it easier to have the figures stand on their own. 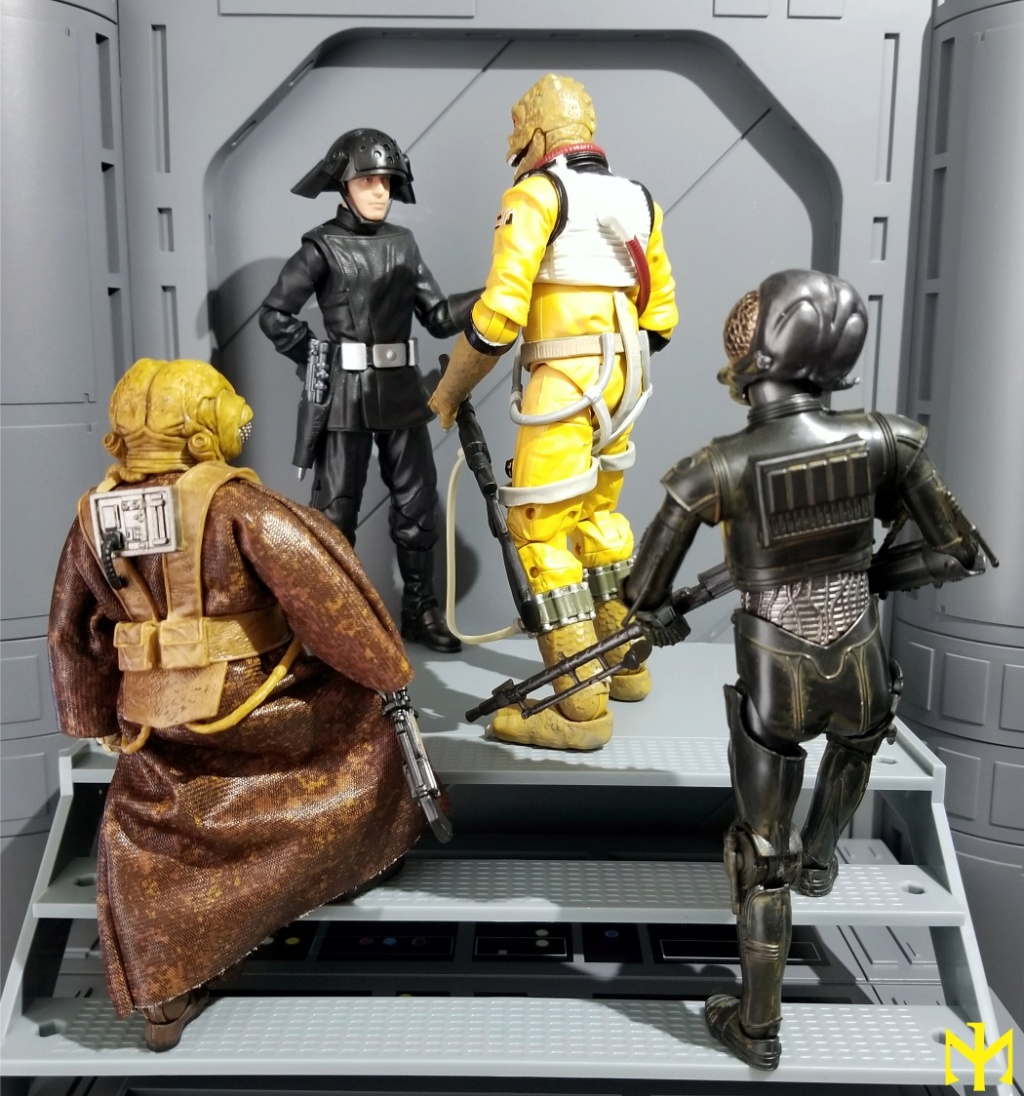 Overall, I am quite happy with Hasbro's 6 inch Bounty Hunters and am glad I picked all of them up over the last several months. Now the gang's all here. 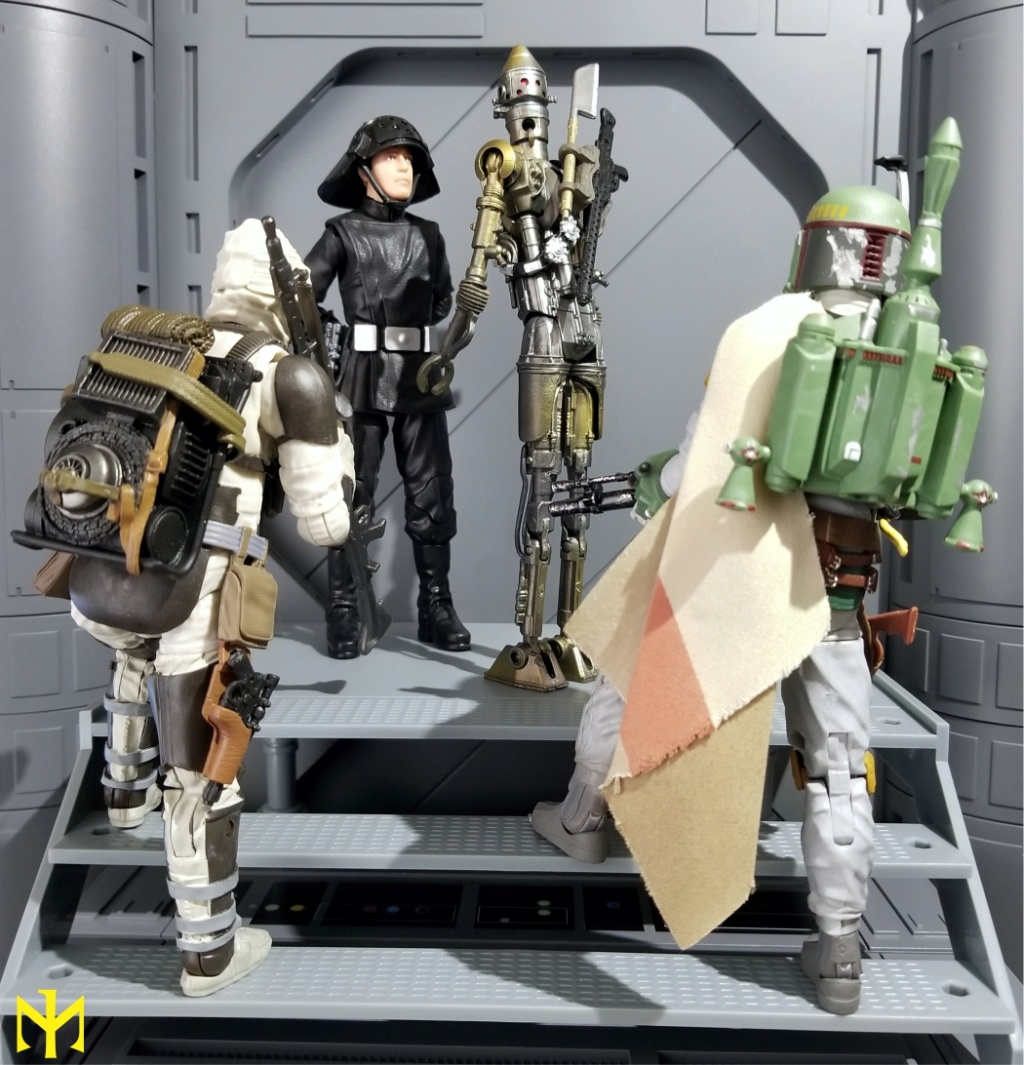 I hope this has been useful and/or informative. What do you think?