Posts : 796
Join date : 2018-04-06
Age : 39
Location : stuck in the 90's
I thought it could be useful for customizers as I mentioned the "green stuff" modeling paste in another topic, here is how I often use it to modify existing figures (my skills are not high enough to properly sculpt yet lol)

That was long before hasbro finally released an official version of the "Dengar" character from the star wars universe, so I created one using a snowtrooper as a base (since both are wearing the same armor plates...)

Here are a few shots taken during the process... 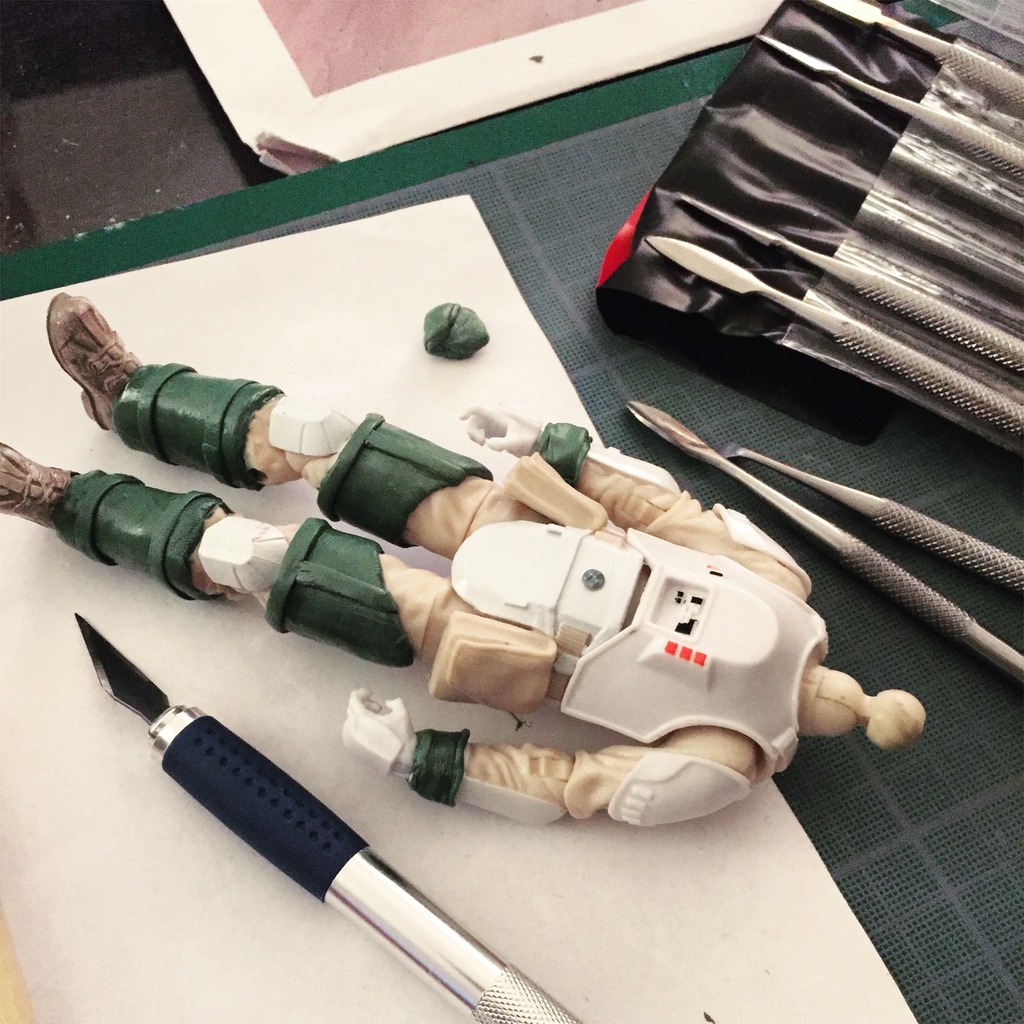 The green stuff is a very simple bi component resin, that you can find in ribbons or in sticks, the ribbon is very user friendly cause you just cut it to the needed length, the two colors are stuck together so you don't have to worry about proportions.

The process itself is quite simple you just have to mix it in your hands, no protection is required, it's as smooth as kid's "play doh" and turns into a dark green modeling paste that will take about an hour to dry (so better not mix a ton of it and proceed bit after bit, or some it could be lost from drying before it's sculpted)

Once mixed the paste has a very chewing gum texture, some people like to let it dry 4-5 minutes before sculpting so it's a bit less sticky. A very good trick when modeling with green stuff is to keep a glass of water nearby, to dip modeling tools or just your fingers, it helps a lot to shape the paste without sticking to it (for example it prevents from leaving fingerprints everywhere on it)

After an hour the green stuff will get totally dry, still it keeps some elasticity with a shape memory so it's flexible but not fragile (in small quantities, a plain figure or headsculpt will become perfectly hard except fine details like ears or fingers that will keep a light flexibility ( a bit like hasbro's plastics, or the ones used for our 1/6 boots and hands)

after a first coat of paint: 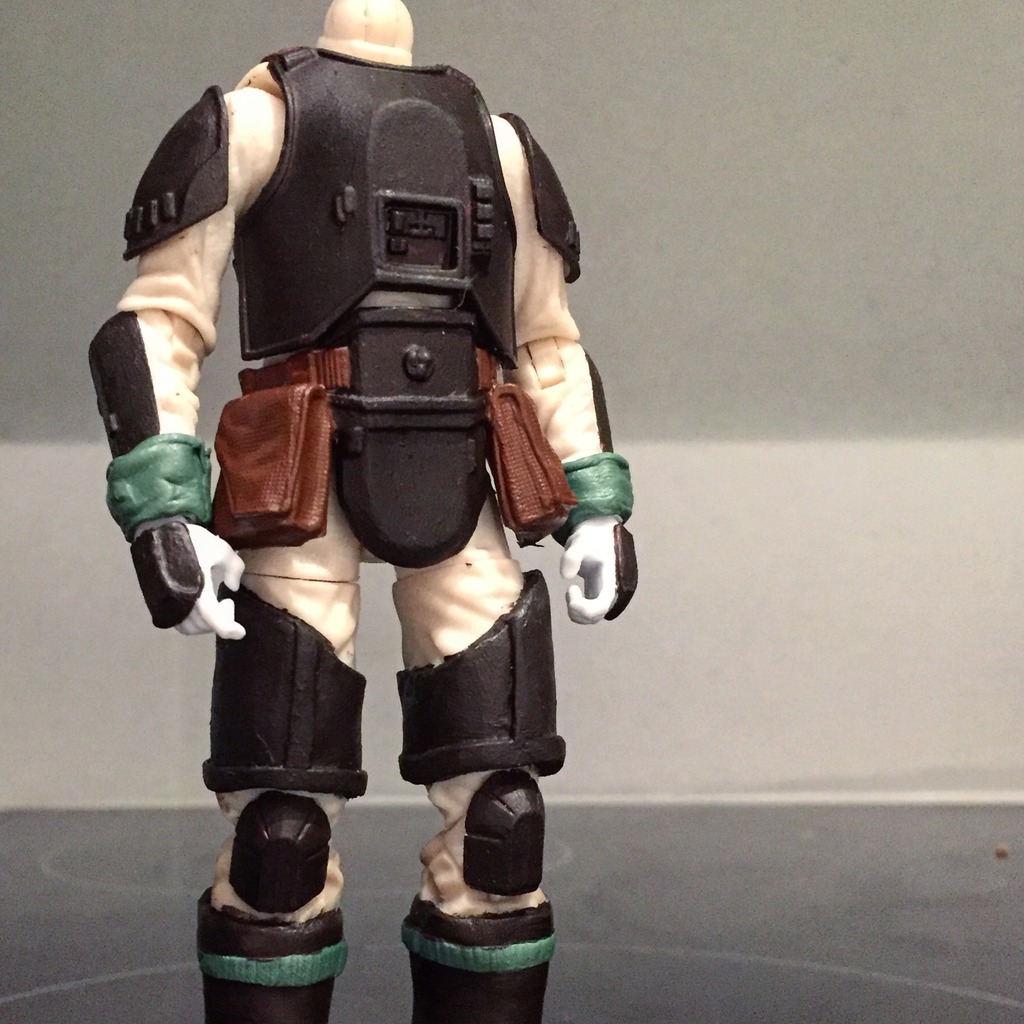 Another quality of that paste is it doesn't require primer coating, you can directly paint on it (a first coat is always better whatever the material is, but it's not as important as on clays or other modeling pastes that you need to cook)

mods on an existing headsculpt: 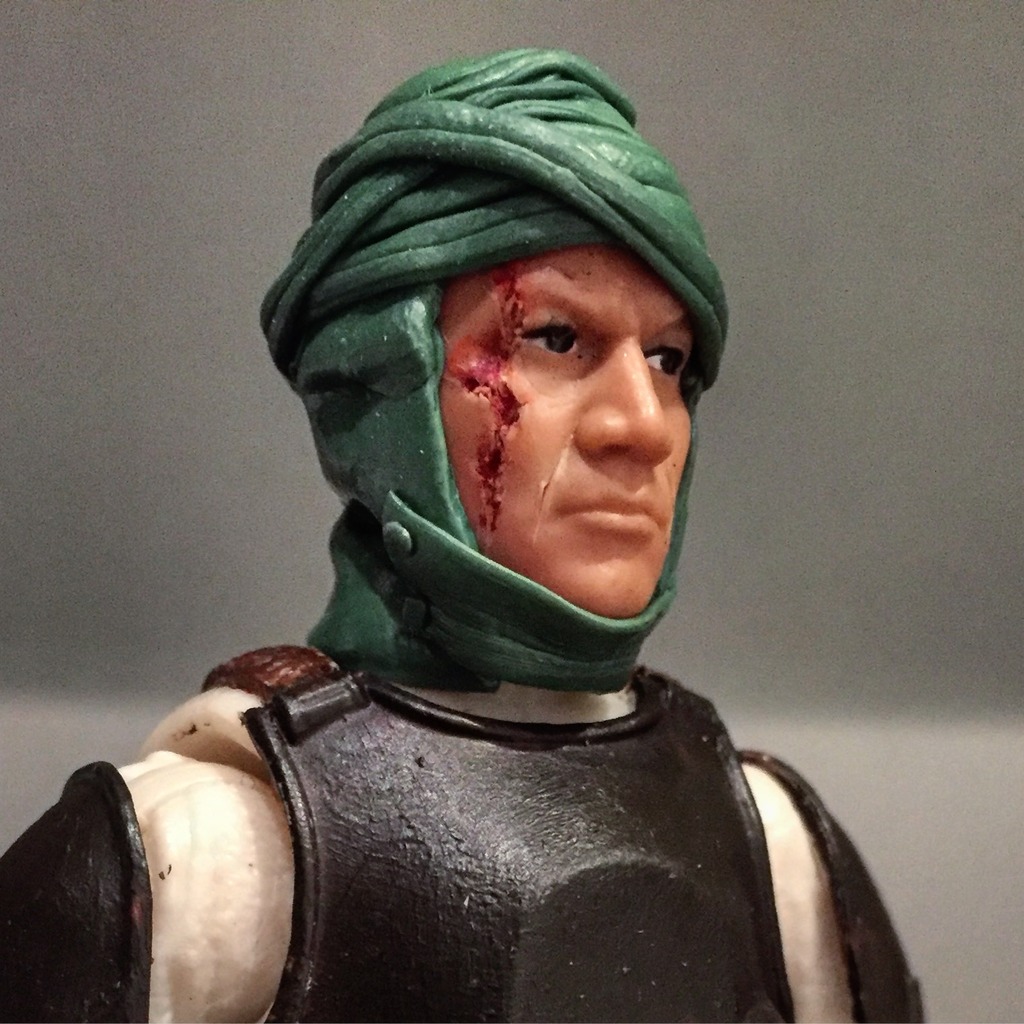 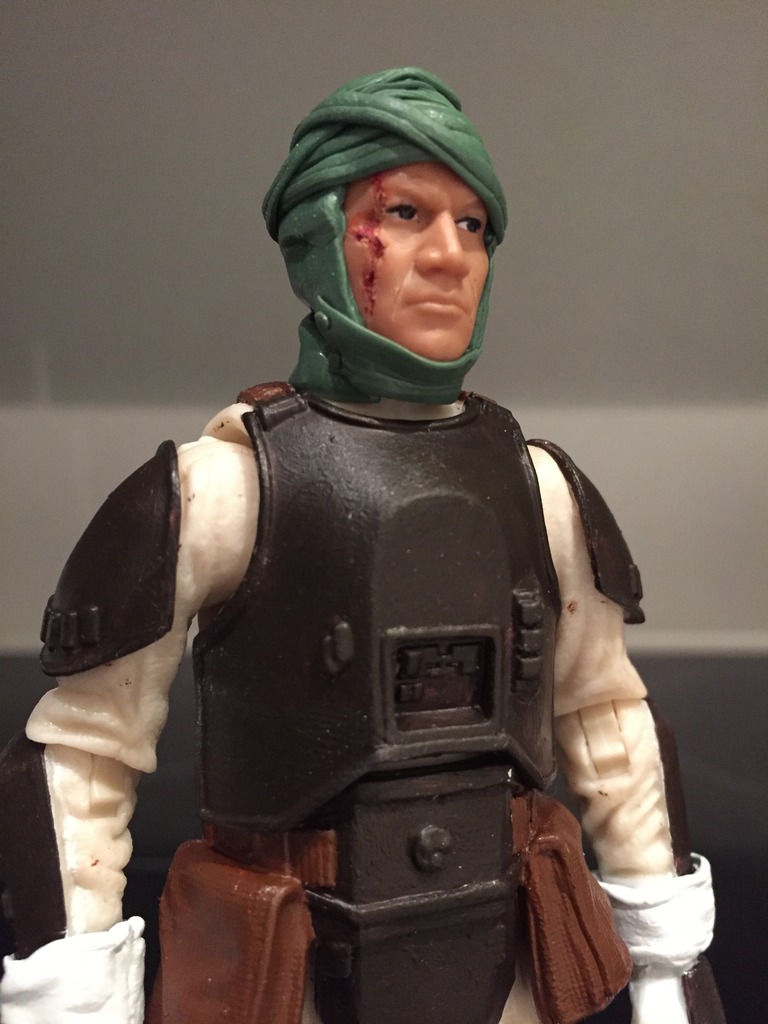 For that mod I just mixed a bit of green stuff and made it flat on a glass table with some water sprayed on it so it wouldn't stick to it at all. I let it dry for a few minutes (less than 10), then cut straps from it that wrapped around an existing head. the "sticky" apsect can be helpful when working on a existing item, it sticks on it, and with some water on tools or fingers it doesn't stick to them.

after the base paint: 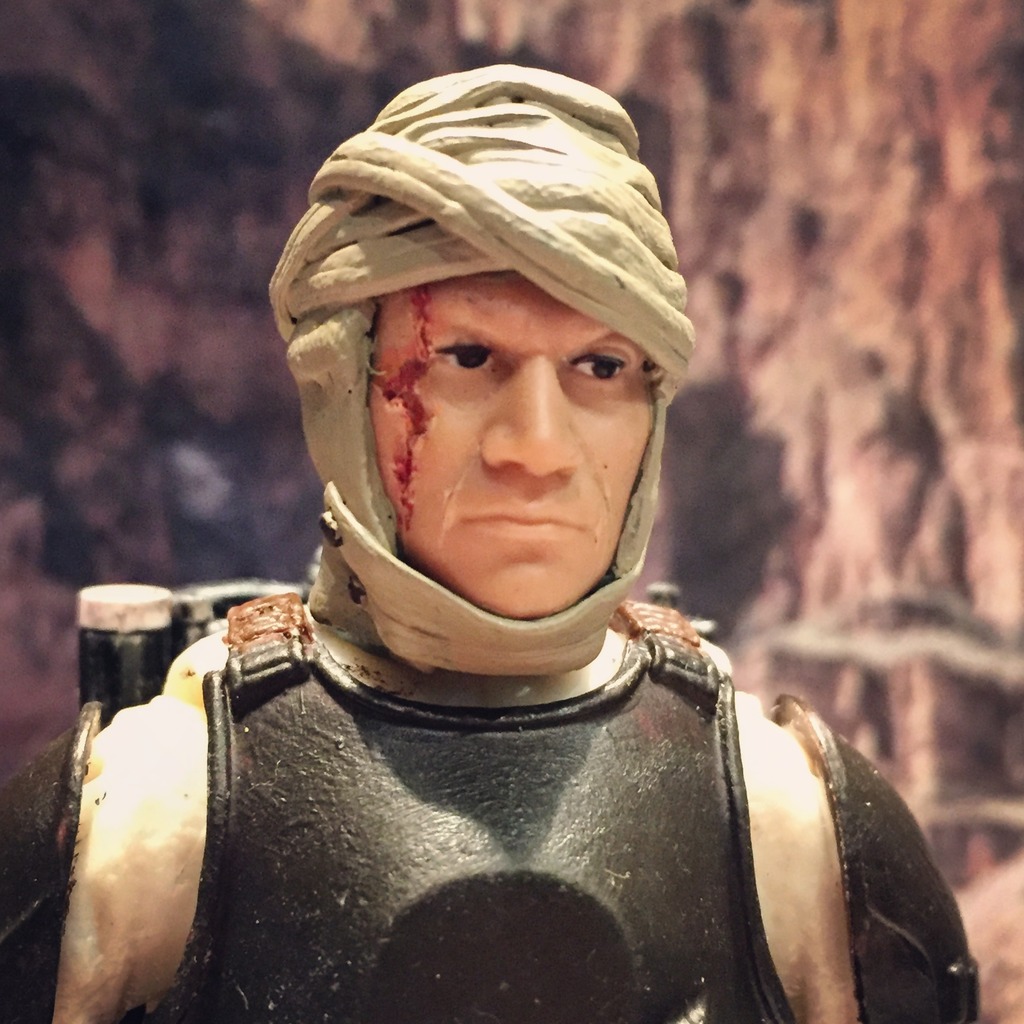 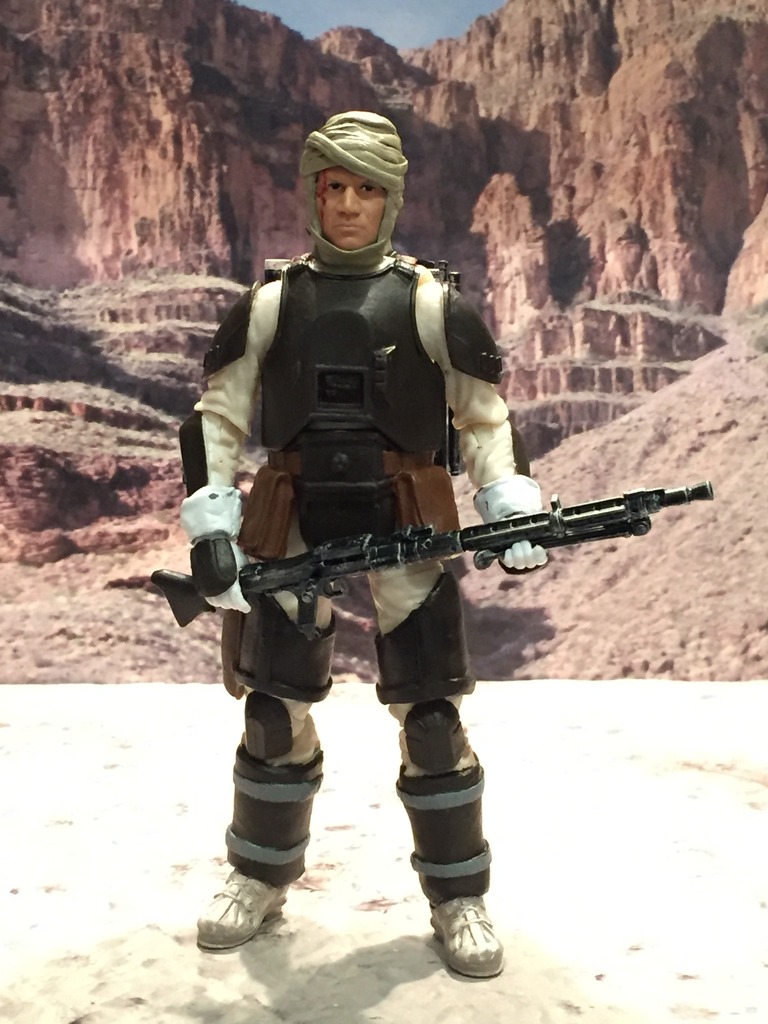 Hope this helps a little, there are much better tutorials on youtube about this paste as it very famous in the "warhammer" community for the fine details you can get out of it.

I personally find it very practical, easy to use even without sculpting tools. In our 1/6 area it can be very useful for sculpted hair, or any small accessory, especially the ones that would need to keep some elasticity, like wrist watches, shoes...

Posts : 3207
Join date : 2019-01-11
Location : the far, bright center
Wow, this is indeed extremely helpful! I had given up on trying to customize Black Series and Figuarts size figures because I found the prospect of having to sculpt so much of the clothing to be very daunting. Thanks for de-mystifying it a bit for me!

Posts : 3207
Join date : 2019-01-11
Location : the far, bright center
Regarding the 'green stuff'  -- I am trying to figure out if I could possibly modify an existing 1/6 vinyl headsculpt so that it is 'bald'. In order to do that, I'd need to cover the holes for the hair and resculpt the top of the head a bit -- do you think this substance would work for that? (Even if it ended up with a bit of a seam around the hairline it would not be the end of the world in this case, as the figure will be wearing a hood most of the time.)
_________________
"The happy ending of the fairy tale, the myth, and the divine comedy of the soul, is to be read,
not as a contradiction, but as a transcendence of the universal tragedy of man."
Focusing on the Prequels, Clone Wars, and Original Trilogy eras (NO 'sequels', thanks!)

And I think greenstuff will work perfectly well for making a 1/6 figure bald, young Skywalker.

Ovy wrote:Didn't know he was a custom when I saw him in your other thread, great work.

And I think greenstuff will work perfectly well for making a 1/6 figure bald, young Skywalker.

Thanks so much, I might just give it a try!

And I agree -- if I hadn't have seen it in this context, I would not have immediately thought it was a custom either. : )
_________________
"The happy ending of the fairy tale, the myth, and the divine comedy of the soul, is to be read,
not as a contradiction, but as a transcendence of the universal tragedy of man."
Focusing on the Prequels, Clone Wars, and Original Trilogy eras (NO 'sequels', thanks!)

Posts : 796
Join date : 2018-04-06
Age : 39
Location : stuck in the 90's
SOrry I missed your question, Yes I guess it would work pretty nicely! I did the opposite on my side, using a bald head from dam toys and adding sculpted hair to it in order to create "bronn" a side character from game of thrones, it worked very well