Tony Stark has faced numerous threats since becoming Iron Man, but all the money in the universe can’t bring peace of mind to this billionaire genius after the events Avengers: Infinity War. The invincible Iron Man must now team up with the remaining Avengers to avenge the fallen.

Today, Hot Toys is thrilled to officially present the 1/6th scale Iron Man Mark LXXXV collectible figure as the first masterpiece from the line-up inspired by this last exciting installment of The Infinity Saga.

Exquisitely crafted based on Tony Stark/Iron Man in Avengers: Endgame, the true-to-movie figure features two interchangeable head sculpts including a newly developed head sculpt with remarkable likeness and an interchangeable helmeted head with LED-light up function, intricate design of the Iron Man armor has been faithfully reproduced with red, gold and charcoal grey coloring painted carefully with a metallic appearance, LED light-up functions scattered throughout the upper body, back and Arc Reactor on chest, Nano Lightning Refocuser attachable to the back, multiple pairs of interchangeable hands for iconic gestures, character themed figure stand with movie logo.

Last but not least, additional accessories will be coming soon! Fans will surely be amazed by the Iron Man Mark LXXXV collectible figure with its brand new suit and Nano-tech inspired accessories, stay tuned!

**Prototype shown is not final, pending licensor and talent approval.
**Battery included for collectible figure, button cells are required.
**Product details could be subjected to change without further notice. 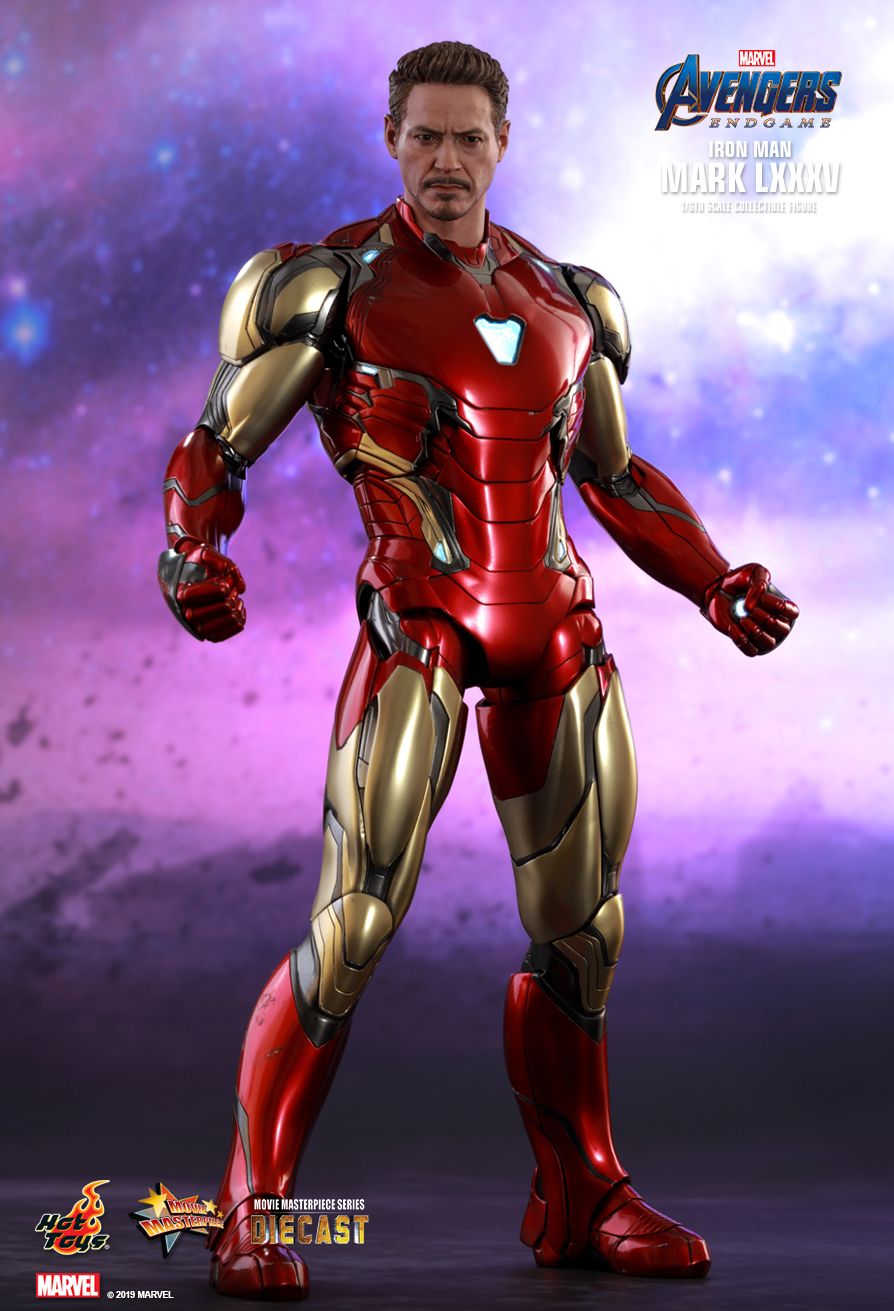 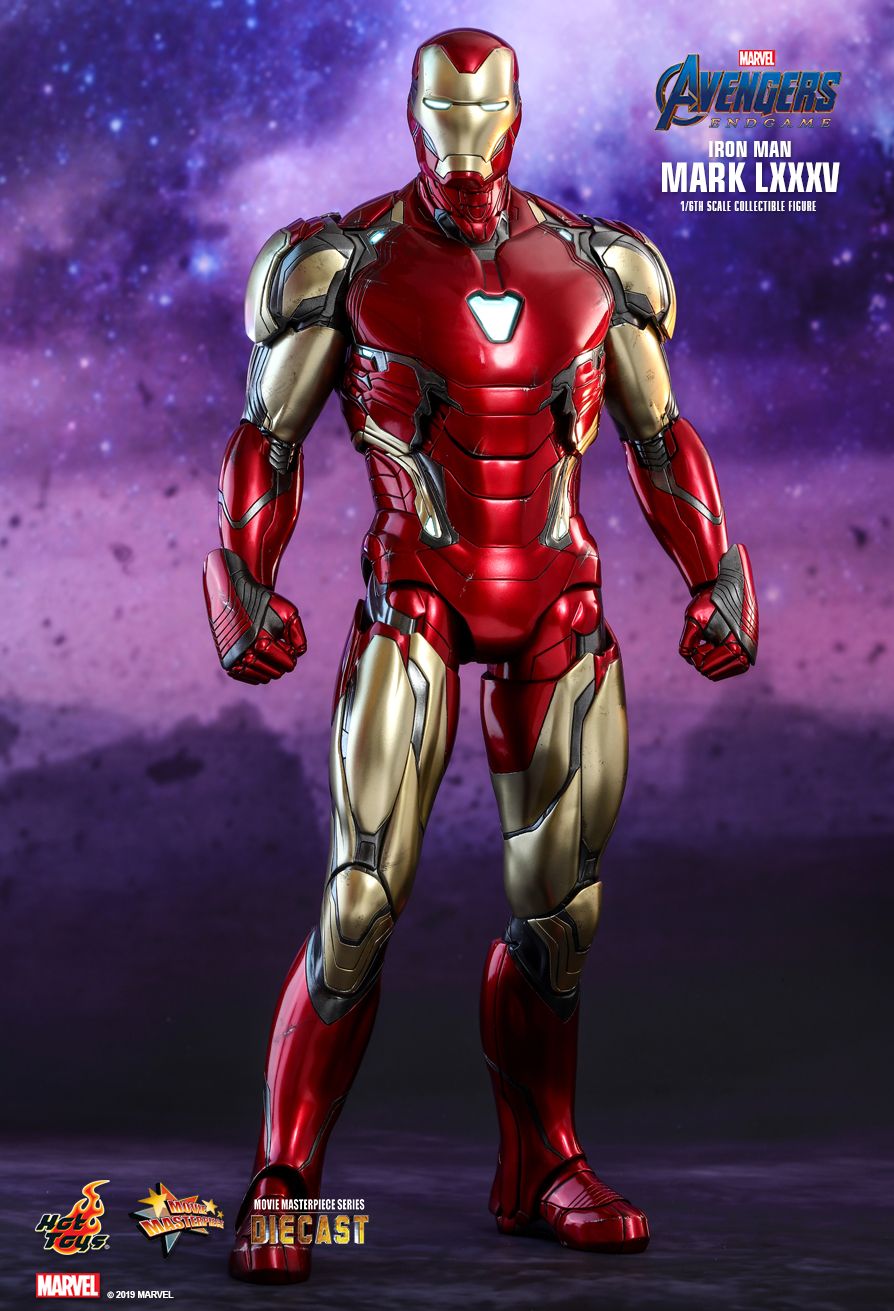 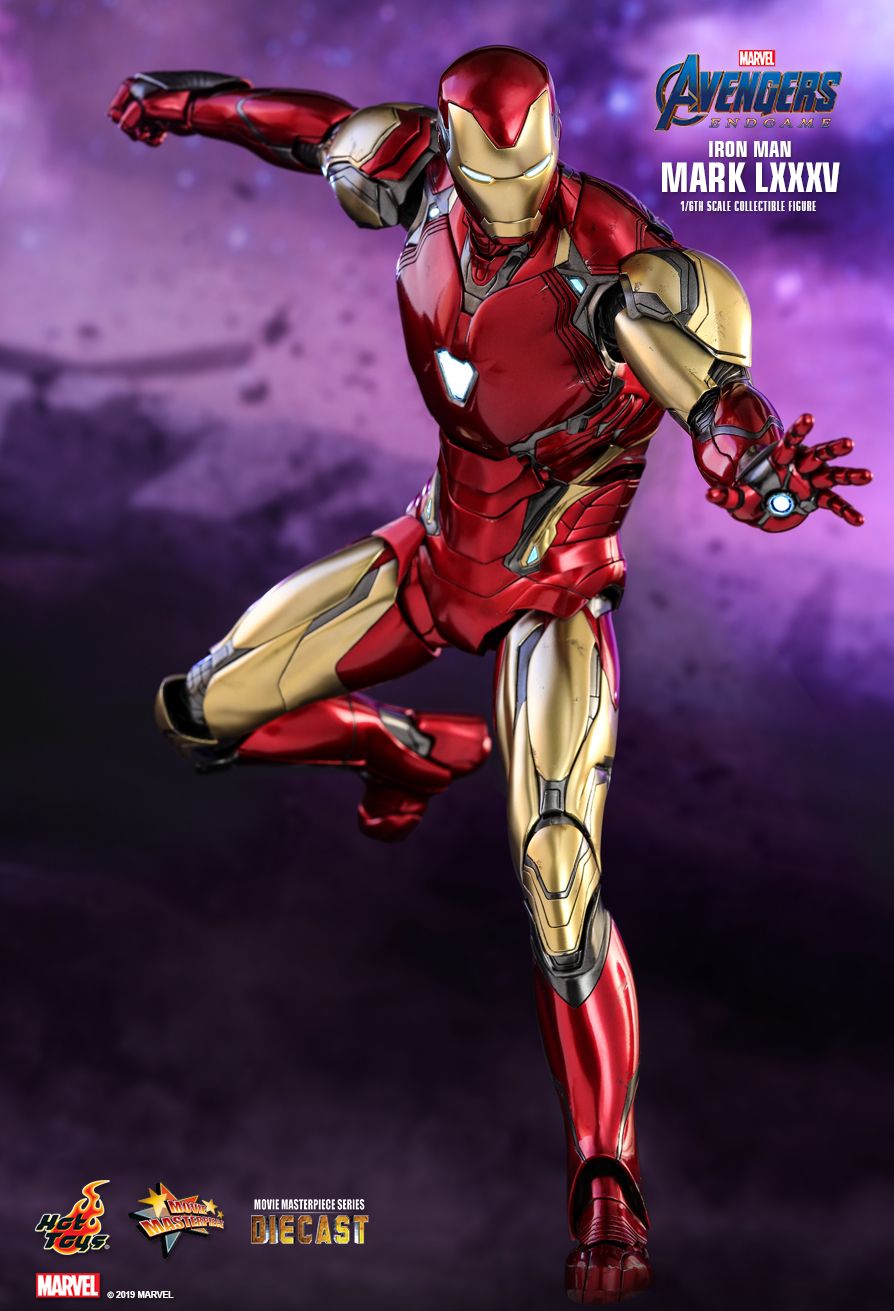 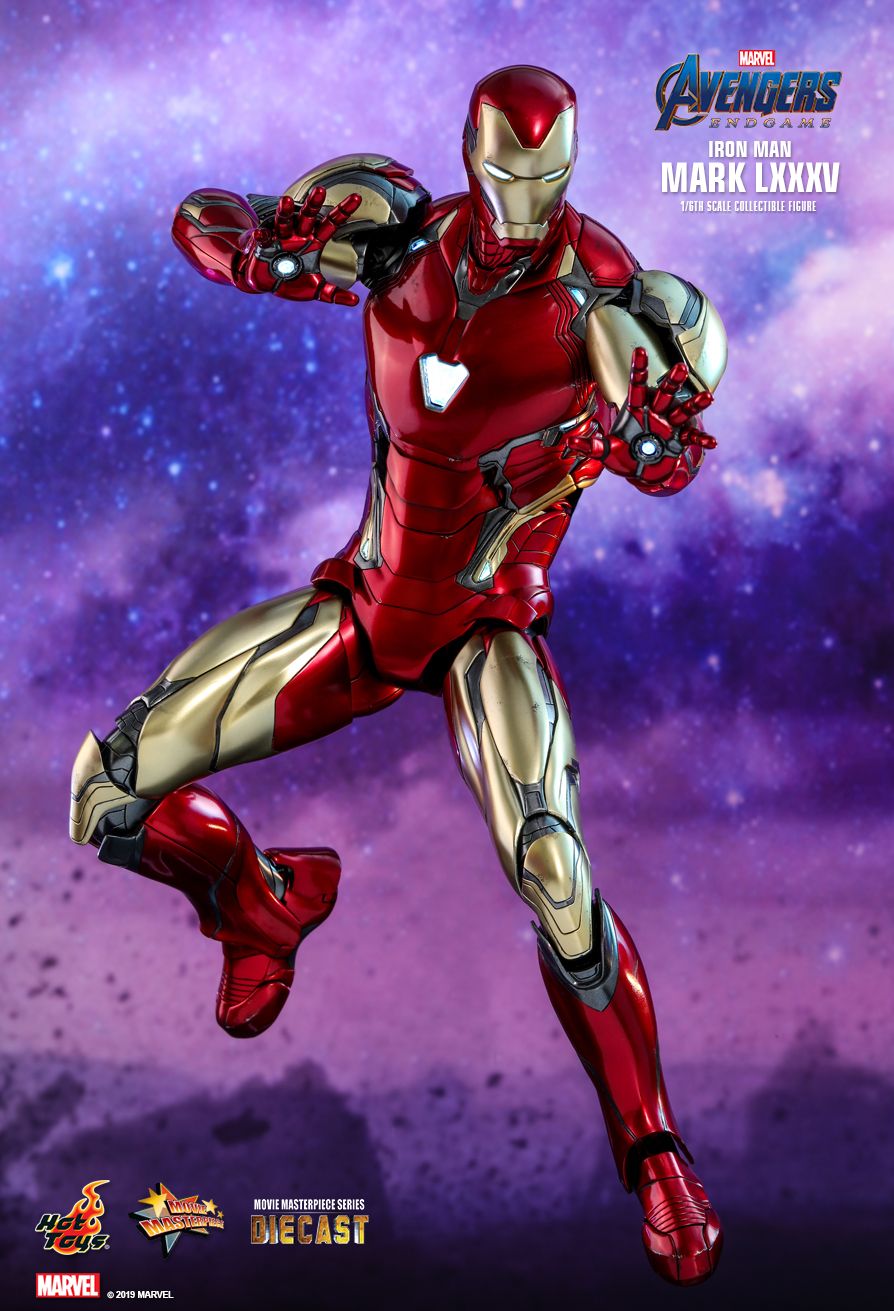 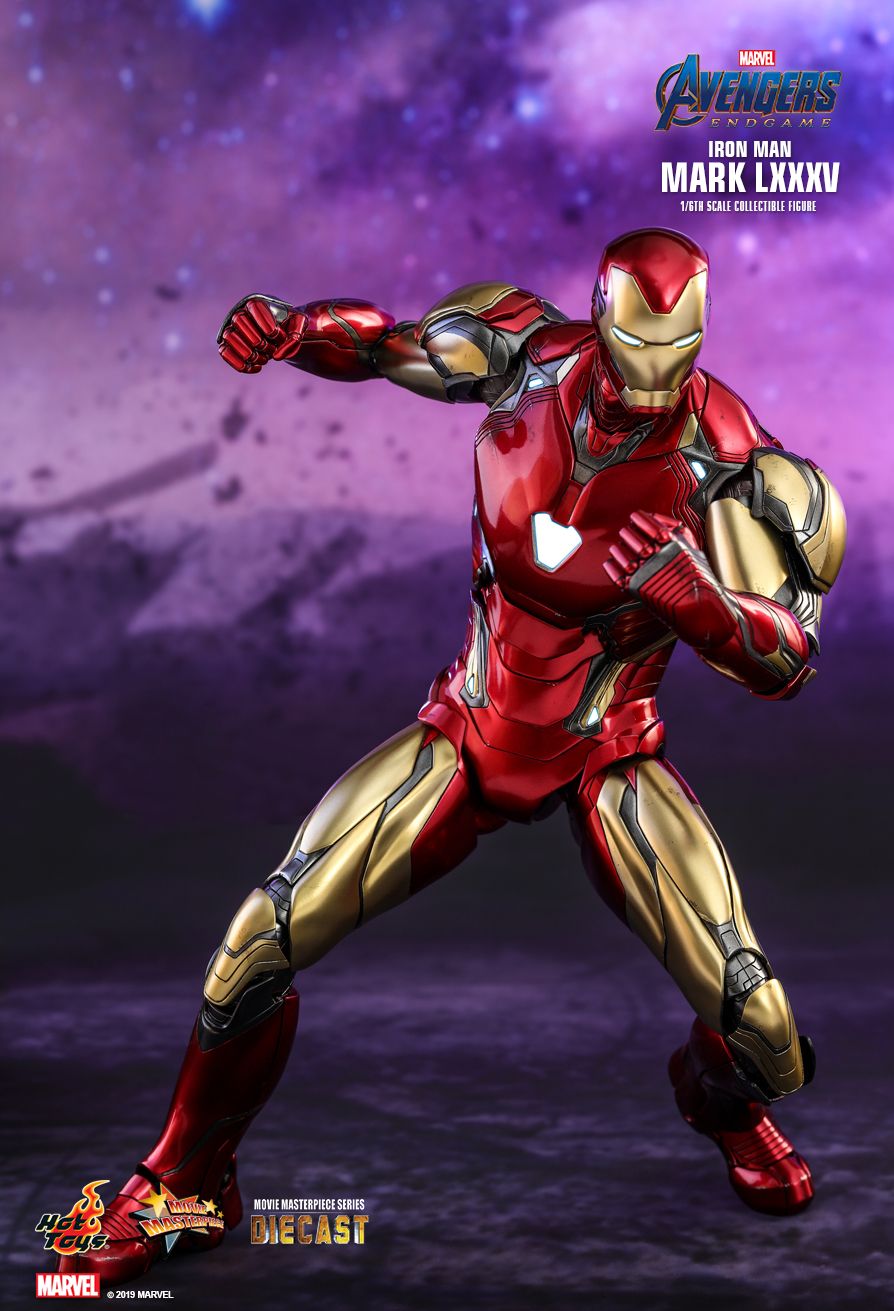 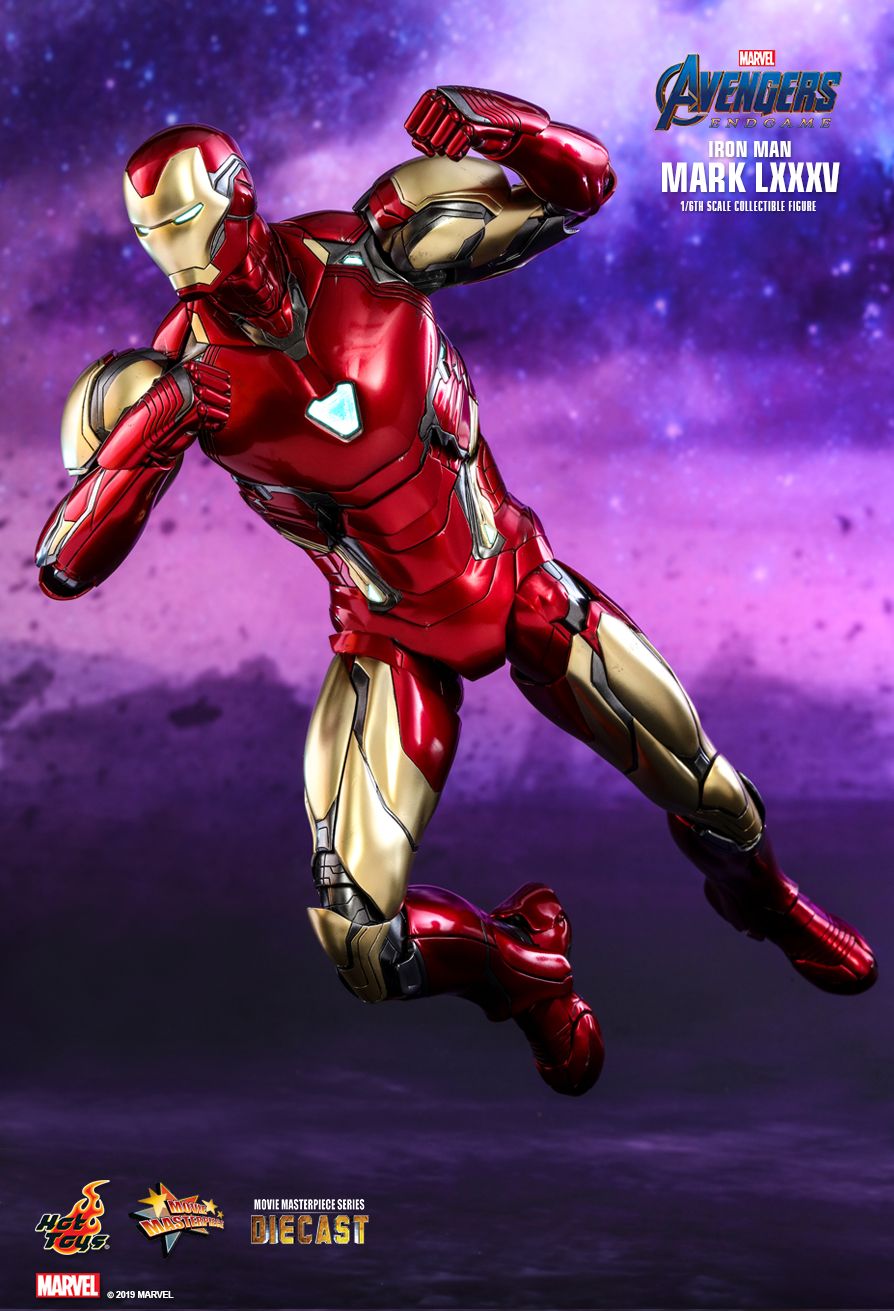 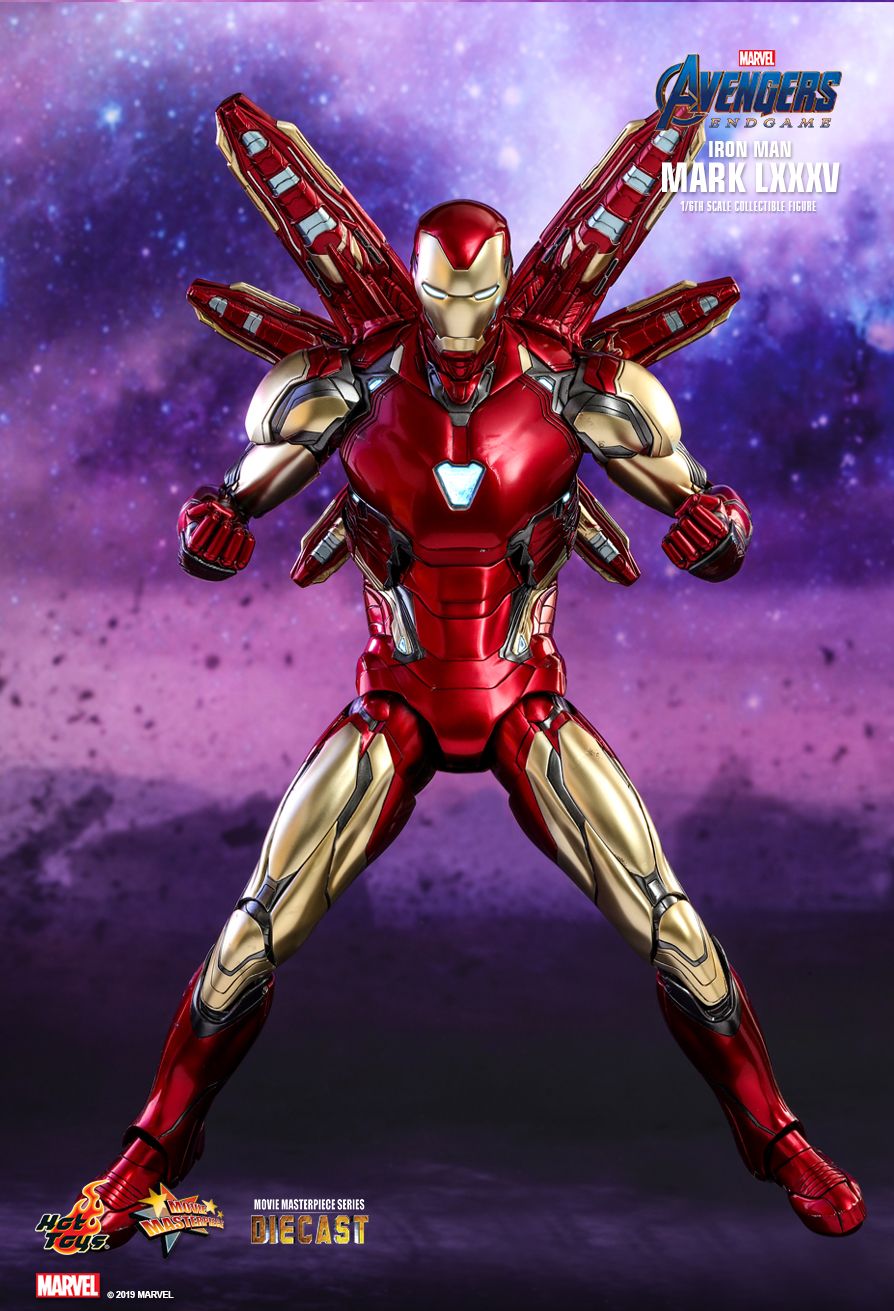 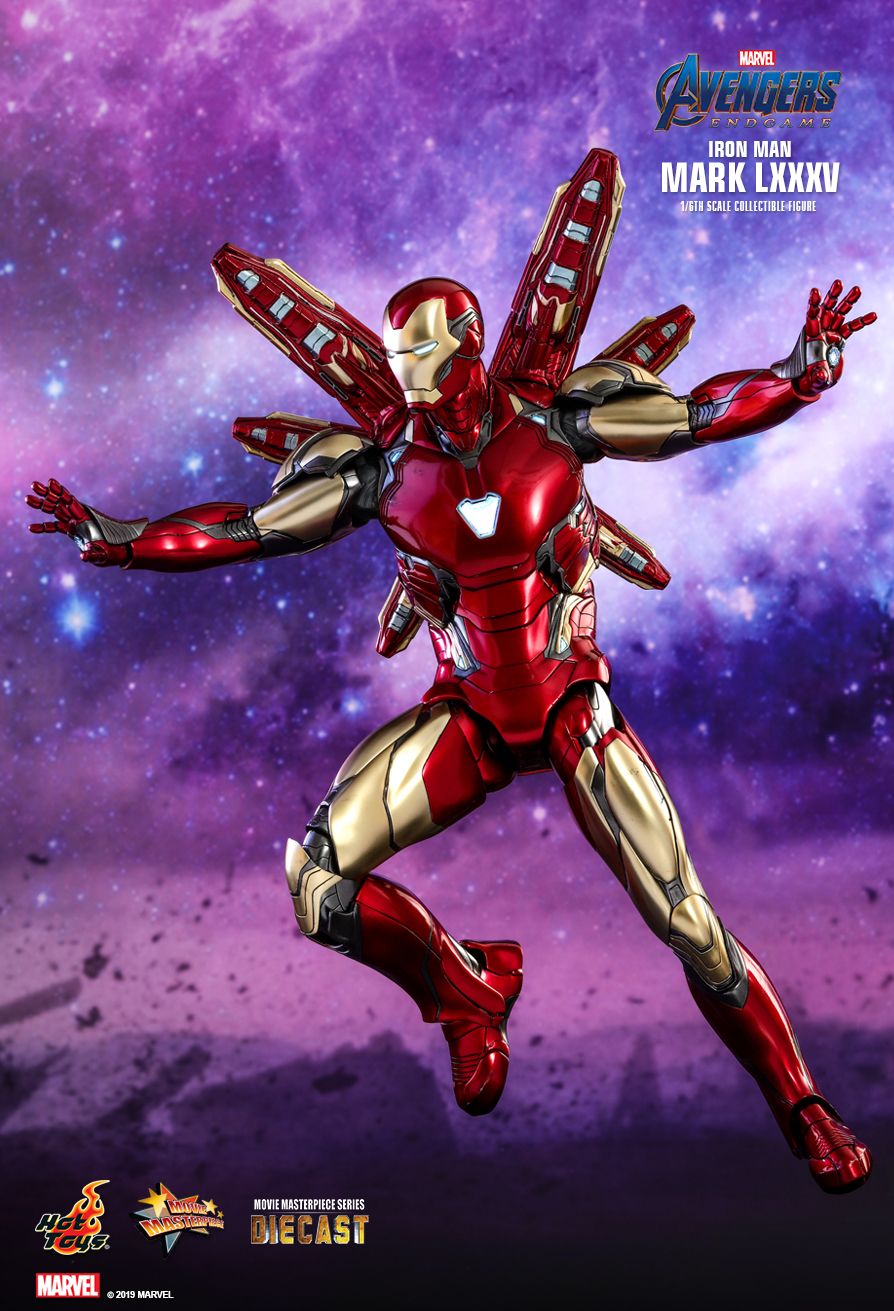 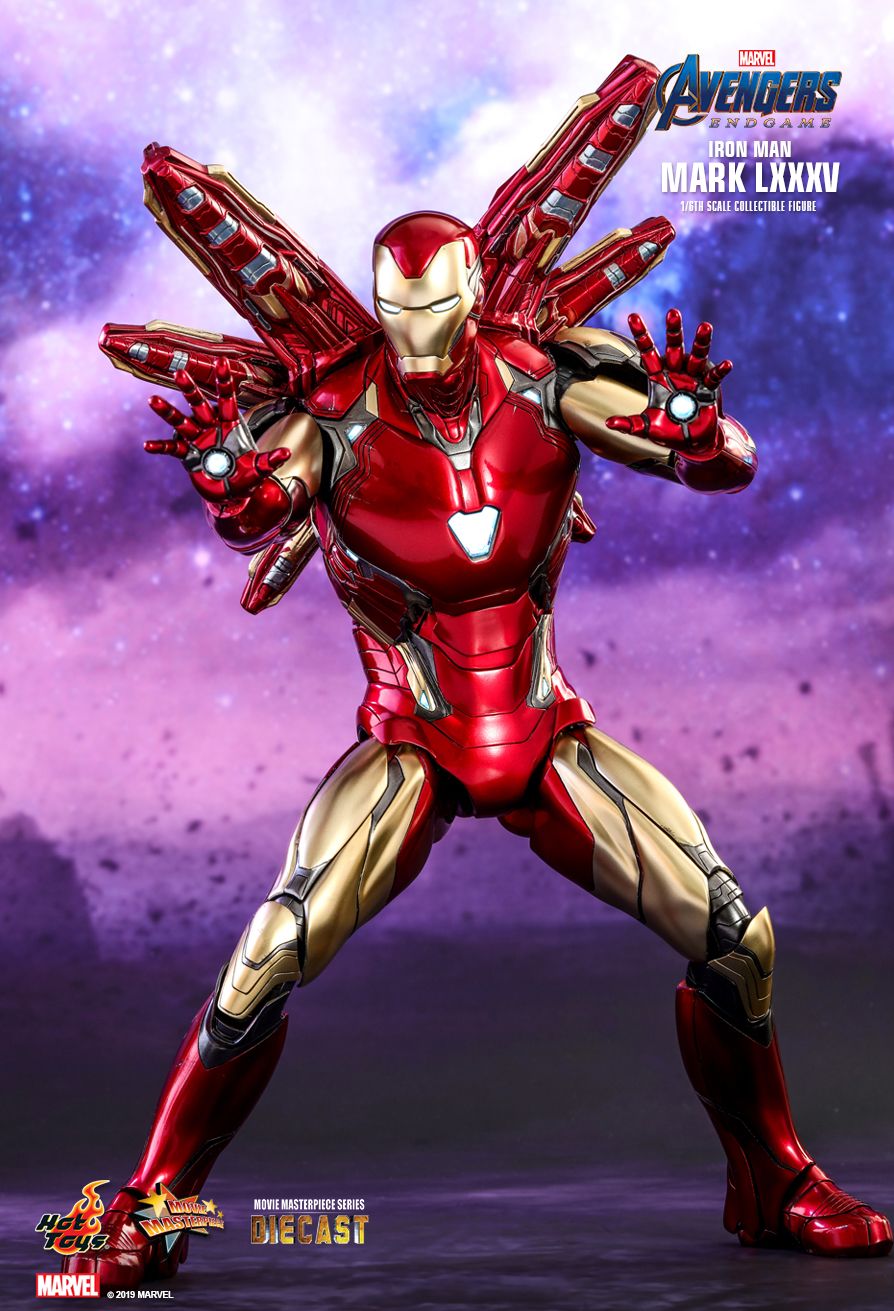 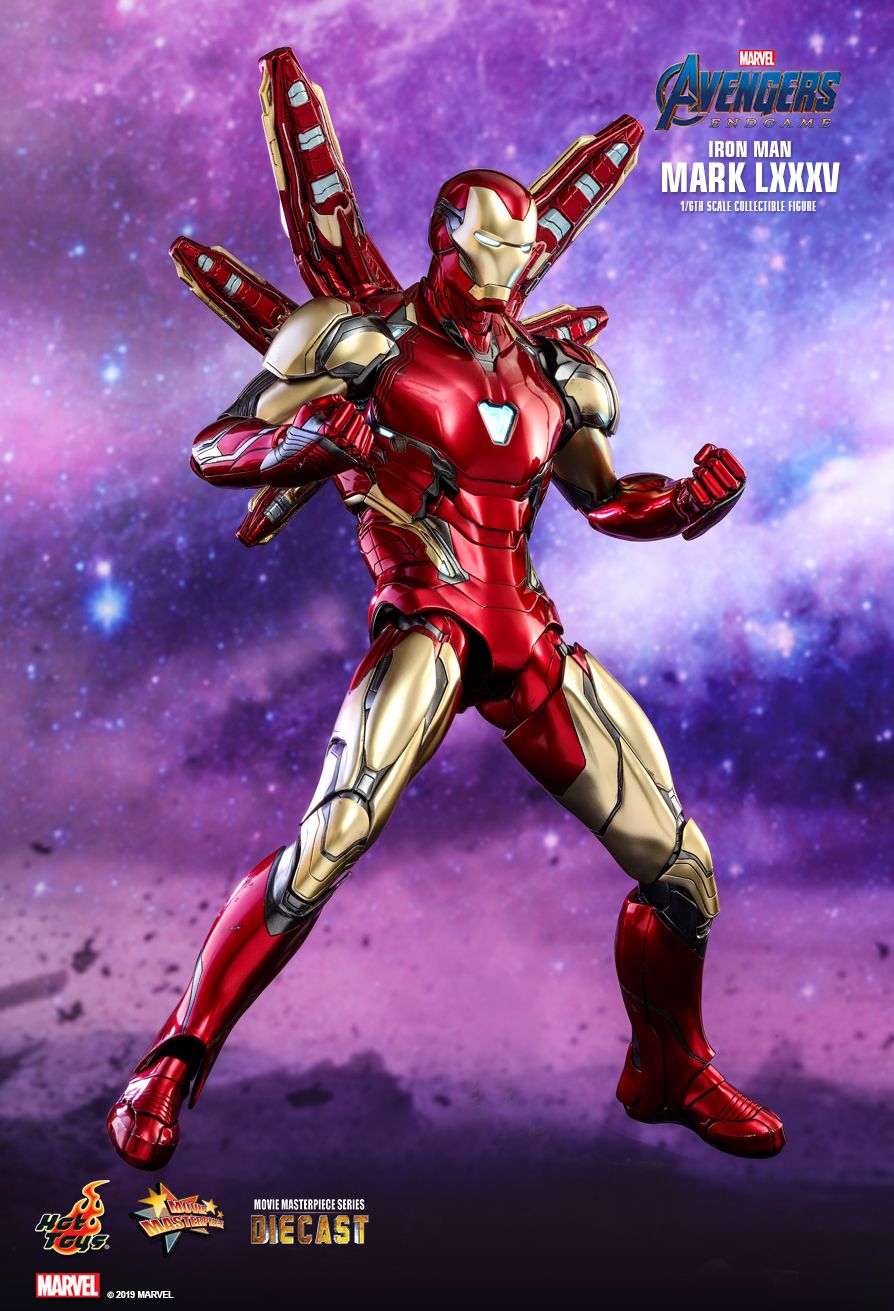 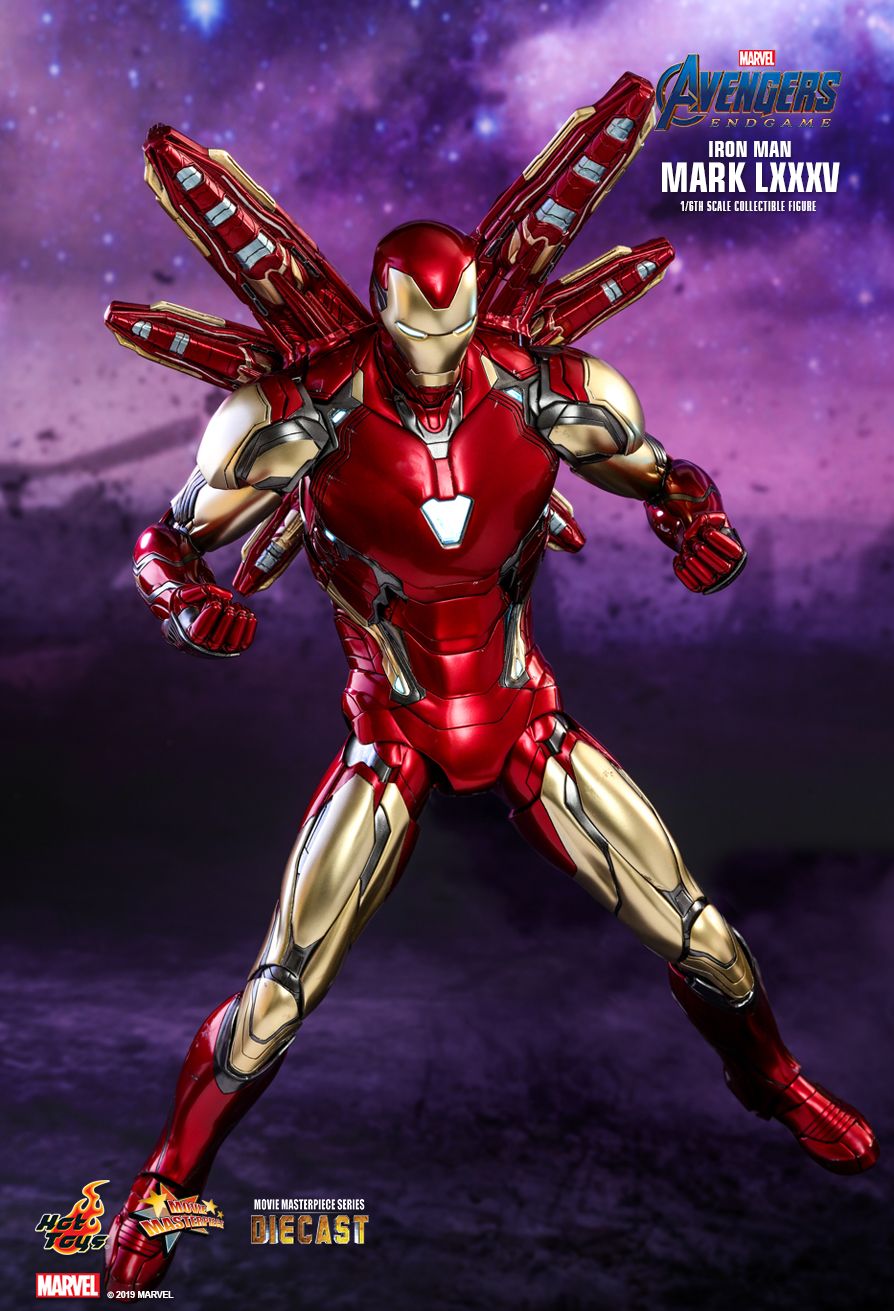 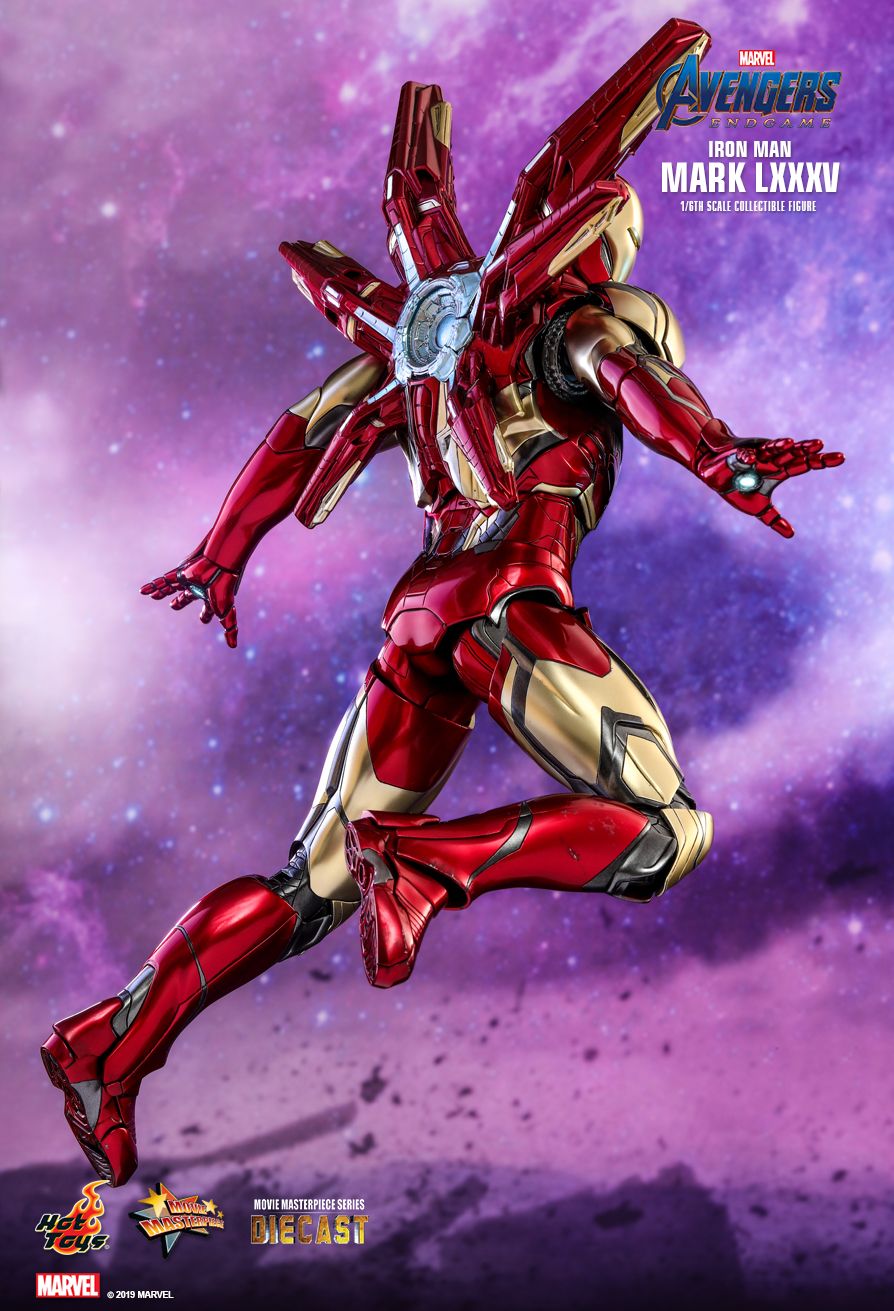 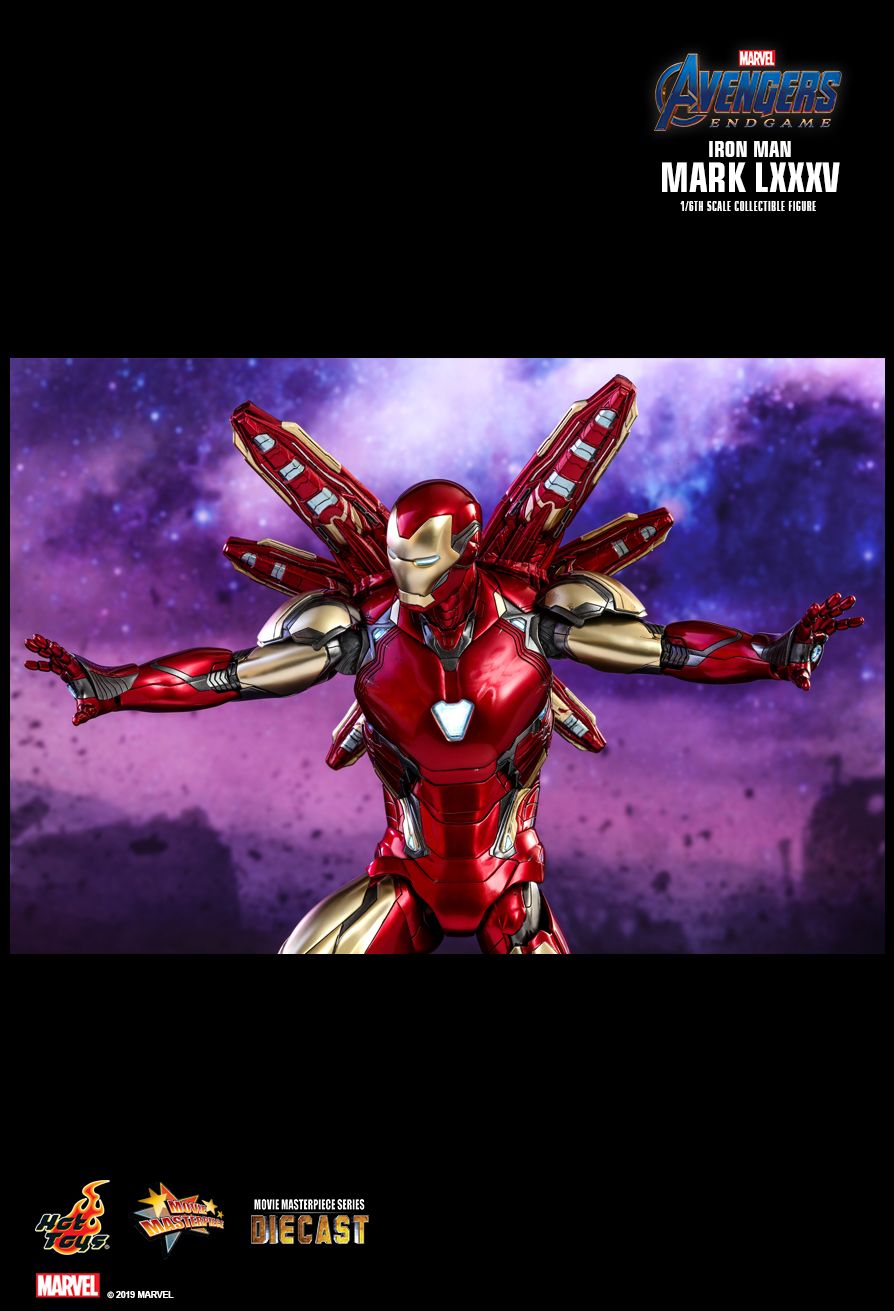 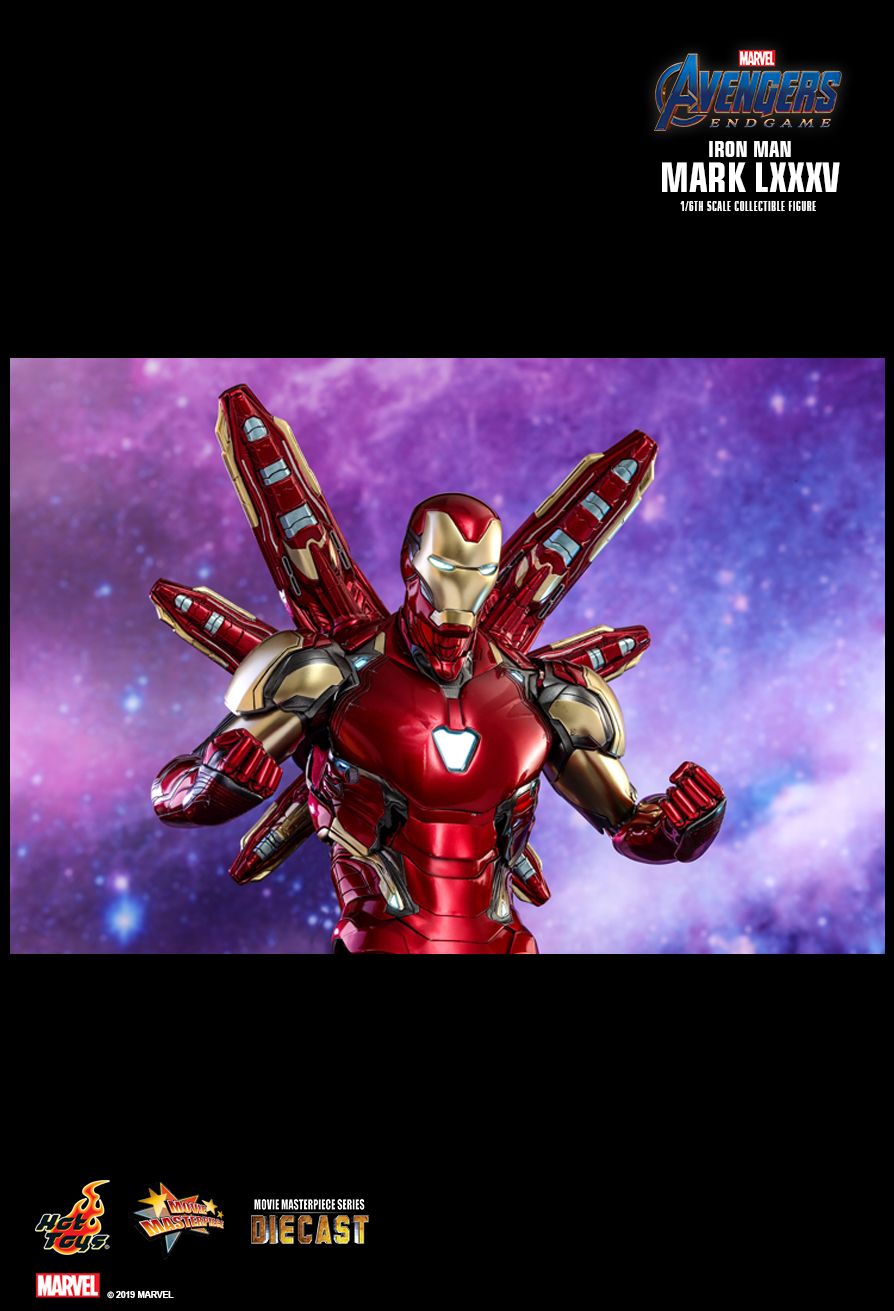 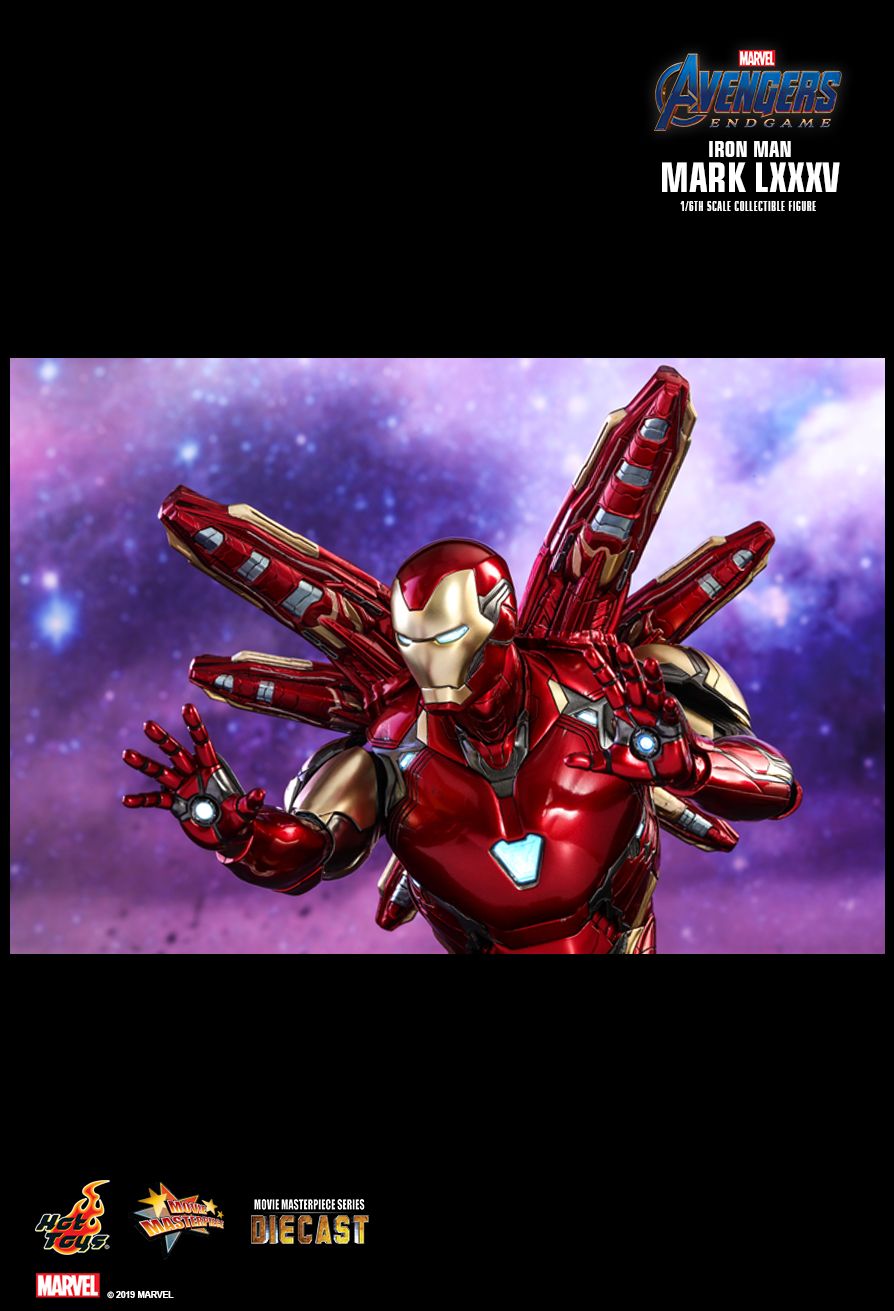 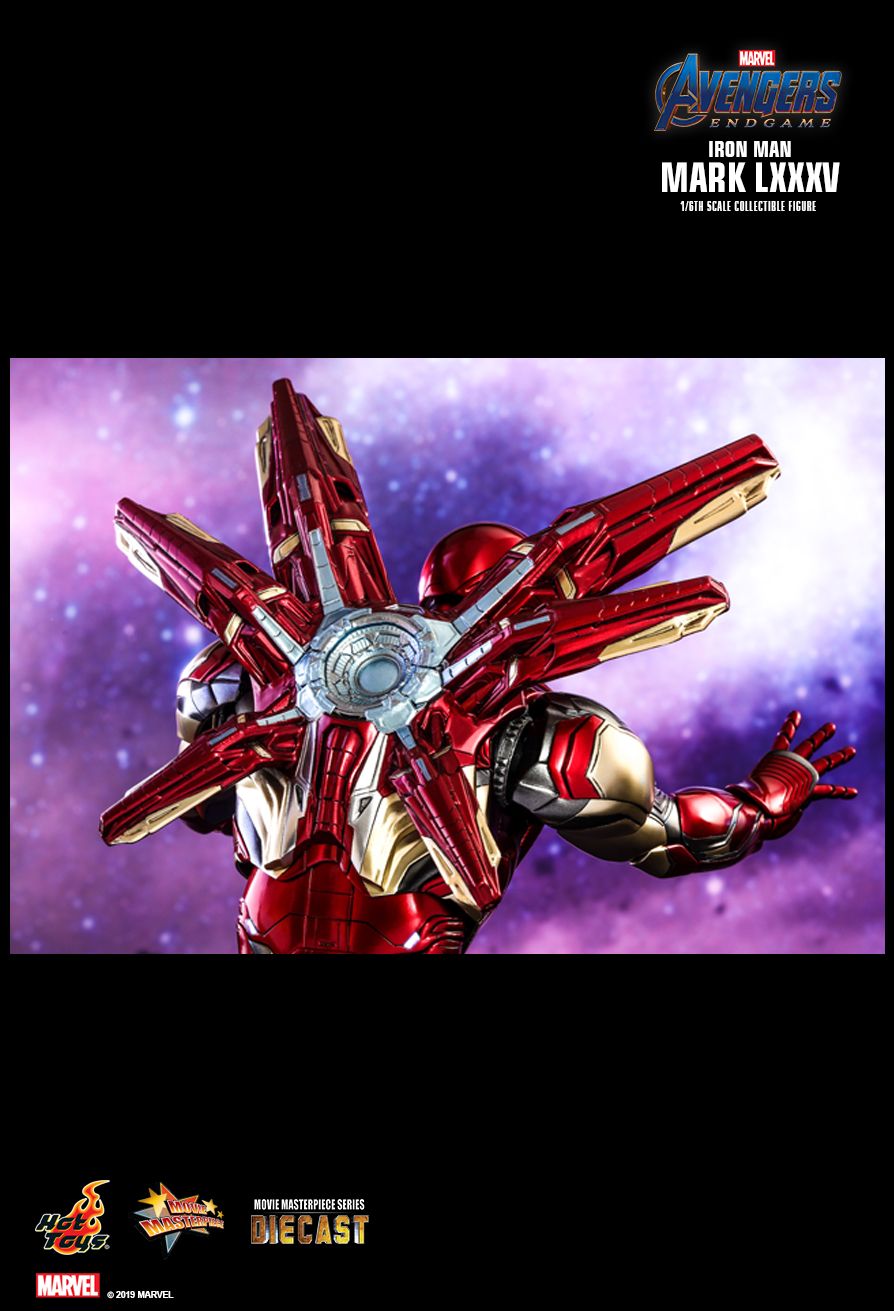 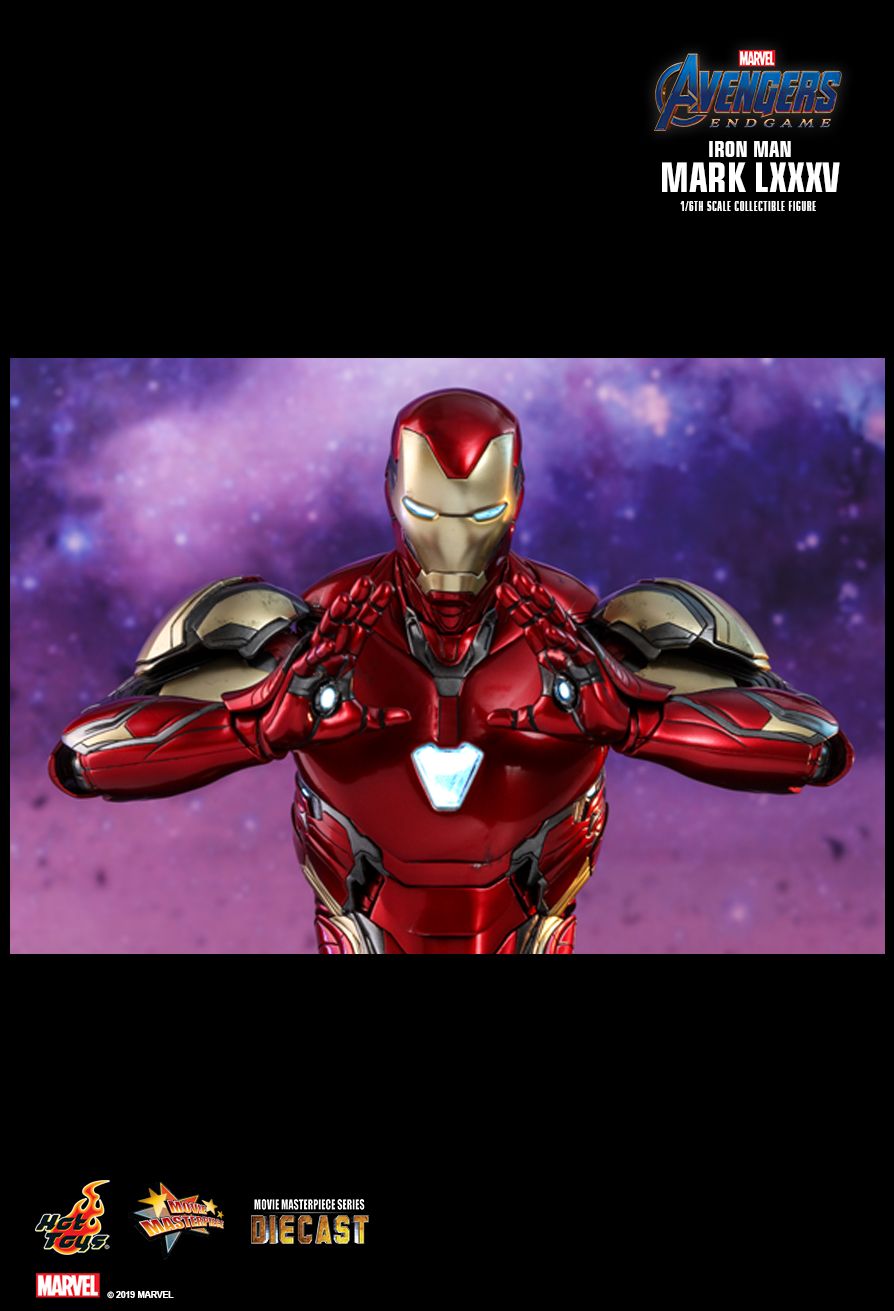 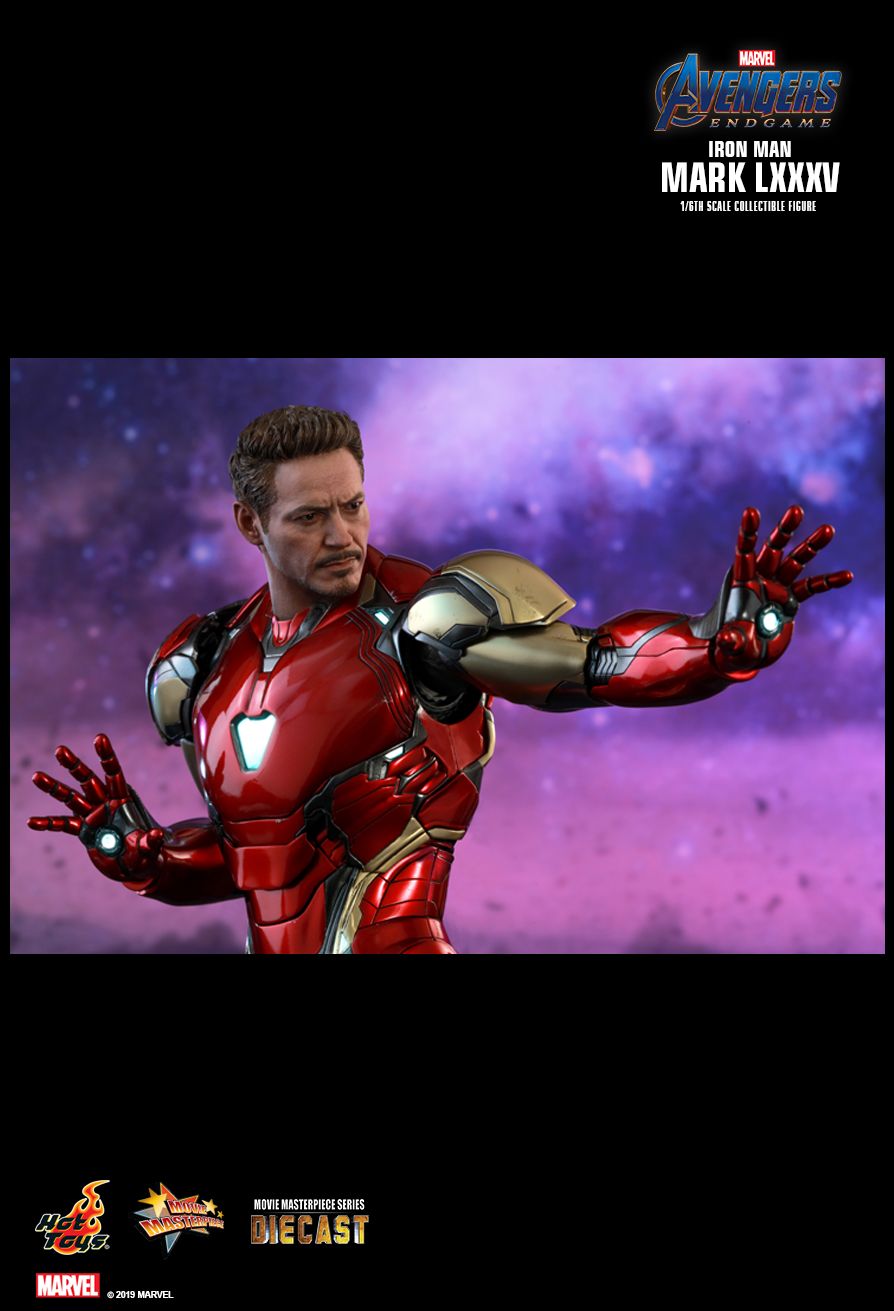 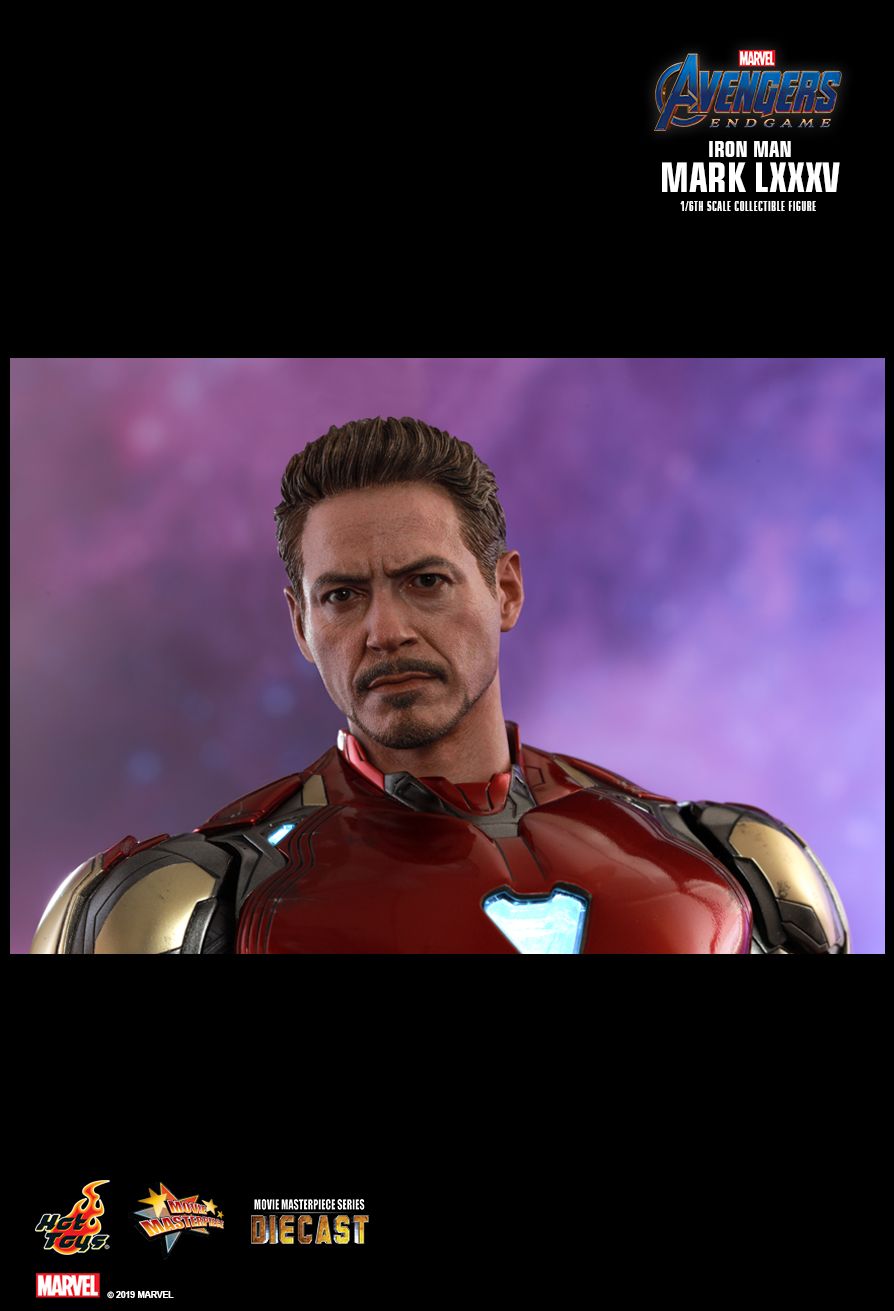 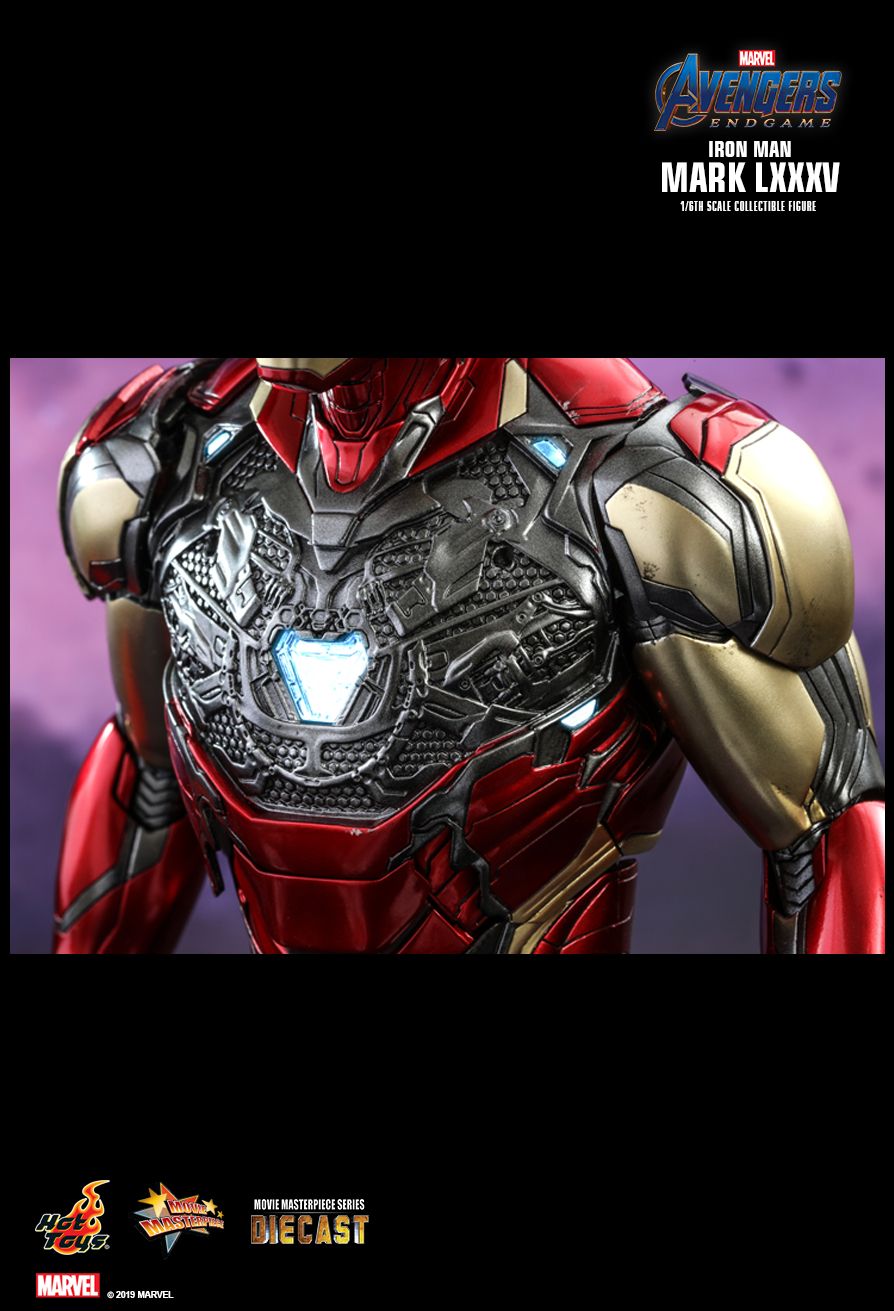 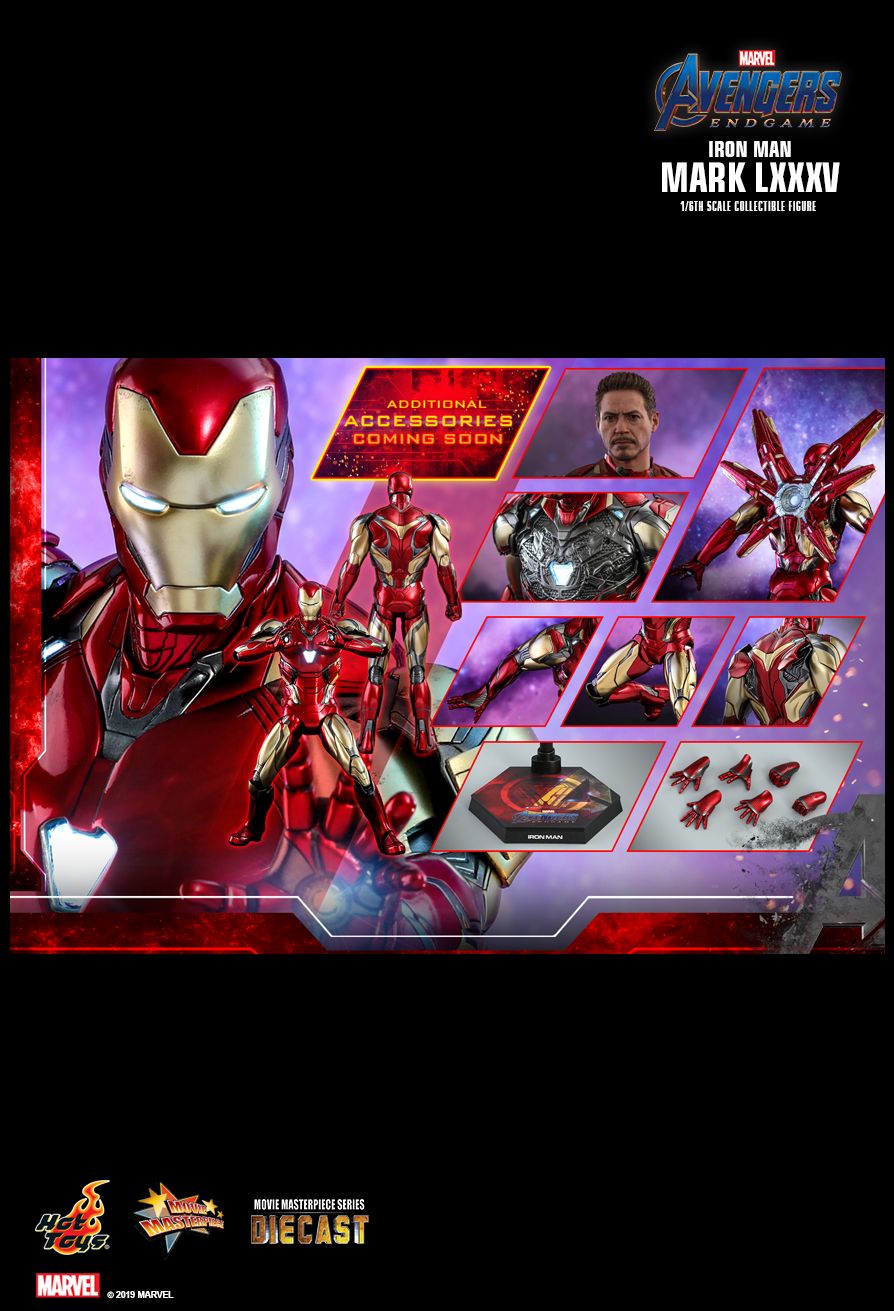 Founding Father
Posts : 7657
Join date : 2018-03-29
Location : Somewhere between myth and reality.
Looks very nice and sharp, but that is nothing new. Not being the biggest Avengers fan, I fail to appreciate many of the subtle (and even not so subtle) differences between each successive iteration of the Iron Man suit, so it is difficult to muster up excitement on a personal level. Alex provided me with a chart showing the different variants. And his own working his way to perfection creating, customizing, and kitbashing is to me a much more impressive quest than yet another HT Iron Man.
_________________
I'll be back!

To celebrate the re-release of Avengers: Endgame, Hot Toys is excited to reveal the addition accessory specially designed for 1/6th scale Iron Man Mark LXXXV collectible figure to mark the occasion! Interchangeable on the highly detailed Iron Man figure to recreate the MOMENT, this LED lighted Nano Gauntlet with articulated fingers has taken direct inspiration from the remarkable scene in the movie. Moreover, Hot Toys’ team has greatly improved on head sculpt and characteristic design of the forearm armor to bring in the most true-to-movie details on figure! Check out our ever expanding Marvel Line-up for more! 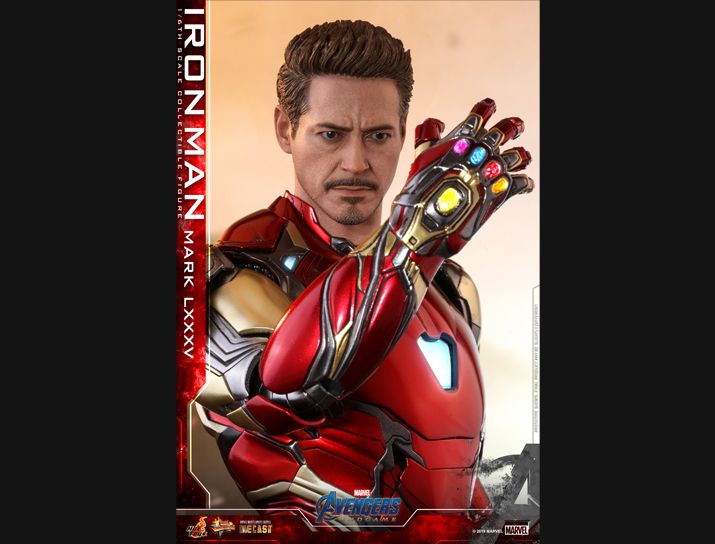 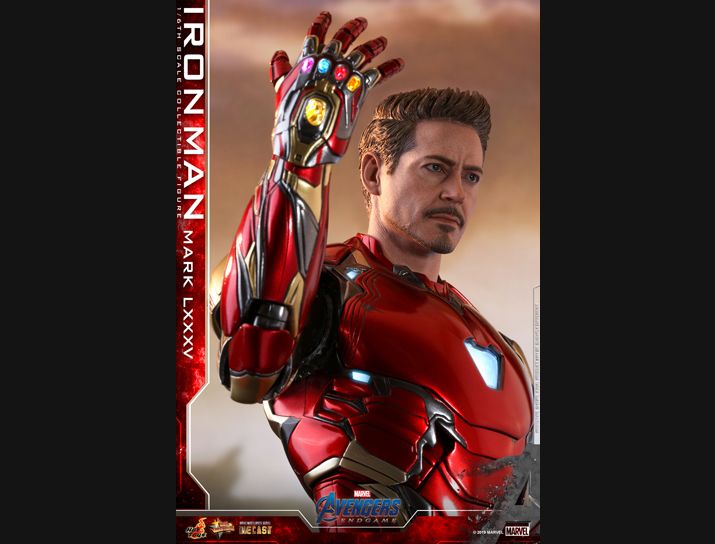 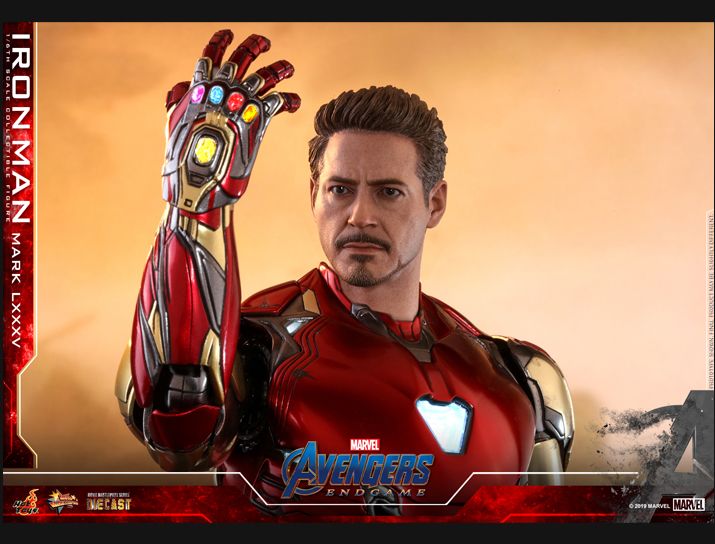 GubernatorFan wrote:Oh I'm getting it now for sure! Just kidding... still haven't seen the movie.

Founding Father
Posts : 7991
Join date : 2018-03-29
Location : Island of Misfit Toys
With Disney + coming I wouldn’t be too sure it will be available on Prime. Disney is pulling all their stuff off of other formats. The way everyone is starting up their own subscription “channels” is going to be annoying. I have no interest in subscribing to 40-50 different channels just to be able to watch certain programs — if anything, it’s probably going to turn out to be a good thing for me, as I’ll stop wasting time on TV and focus more on books.
_________________
Mark