TRICITY : Goddess of Lightning.
(Adrianne Curry: America's Next Top Model winner, Host of Stan Lee's Super Fans, VH1) appears as Tricity in the comic book: Gekido #1)
"They" took her. Tortured her. Forced her to do unconscibleable things. Using bio-tech elements, they turned her into a human weapon to carry out their twisted missions... She wakes to find scars all over her body. Someone had She starts to remember... Her name was Genie. She checked special needs children, was an aspiring writer trying to move on with her life after the breakup from her fiancé, until... they took control of her mind, turned her In battle, her neural link broke, allowing her to break free & escape. Now she is the one in control! Her existence threatens their whole operation, & they won't stop until they Destroy her. Before they strike again, Tricity plans to use her electrically-infused cybernetic implants to exact revenge on her captors. They thought they made her into a weapon, but instead gave birth to their executioner. Now they will be the ones to suffer .

Tricity will embark on a journey to uncover the secrets that haunt her. She'll stumble upon a web of espionage lead by an evil dictator & the doctor that created her. Kill-Strike Muay Thai fighting with Mixed Martial Arts was downloaded into Tricity's brain Able to slice through anything, her Tri-onic

arm implants are powered by the arteries of her circulatory system & glands acting as a generator. Her exposed skin is deadly to the touch causing electrocution upon contact. Her mask harnesses the electromagnetic Discharge from her eyes... if unleashed, she can ignite like an atomic bomb!

"They" are known as GAH (Genetically Altered Humans) led by their dictator, SUNDER

, bent on world domination. They created Tricity & used her to lure the man she once loved, PHARRELL

, to them. He Found an ancient alien artifact of immense power that holds the secrets of existence. Tricity was forced into a cataclysmic battle with him. It triggered the artifact to solidify, consuming Pharrell. It transforms him into an unstoppable weapon named RAVEDACTYL

, in a War of epic proportions!

(Coco Austin: Ice Loves Coco with Ice-T) along with the assassin; GEKIDO

on the hunt for the evil mystical LORD SHINRYU

(Cary-Hiroyuki Tagawa: Shang Tsung of Mortal Kombat & The Man In The High Castle) while someone in the shadows watches on, the vigilante; CODE NAME: JUSTICE

who fights to discover the truth behind the conspiracies, corruption & Tricity's connection to it all. Now Tricity must confront them to piece together the puzzle & extract the elements they each possess before it's too late. She will risk sacrificing herself to try & stop Sunder's GAH before time runs out. If they bleed, they can be killed... blood runs through their Veins... electricity runs through hers.

Genie is a victim no more, for she has become something new. Something dangerous. Something deadly.
She vows to empower the powerless. She is retribution. She is power incarnate. Once the hunted, now she
Is the hunter. Never cross her, or face death by electrocution from the shock of the one they call, TRICITY


- E-mail us for your FREE GIFT from our web site at: www.BeyondComics.TV

- & "You may be drawn in our next comic book!" Enter at: www.BeyondComics.TV

, all related characters & logos are a & TM of Beyond Comics Holdings, LLC 2018. 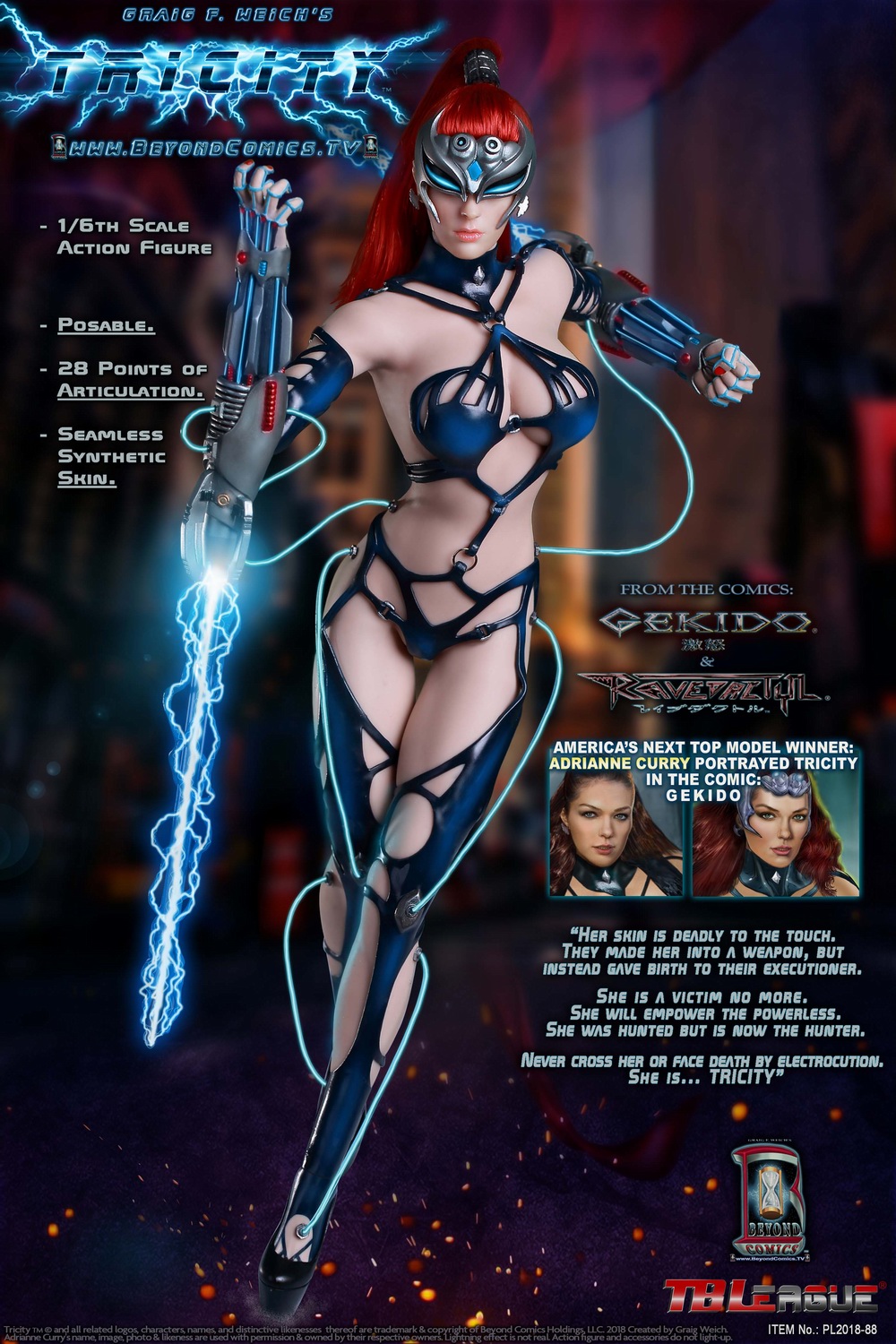 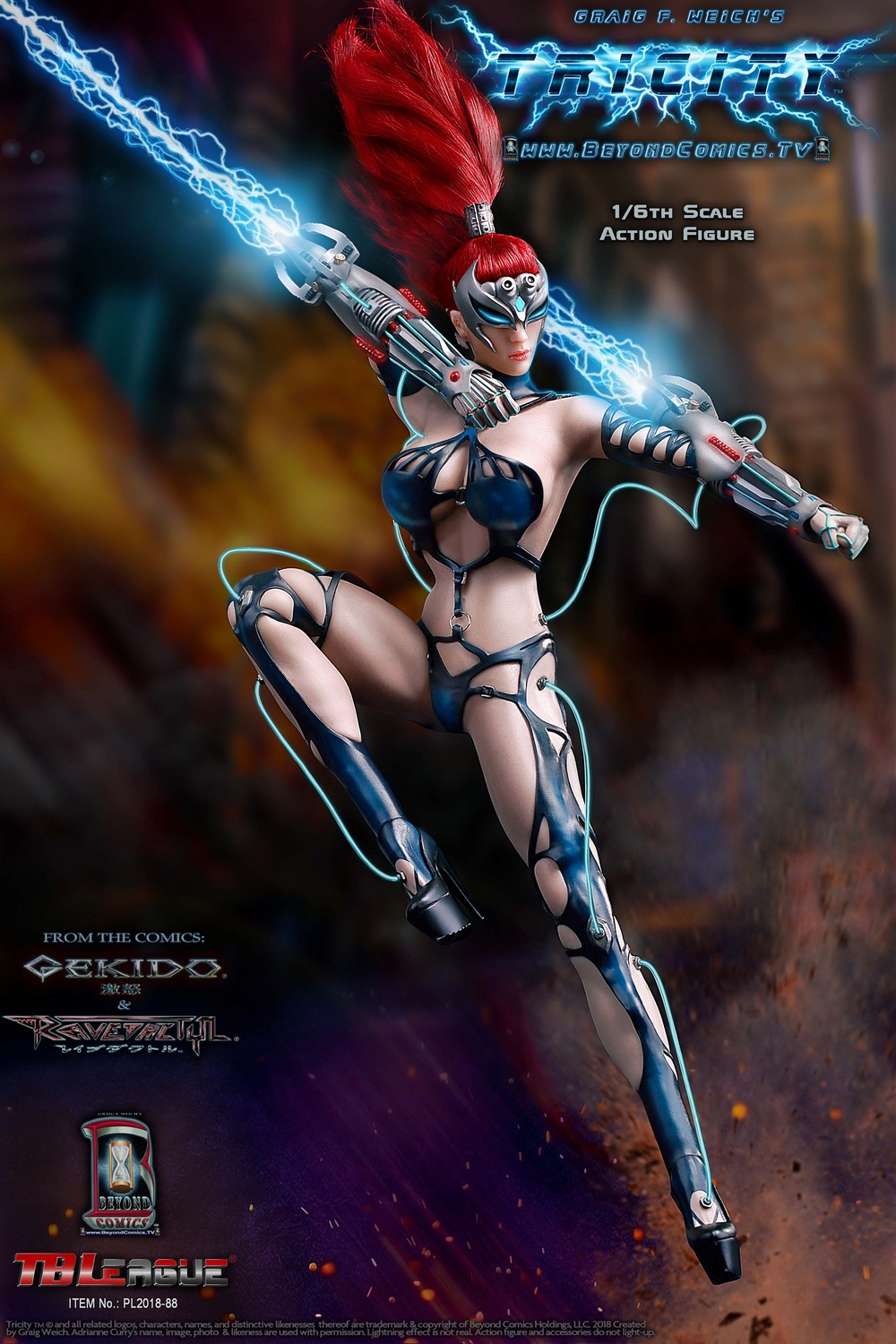 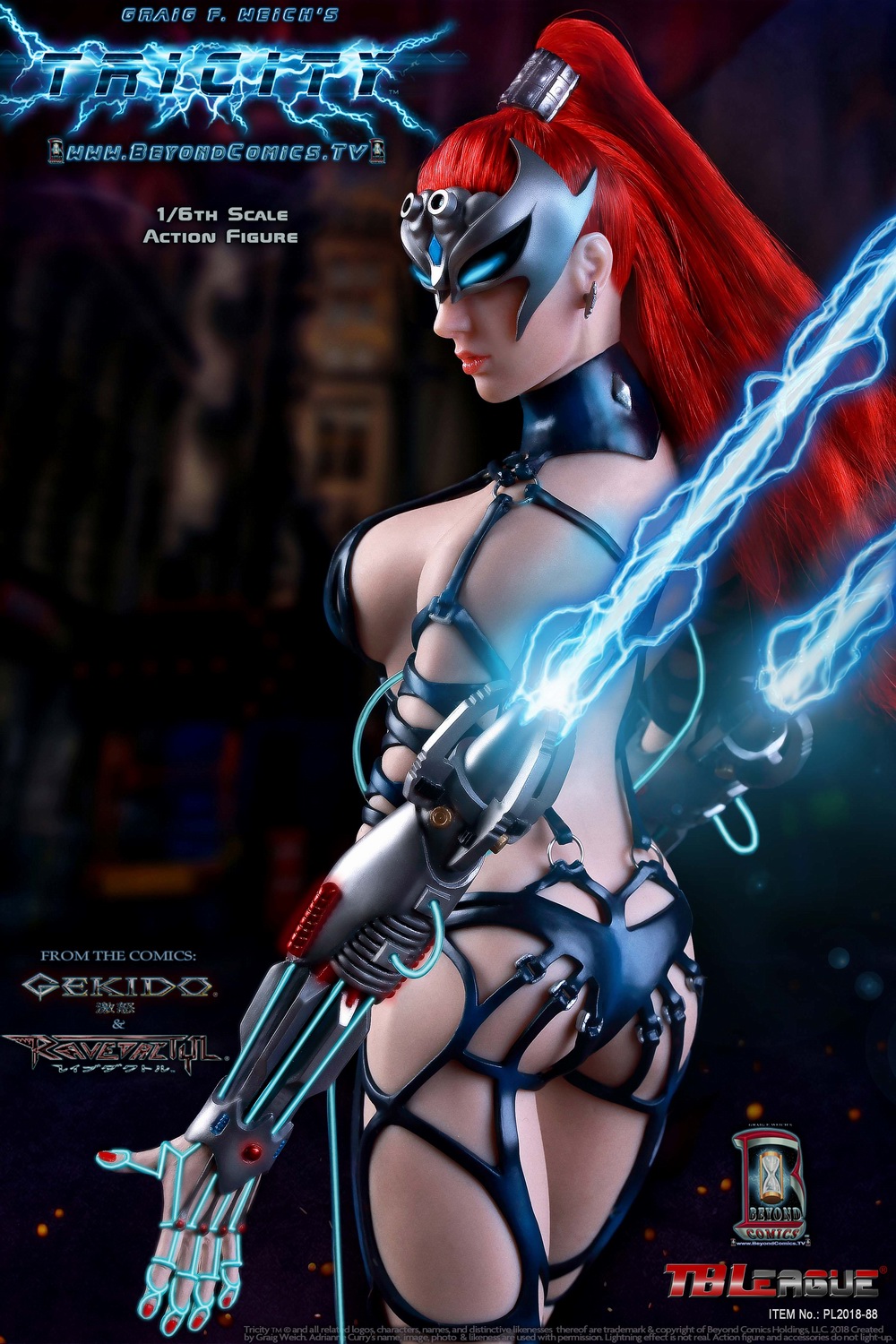 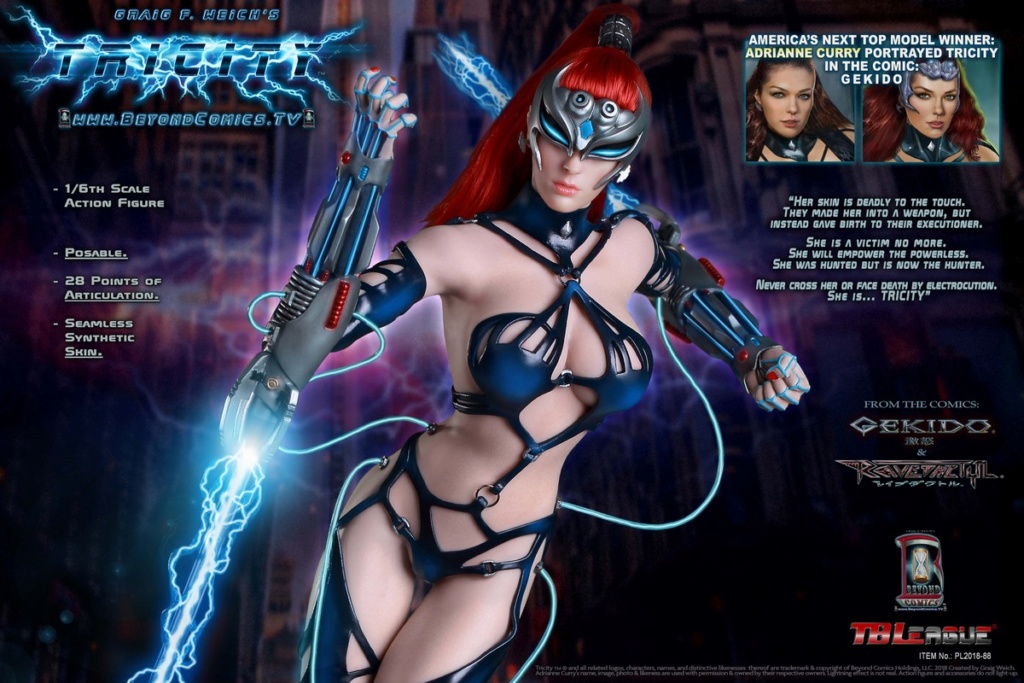 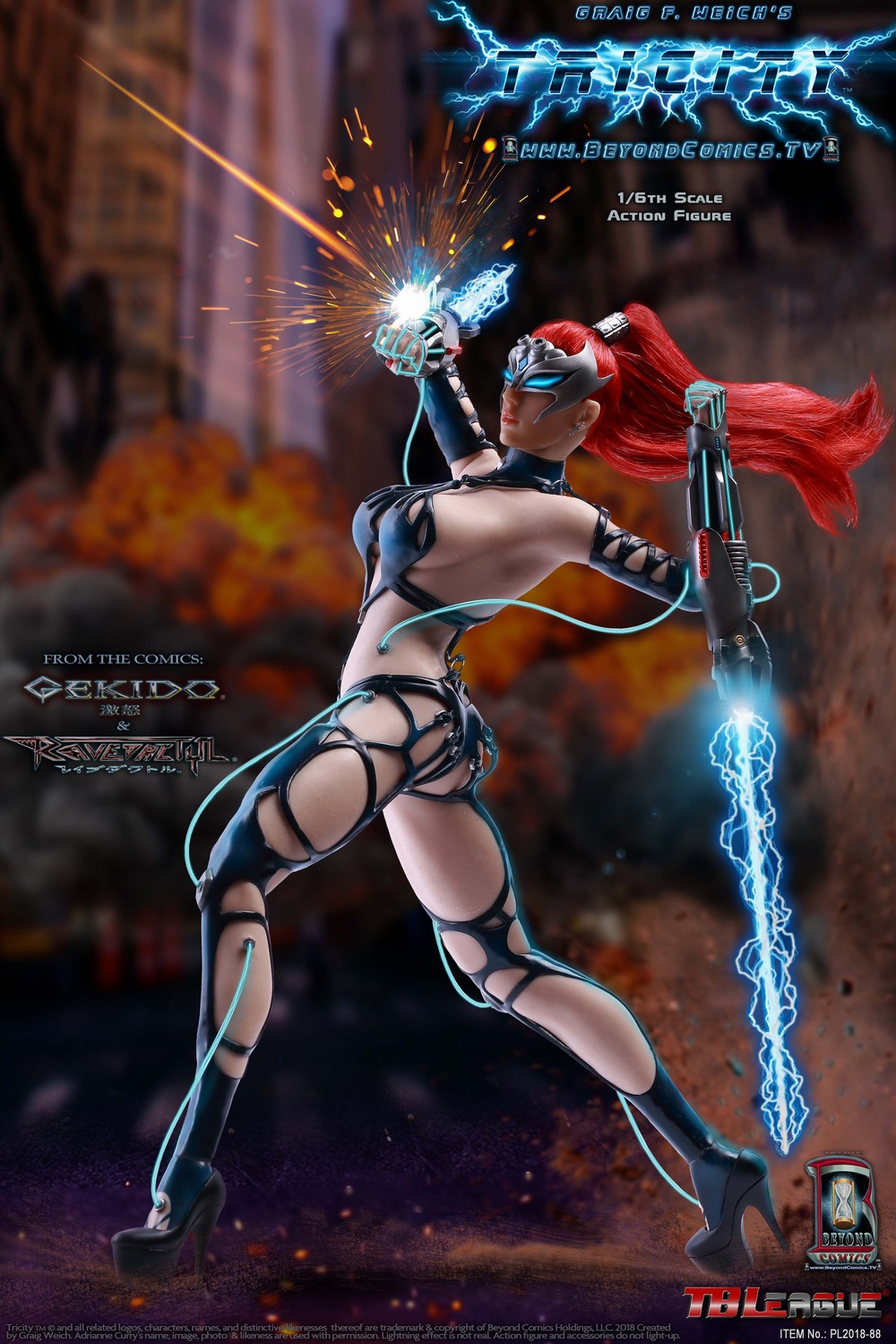 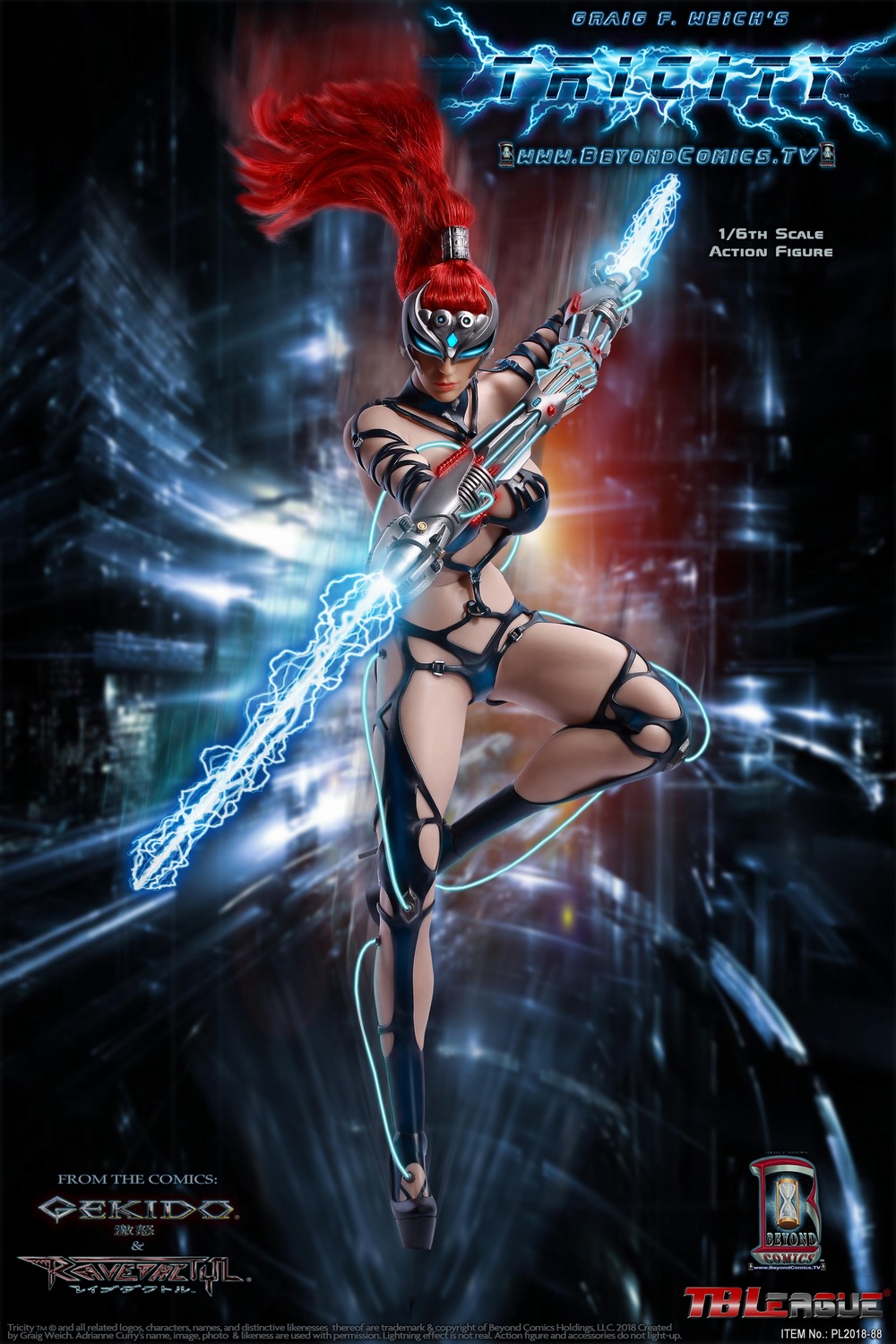 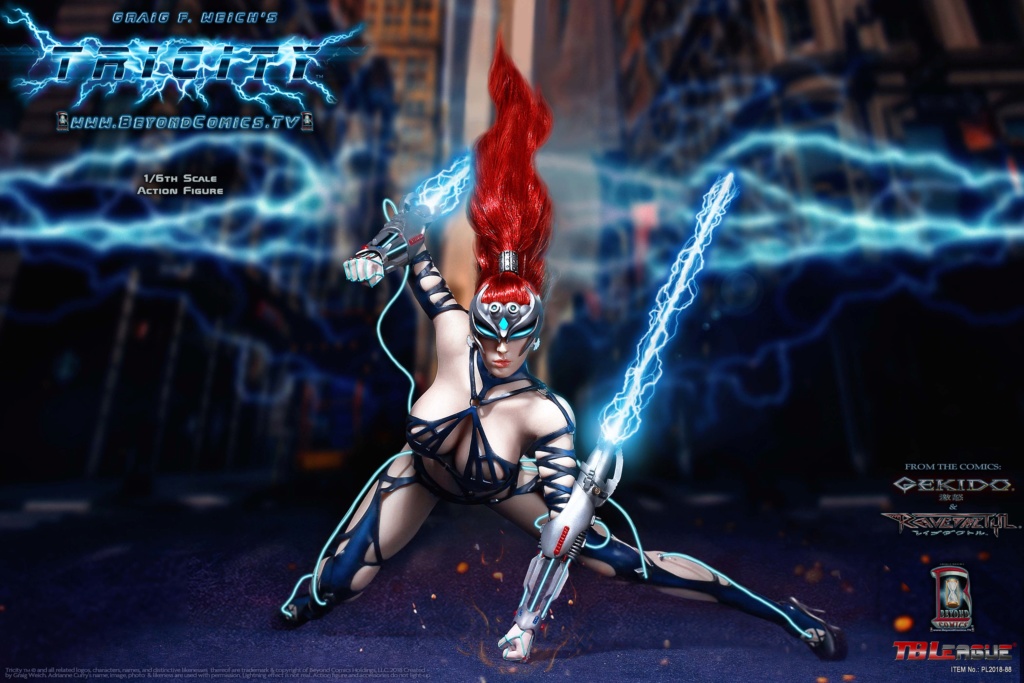 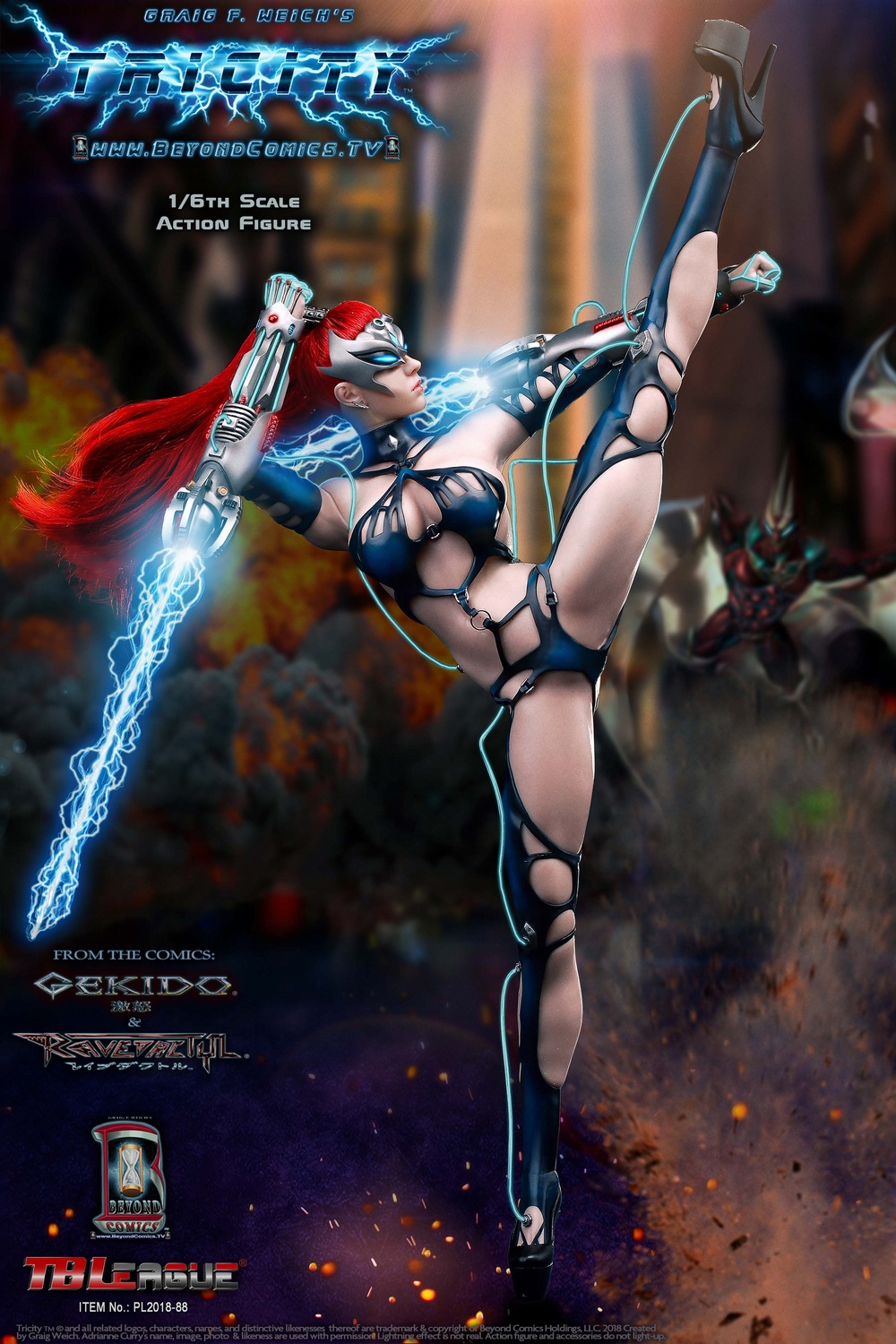 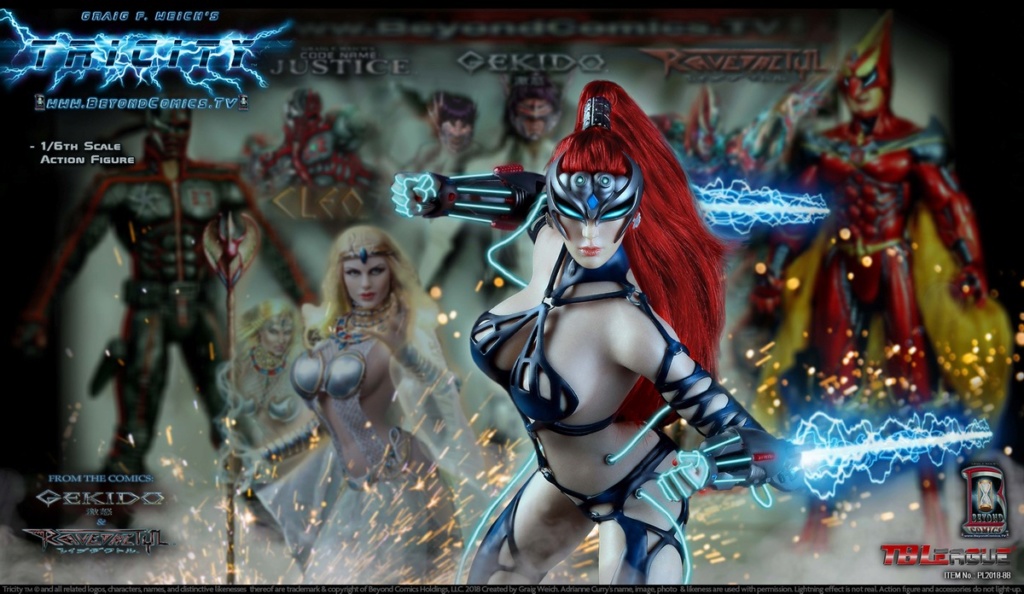 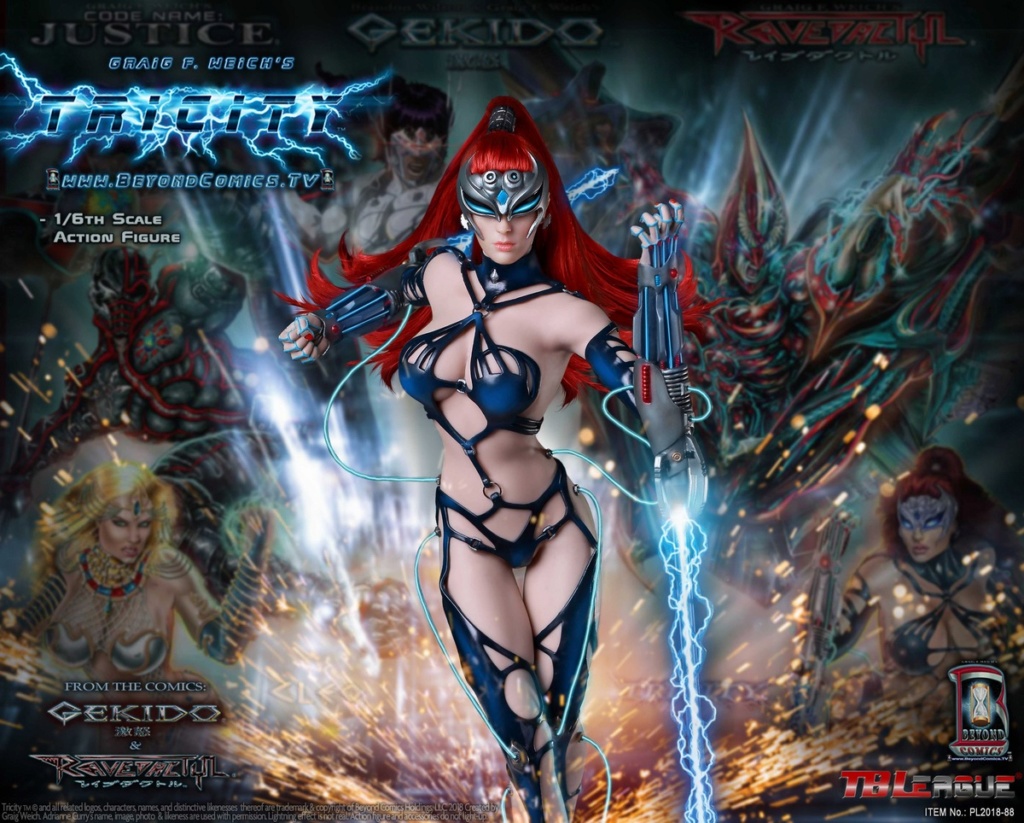 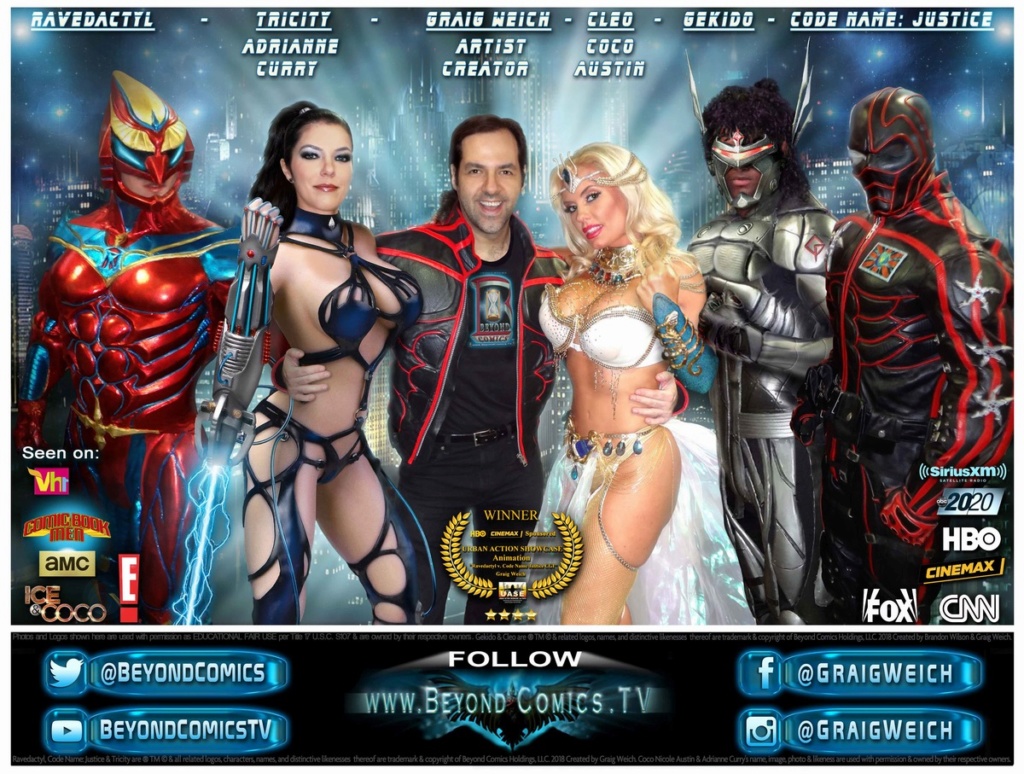 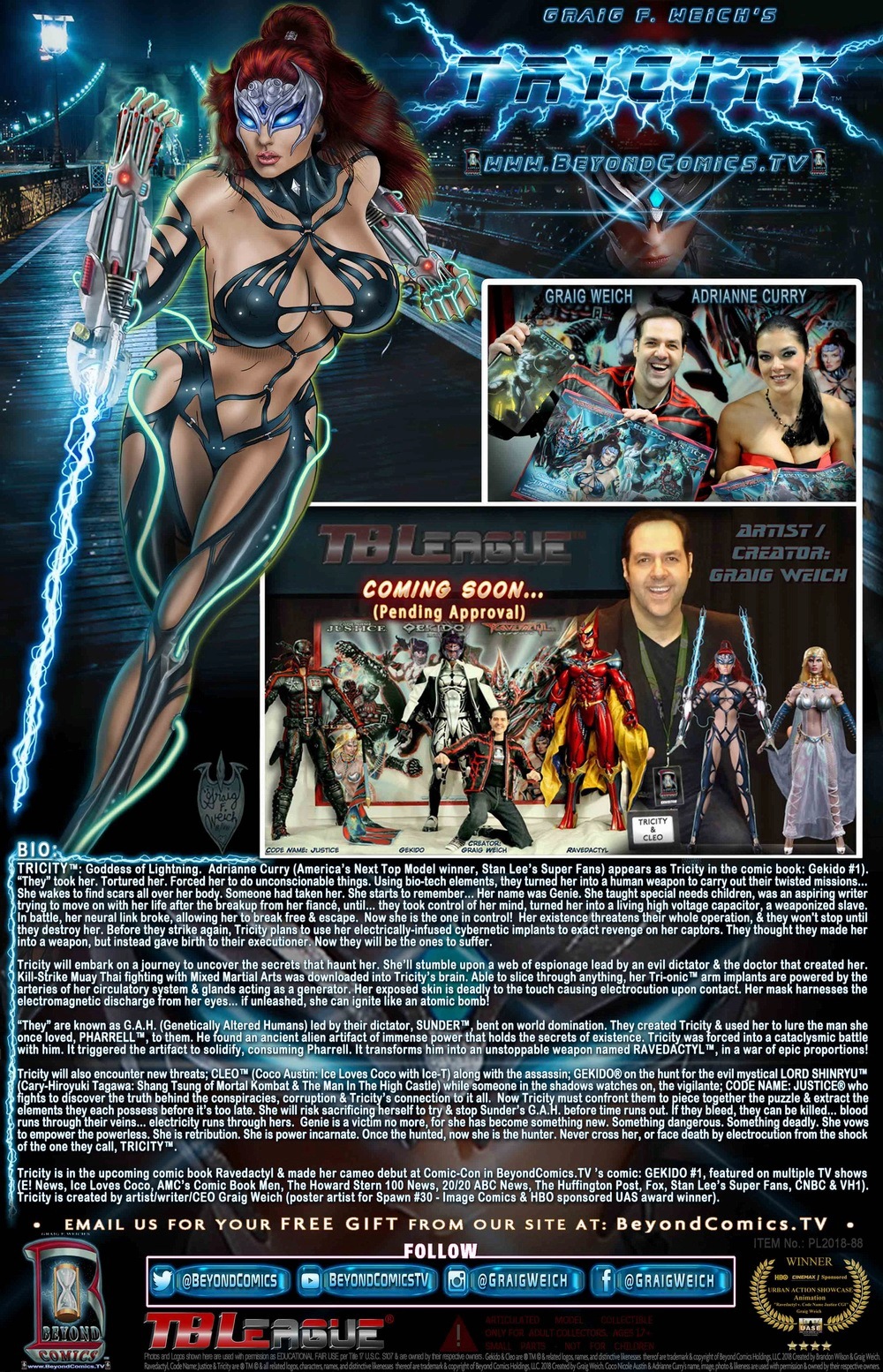 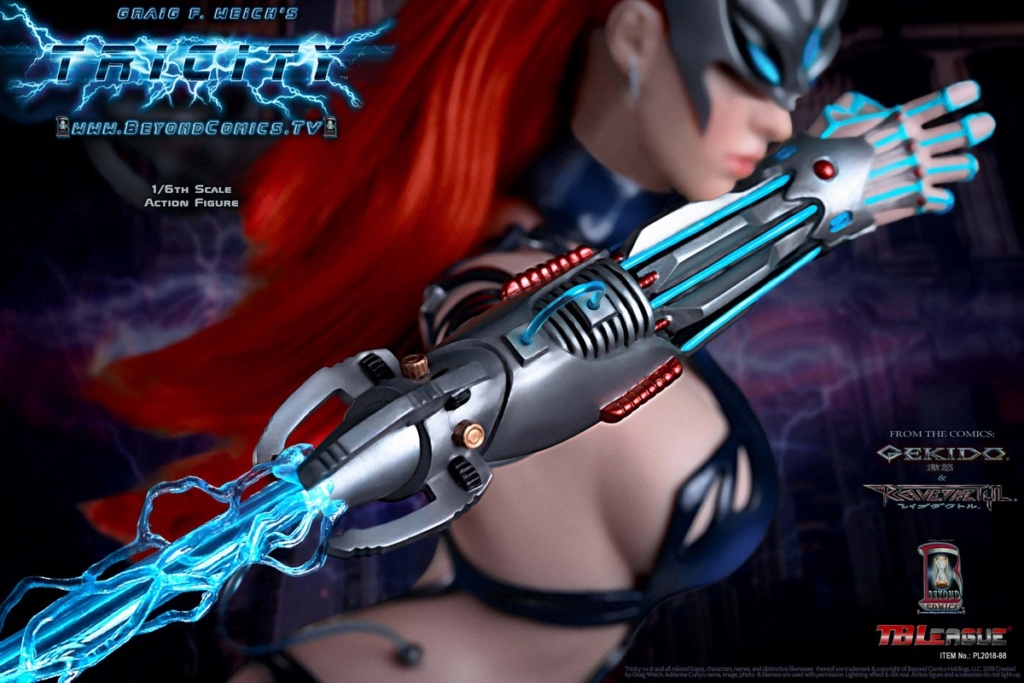 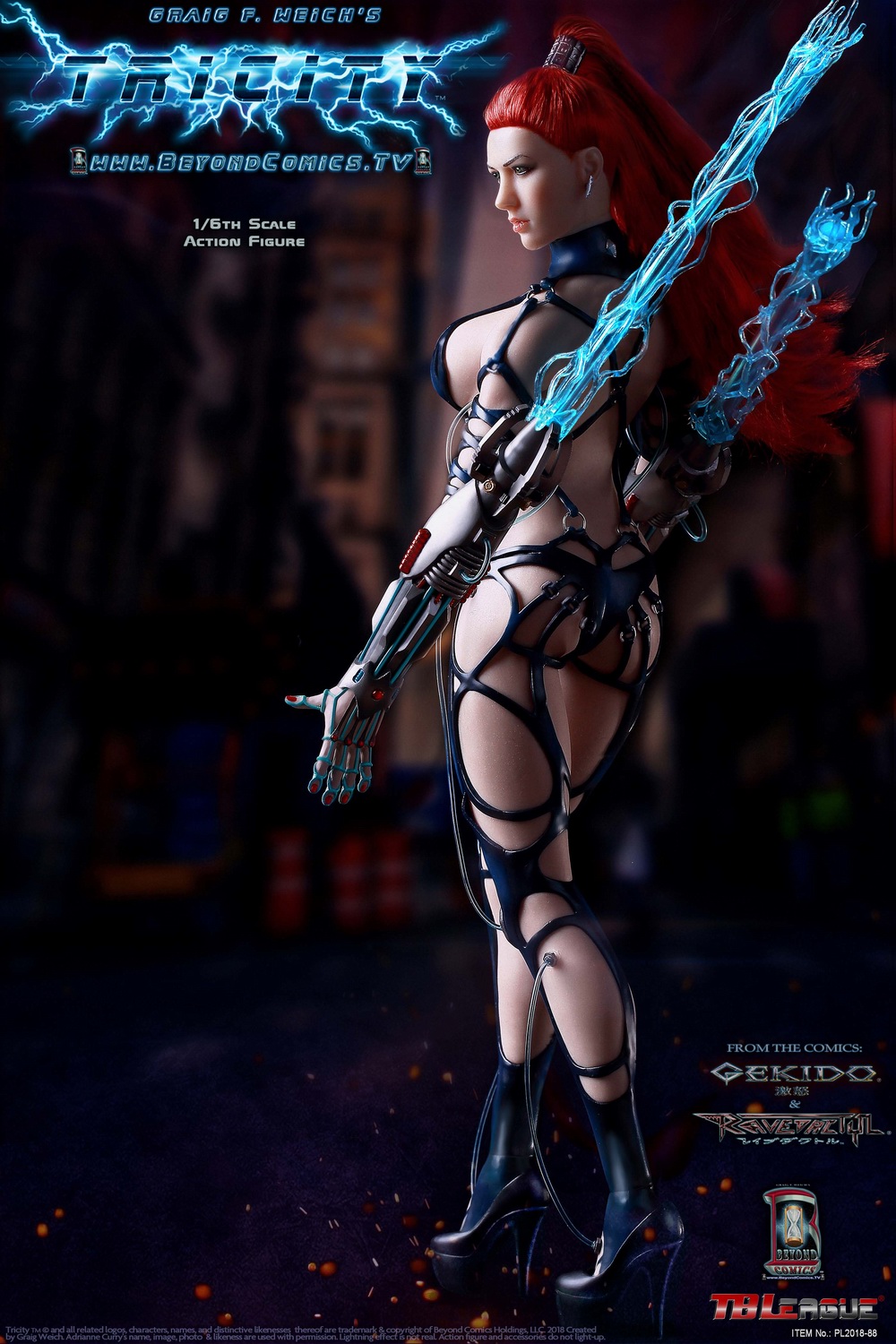 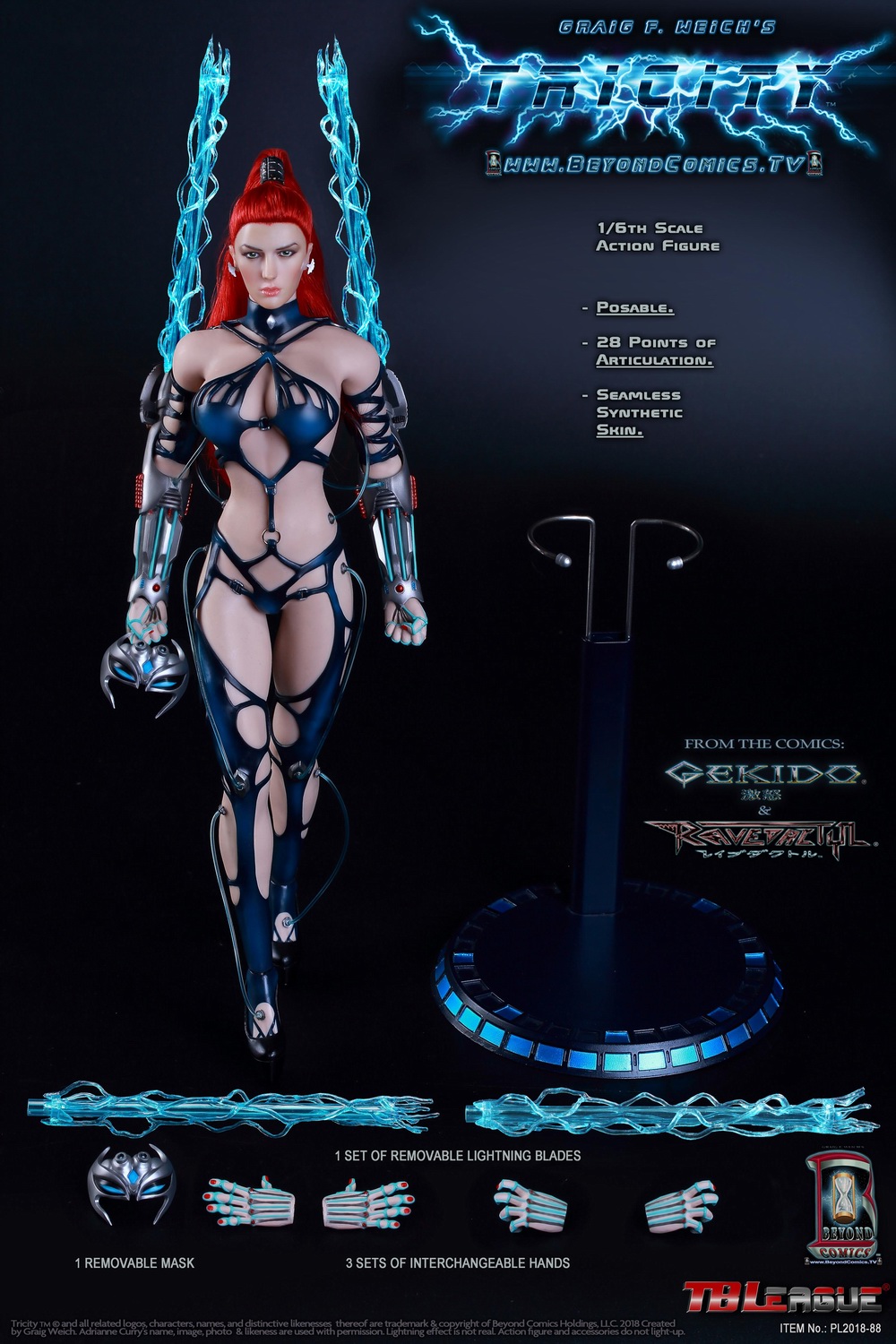 Posts : 266
Join date : 2018-06-20
Location : Somewhere over the rainbow...
Balancing this figure without a base must be quite a challenge with these huge heels.
This figure was in TBLeague's booth some expos ago, I think it was 2017 or 2016. I've seen in a youtube video showing some prototypes and she was one of them. There was a male Gekido character there too, maybe they'll announce him soon. Hope is the CodeName Justice, his design is neat.
Not gonna lie, I liked most part of her. I'm not fond of this red hair, the colour just doesn't match with the rest of the design. Maybe if it was a bit darker. As for the outfit... welp... it's kind of my niche. Reminds me a lot of some oldschool 90's comics, like Witchblade, Angelus, Spawn, Magdalena, Darkness... boy, those were good times for me.