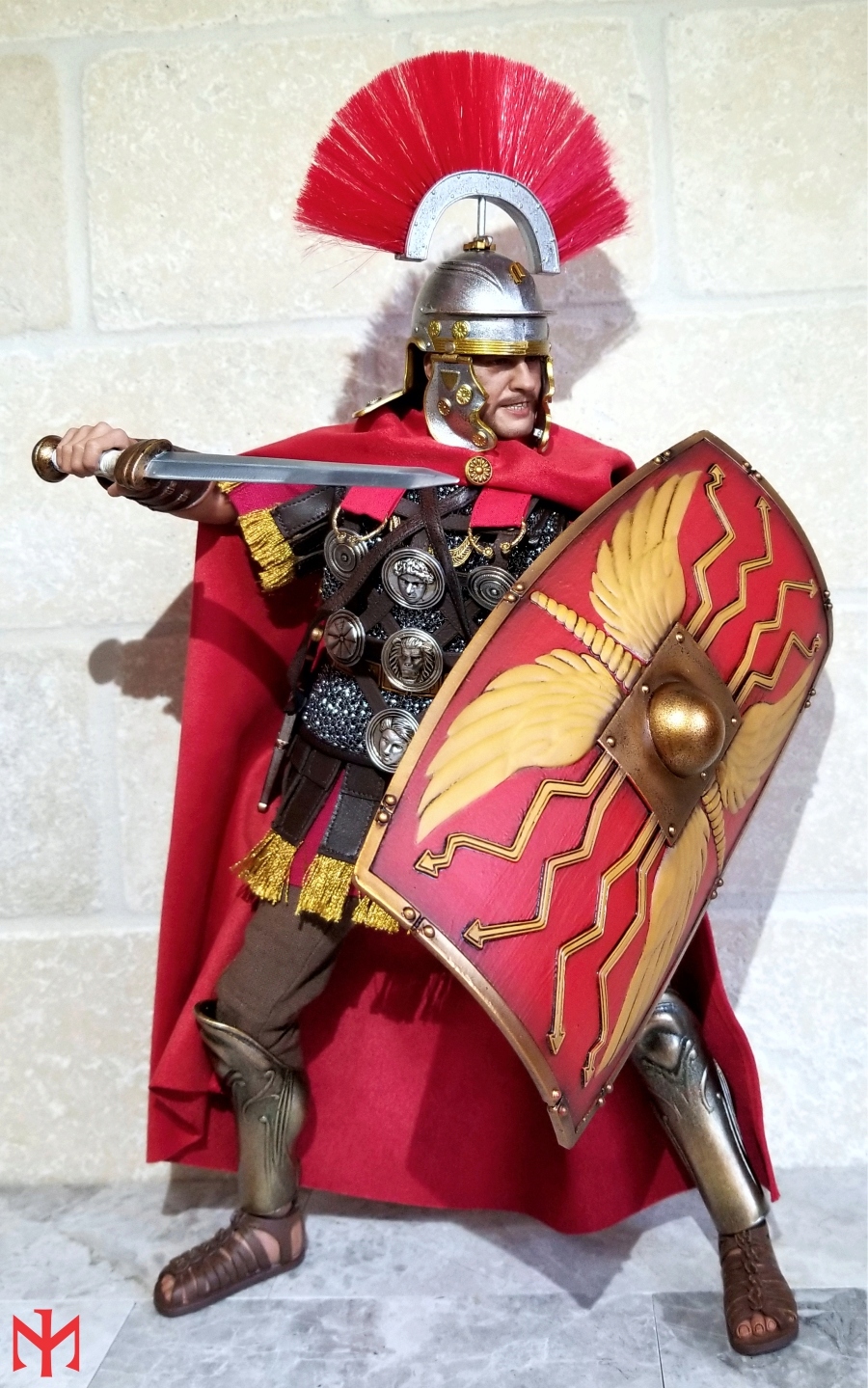 I just managed to finish and post my review of HH Model and HaoYu Toys' Rome Imperial Army Reloaded Infantry (legionary), but the next figure in the same line, the centurion, had already arrived. Given the natural interest in comparing the figures and the fact that the legionary quickly sold out in some of the most common venues, I have rushed ahead to supply a review for the new product. The figure is already available in Asia and on eBay, and is expected for immediate arrival in most US stores that will carry it (some appear to have it already). 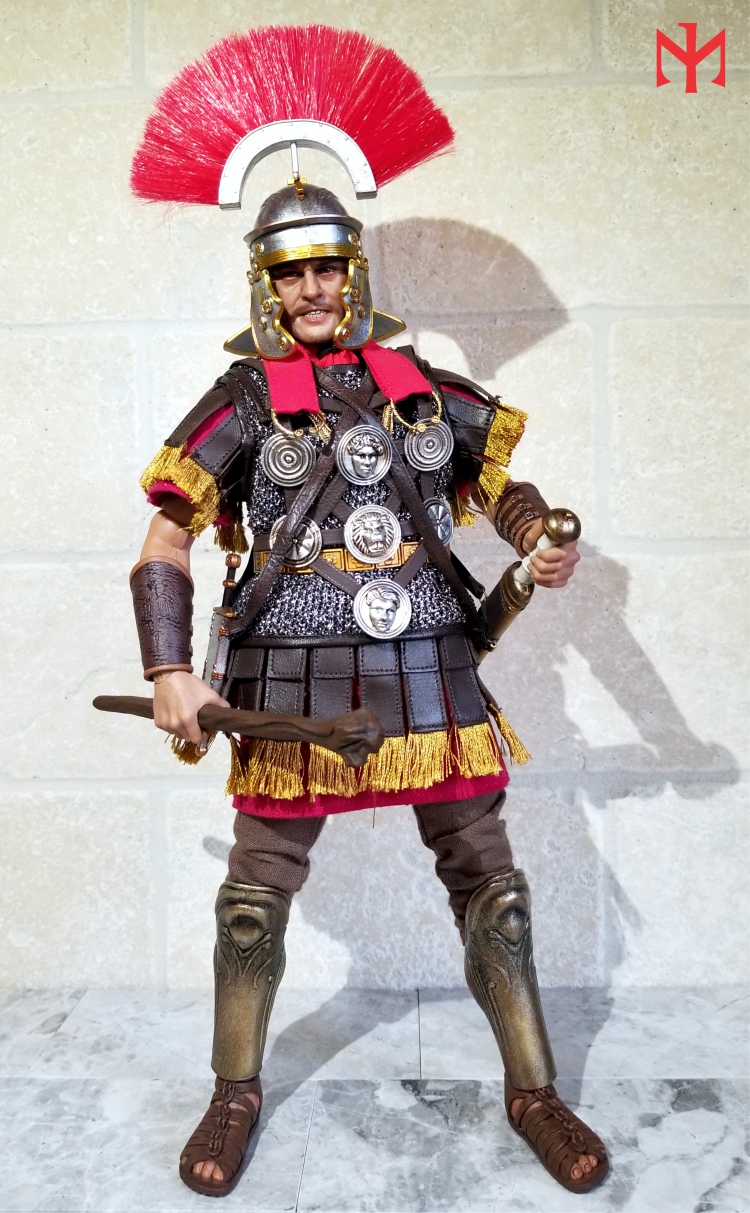 The Roman centurion comes in a solid cardboard shoebox-type container very similar to but a little narrower than the one for the infantryman (legionary). The face and side panels are decorated with a single continuous promotional image of the product and bear the HH Model and HaoYu Toys logos, while the back side has the requisite cautionary warning about small parts and choking hazard. When you pull off the top cover and remove a relatively thin sheet of black foam, you get to the first of two black foam treys, containing the figure, helmet, hands, and some of the accessories. Below this lies the second black foam trey, containing the shields and other accessories. Everything is collector-friendly and safe, and I appreciate the use of foam rather than plastic treys, all the more so after recently revisiting the ACI and Kaustic Plastik Roman legionary figures for a comparison to the HH and HY legionary. As with the legionary set, the box includes a one-page cautionary sheet. 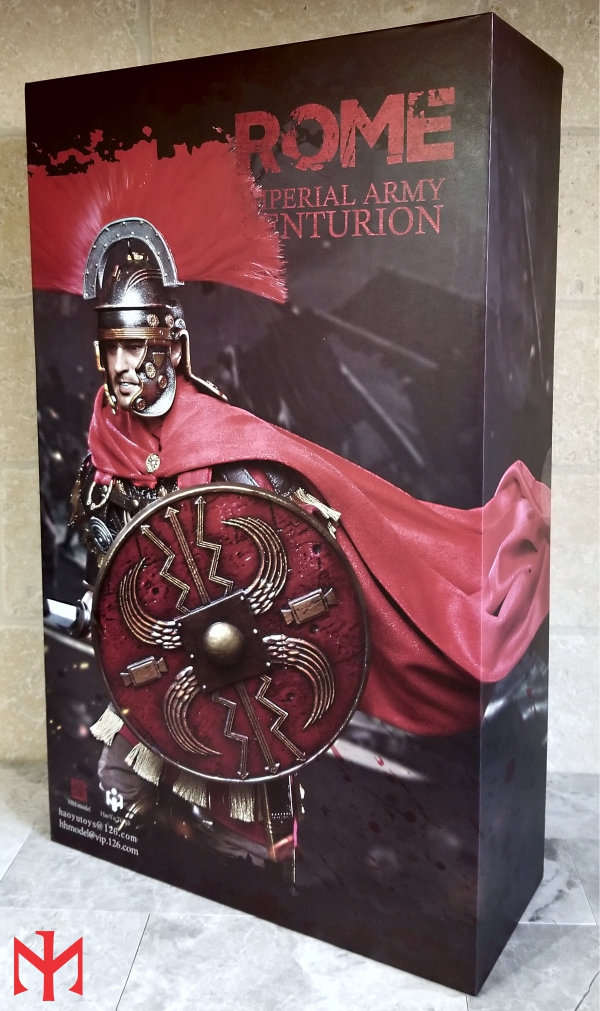 This category includes both the head sculpt and the various sculpted or molded parts of the set. The face bears some possible resemblance to Gerard Butler (King Leonidas in The 300) and/or Michael Shannon (General Zod in Man of Steel). Perhaps it's just the beard; or the agitated, toothy grimace. I am not aware of who in particular (if anyone) the face is supposed to be, so I cannot judge whether it succeeded or not. Nevertheless, the sculpt is very good and seems a little more realistic than the one that was selected for the legionary figure. I might have preferred a more neutral expression, but it doesn't bother me much. The figure stands about 12 in (31 cm) tall, slightly taller than the legionary that preceded it in the line.

The other sculpted or molded items are all very well done, with plenty of fine detail on the decorations of the armor, weaponry, and military belt. The longer shield is sculpted in such a way as to convey the natural surface of wood, much like the one that came with the legionary; the smaller round doesn't have as much detail on the inside; both are finely executed on the front side. The detail on the phalerae (circular metal disks affixed on a harness over the centurion's chest and abdomen) is excellent, as is that on the helmet, on the belt plaques, on the greaves, and on the rather delicate gold-colored double hook for attaching the shoulder flaps to the chest (in fact, it hangs magnetically from them) and even more delicate torques. The vambraces feature an incised image of a "Roman" eagle (it looks rather medieval, but then again the vambraces are fantasy additions to what is otherwise a fairly convincing historical figure -- see in more detail in the legionary review). The sword scabbard also features a little delicate sculpting, but to me it looks less impressive than its counterpart that was provided for the legionary. The vine staff is sculpted convincingly but appears to be a little too short. As with the helmet that came with the legionary figure, it is missing the loop handle at the back of the neck guard, although it was designed to be there (this appears to be the case with all sets, not just mine). 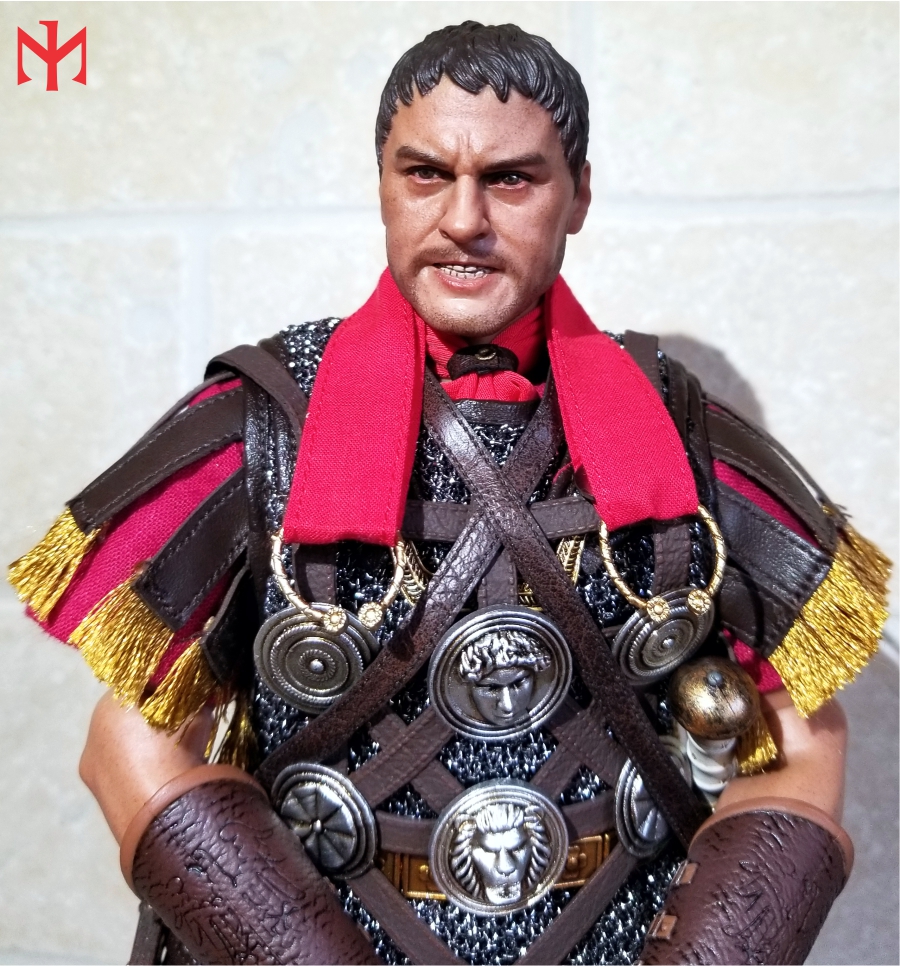 The paint application is generally very good, although I was a little disappointed in the sword's scabbard (which looked more poorly painted than worn) and the inside of the smaller, round shield. On the outside of the shields, the smaller round shield is given a perfect, realistic look, whereas the larger shield seems painted a little too impressionistically to look convincing for a Roman shield. The vine stick and hair are given a perhaps overly flat paint job in brown, but on the other hand, the face and eyes are painted beautifully and realistically. The painting on the helmet and vambraces is impeccable, which is impressive, given the small details involved. As with the legionary figure, which has the exact same footwear, there are some minor imperfection on the straps of the boots (caligae), a common problem with strapped footwear that is sculpted with the foot. 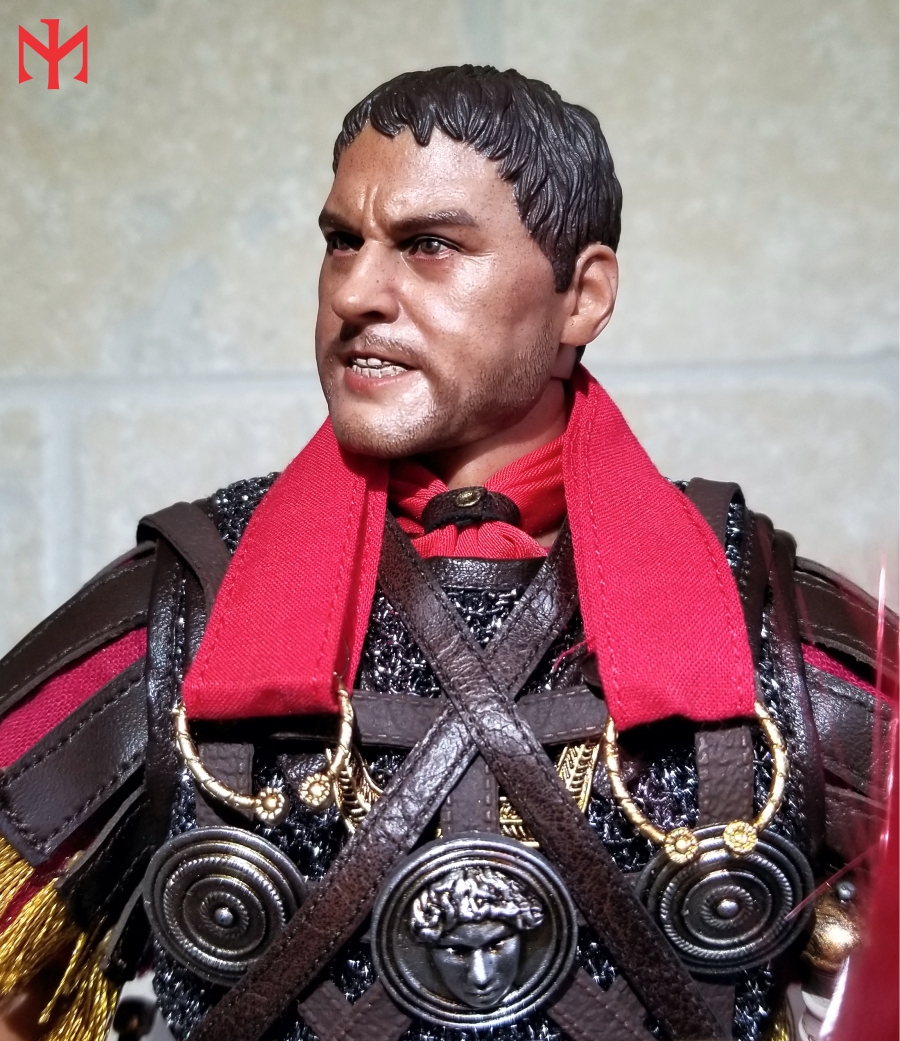 The product utilizes the CooModel body (or something based on it), which allows for very good articulation and reasonable sturdiness. Despite the heaviness of the cast metal and plastic elements, the overall articulation is not overly impeded. Unlike the legionary figure, there is no stiff armor to restrict even the ab crunch here, so the centurion is even more poseable. The legionary can take wide stances, sit, kneel, raise his arms fairly far, etc. The only obvious improvement would have been double-jointed elbows, but I suppose appearance won over articulation, as it did with the legionary figure. 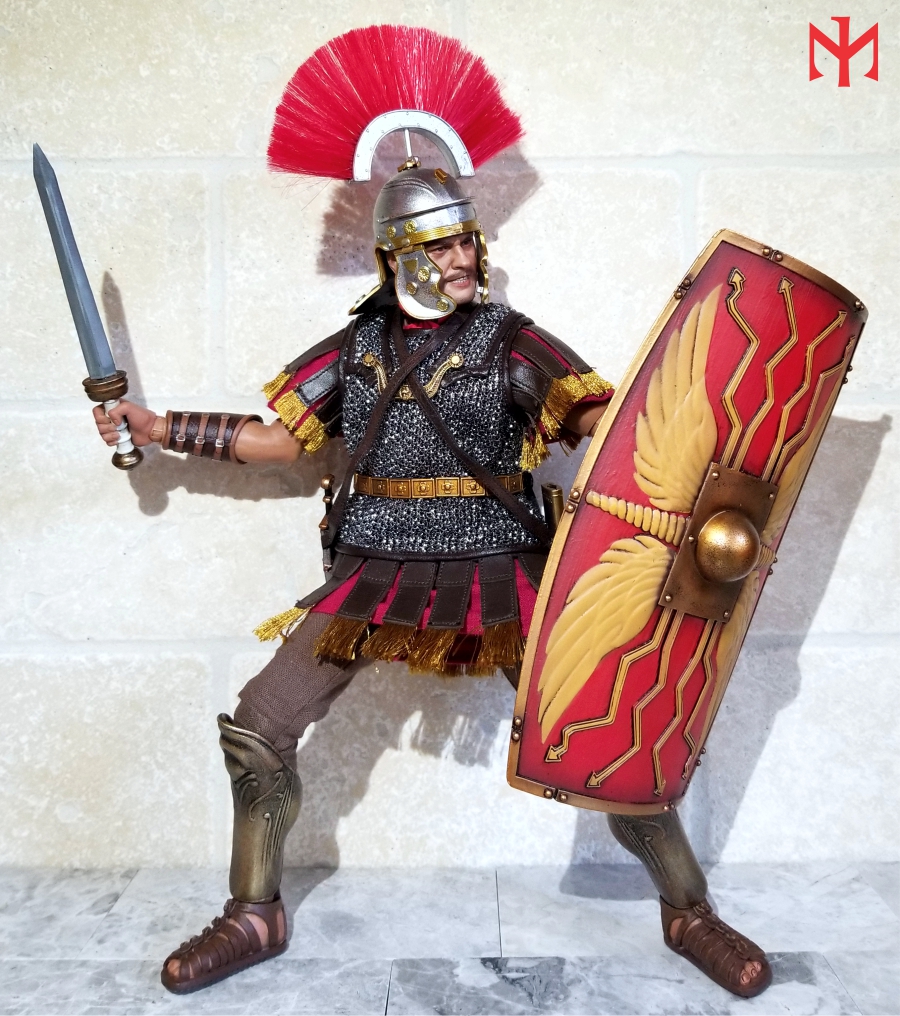 The Roman centurion comes with the same action figure stand, decorated with an image of a Roman eagle above the acronym SPQR, as the legionary. There are also four extra hands, making a total of six: a pair of relaxed hands, a pair of grip hands, a slightly different right grip hand, and a left fist. Then there are the dagger (pugio) and the sword (gladius), both with metal blades fitting into scabbards, each of which is suspended from its own baldric. There is also the vine staff, which is a bit undersized. I have already mentioned the easily-removable harness with the seven phalerae, the double hook which attaches to the chest via magnets, and the delicate plastic torques suspended from a strap of cloth worn around the shoulders. ACI did those better, from soft metal (as did Kaustic Plastik, but theirs could still snap easily). The choice of lightweight and probably brittle plastic was a poor one -- I feel that they could easily break, and moreover they do not hang naturally. I resorted to magnet magic (made possible by the magnet already in place for the double hook), slipping a couple of small magnetic disks into the cloth. There are two shields (although the promotional images only showed one, the round one): one is smaller and perfectly flat and round, while the second is a larger curved rectangle, but with curving lateral sides. In popular culture the legionary shield is normally imagined as a curved rectangle (like the one that came with the legionary), but the present shield seems to be more representative of the most widespread type used in the Roman army. The helmet and its transverse crest are two separate pieces, and you need to attach the stem of the crest onto the helmet (sliding it into the fitting from the front) -- or you can forego the crest altogether. 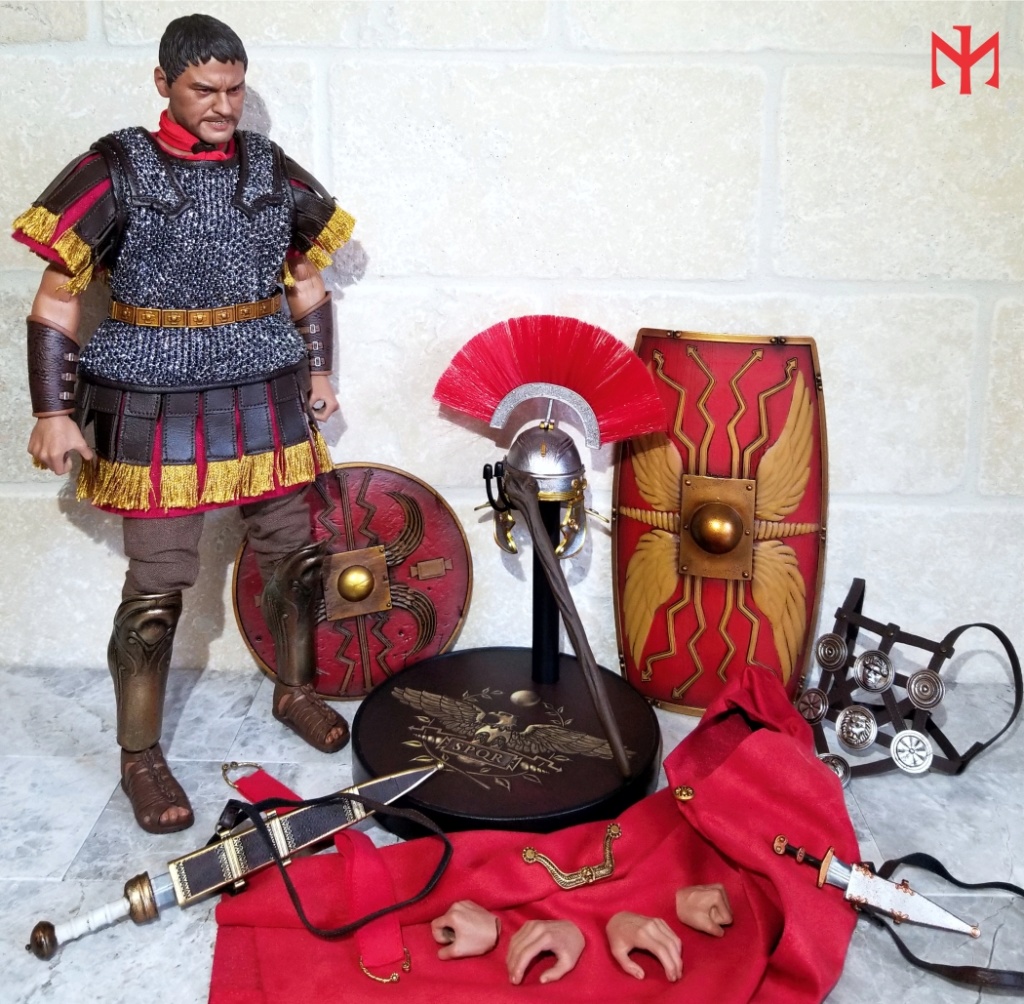 All the outfit items that come with the centurion set are very well made. These include the tunic, the military scarf (focale), and the cloak; all are given in stereotypical (but not historically universal or invariable) red. The "chain" mail corslet is actually made of silverish sheer fabric, with sown on brown leather (or pleather) straps (pteryges) ending with gold-colored tassels. In reality, the leather pteryges would most likely have formed part of a separate garment worn under the mail corslet.

As with the legionary figure, the centurion also comes with pants (braccae or feminalia?), which are a little out of place if the centurion is going to wear greaves, as he does here. The problem is that by the time pants were adopted as standard legionary equipment, even centurions had stopped wearing greaves (some cavalry units do appear to have worn both pants and greaves, but that is a different story).

The centurion has been outfitted with vambraces on both forearms (the legionary only had one, on the left forearm, since the right was covered in his case by the rare but less fantastical manica). This type of equipment is the result of giving in to screen fantasy and aesthetic preferences over historical evidence (only archers appear to have worn a vambrace, on the hand holding the bow). Unlike the vambrace that came with the legionary and was made of leather (or pleather), the centurion's vambraces are made of molded plastic; they are very finely sculpted and painted. I suppose those of us striving for historical accuracy could easily remove them as needed.

Finally, there are the Roman military boots (caligae), same as with the legionary (see that review for details and the image of the sole). 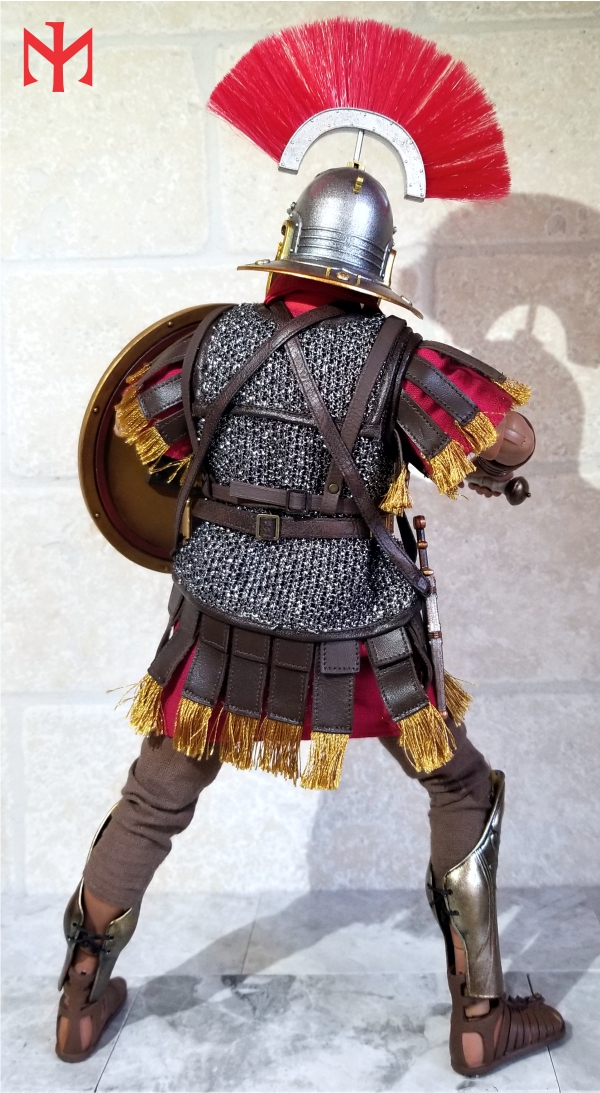 Like the legionary before him, the centurion is is generally well executed, well articulated, and fairly sturdy, which makes him a good figure to pose and display. And since the legionary is already out there, the two can interact, team up against vile barbarians (Kaustic Plastik has produced a couple of Roman-period Celts), or the centurion could scold the legionary for improperly tied caligae-laces or what not. These figures do integrate well enough with earlier Roman military personnel produced by other companies. 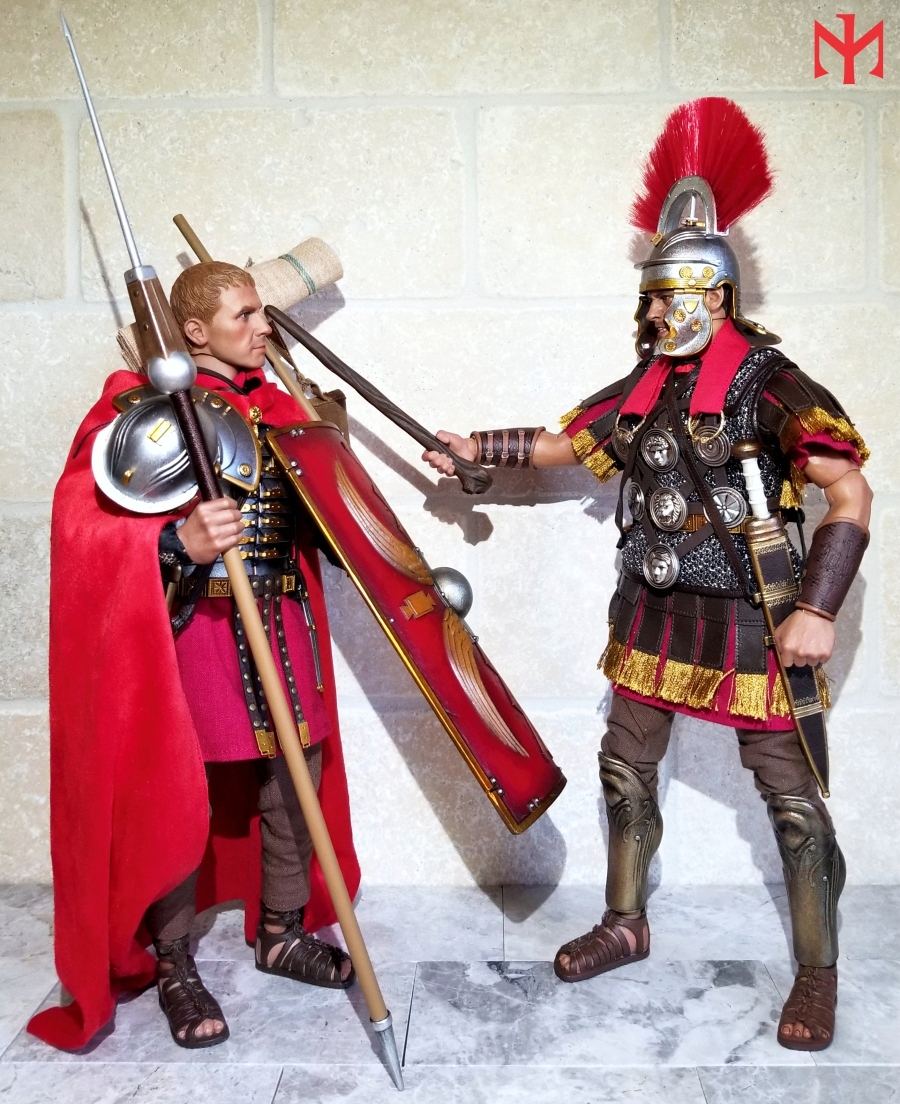 As I wrote about the legionary figure from this line, retailing at $200 and not being a super-popular licensed character from the leading blockbuster of the year, this is not a low-cost product. On the other hand, it is a very good one. While it has fewer regular accessories than the legionary (also one less weapon, but then again one more shield), the centurion comes with more "bling," allowing for more variation when it comes to display. This sweetens the deal somewhat, and since this is an officer, you will probably not "need" to pick up more than one (the way you might be tempted to do with a rank and file soldier). 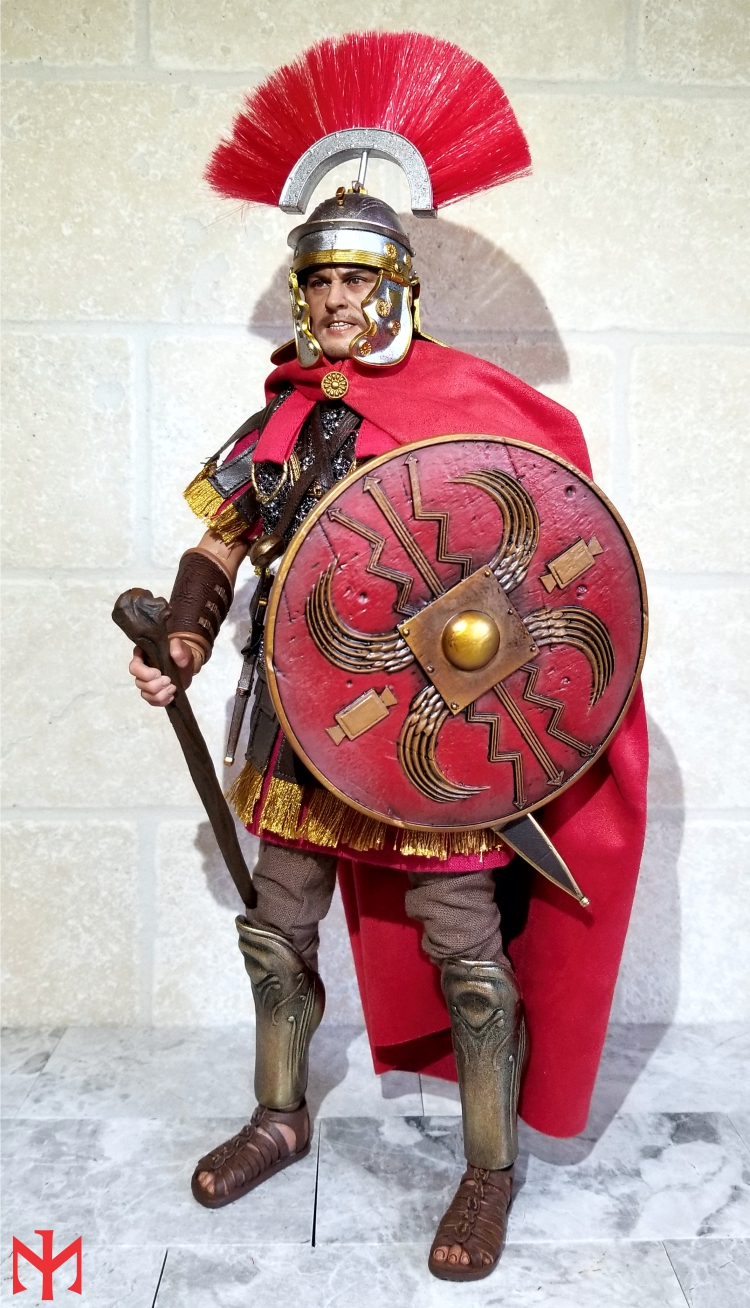 Generally, very little, just apply the same amount of caution that is always appropriate for handling higher end collectibles of this type. The only thing that made me nervous were the little plastic torques which I didn't want to break. Although I was too lazy to do it myself, it is always a good idea to use a hairdryer (or hot water) to soften the plastic of the hands before swapping. Unlike some other companies, HH Model and HaoYu Toys have not provided spare parts for products in this line (if you do break a wrist peg, your natural choice for replacement would be CooModel, since that seems to be the body they used). 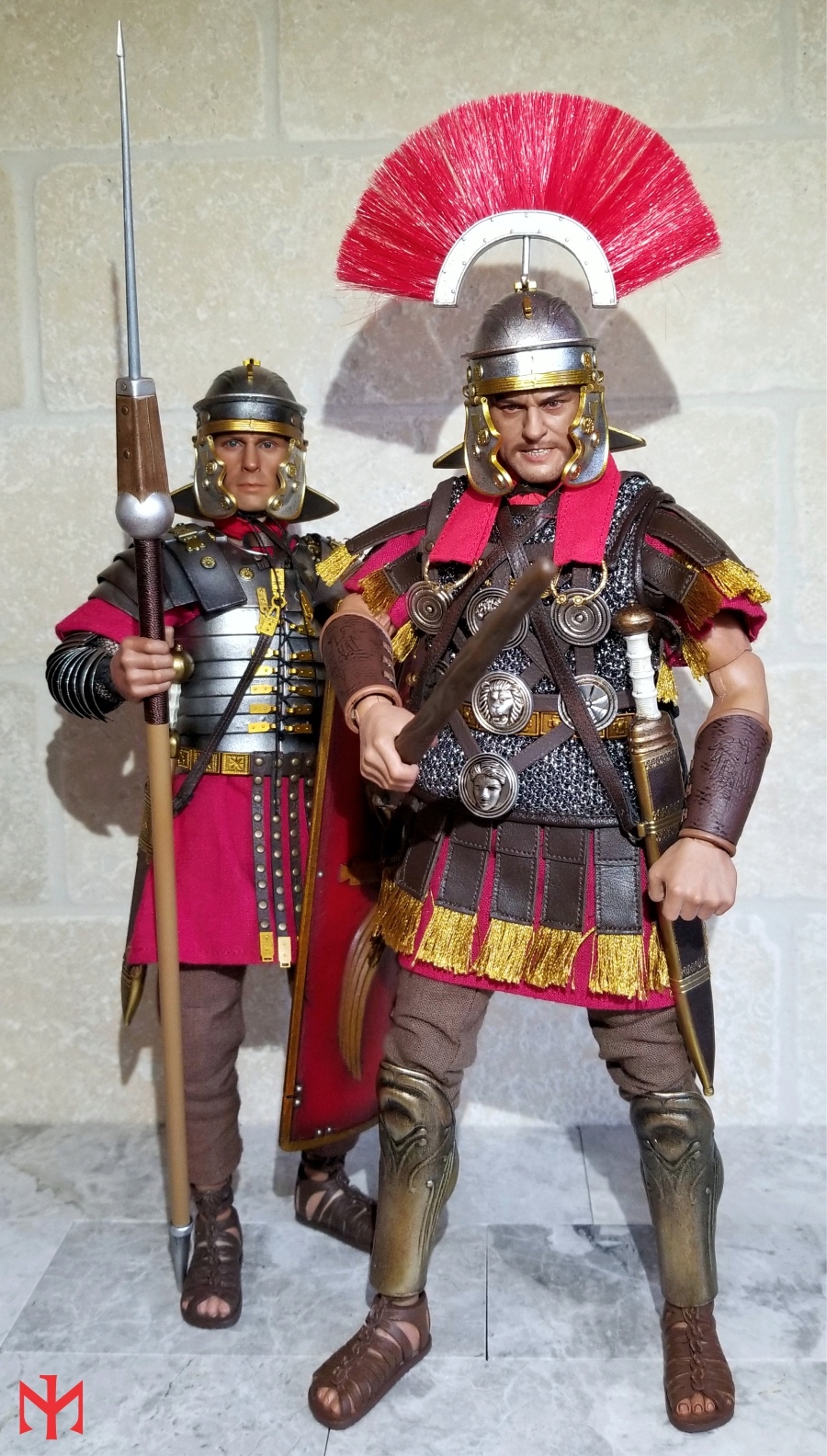 With all the variable options (cloak on or off, phalerae on or off, torques, vambraces, choice of shield), I found this figure quite fun. And it doesn't hurt that he has the legionary to play with... err... boss around. Without going as far as to declare this figure perfect or its price unobjectionable, as with the legionary, I am very pleased with the quality, sturdiness, and range of accessories in this set.

You can find it below or look for it on eBay. 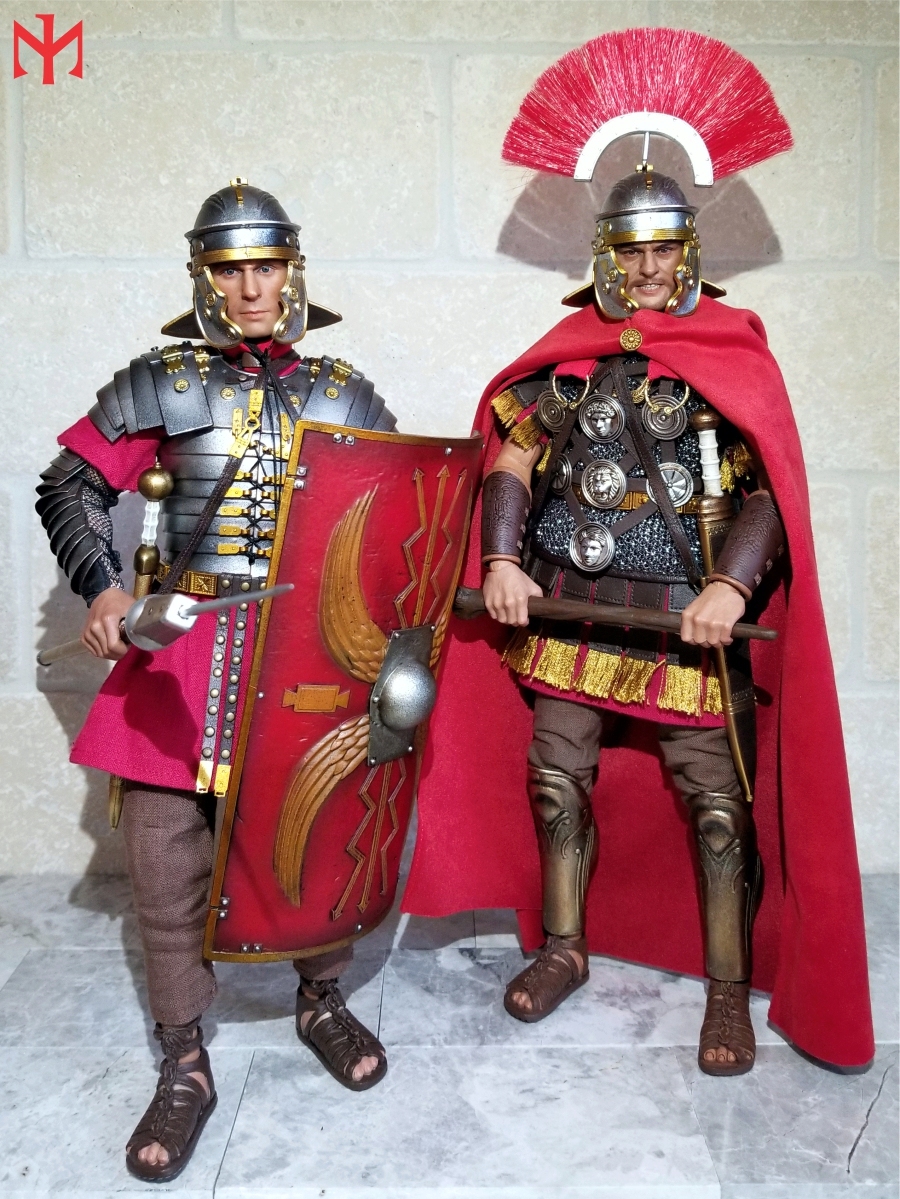 I hope this was useful and informative. What do you think? 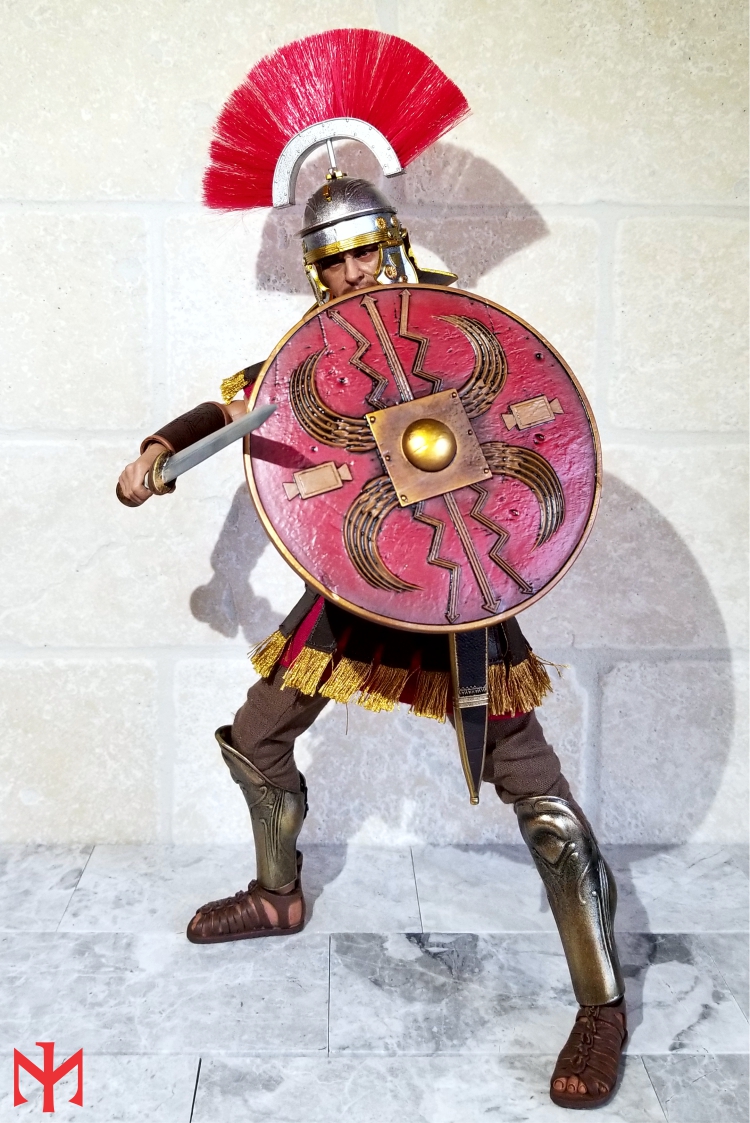