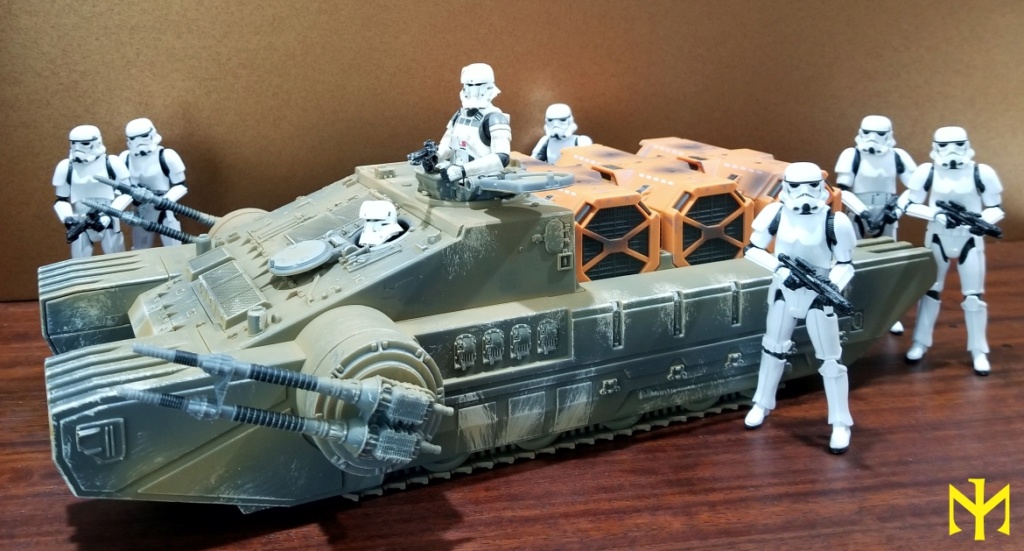 Introduction
Rogue One stands out from the other new Star Wars movies in providing a new look at the original, unsullied Star Wars universe that we first encountered and enjoyed all those decades ago. In that, it is arguably the best Star Wars film since The Return of the Jedi, if not since The Empire Strikes Back. And I know I'm not alone in that opinion. However, we should not overstate how good it was. It suffers from the facility and simplicity of the Star Wars universe, and further reflection has reminded me how many plot holes and inconsistencies occur in it (which is not to say that the Original Trilogy was entirely devoid of those). Nor am I necessarily in love with the new trooper types (even the Shore Troopers and Death Troopers) and ships to which we were treated, but it would not be a Star Wars movie without such expansion. Whatever the merits of Rogue One, this installment in the franchise has contributed to the appearance of plenty of Star Wars collectibles in various scales by various companies. The "classic" scale (1:18) put out by Hasbro has featured various characters from the movie, both before and after the return to "super" articulation for the action figures (mostly in the Vintage Collection, restarted in 2018). Hasbro has now released the Imperial Combat Assault Tank from Rogue One, which can supplement (or be supplemented by) their Assault Tank commander and driver figures, as well as the stormtroopers based on the film. 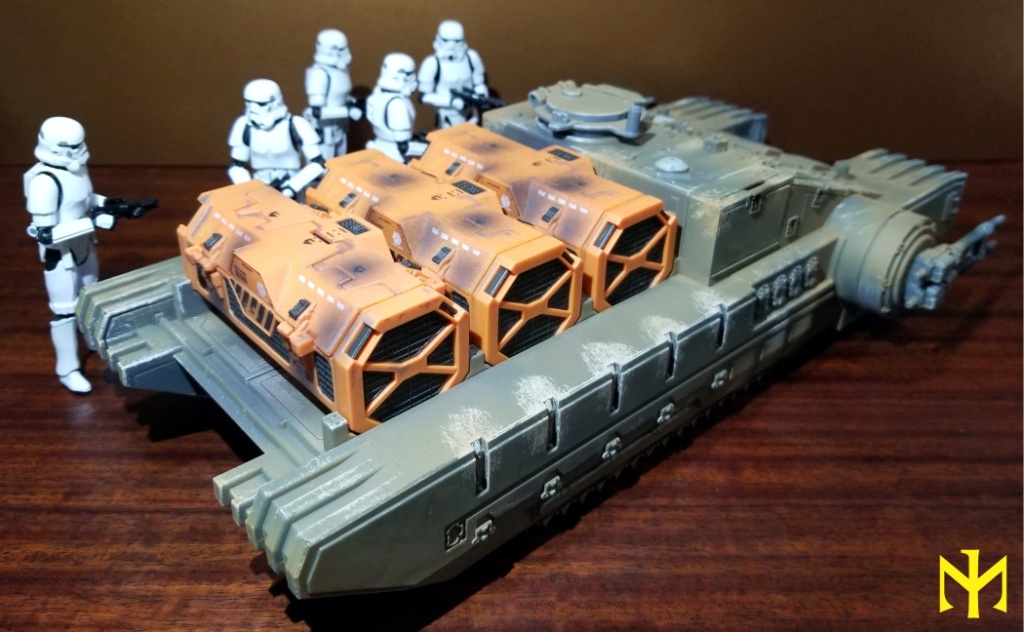 Packaging
The Combat Assault Tank comes in a basic cardboard box, amply illustrated with colorful images of the product showing off some of the features and how it "goes" with action figures in this scale. There is some assembly required (but not very much) and everything is neatly stored in the box (you do need to cut a few plastic restraints). One of the odd things about the box is that the illustrations feature older stormtrooper figures by Hasbro, which are visually different and inferior to the ones just released and are not in fact based on Rogue One; even if the new "super" articulated stormtroopers were not available for the photos, they could have used the excellently-sculpted underarticulated ones they already had instead. But anyway... 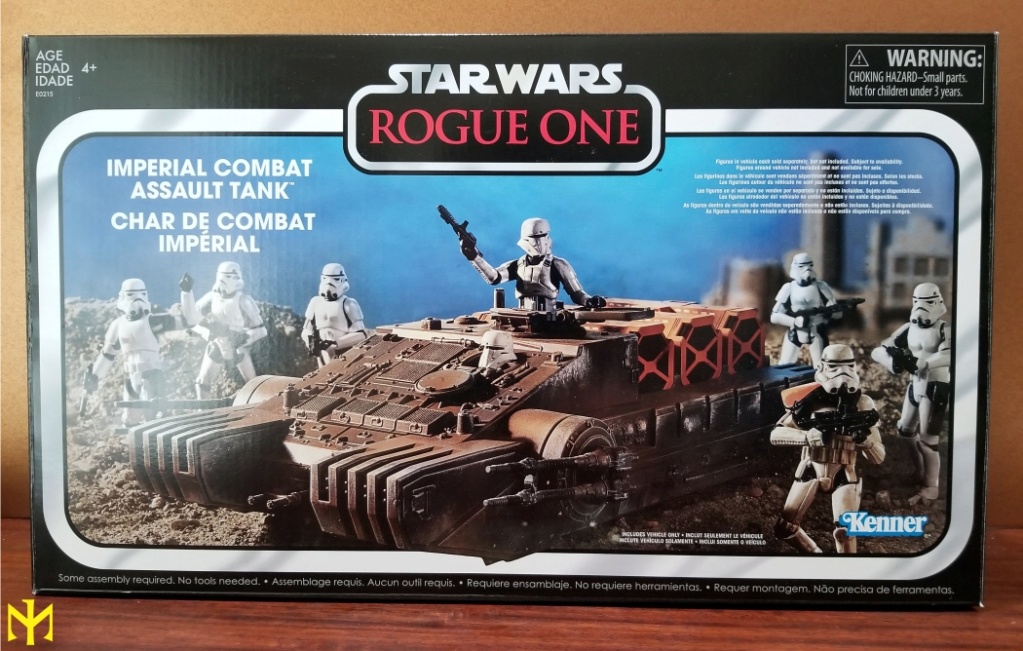 Sculpt
The tank is gorgeously sculpted in minute detail that is quite impressive for this scale. I have not had the chance to research this in any great detail, but everything seems done very accurately. The parts of the interior that are visible are given a possibly imaginary treatment, which greatly enhances the level of detail and the sense of realism. 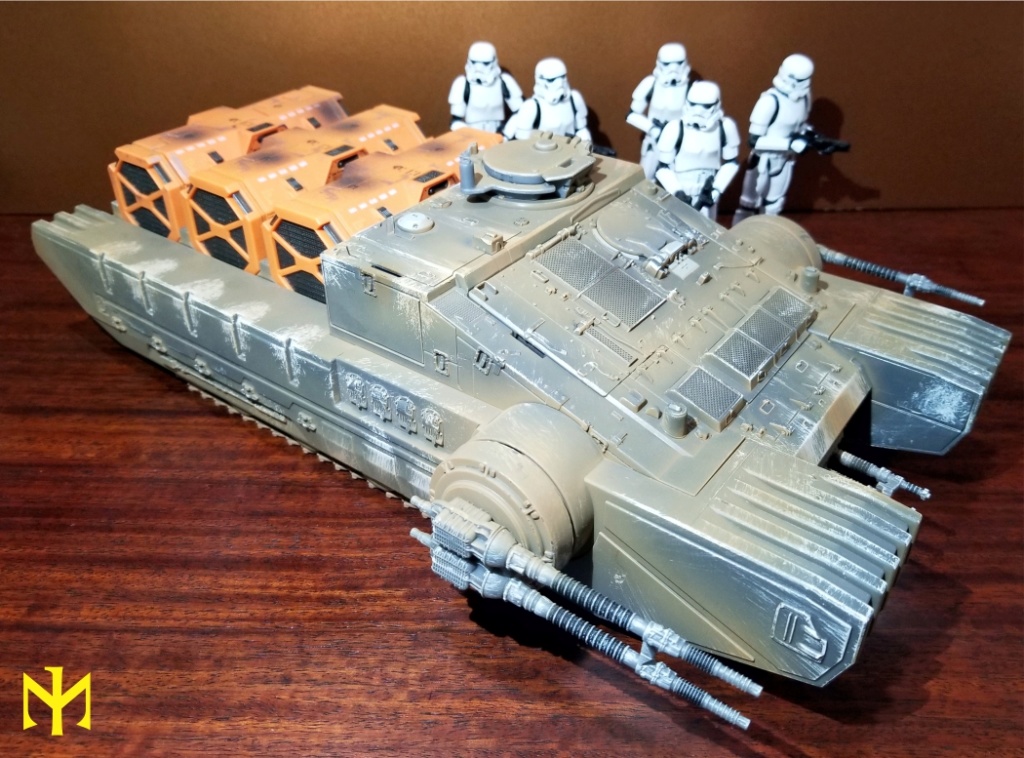 Paint
For a mass-produced toy, the Assault Tank is very well painted and weathered, looking like a fairly realistic piece of hard-wearing military equipment. There are various applications of color to suggest dirt, grime, and wear. Even the normally hidden elements are treated to some paint to suggest metallic machinery and grit. This detailing is extended to the three large containers accommodated on the back of the tank. A close look would reveal some imperfection or repetition, but on the whole the paint application is very good. 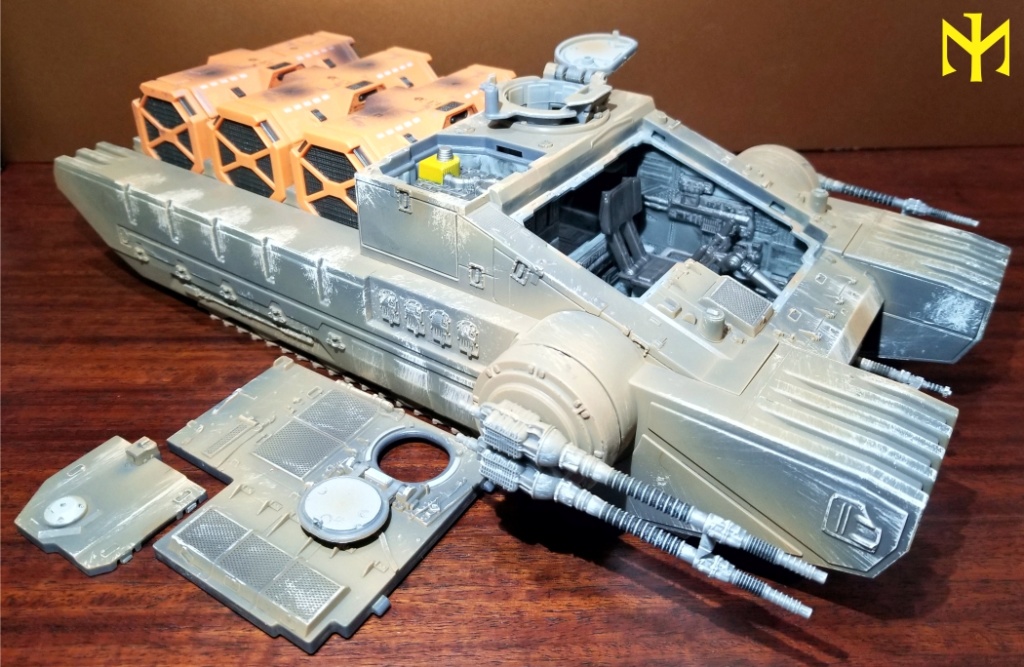 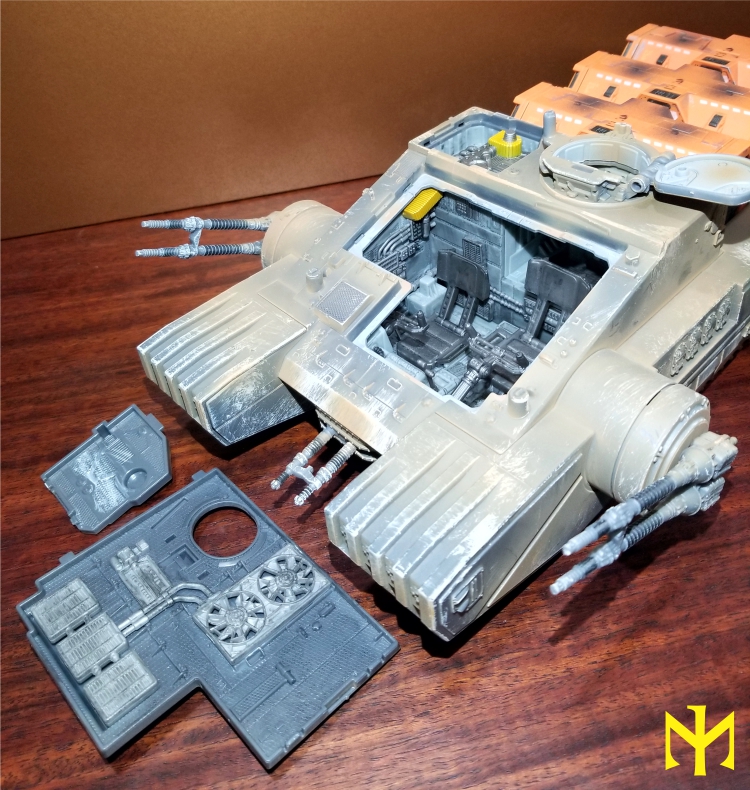 Articulation
The Assault Tank features several points of articulation and/or openable or removable sections. In terms of real articulation, the side guns can rotate around their axis, while the front gun can be aimed sideways (left to right); the hatch covers over the left-seated driver and the commander can be opened or closed; the continuous tracks can rotate around the wheels (although the wheels themselves do not appear to rotate); the left-seated driver's steering "wheel" can be moved a little, but it does not control or trigger any other function. Removable sections include that over the two drivers, and a portion of the tank's roof just to the right of the commander's perch. The three large containers stored in the back are removable, opening space for loading troops or other items, which can also be closed (forming a flat bed) with two doors that are otherwise stored on the inside sides of the cargo area. 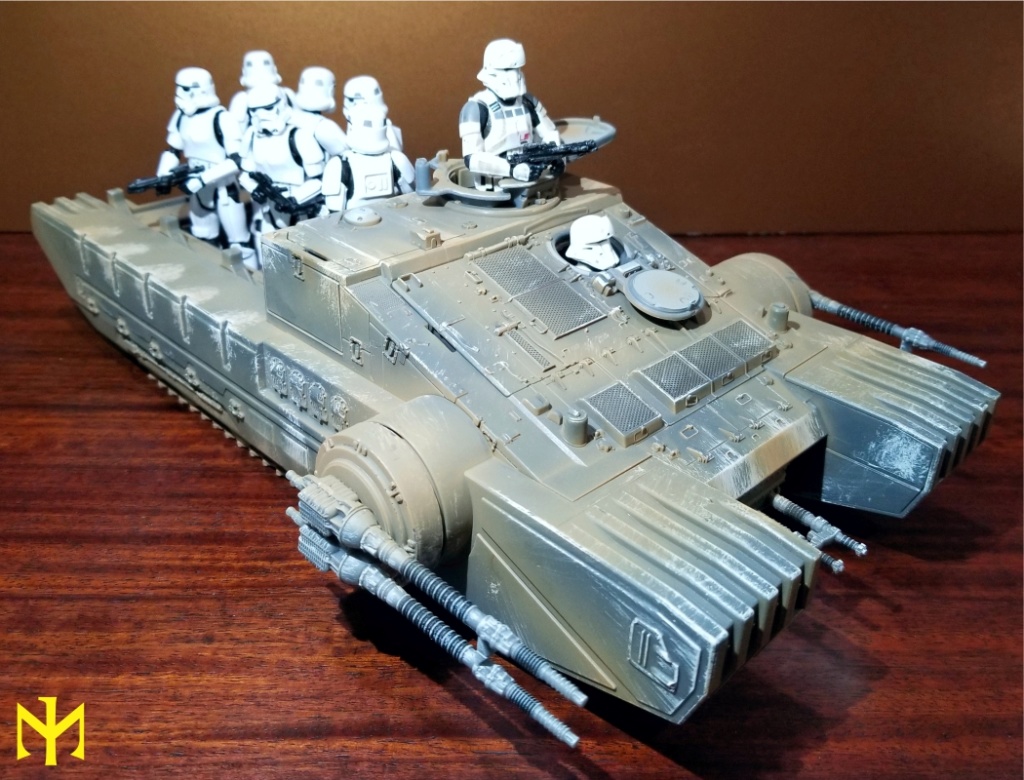 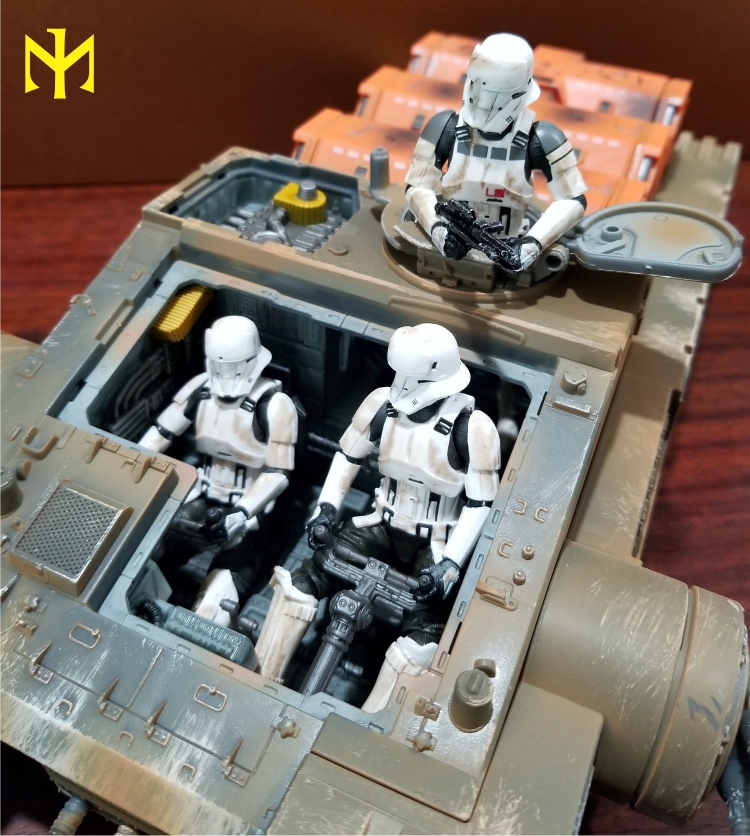 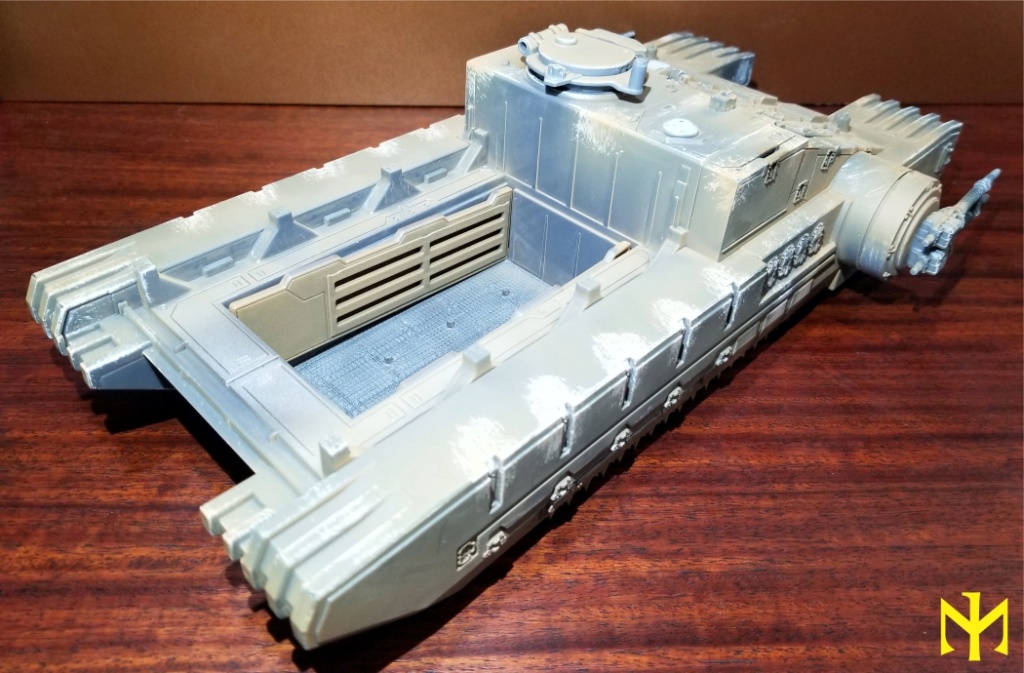 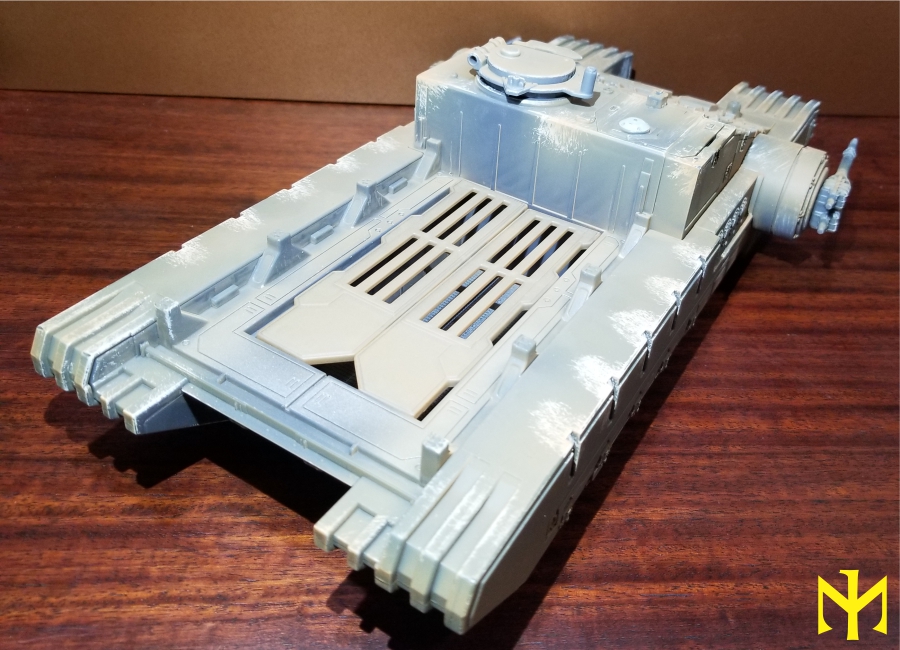 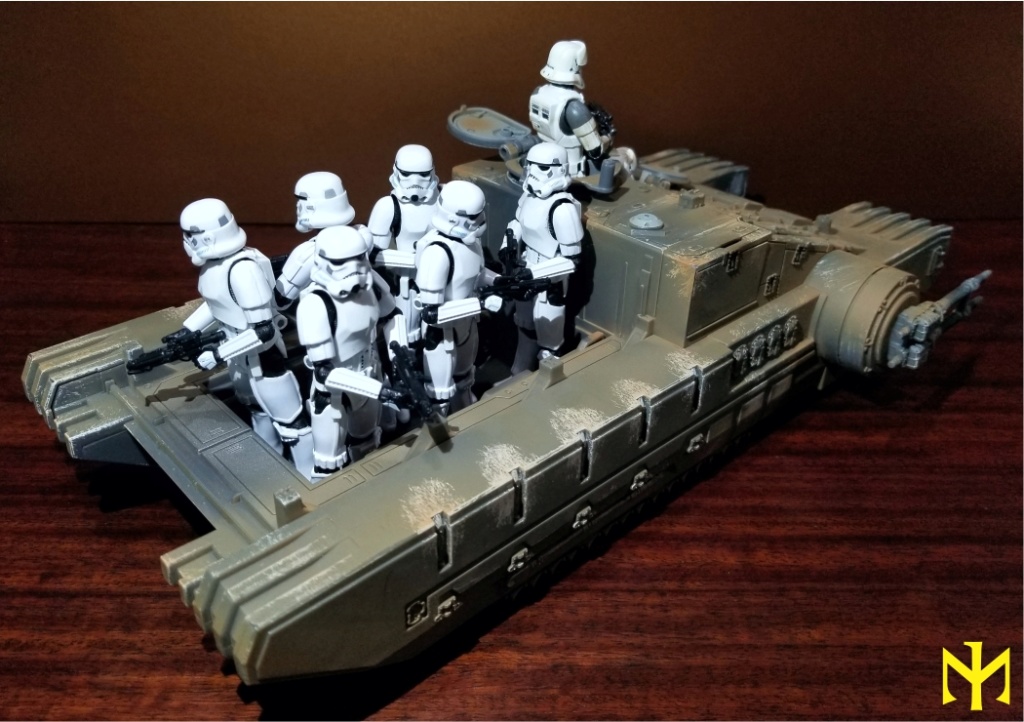 Accessories
I suppose the three large orange containers that come with the tank and fit into the grooves of the cargo area on its back can be considered accessories. They are painted in an orange color and given some detailing and weathering. All three have removable sides. One of the three also can be opened up along its top half, exposing a three sections of the interior, each containing three round holes into which are fitted cylindrical canisters. The canisters in the top section can be removed, and in fact can be opened up to expose the crystal bits contained within. This is pretty elaborate detail for a toy in this scale. 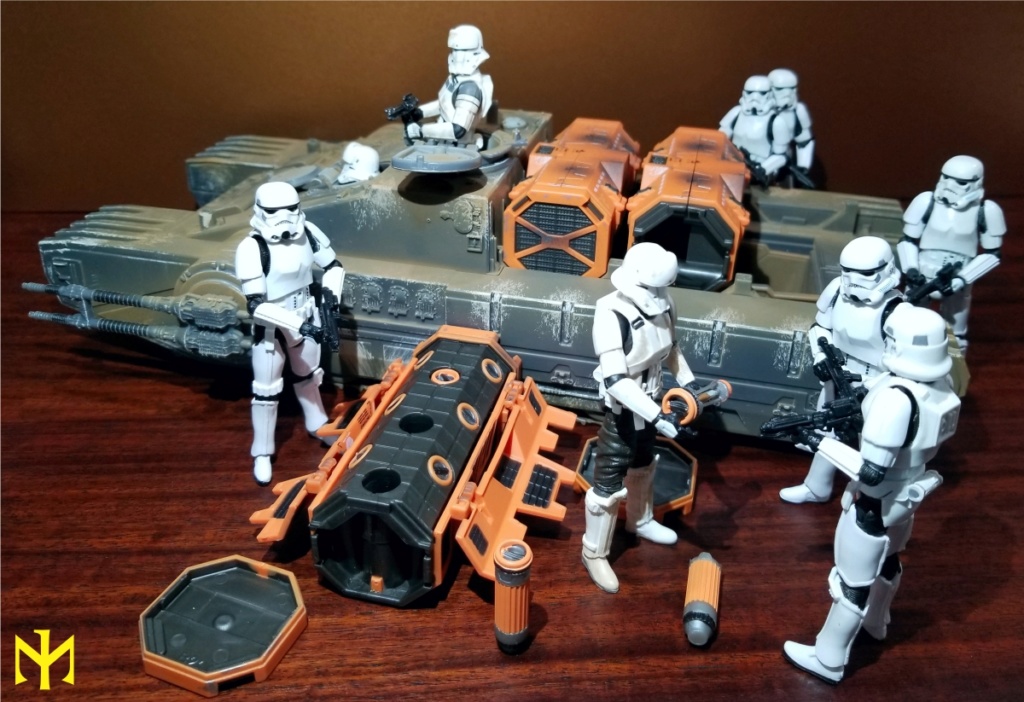 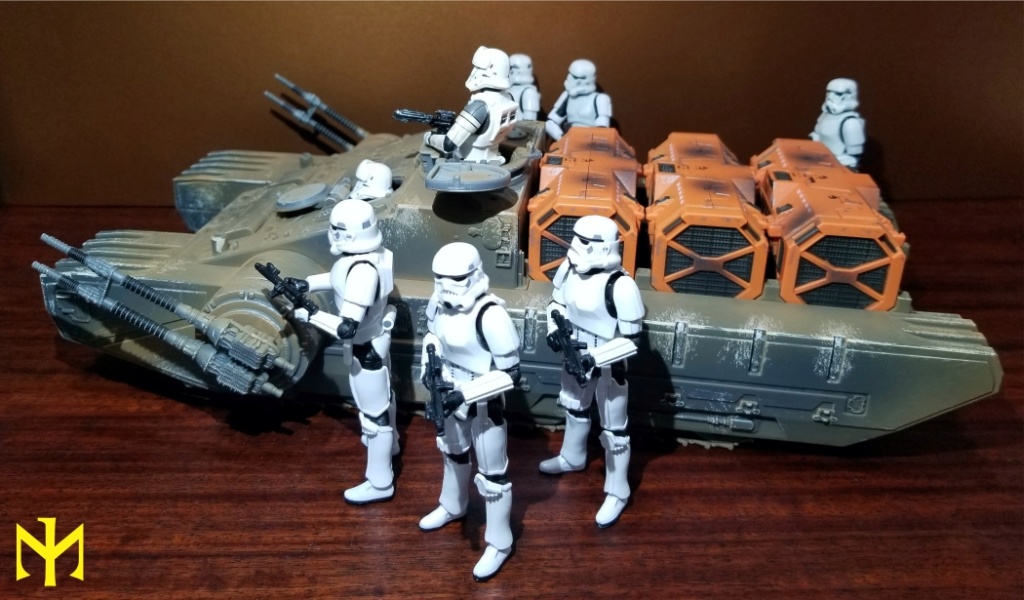 Fun Factor
The Assault Tank is a fairly sturdy, yet elaborately detailed collectible with plenty of articulated or removable pieces and a lot of interactive potential -- from placing in the drivers and commander to transporting or escorting stormtroopers and loading or unloading containers or what not. It works well as both a toy and a collectible. It appears to be at once decently scaled and conveniently compact. 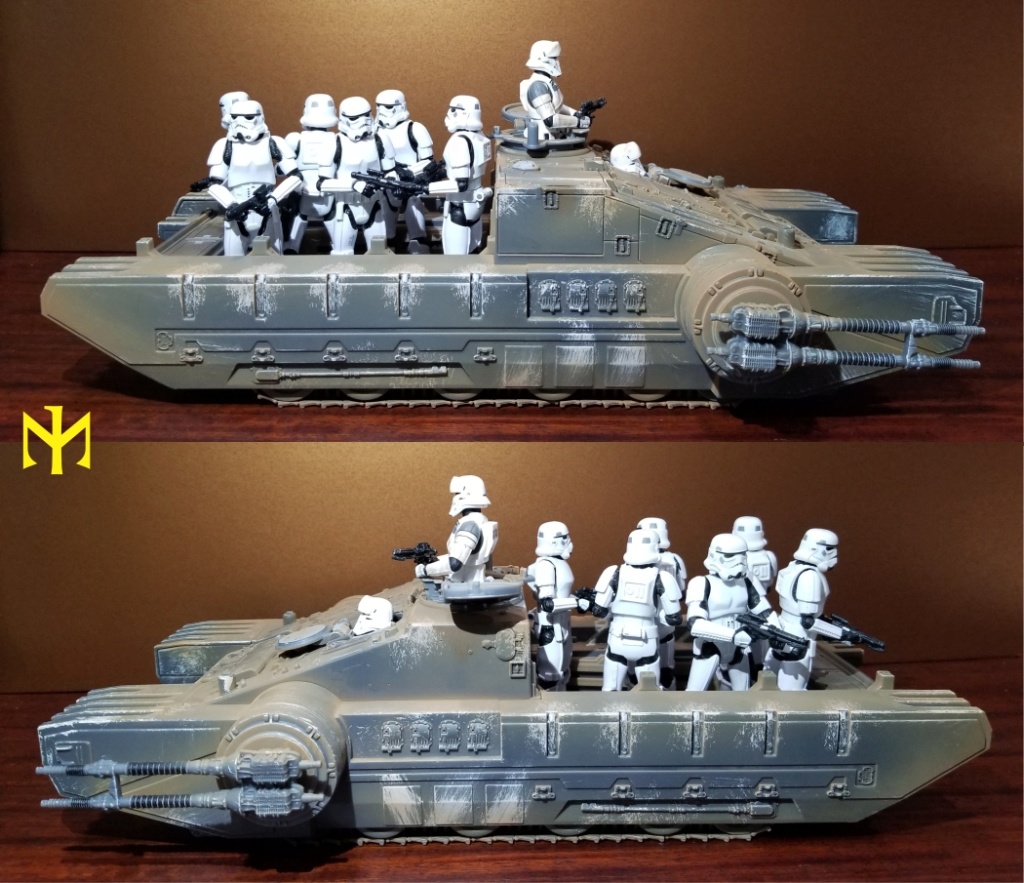 Overall and Value
Hasbro seems to be on a roll with their new vehicles. There are plenty I would not touch, either because I cannot justify getting a new version or because they are derived from franchise installments that I consider uncanonical (or outright anathema). But if we can judge by Jabba's Sail Barge (which I don't own), the Jabba palace playset (with parts of the Han in Carbonite chamber), and the Skiff, Hasbro's new (or reissued) vehicles are characterized by improved design, increased realism, and intricate detail (whether replicating the real thing or supplying imaginary details in areas that were never shown on film). The Assault Tank clearly belongs in this category with its detailed sculpt and paint work, and its plethora of interactive features and aspects. The price varies widely depending on venues and sales, ranging from about $24 to $80. The answer to "is it worth it" is bound to depend on the individual and on the price. If you want one of these in this scale, however, chances are that you will not be disappointed with this one. 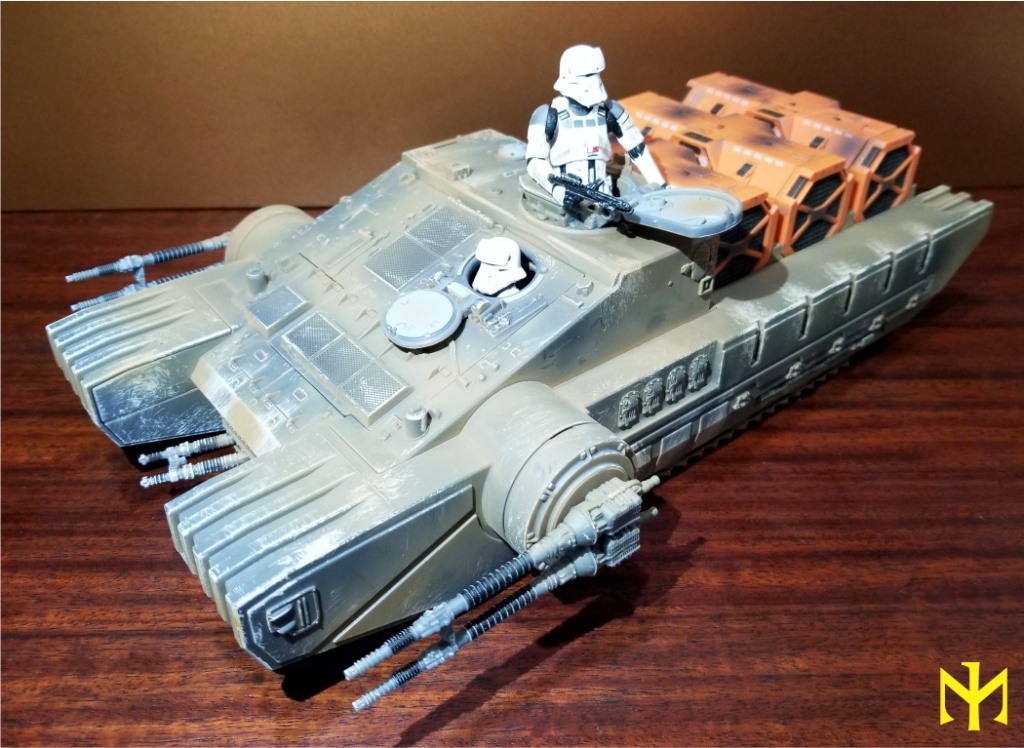 Where to Buy?
Look around in all the usual places (eBay, etc), or the following (for example) :

Hope you found this useful. What do you think?