Queen Gorgo is Star Ace's third product from the 300 movies, following upon King Leonidas and Themistokles. She also happens to be my first complete set from this series: I already had the Hot Toys Leonidas and only bought parts of the Star Ace Themistokles. You can find detailed reviews of the aforementioned products (as well as Star Ace's Leonidas) by Michael Crawford here: http://www.mwctoys.com/reviews-all.htm

The historical Gorgo (one of History's first recorded victims of creative and inconsiderate parents where name-giving is concerned -- who names their daughter after a gorgon!?) was the niece and wife of the brave Spartan king Leonidas (himself the offspring of an uncle-niece marriage). She was noted as an outspoken woman, whose good advice was ignored (by her father, for example, to his loss), and who dared to speak out among her fellow citizens. Then again, this sort of assertiveness was expected of Spartan women (to the dismay of other Greeks), and the sort of things she said inevitably reinforced the values and priorities of Sparta's militaristic society (e.g., "come back with your shield or on it!"). The historical Gorgo did not go on to lead Sparta's (largely fictitious) navy to decisive effect at the Battle of Salamis after her husband's death at the Thermopylai. Considering that 300 is about as historically accurate as its parody, Meet the Spartans, I suppose I should not really go down that path. In the 300 movies, Gorgo is portrayed by the beautiful Lena Headey, now better known as Game of Thrones' Queen Cersei.

The rectangular box opens its front cover to reveal the figure and its accessories in a transparent plastic tray, but you need to open the box from the top (or bottom, I suppose), to get to the goodies inside. Everything is pretty collector friendly. The outside of the box features what appear to be images from the highly stylized film, including Greek hoplites pushing Persian troops off a cliff into the sea, a hillside littered with skulls, and the signature blood spatter effect. All this is with a matte finish, but over it is superimposed a glossy still of Lena Headey as Queen Gorgo. As attractive as this is, in a way it backfires: it provides a glimpse at what the product should look like but it does not -- in terms of the actress' features and even her outfit! 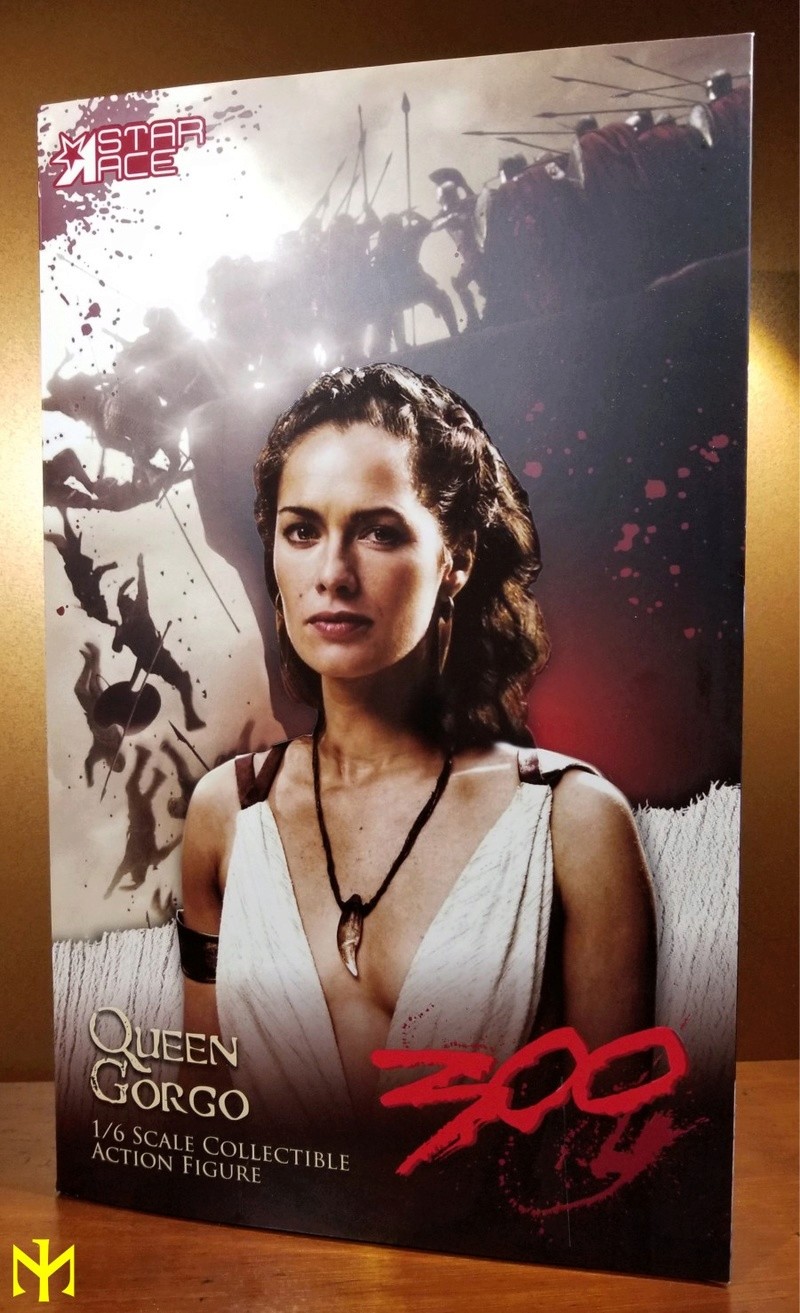 The face sculpt is nice enough in itself, but it does not seem to capture the features of Lena Headey very well. Despite an attempt to pay attention to detail (like the mole on the right of the nose), to my eyes it seems closer to Daisy Ridley (Rey in the Star Wars sequel trilogy). Looking at images of Lena Headey, it appears to me that the forehead is a bit too tall and vertical, and the face a bit too long. The hair is partly sculpted, partly rooted. The sculpted part of the hair is the front part, around the face. Unfortunately, it is made up of two parts, and the seam line between them is bit more obvious than it should be. The rooted hair is partly held down over the top of the head by sculpted braids, which was nice idea, but once the rooted hair clears the braids, it tends to jut out in an unrealistic manner. Perhaps with enough product one could get it a little more under control. The hair itself is wavy, which is a nice touch and an attempt to replicate the onscreen look. 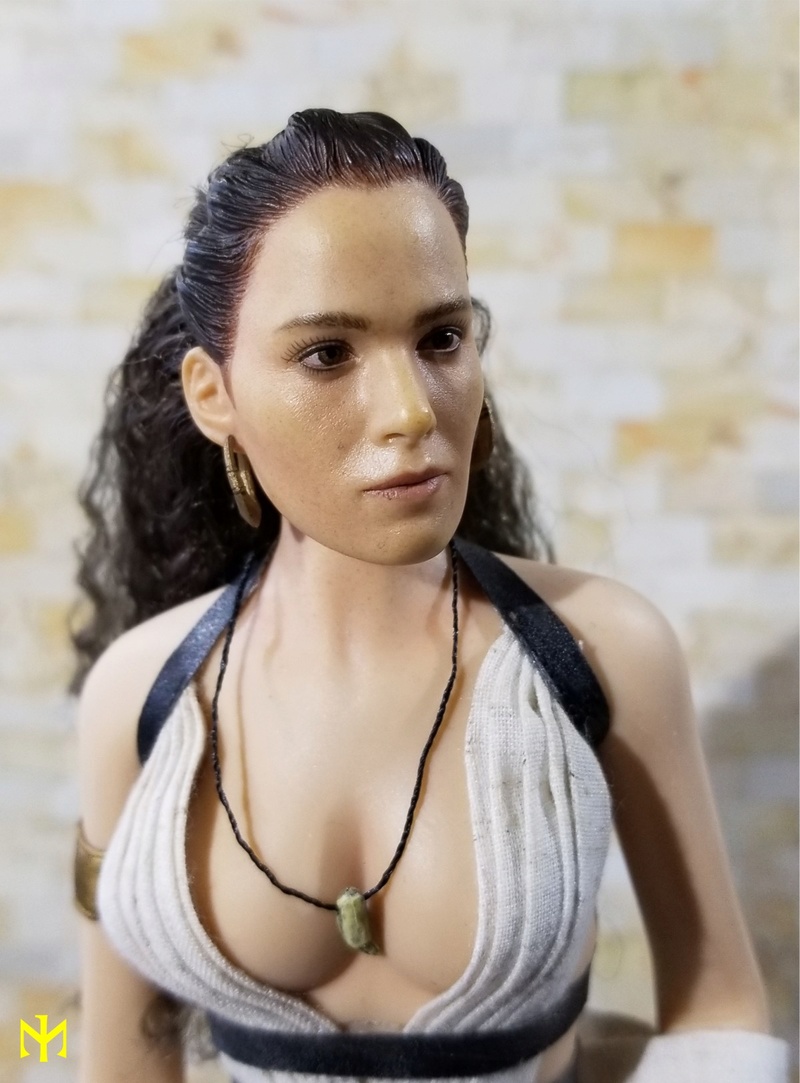 The toes of the sandaled feet appear rather naively sculpted, and there isn't much in the way of detail there or on the hands. The shield is pitted to make it look worn and damaged, but only in places, while the sword appears perfectly pristine. The body is partly seamless -- the upper torso including the breasts and arms is one piece, and the elbows and ankles are covered by the flexible rubbery material. While the overall shape is pretty decent, there is woefully little detail -- for example, the very pronounced and fine shoulder blades on the back are nowhere to be seen on the action figure. The seam between the upper and lower torso is quite noticeable every time the top pleather strap on the front of the dress slips down a bit, and that happens a lot.

The paint is uneven, with some areas very nicely painted, and others very basic or incomplete. The eyes are nicely done, though perhaps not as glossy as they might have been. The lips and eyebrows are very finely painted, though the eyelashes are a bit too simplistic/obvious, while at the same time failing to make the eyes as expressive as those of the actress. The face shows plenty of subtle paint variation and freckling, but that is not extended to the body, except perhaps for a little bit on the neck. Considering how much of the flesh shows, this is not enough. The finger- and toe nails are painted in a rather modern shade of light pink; I don't know if that is movie-accurate or not. The gold or brass color of the earrings and arm band are perhaps a tad dull, as is the rather flat brown of the sculpted part of the hair. Then there are outright mistakes: the face is painted a slightly warmer shade than the body, and the sculpted sandal straps are not completely painted: the narrow sides are left the same color as the feet.

The body has very decent articulation which, as so often, is limited by the outfit. Considering what the outfit consists of, this is quite the negative achievement. Shoulder, ankle, neck, abdomen, and waist articulation are great; wrist articulation is more limited. The elbows can bend to a 45 degree angle between upper and lower arm, while the knees can bed to a 90 degree angle between the upper and lower leg. The thigh articulation is more limited, at least in part because of the narrow lower part of the dress. Still, it would be possible to make the figure sit. Nevertheless, it is very difficult to give her wider stances. I do not know what were the functional limitations of the movie costume, but either its costumers or Star Ace are completely ignorant of the nature of ancient Greek clothing, which would have left a long (if concealed) slit on one side of the dress. A better-designed outfit and a better seamless body (like those by Phicen/TBLeague or Jiaou Doll) could have earned this category an easy 4/4. 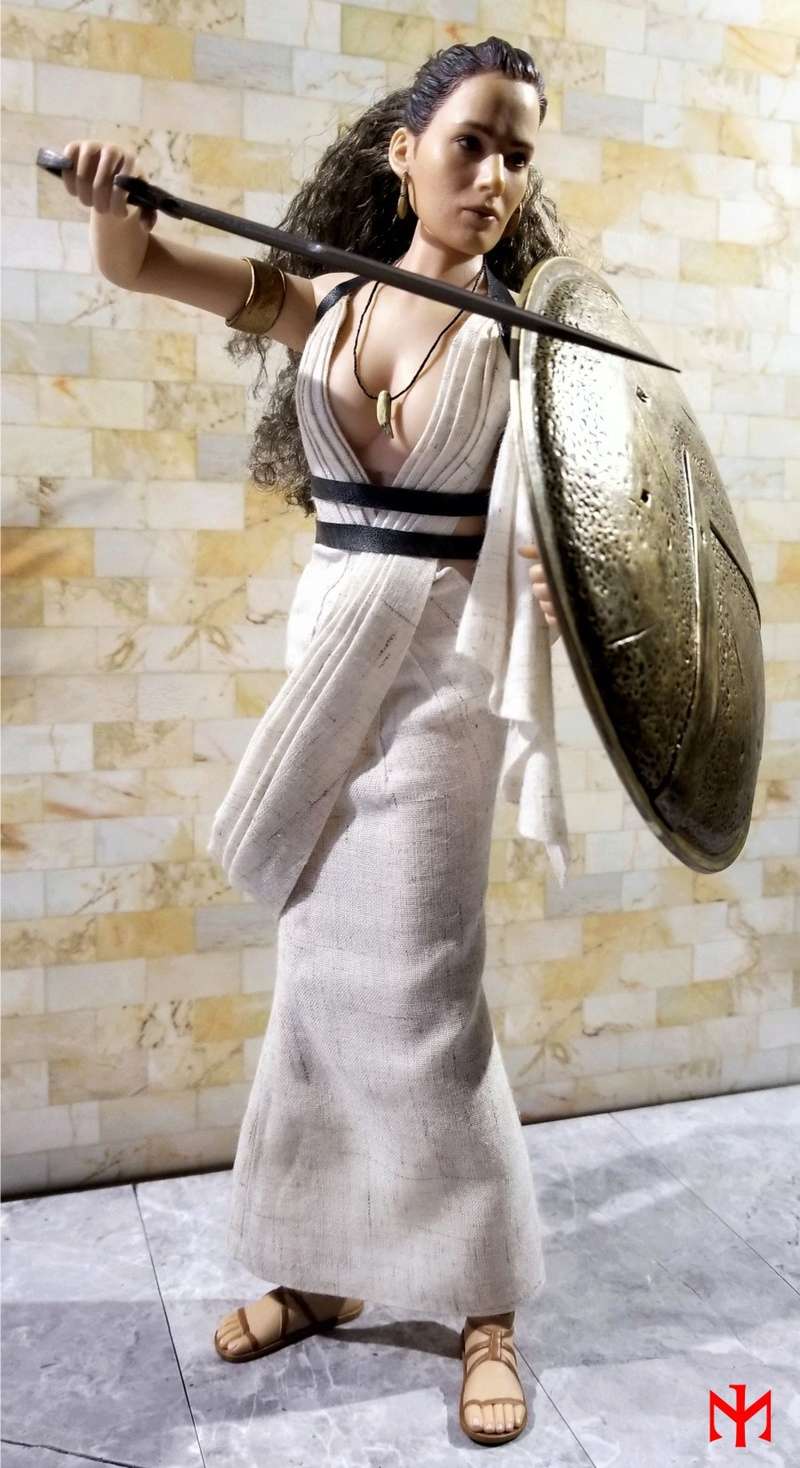 Onscreen, Gorgo does not have much in the way of accessories, so their scarcity with the figure is partly excusable. It also depends on your definition of accessories. There are spare parts: two extra hands, making a total of four (or two pairs) -- the relaxed hands she comes with, and the grip hands you can replace them with. There are a couple of additional items that form part of her costume but come separately in the tray: an arm band and a wolf fang necklace. There is also a standard base and stem action-figure stand with a waist-grip; the stand's base features the 300 logo. Then there are a sword and a shield of the same type as Leonidas'. These accessories are nicely sculpted and fit well into the grip hands, and the shield is easy enough to put on her arm (although its flat inner surface is historically inaccurate). The hands swap easily enough without the need for heating. 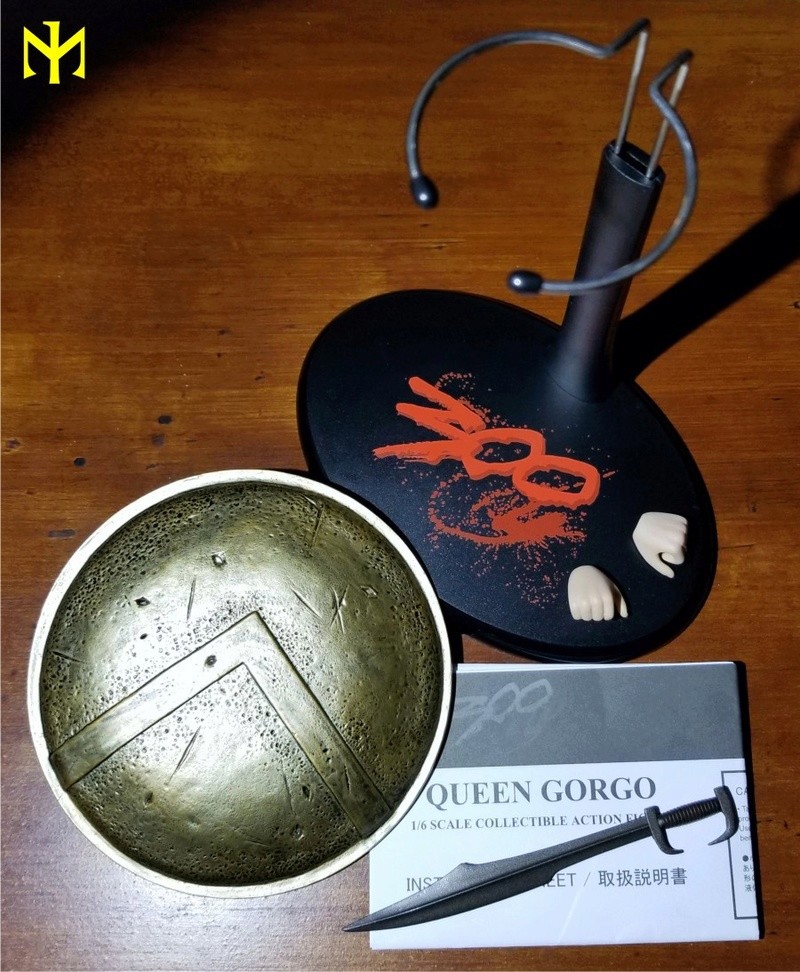 Gorgo/Lena Headey wore several similar Greek-ish outfits in the movie, not counting the battle-dress at her (fictional) involvement in the Battle of Salamis. One of these outfits is provided with this product. It is visually fairly accurate, and appears to be made of a linen or linen-like cloth. I have already mentioned the unfortunate tight fit of the lower part of the dress, which ruins the leg articulation. There is a long scarf-like extension of the dress that starts from the front left side of the waist, and is intended to wrap around the back of the dress and be held or wrapped around the lower left arm. To keep it wrapped in place there is a button, but additional futzing may be required to get it to "drape" in a more or less realistic fashion. This is all rooted in the film's unrealistic (or unhistorical) rationalization of Greek dress, where the dress (or tunic) itself would have been one piece, and the almost ubiquitous wrap (or fuller-scale cloak), another. Two pleather straps hold the uppermost part of the dress (also an unhistorical design) into place. The straps passing just under the breasts have the tendency to slip down and reveal the seam between the upper and lower and torso of the figure, requiring extra futzing. As mentioned above, you need to place the arm band and wolf fang necklace on the figure, which is easy enough to do. Another minor shortcoming: the wolf fang is so light, that the string it hands from does not hang realistically. 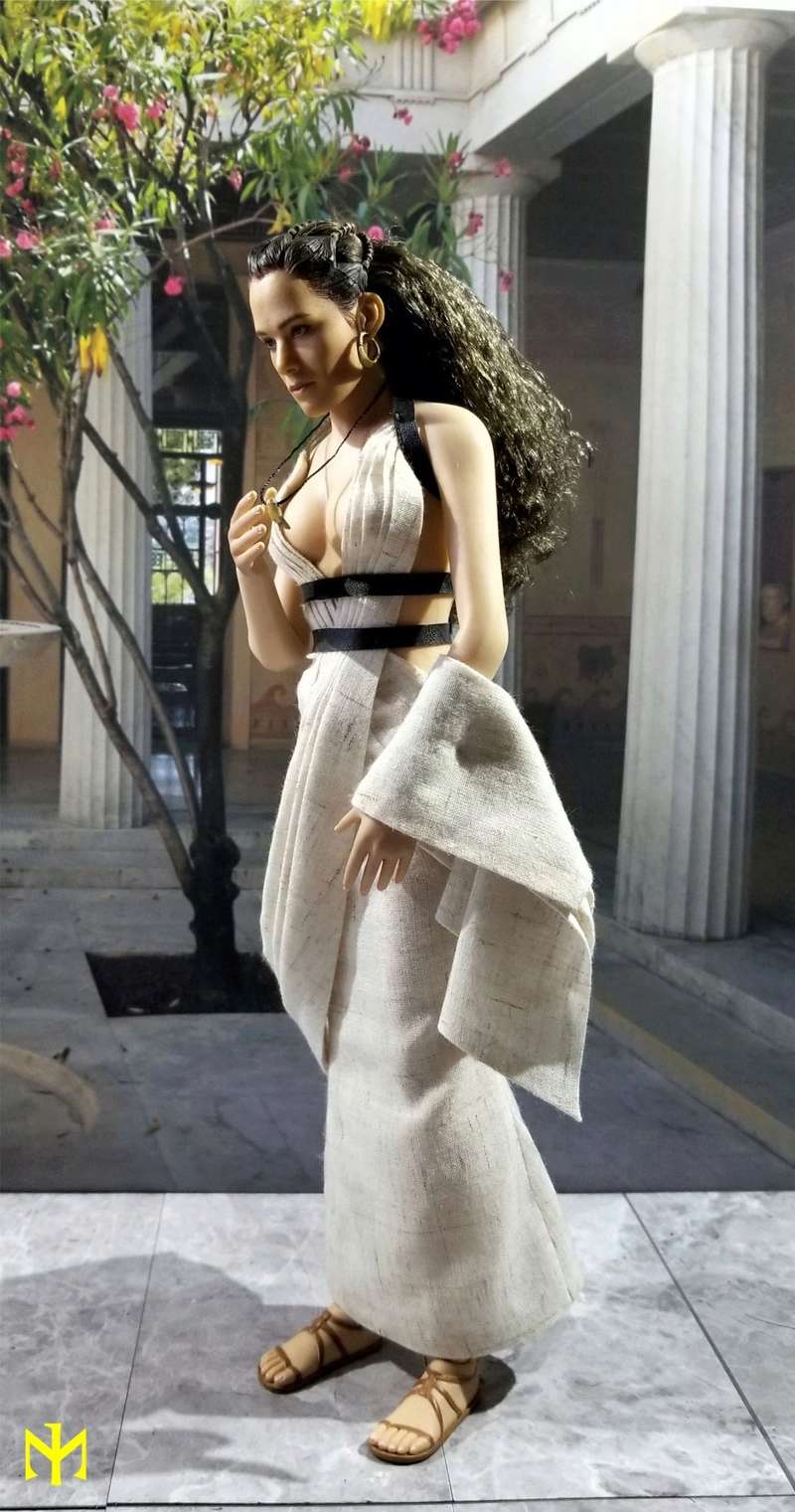 The articulation limitations get in the way of this figure's potential, but at least she has two buddies to play with: her husband (and uncle!) Leonidas (whether you go for the Hot Toys or Star Ace version) and Themistokles. Of course, a more accurate depiction of the actress would not have hurt. As far as mixing this with more historically-accurate figures (such as the ACI hoplites), that would depend on your tolerance for lack of realism or accuracy. Of course, Star Ace was depicting a movie character, not a real and realistic Spartan queen. 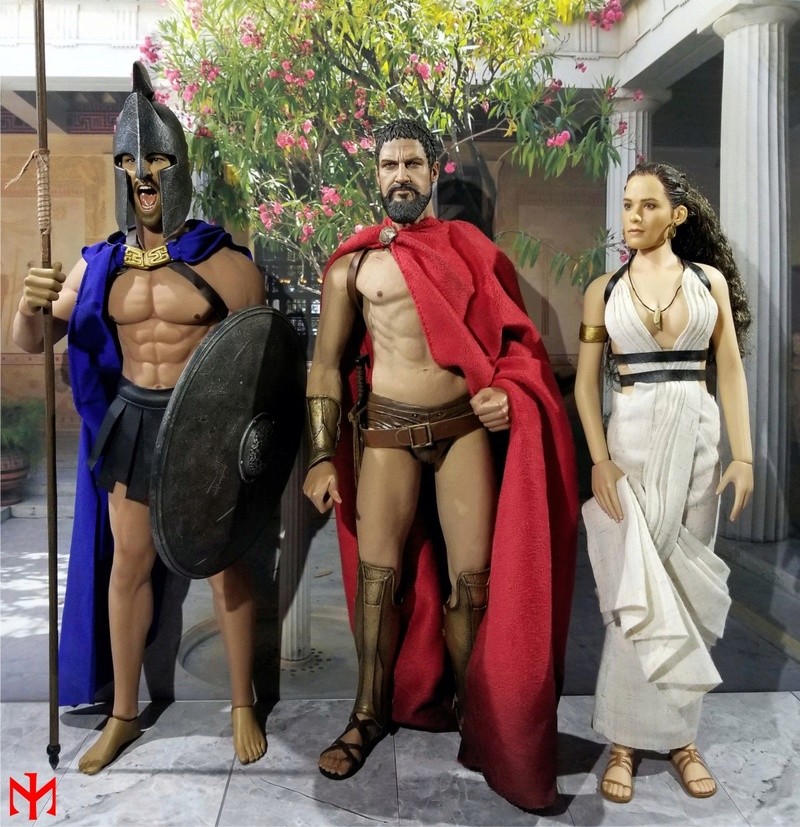 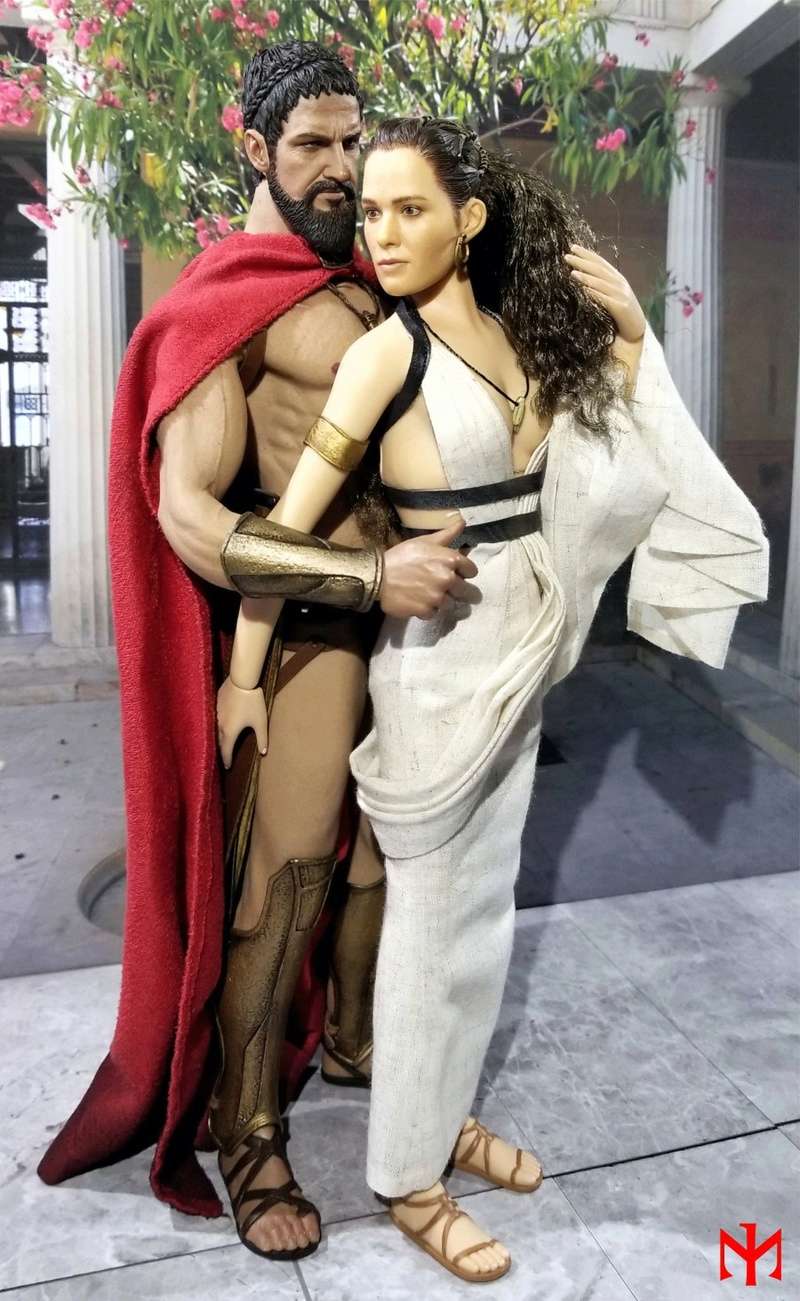 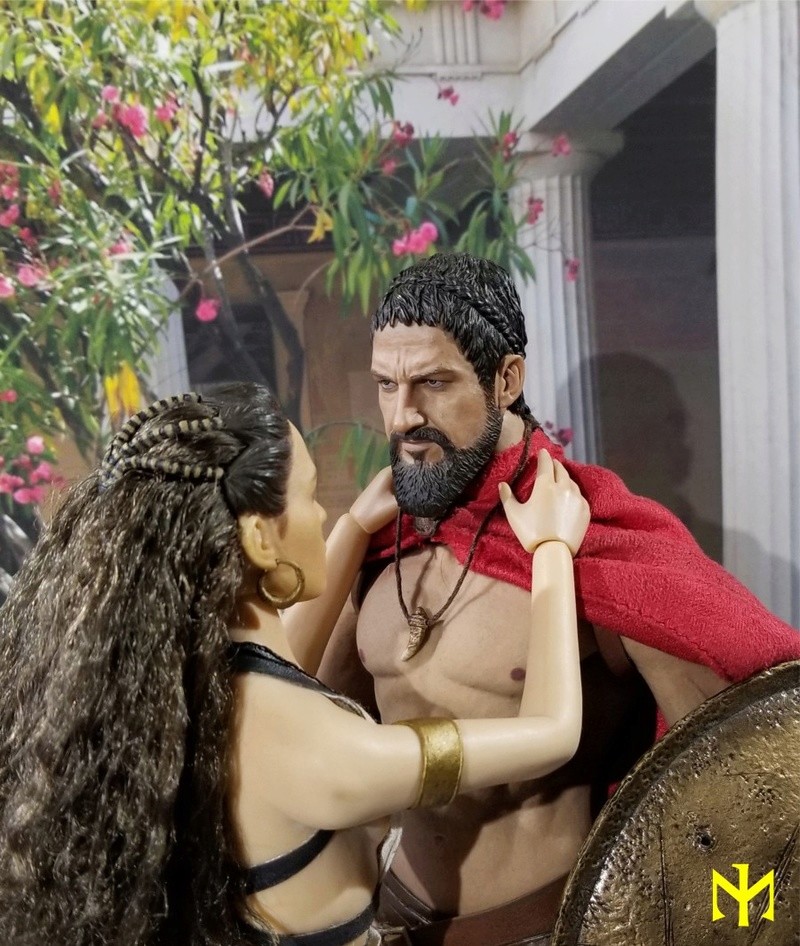 This depends on how much you pay for the figure. There are still places (check eBay) where you can find it for under $200, but they are few and far between; in most places she sells for $220-290. That is Hot Toys pricing, and even though Hot Toys itself is not always flawless, this product is not really in the same category. So, for the most part, I would say she is quite overpriced. 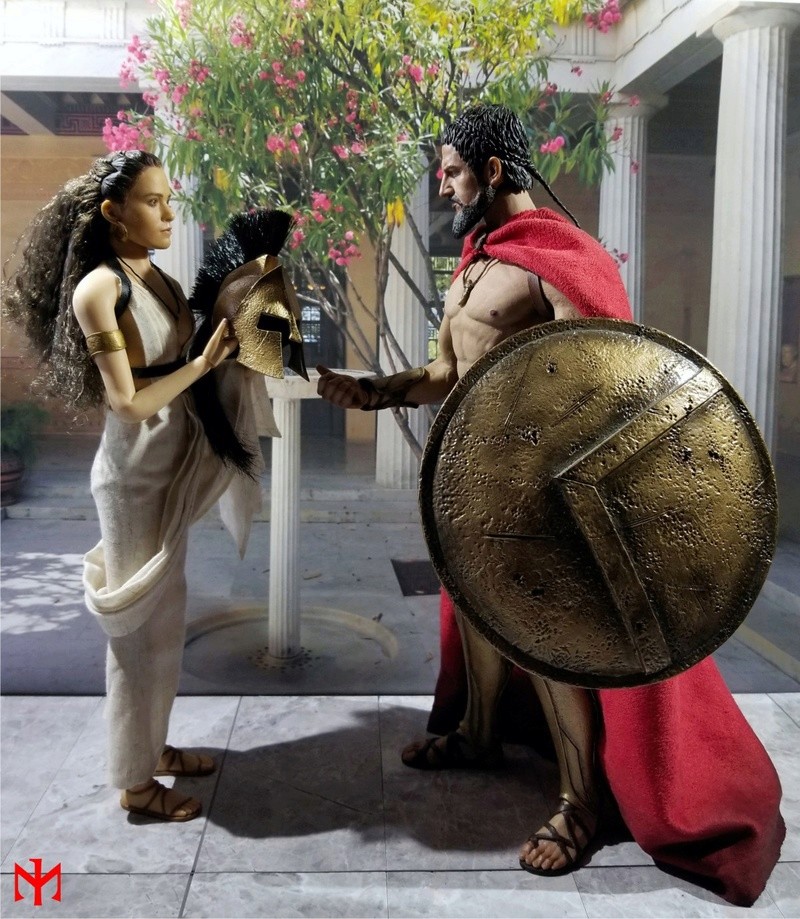 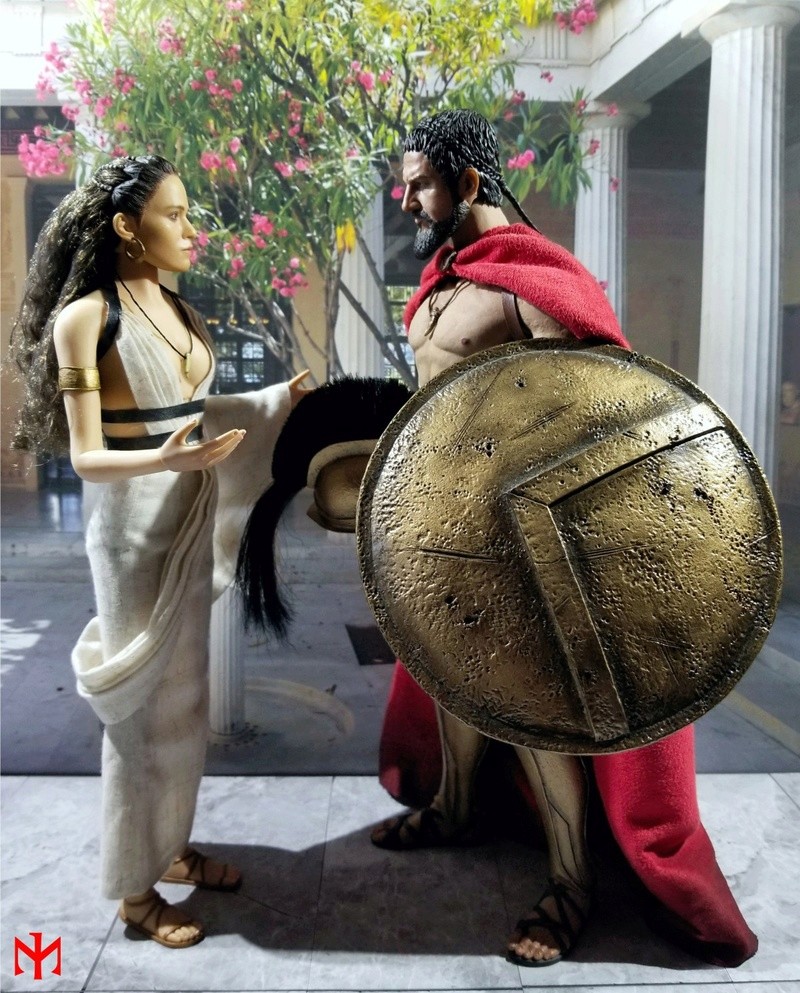 Nothing unusual. Be gentle with the hair, a few little strands became detached here and there. The figure managed to fall on its face a few times during posing and photographing, and unless I am imagining it, got a little blemish on its nose. I think she also developed a small stain on one shoulder -- but how remains a mystery. 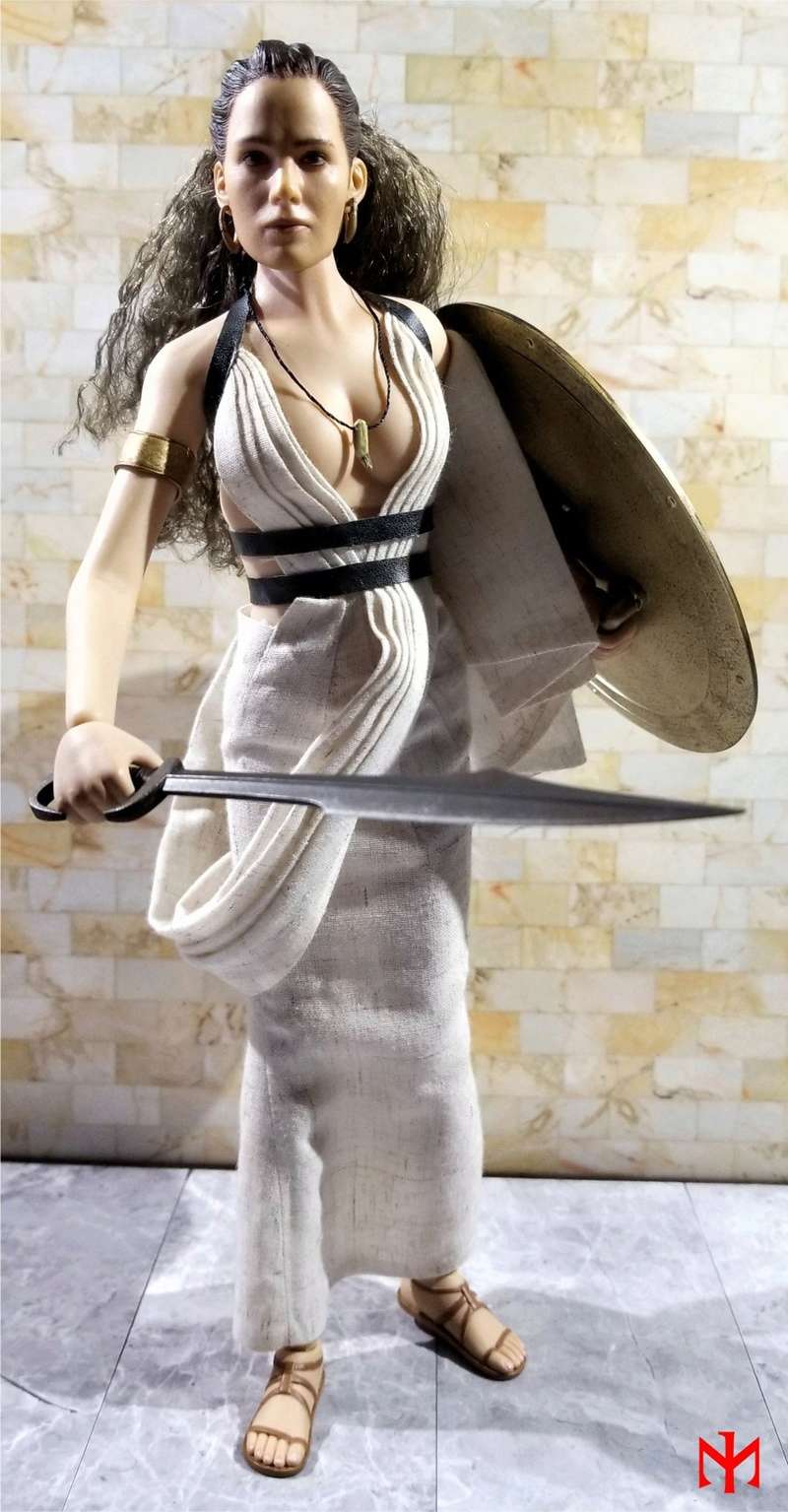 This is a very decent, even good figure, but it is not great. The imperfect likeness, the uneven paint job, the partly limited articulation, are all noticeable, and a significant factor especially at this relatively high price point. Unless you are a completist or a kitbasher or just like the appearance of the figure, you might be disappointed in one or more of these areas. Whether that keeps you from getting this figure is, of course, up to you. 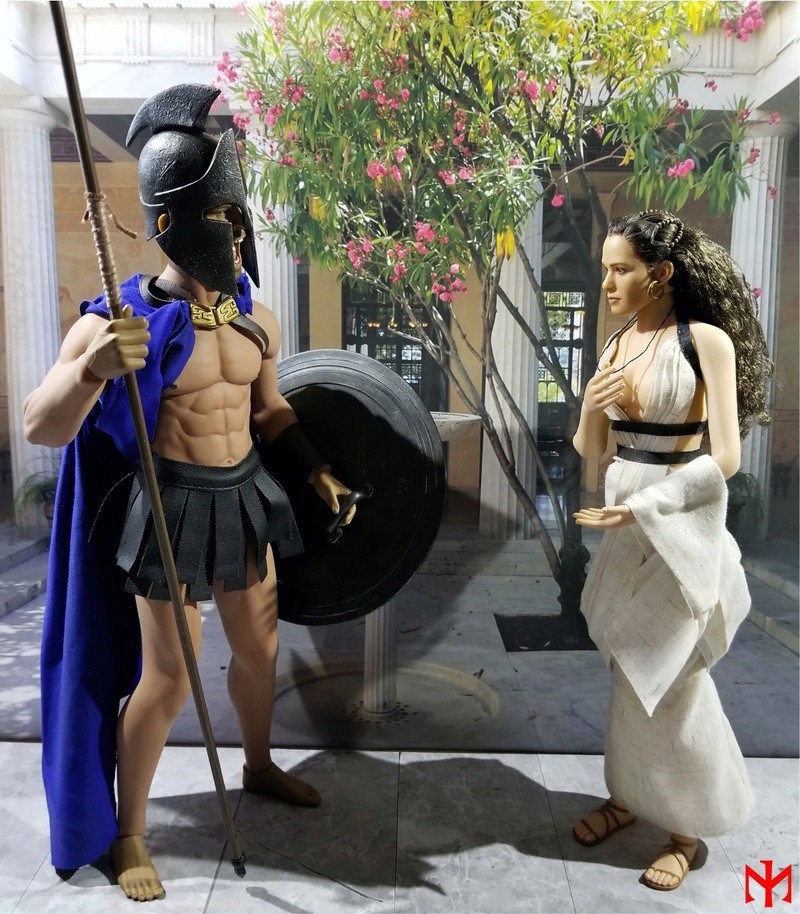