Sensual, Sexy, Erotic, Sadistic, Play-mate, Uninhibited…These are just a few names to describe the Queen of the Pin-Ups…the one and only…Bettie Page.
Born April 22nd, 1923, Bettie didn't start her modeling career until 1951. With her striking looks and expressions, along with her full figured body, Bettie became known as the “Girl with the Perfect Figure'. Posing for more than 20,000 photo graphs, Bettie also was a Playboy centerfold as well as a pioneer in the fetish themed photo shoots.
With her departure from the pin-up world in the 1950's, Ms. Page vanished until 1900's when her images resurfaced and began selling to a new generation of collectors and fans.


Born in Nashville, Tennessee in 1923. Betty started doing various modeling jobs when she was young, but she has not been appreciated by mainstream media.
In 1952, she started to shoot mail order photos. Many of her beauty photos during this period are SM themed.
Betty Page was the first restraint model, and she quickly became the hottest pinup girl in New York.
Betty also took off from time to time in the poster, and of course Hugh Hefner quickly caught up.
In January 1955, Betty boarded the extra large folding centerfold of "Playboy."

Betty Page is a southern beauty with jet-black hair and iconic bangs.
She showed the female body in a way that many people had never seen before. Those photos were controversial and Betty became popular.
Page has never shown direct sexual content in photos or movie scenes, at best nude photos.
Her provocative posture is very outstanding and attracts the public.
Betty Page has a great influence on the fashion industry and the modeling industry, and she is praised for it.
In the process of promoting the acceptance of popular culture, she played an important role.

Betty Page is dubbed the "Queen of Portraits" because she is widely known for her black lace suit.
She has a perverse temperament and a strange behavior. In the late 1950s, she was imprisoned in a mental hospital due to a mental breakdown attacking the landlord.
Betty was diagnosed with severe schizophrenia in 1992 and was released from the hospital.
She hired an asset manager and started to make money from her image.
Betty Page died of pneumonia in a hospital in Los Angeles in 2008 at the age of 85. 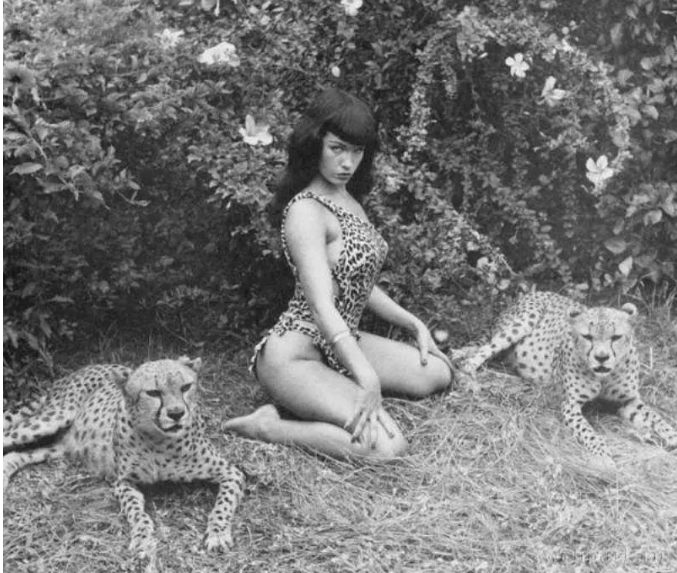 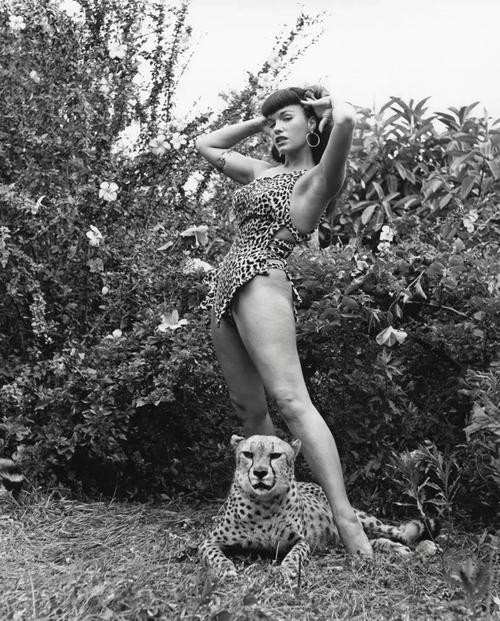 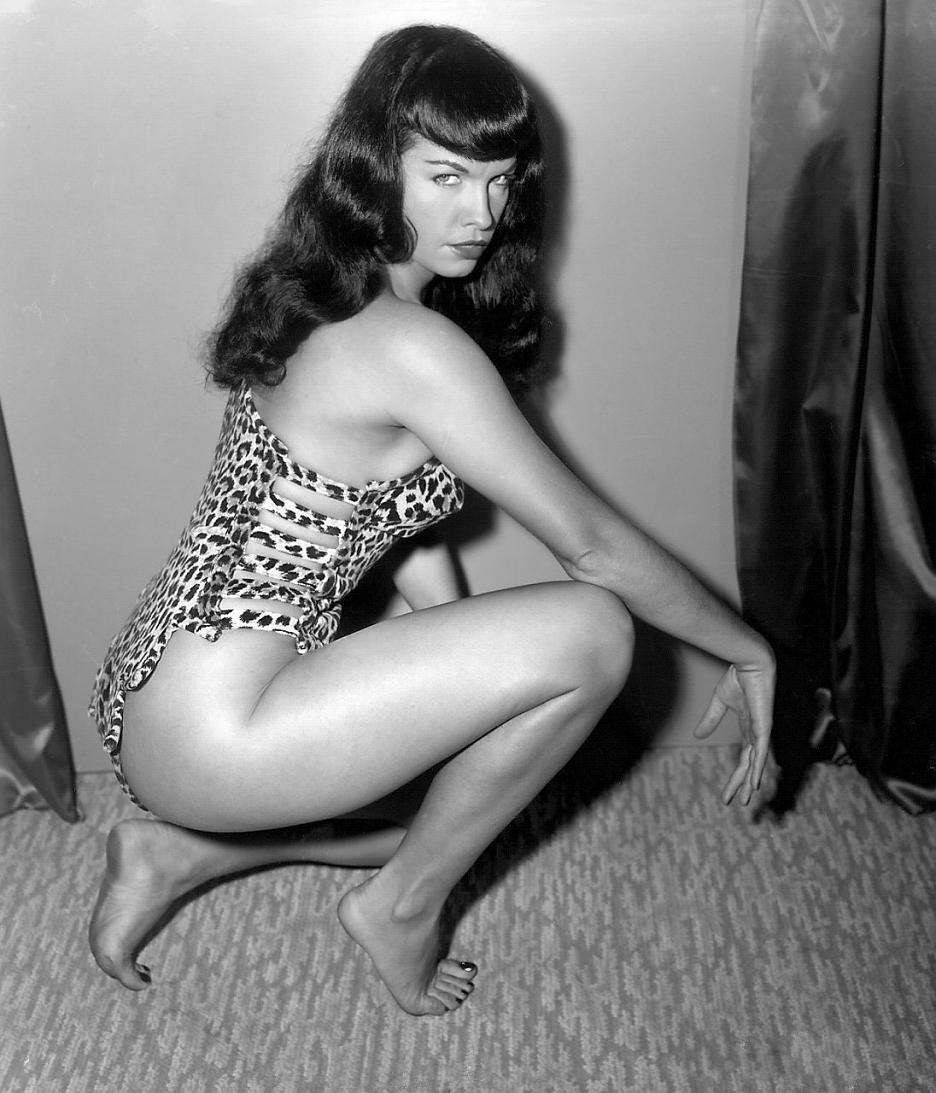 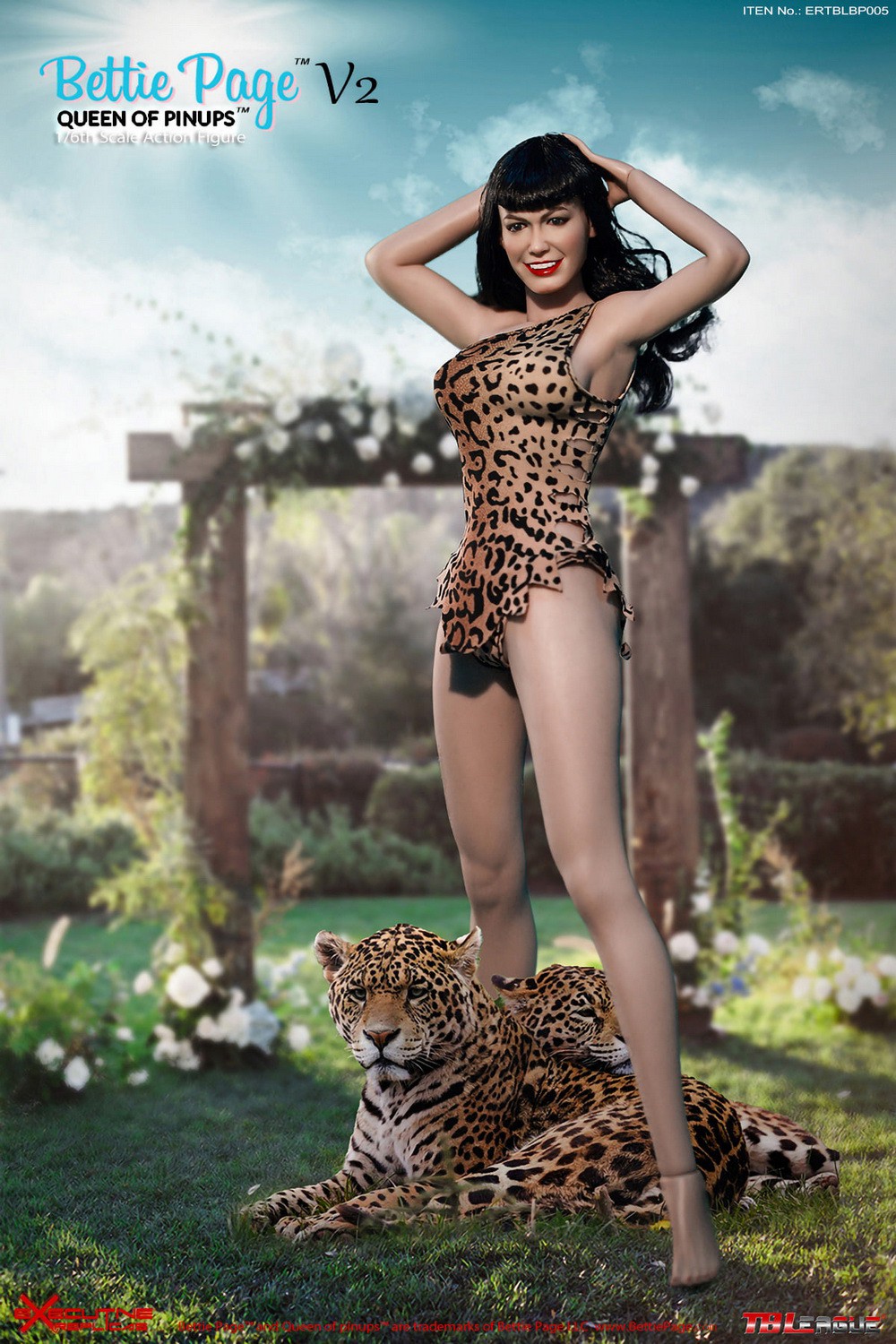 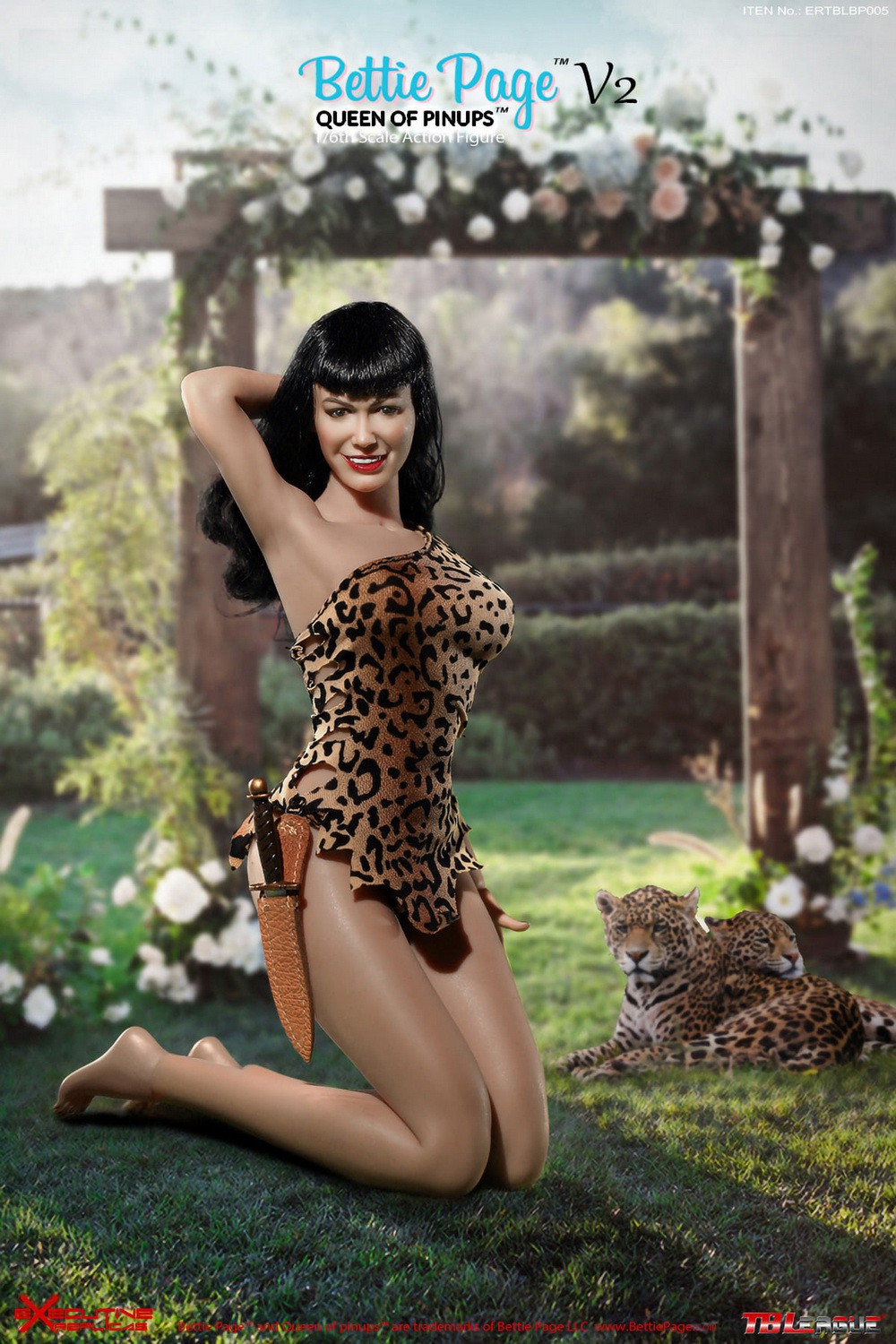 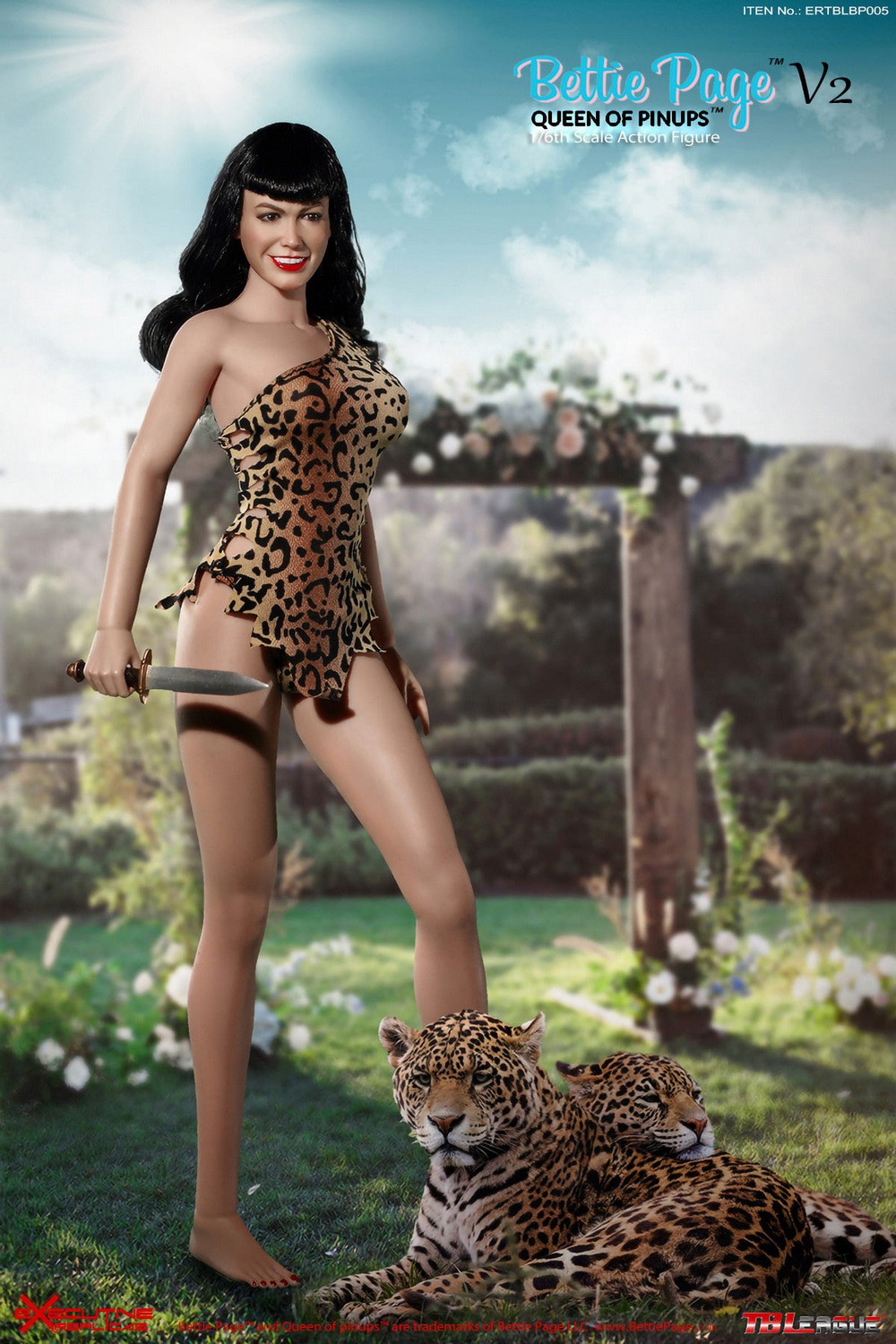 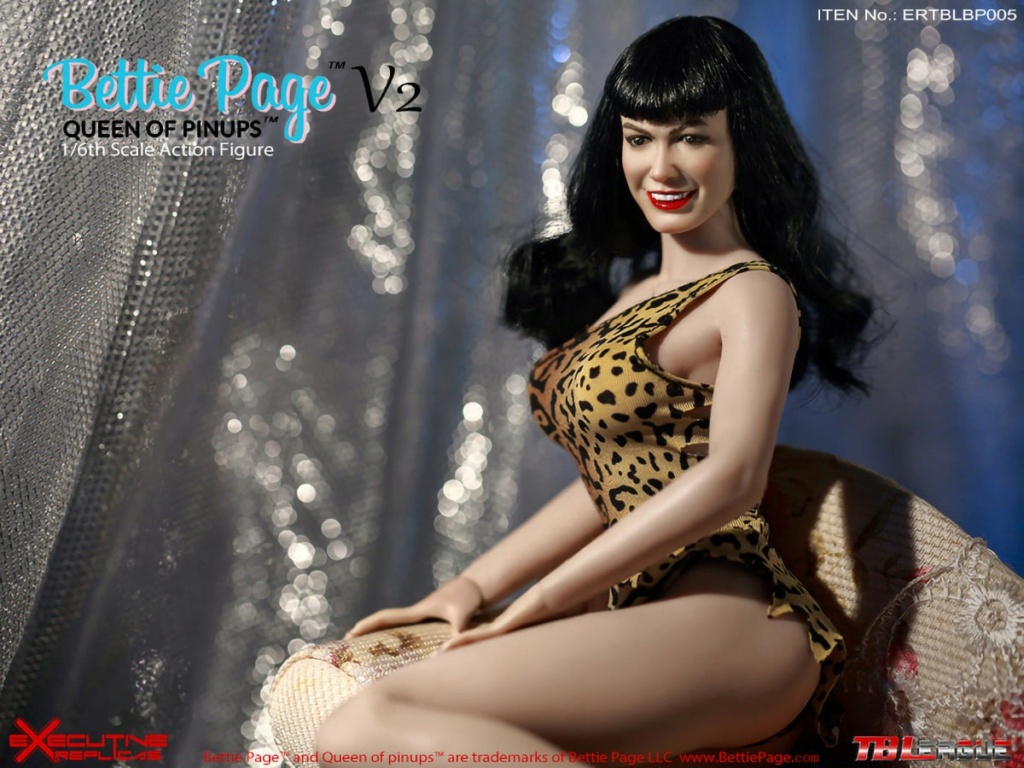 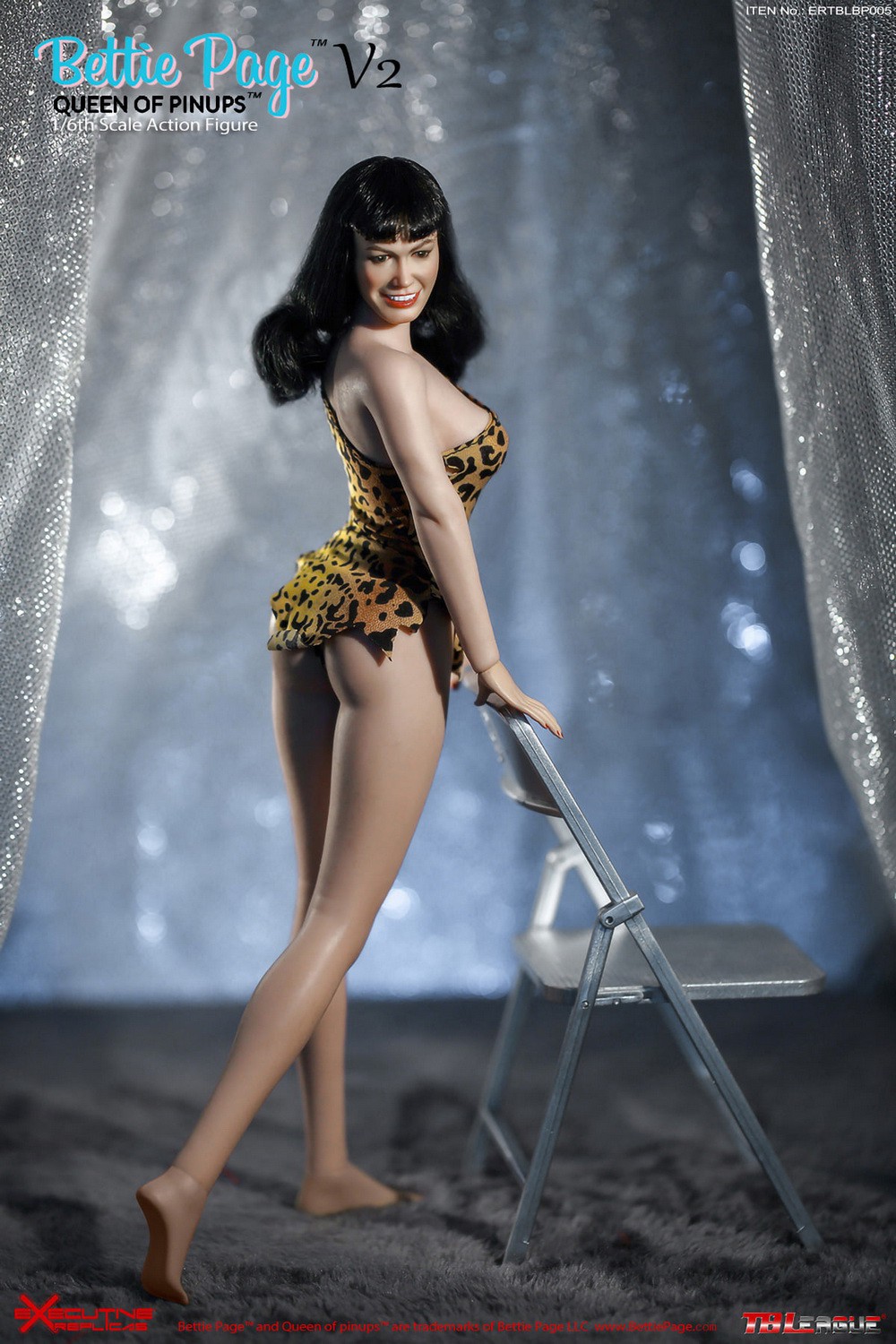 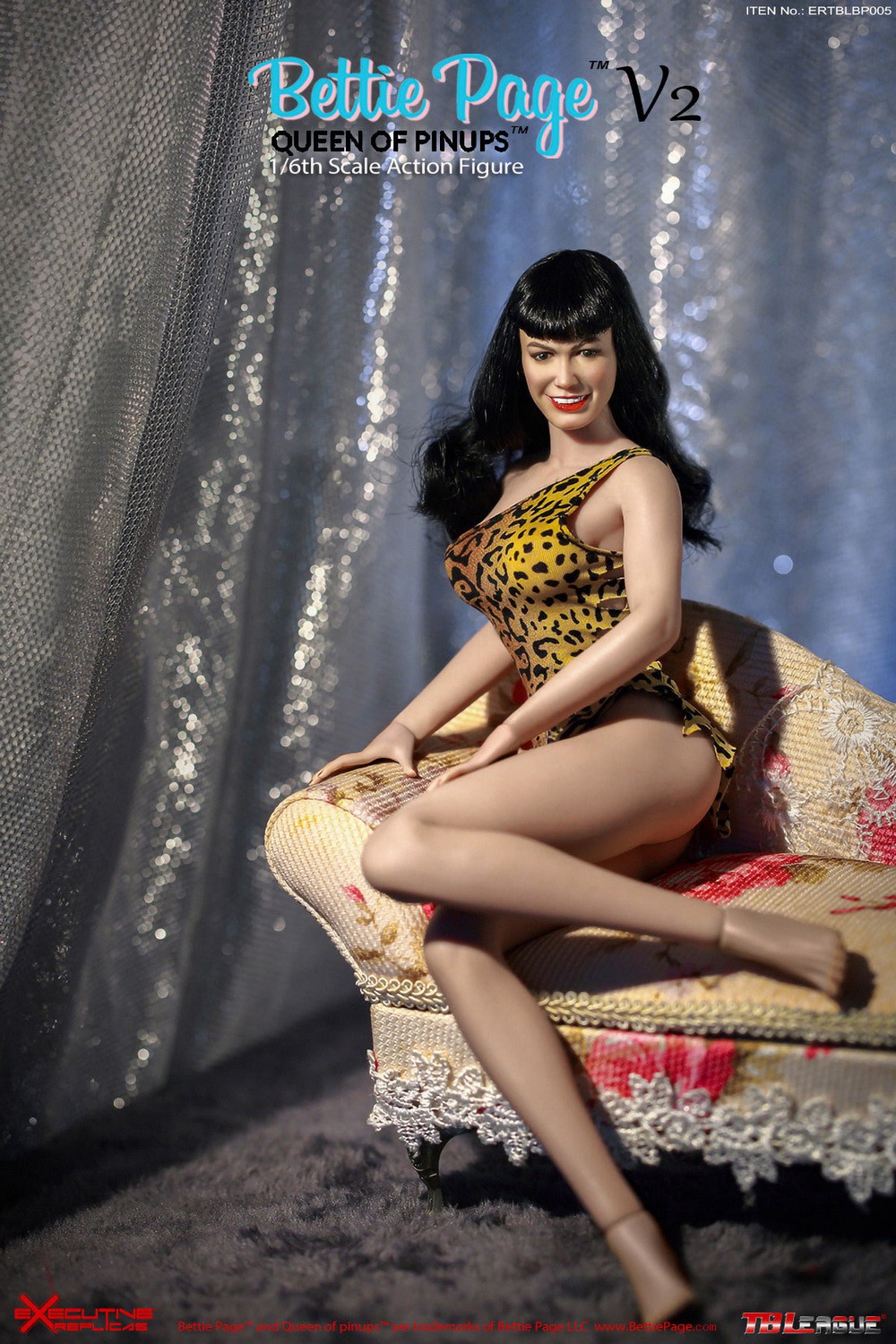 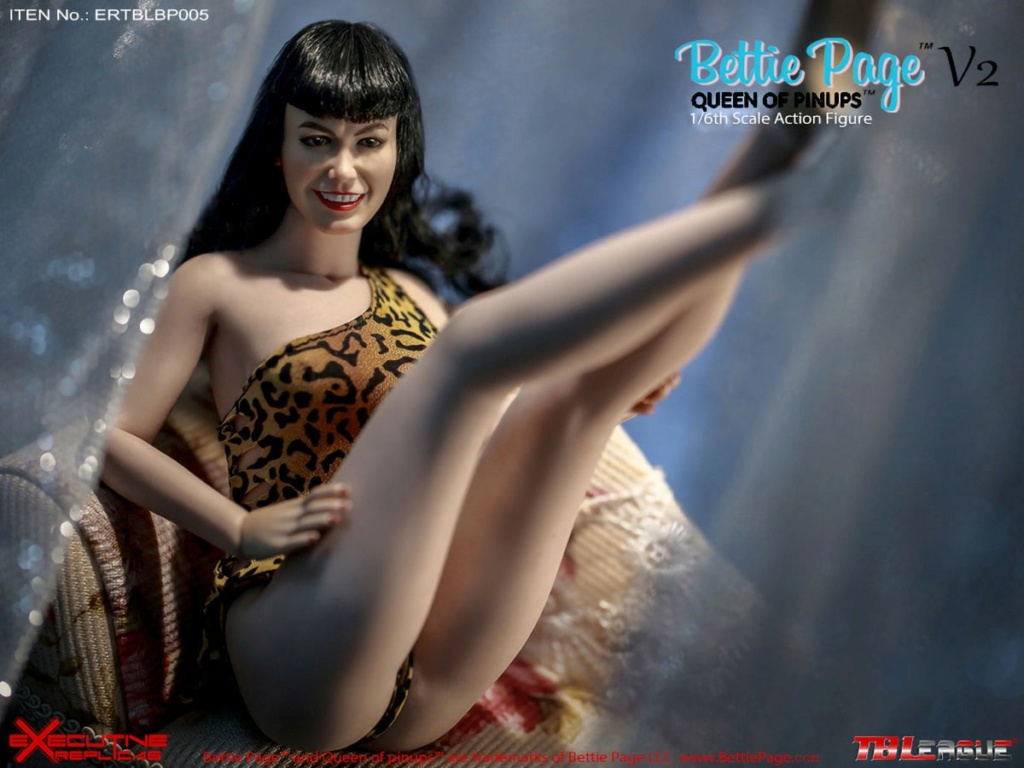 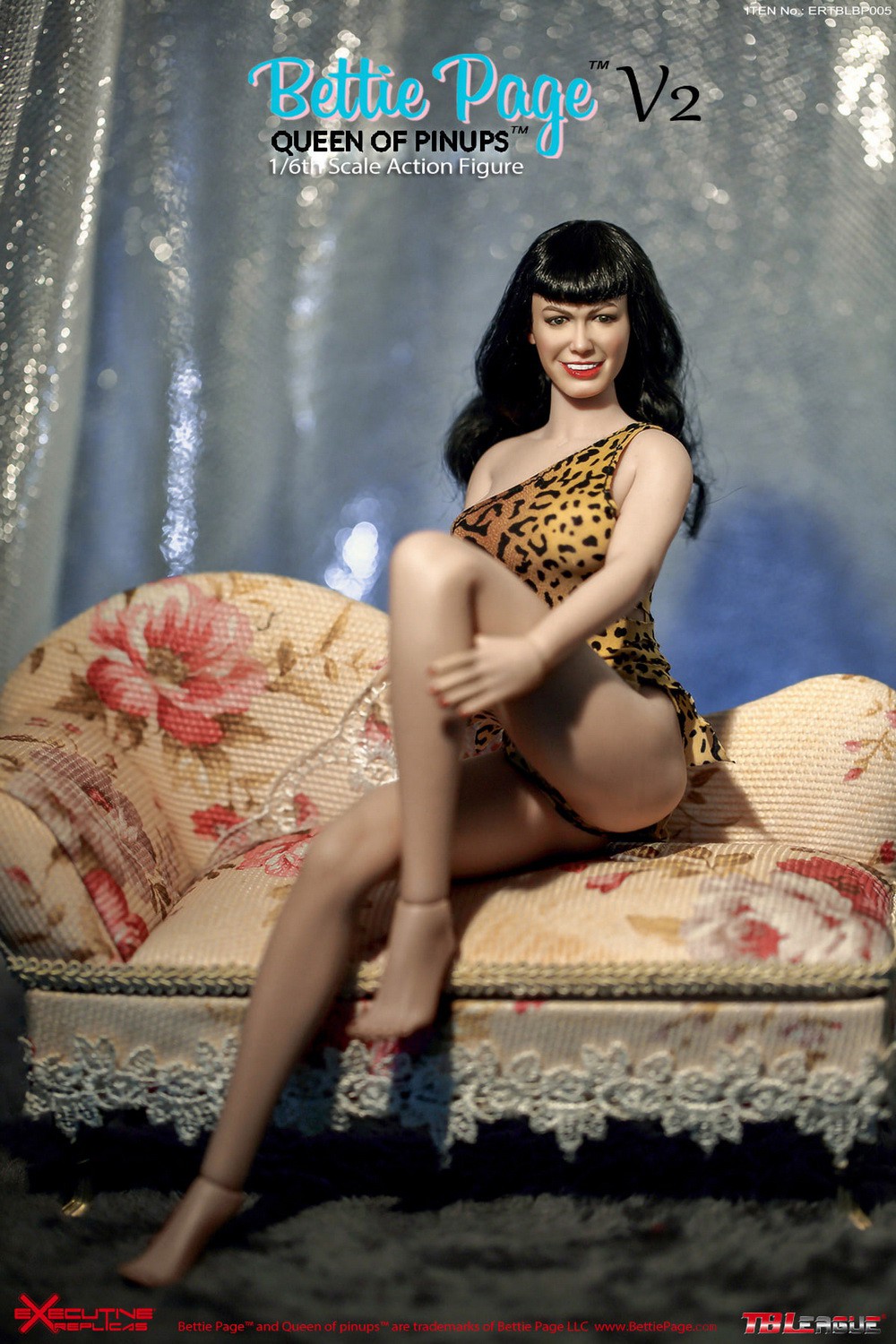 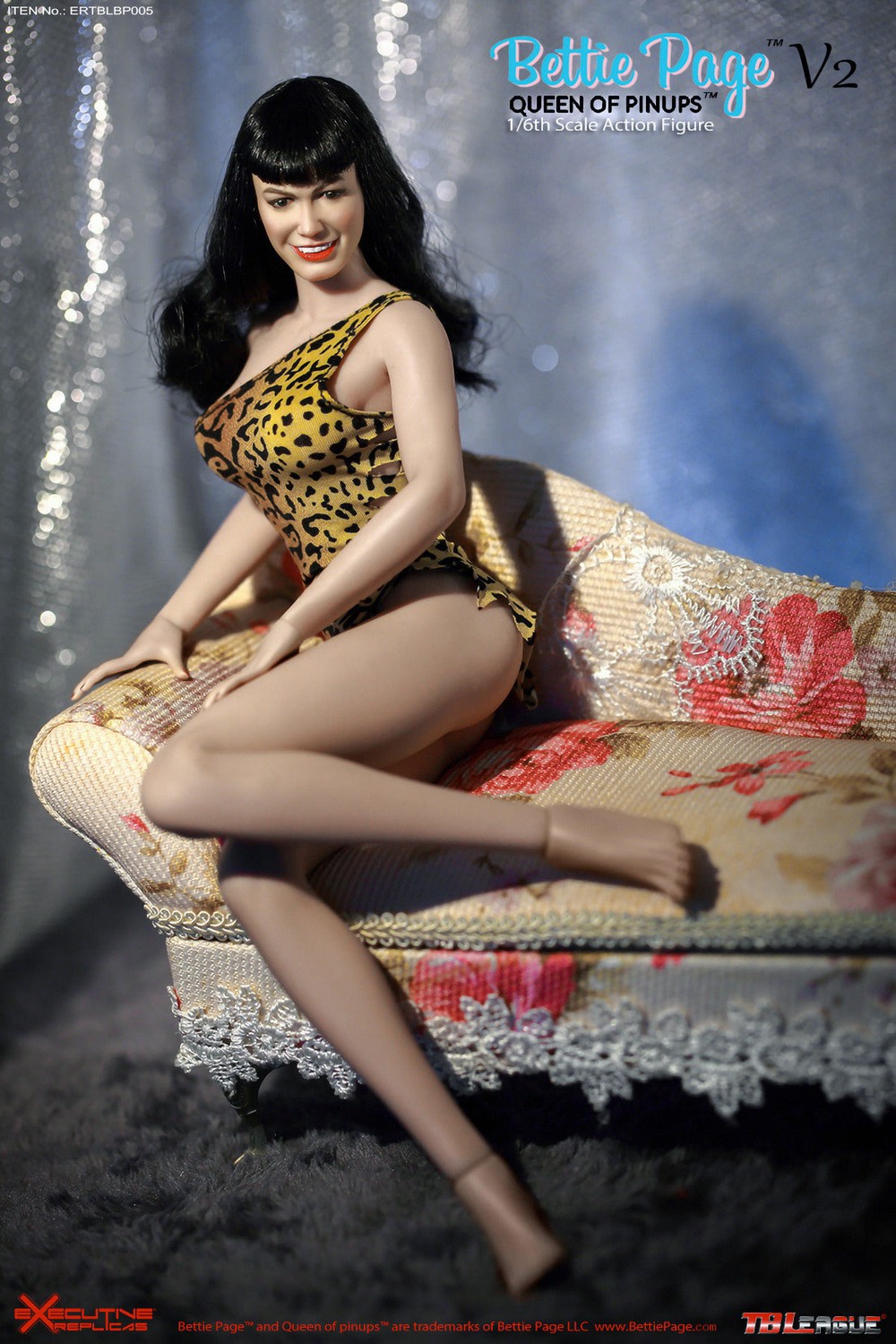 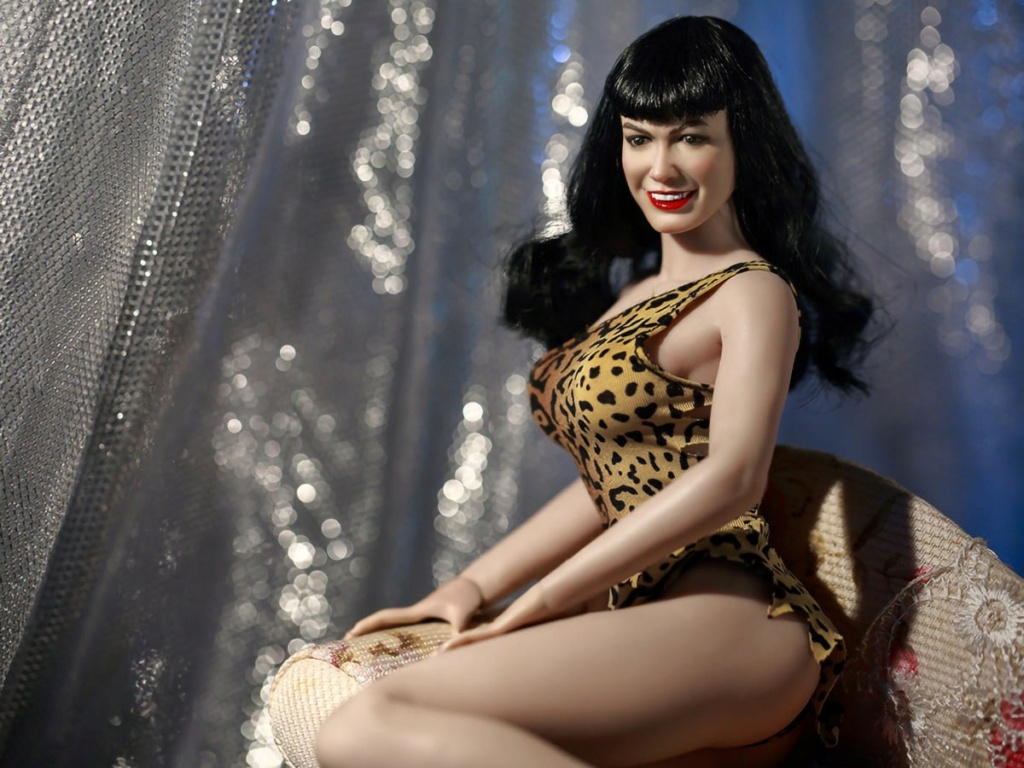 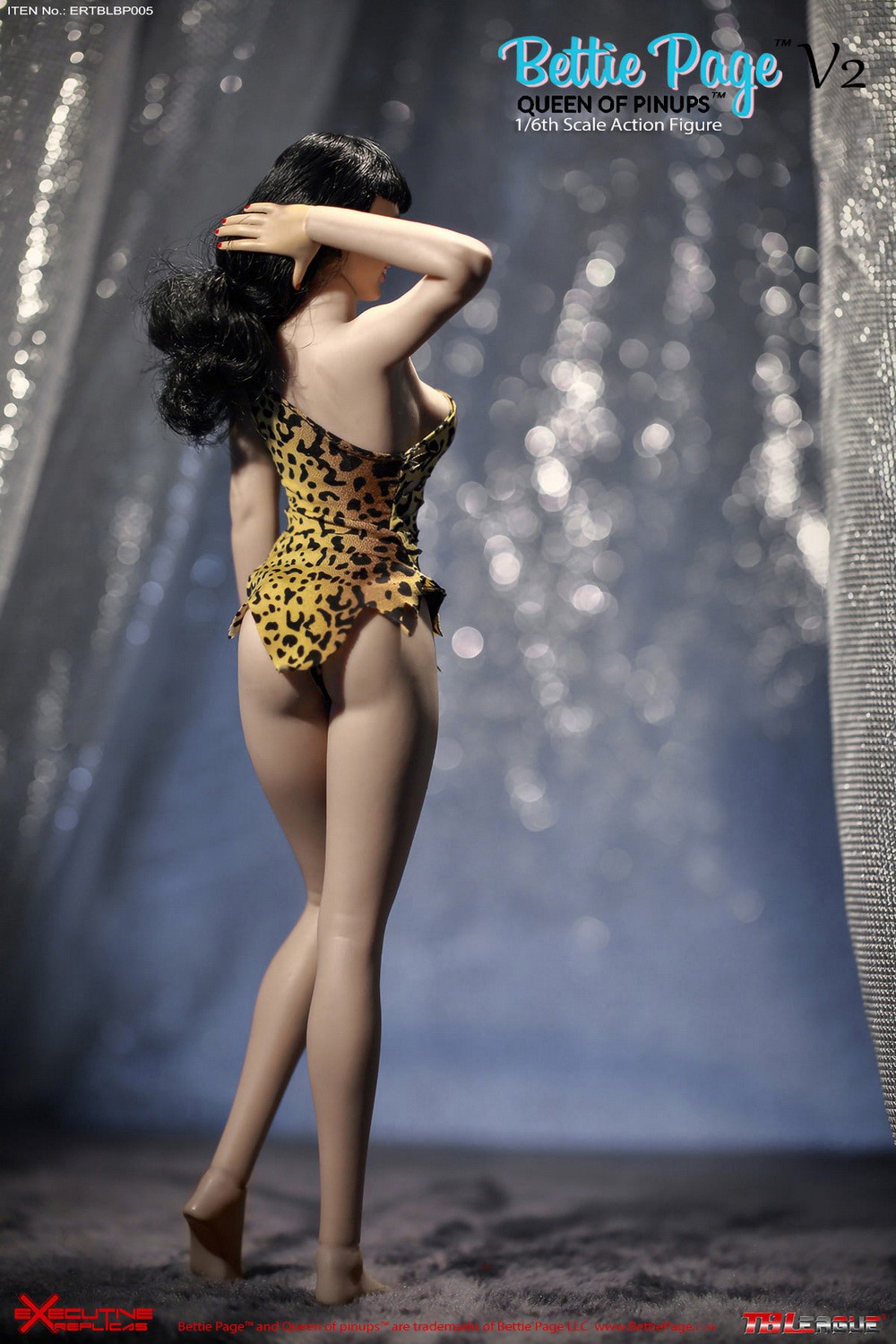 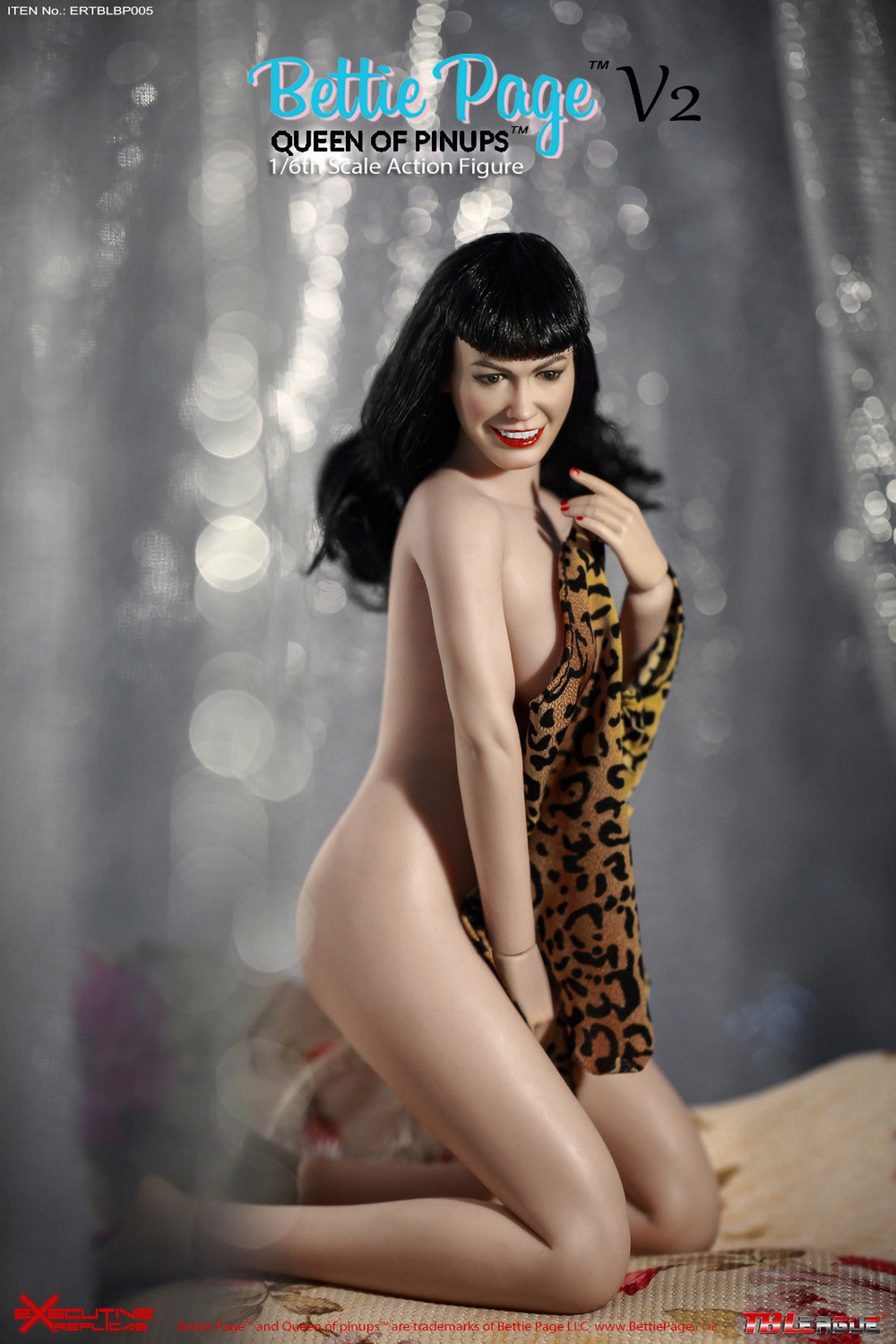 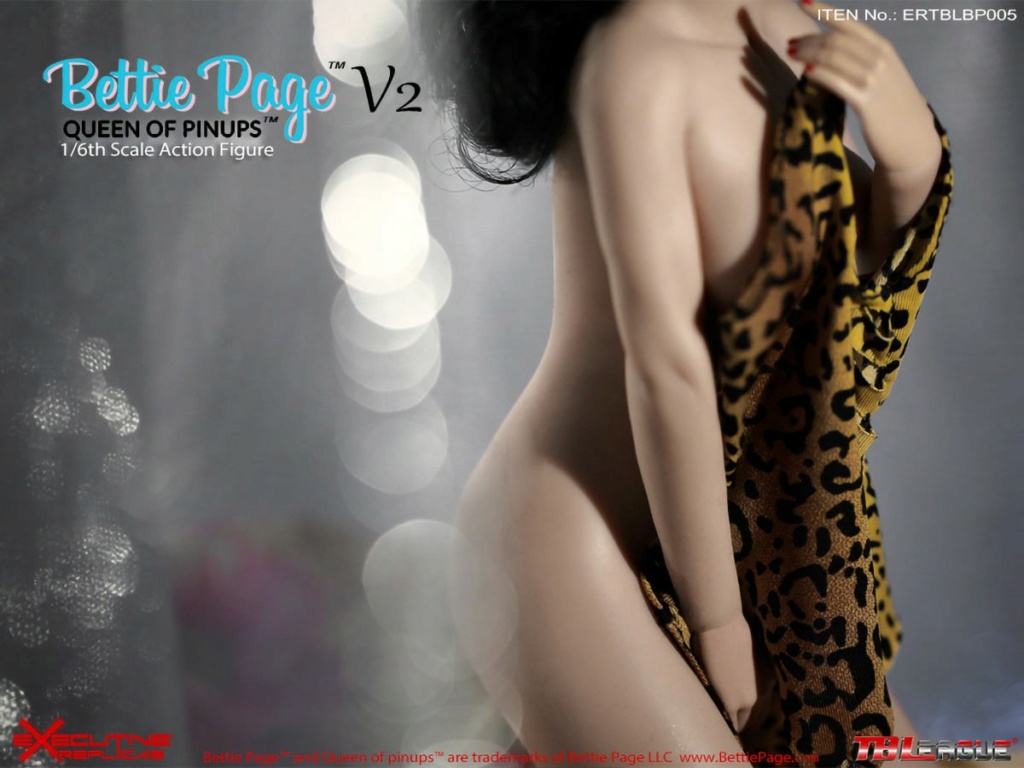 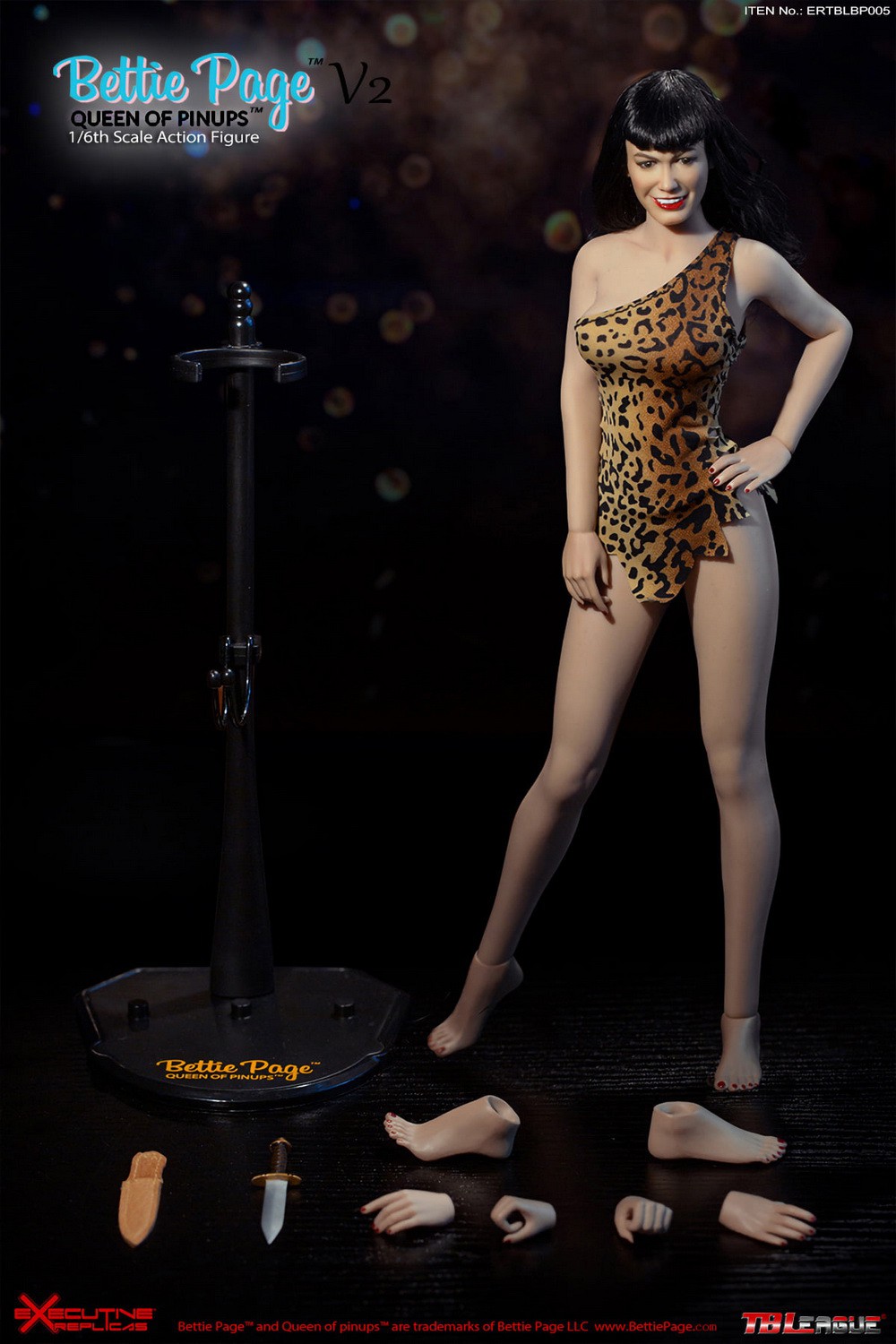 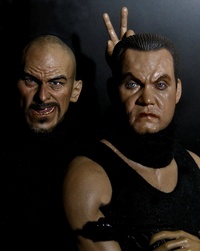 Posts : 433
Join date : 2019-04-02
Location : Lonely Little Old England
Hm, I'm not sure if that headsculpt is more or less terrifying than the V1 of this figure. It's a slightly improved likeness, granted, but there's something off about the positioning of her eyes. Smiles are never easy to get right, and from certain angles this just looks goofy. I know they're going for one of Bettie's more innocent 'cheesecake' posing options, but perhaps they should have tried one of her 'seductive' or 'imperiled' expressions instead.

The most interesting aspect of this figure appears to be that it might be one of those 42/43 bodies, but with nice practical detachable feet this time...

Founding Father
Posts : 7671
Join date : 2018-03-29
Location : Somewhere between myth and reality.
I'm not sure if it is the sculpt or the choice of expression or both, but this looks pretty unfortunate to me. On the plus side she might look great with almost any other head sculpt out there...

I hope she wasn't wearing actual cheetah posing with those cheetahs. Or actual leopard being posed with those leopards. Yep, sometimes I notice the small stuff.
_________________
I'll be back!

Posts : 433
Join date : 2019-04-02
Location : Lonely Little Old England
As it looks to be a fairly bare-bones set, it's a shame they aren't offering an alternative sculpt with a different expression.

GubernatorFan wrote:I hope she wasn't wearing actual cheetah posing with those cheetahs. Or actual leopard being posed with those leopards. Yep, sometimes I notice the small stuff.

Back then... it's more than likely, sadly.

I wonder if TBL are going to offer the body on its own as it looks quite nice.

GeeWillikers wrote:As it looks to be a fairly bare-bones set, it's a shame they aren't offering an alternative sculpt with a different expression.

I wonder if TBL are going to offer the body on its own as it looks quite nice.

Yes, but bare-bones is pretty much what they (and she) were going for... now maybe if they threw in some cheetahs? Or a sofa? Or even that folding chair lol.

The body might not be a 42/43 actually now I look closer, but I'm struggling to visually match it to any other. The next nearest would be a 32/33, but the chest is larger, the legs are slimmer and the arms are less stubby.

But y'know, TBL and their photoshopping... 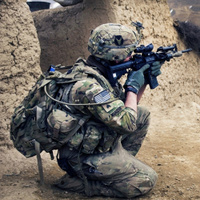 Posts : 262
Join date : 2018-04-01
Age : 58
Location : Puerto Rico
This is the second attempt at a Bettie Paige AFAIK, and in my humble opinion, it also failed. I believe the body is not voluptuous enough to accurately portray Ms. Page's curves, and the face, with that smile...failed. I guess her facial expressions are just to difficult to capture and translate into plastic.
_________________
Permanent Hot Toys boycotter

As in 'insanely expensive'.

Posts : 387
Join date : 2018-04-07
Its crazy but i'd prefer a rooted hair version of the first headsculpt rather than this one.
The smile really throws off the resemblance.