I was just goofing around a bit with the graphics software, using a couple of the photos I took for the clothing thread (HERE) that I couldn't use because they were taken against a green screen and I was blanking out on the editing. 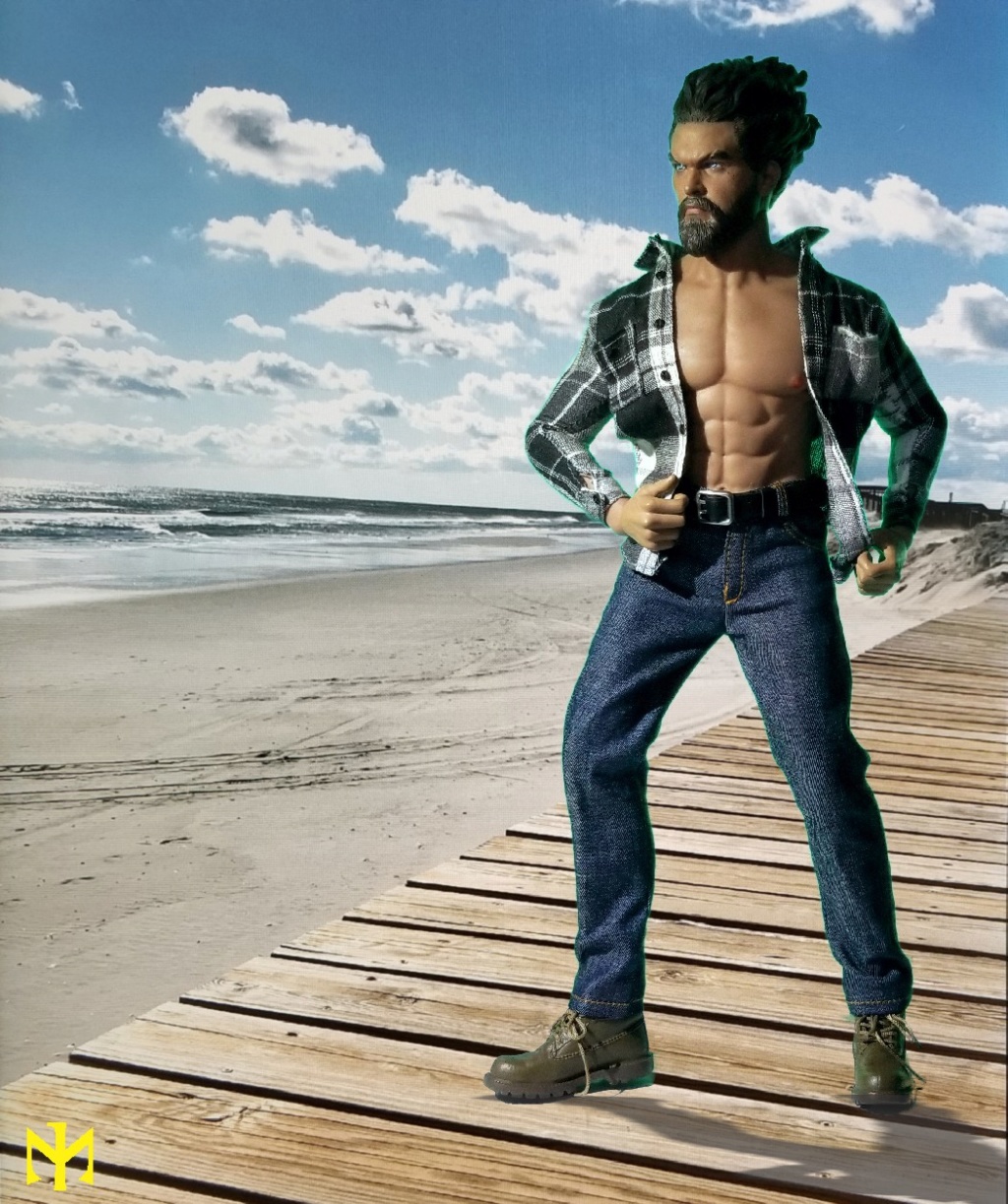 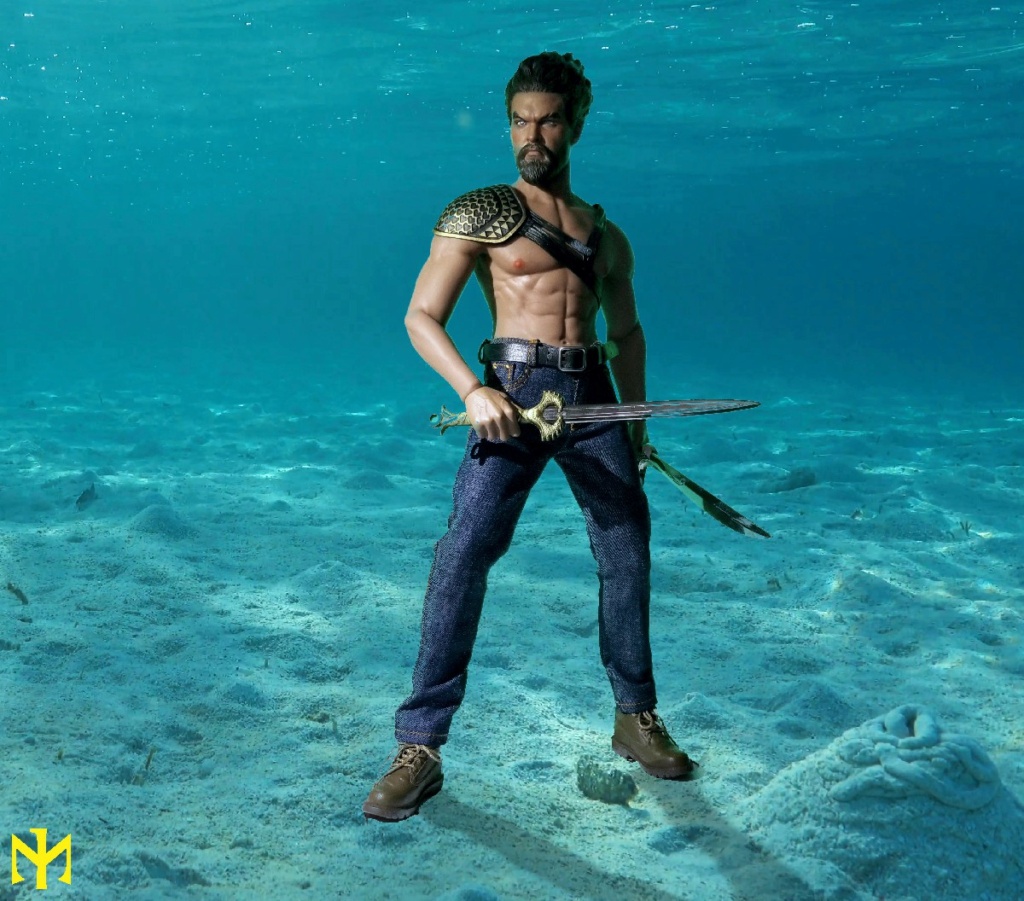 Like so many of us, I wasn't completely satisfied with Hot Toys' Aquaman head sculpt in terms of both likeness and molded hair sculpt (which is very nice in and of itself, but hair this long should not be sculpted for various reasons). So I decided to modify it with a re-hairing and partial repaint. Here is a little summary of the progression of the project.

Although Hot Toys made the questionable decision to go with sculpted hair, it tried to improve its appearance by installing it in layers, which helps customization by easing removal and allowing for a more or less complete fully-realized head beneath. I began by carefully tugging on the soft plastic hair of the original head sculpt (1). In this instance it is composed of four different pieces glued to the head proper and to each other. Luckily, they weren't glued very strongly, and with just a little bit of persistence and repetition, I was able to begin pulling off the largest, enveloping exterior hair piece (2). 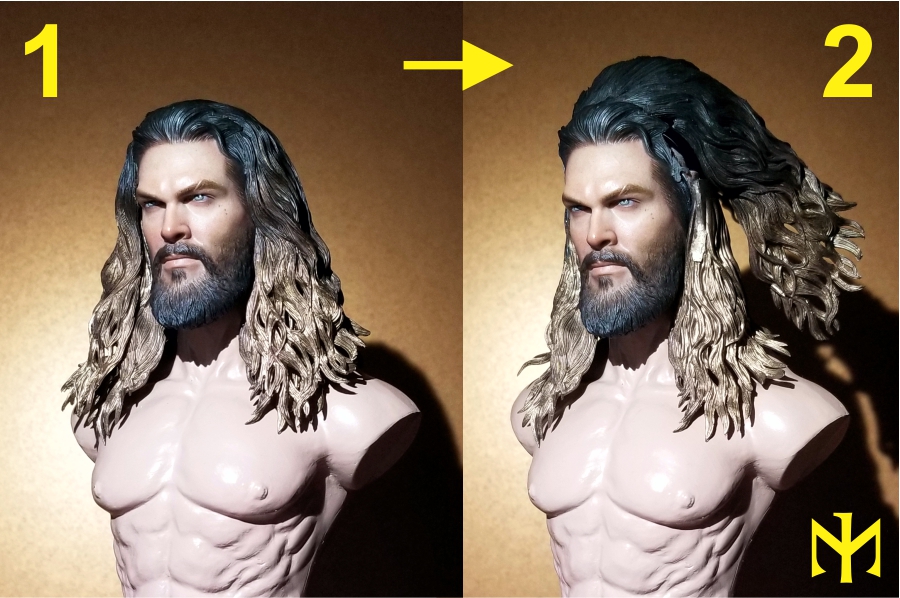 This left the pieces hanging over the sides and back of the neck (3a-3b). They were removed the same way. 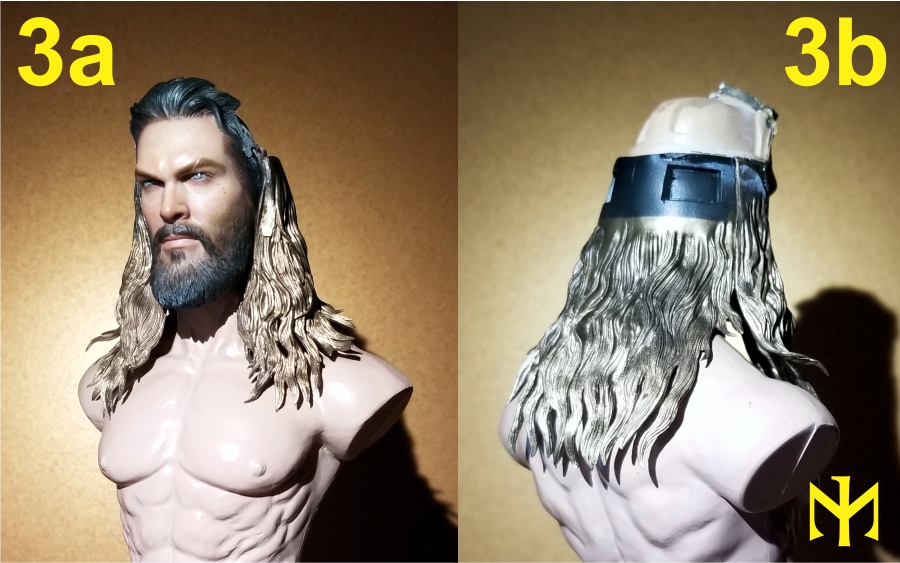 Removing the pieces hanging over the side (4) and the back leave us with a bald head (except for a bit of the hairline over the forehead, which I decided to keep) which features some useful goorves carved into it (5a-5b). The reason these are useful is that without them you would end up with an even fuller, puffier hair after you glue it onto the head, and they help diminish this problem a little bit.

Next I used three different colors of hair to glue onto the bald head in tiers -- starting with a line just above the neckline running around the back of the head and moving upwards. When this step was completed, the look was a dramatic mess (6). After the glue had cured, I weeded off loose strands and rinsed the hair to make it fall a little more naturally, and painted some highlights and color variations (to match the hair) onto the molded beard, mustache, and forelock, as well as over those parts of the hair where the glue was visible; I also tried to lighten some of the painted stubble on the head (where the mustache and beard part going upwards along the jawline) to increase the likeness to Jason Momoa (7). 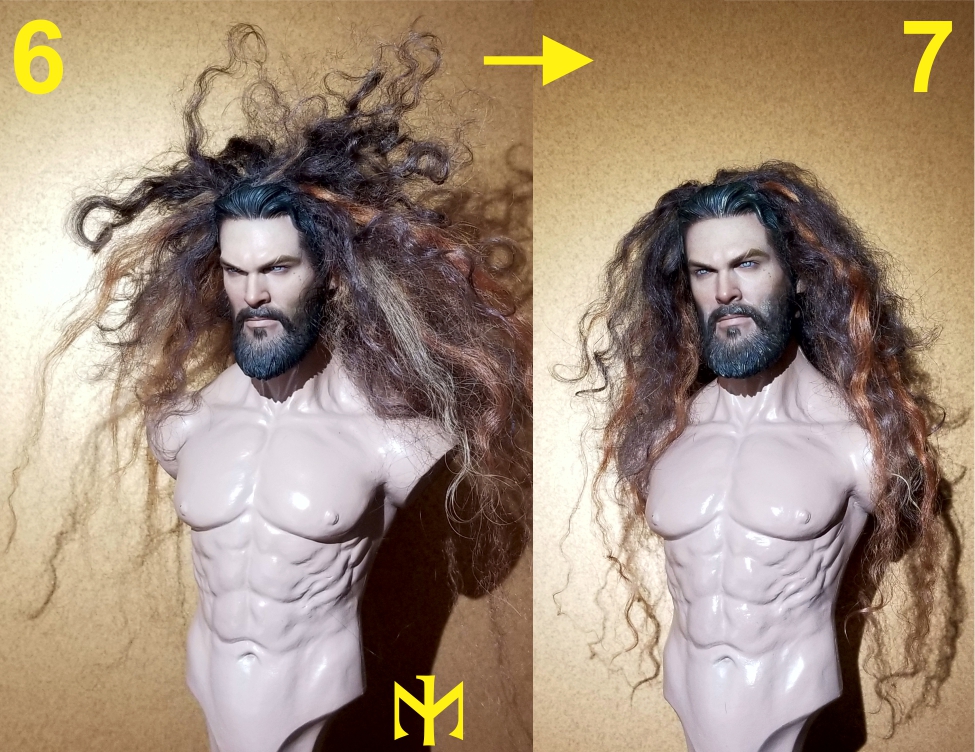 Finally, I cut down the hair to the correct length (with locks reaching as far down as about the armpit) and treated it with a mixture of water and shampoo+conditioner that I did not rinse off, to give it a more natural fit (8a-8b). And with that my modifications are complete. 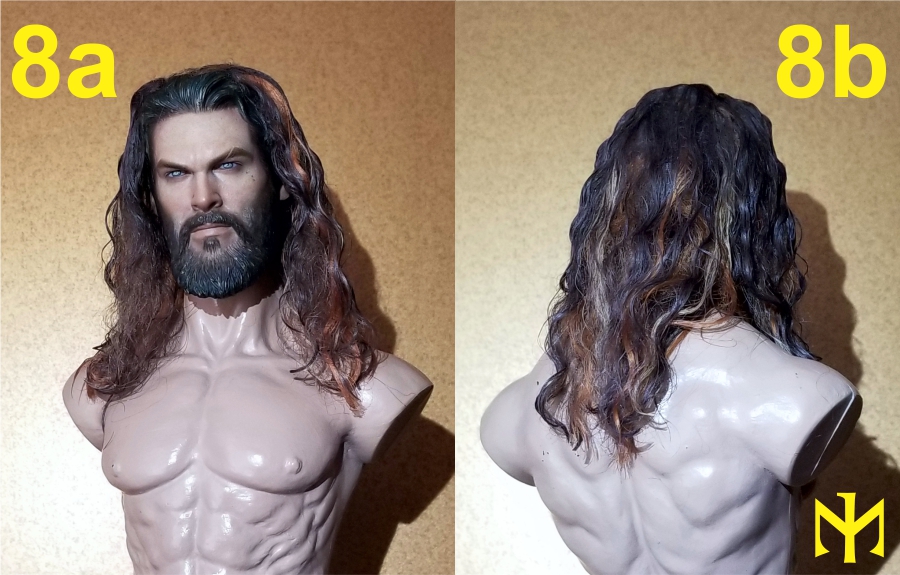 Here are three views of the resulting appearance.

And here are some more close-up ones. 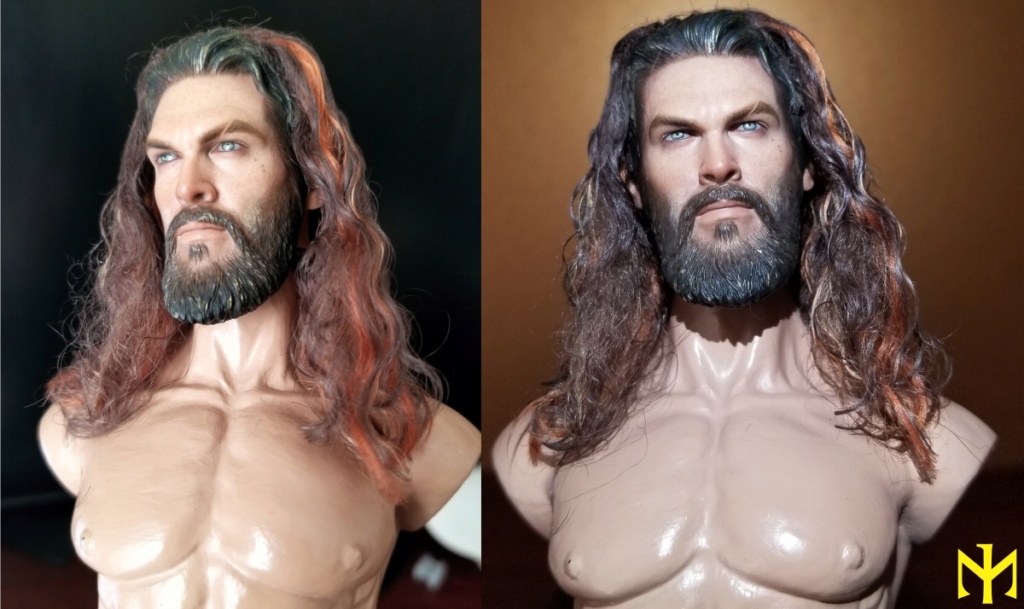 Here is a comparison between the HT set (Aquaman from Justice League) and the same with the modified head. I should point out that I was modifying the head on principle, not specifically for this figure set or look. I am also aware that the screen look has much more emphatically bleached locks towards the lower reaches of the hair, but I wanted a slightly more organic and subdued look. 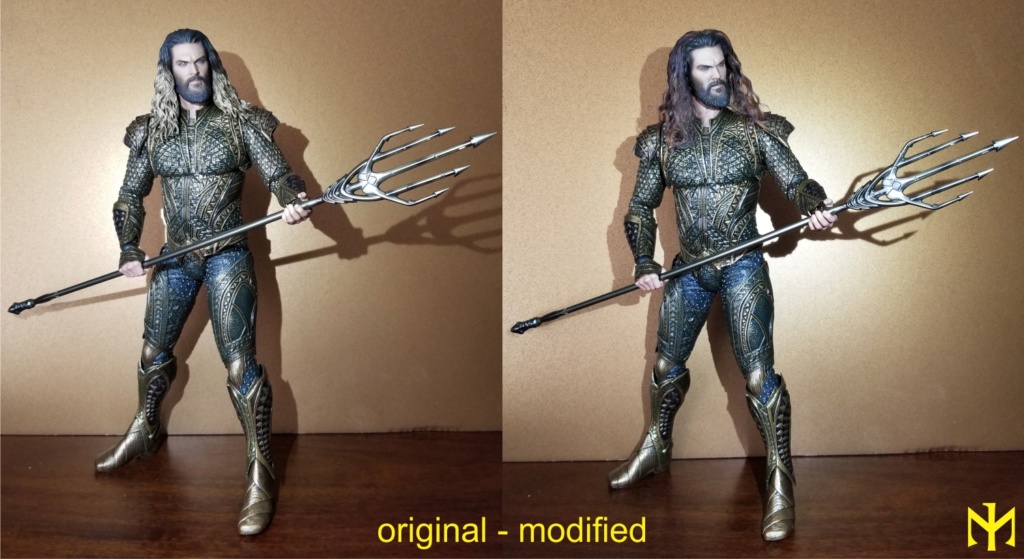 I think it turned out ok, and I hope you liked it or found it interesting. What do you think?

Specialized body with over 30 points of articulation

One (1) pair of Trident holding hands

One (1) pair of relaxed hands

Each piece of head sculpt is specially hand-painted

One (1) gold-colored Trident with engravings 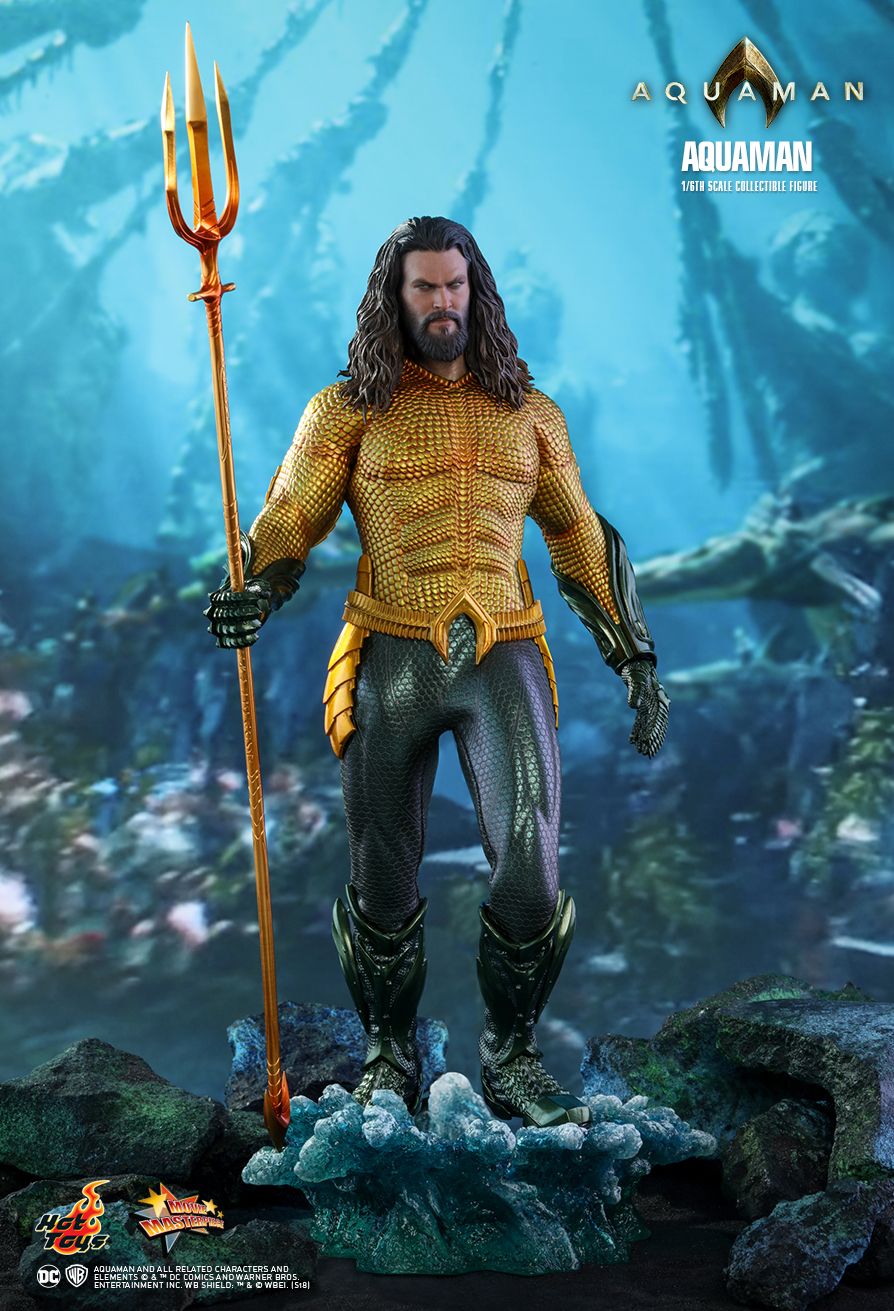 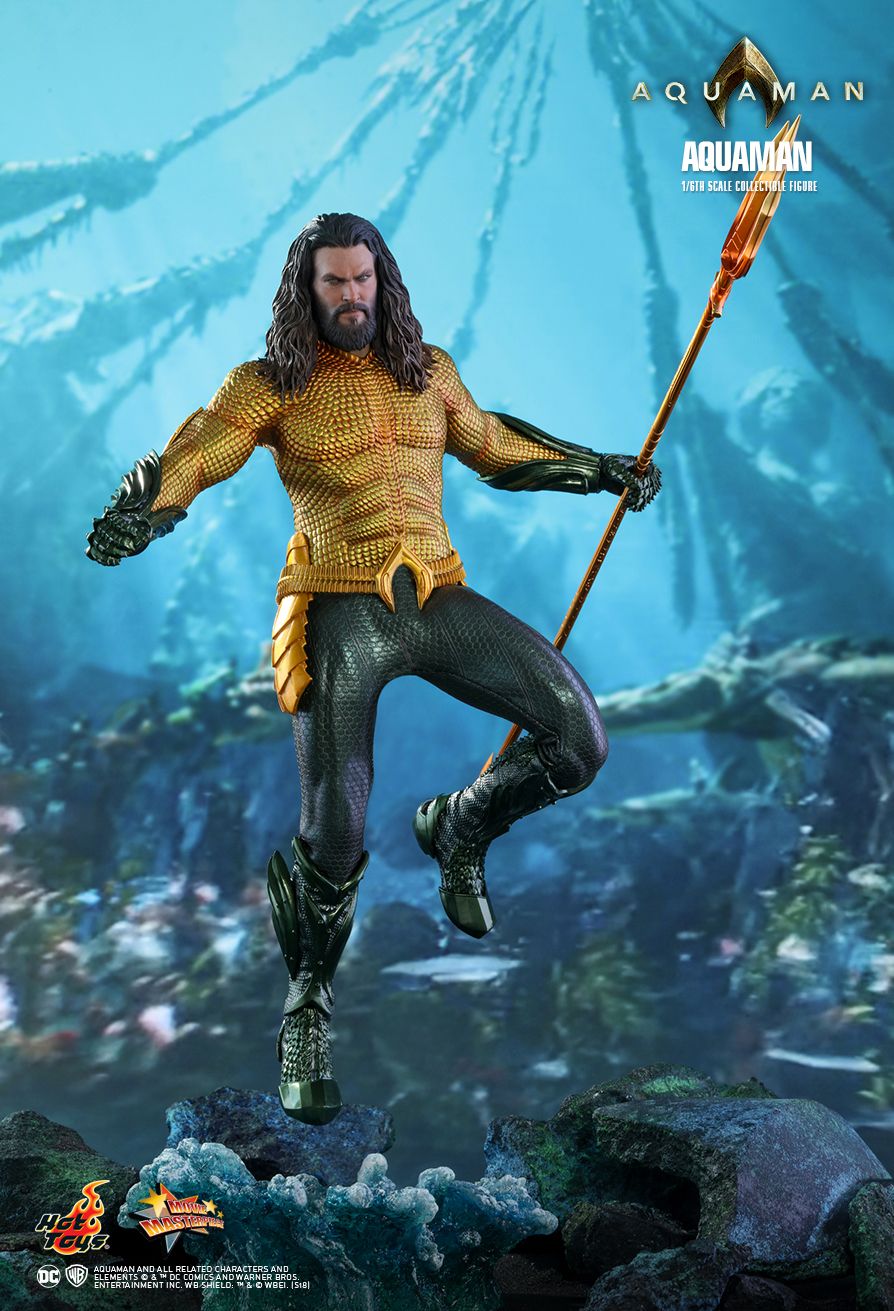 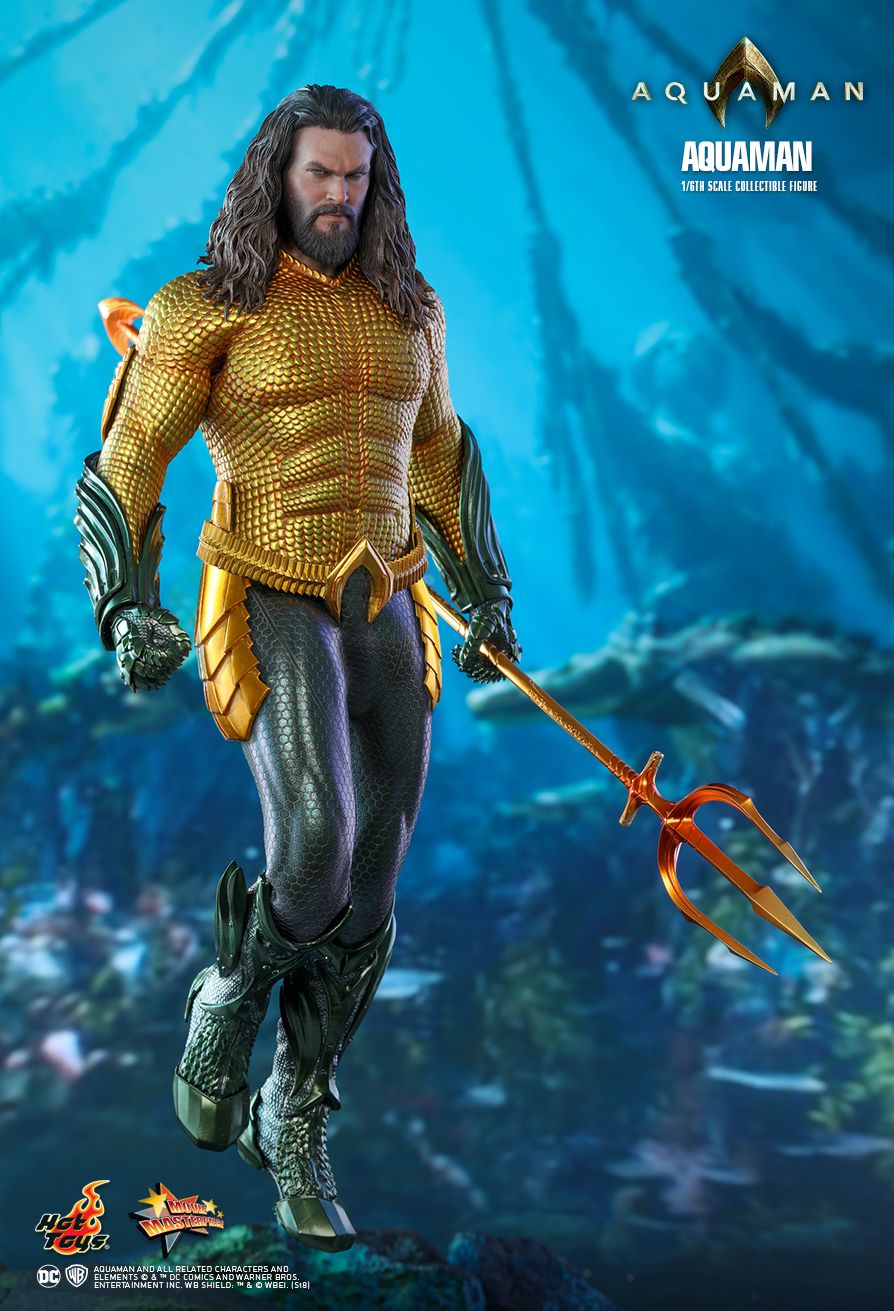 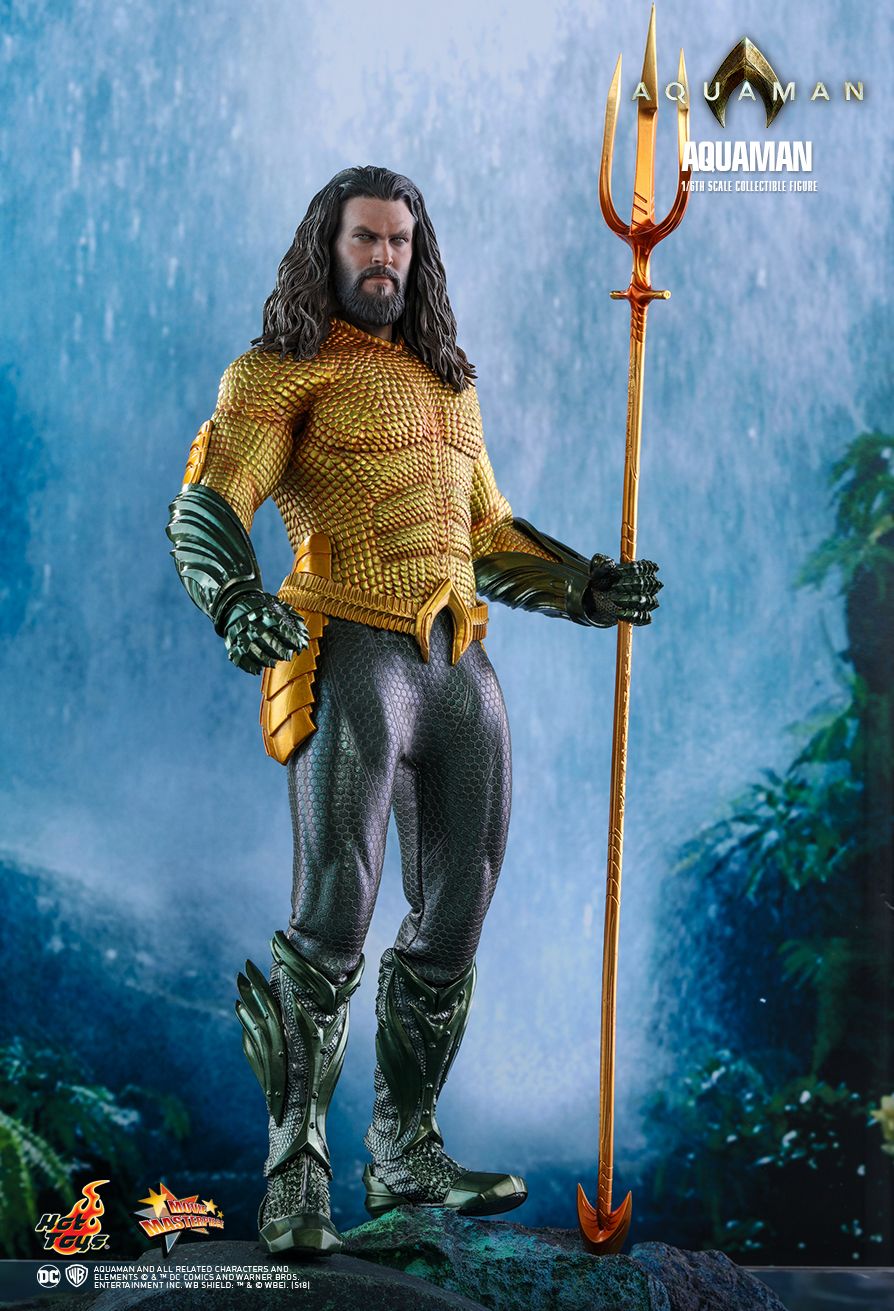 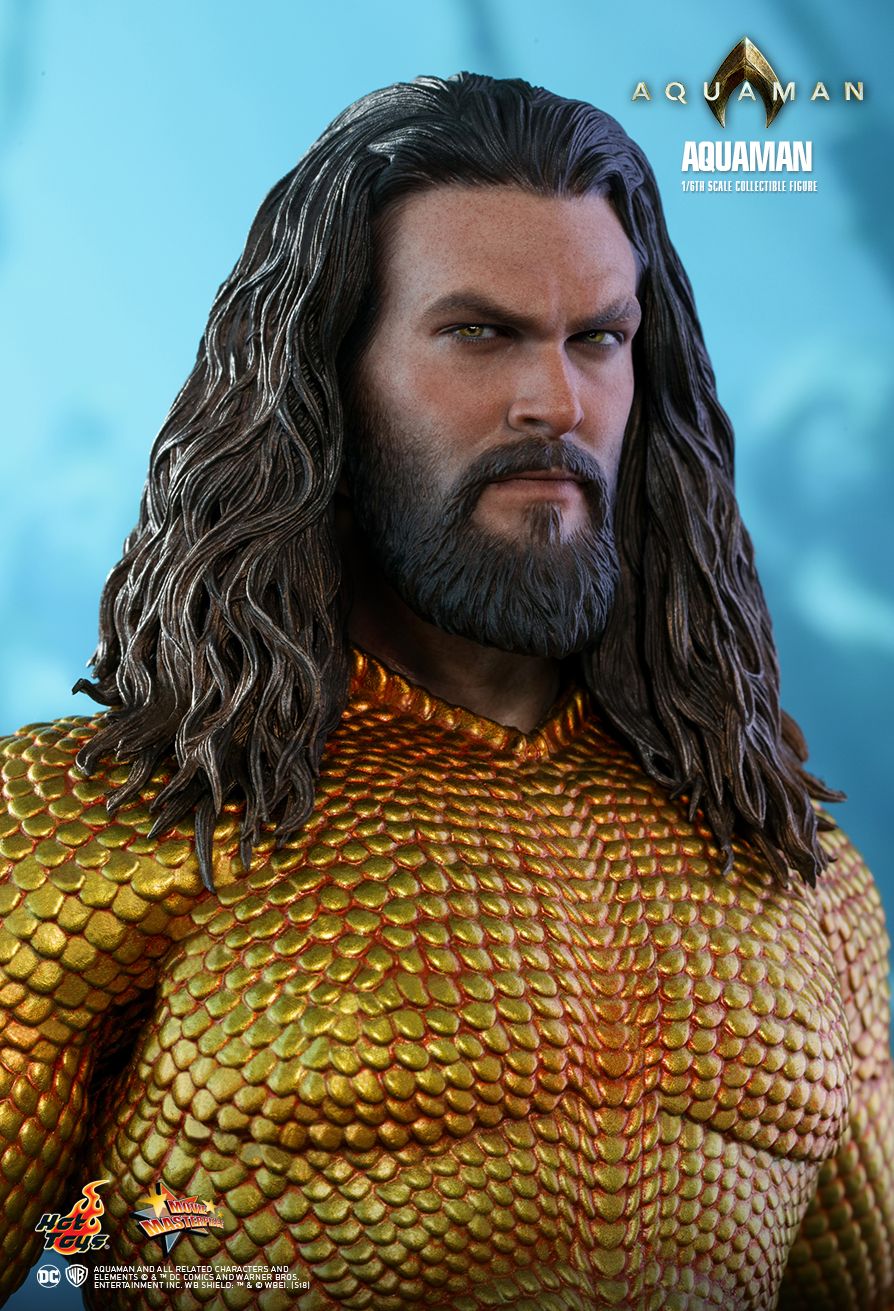 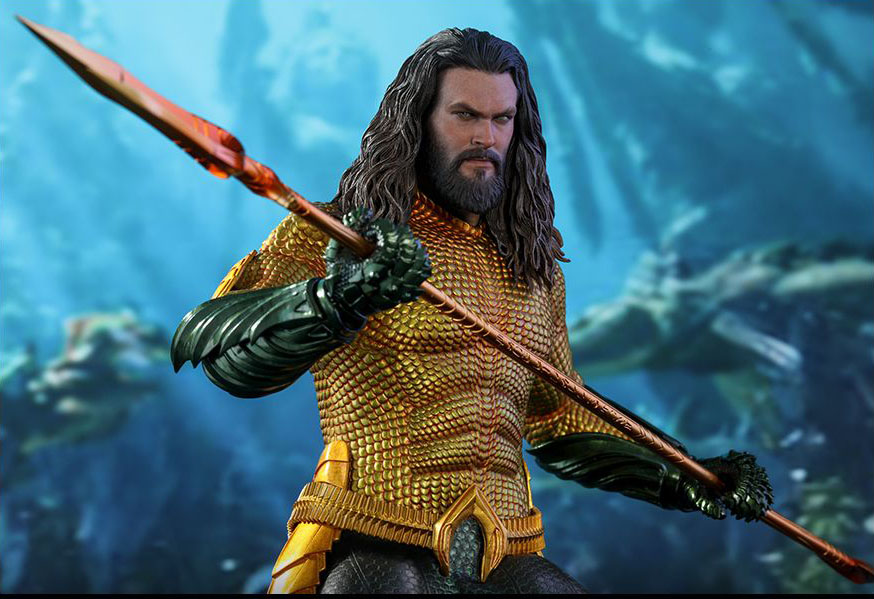 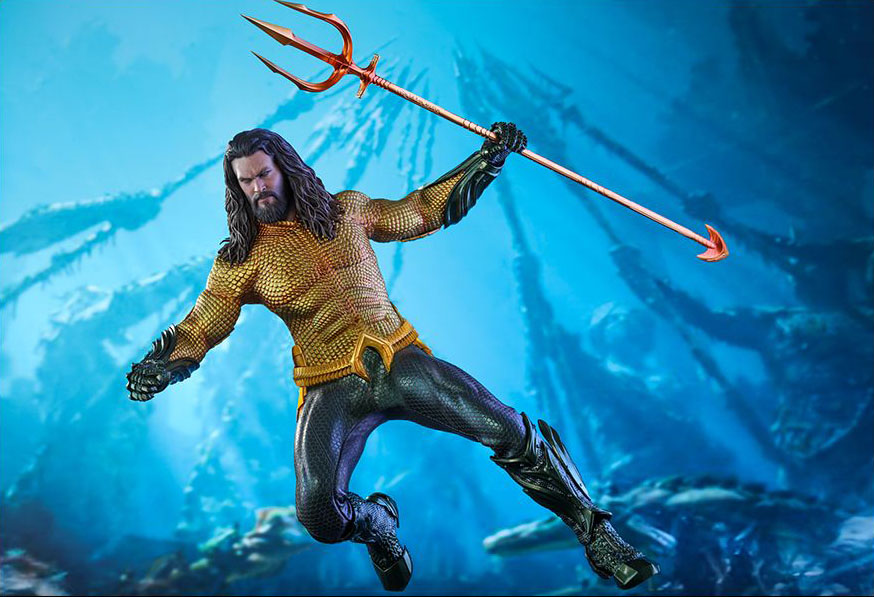 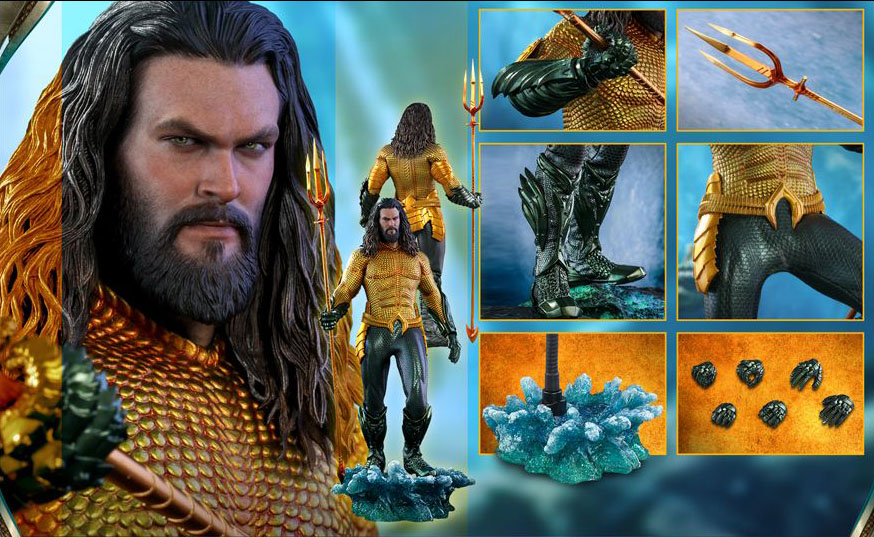 For more information, check out the preview on the toyhaven blog HERE.